Federal judge demands Trump administration reveal how its drilling plans will fuel climate change WaPo (opinion). From the opinion: “Given the national, cumulative nature of climate change, considering each individual drilling project in a vacuum deprives the agency and the public of the context necessary to evaluate oil and gas drilling on federal land before irretrievably committing to that drilling.”

Chastened May seeks to make amends for ‘cataclysmic’ 24 hours FT

How Theresa May Botched Brexit Moon of Alabama. With shout-out to Yves.

Brexit: ‘People just want it all to end’ Irish Times. In Wales.

Ex-UN Human Rights Expert Blasts ‘Manipulation’ on Venezuela: ‘We Are Swimming in an Ocean of Lies’ The Gray Zone

Progress as Venezuela restores power but 27% remain offline Netblocks. This is from March 13. Remarkably, this seems to be the latest coverage. So as soon as — presumably — power is restored, coverage disappears. There’s not even a story explaining how it was done. Odd.

What a Military Intervention in Venezuela Would Look Like Foreign Affairs

‘We all found out by tweet’: Trump’s Golan Heights surprise McClatchy

Executives in custody as China chemical plant explosion death toll reaches 47, with 640 injured South China Morning Post. Oddly, or not, there seems to be no talk of arresting the executives responsible for the petrochemical fire in Houston.

China’s US$7 billion railway link to Laos is almost half done, on schedule to begin service in 2021 South China Morning Post

Trump 2020 budget targets feds’ health and retirement benefits Federal Times. Hollowing out the civil service, starting with Thatcher, sure worked out great for the UK, didn’t it? The whole Brexit process was slick as a whistle!

Bernie Sanders says it’s better to give birth in Finland than the U.S. He’s right. WaPo. Mirabile dictu, a positive post about Sanders in WaPo!

The Atlantic Accused David Sirota of Secretly Working For Bernie Sanders. But Where’s the Evidence? Paste. Club non-member savaged by club members for doing what club members do. Even if you accept what Sirota’s detractors say!

So far, the only candidates to propose anything with bipartisan support are @ewarren, whose plan to break up and regulate big tech was endorsed by Ted Cruz, and @SenSanders, whose war powers resolution to stop the conflict in Yemen drew votes from both sides. Ideas matter.

Another (and Stoller-esque) way to say this is that Sanders and Warren want to govern, and the rest do not.

Have the UBI People Turned to the Dark Side? Benjamin Studebaker

Don’t Make Health Care a Purity Test Paul Krugman, NYT. Another demonstration of what I’ve been saying for some time: Preventing #MedicareForAll is the #1 policy goal of liberal Democrats. Here Krugman runs a bait-and-switch operation for Neera Tanden’s “Medicare for America,” exactly as the same crowd did in 2009-2010. Time passes. Tens of thousands of excess deaths and billions of dollars later…

Pharma & Insurance Gave $43M to the 129 House Democrats Not Backing Medicare for All Grit Post. With handy list of those Democrats, which includes the entire House leadership. It’s all about the Benjamins ?

Who Should Own Photos of Slaves? The Descendants, not Harvard, a Lawsuit Says NYT

Afro-Pessimism and the (Un)Logic of Anti-Blackness Historical Materialism

‘Change Is Closer Than We Think.’ Inside Alexandria Ocasio-Cortez’s Unlikely Rise Time. I just hope AOC’s head can still fit through the door. Bonus antidote: I think it’s time to look in again on Larry the Cat (via): 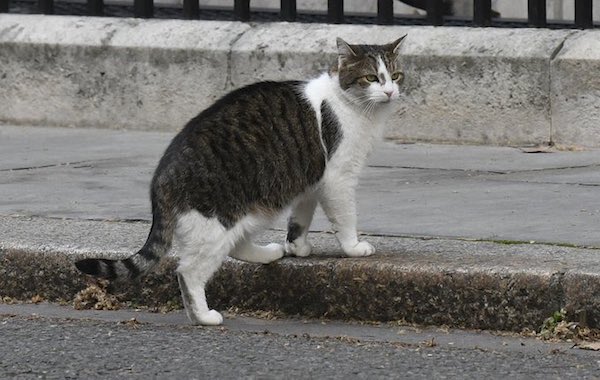 Larry seems not to have completely made up his mind…