Yves here. Obviously, the observations about the pro-carbon-emissions bias in monetary policy applies to the US too. Will someone page AOC?

By Dirk Schoenmaker, Professor of Banking and Finance at the Rotterdam School of Management, Erasmus University Rotterdam. Originally published at VoxEU

As part of this commitment, central banks have begun to examine the impact of climate-related risks on the stability of the financial system (Carney 2015). In monetary interventions, central banks have a long-standing policy of market neutrality, but there is evidence that the market has a bias towards carbon-intensive companies, and so monetary policy cannot be climate neutral (Matikainen et al. 2017). Doing nothing to meet this challenge is a decision that undermines the general policy of the EU to achieve a low-carbon economy.

In a recent paper (Schoenmaker 2019), I propose steering the allocation of the Eurosystem’s assets and collateral towards low-carbon sectors, which would reduce the cost of capital for these sectors relative to high-carbon sectors. A modest tilting approach could reduce carbon emissions in their portfolio by 44% and lower the cost of capital of low-carbon companies by four basis points. This can be done without interfering with the transmission mechanism of monetary policy. Price stability, the primary objective, should remain the priority of the Eurosystem.

As we might expect, the oil, gas, and coal sector has the highest carbon intensity followed by the materials sector (metal producers and construction), utilities, chemicals, transportation (airlines), and automotive (carmakers). The lopsided distribution of carbon intensity shows that carbon emissions are concentrated in a few sectors. 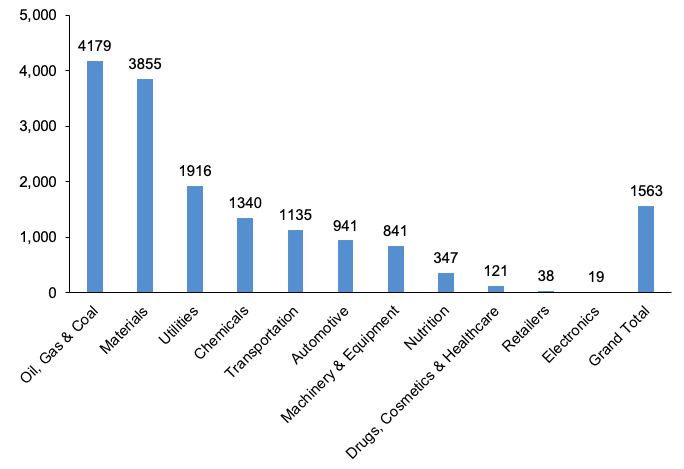 Note: Scope 1, 2 and 3 emissions are included for the 60 largest corporations in the euro area.
Source: Schoenmaker (2019).

In its monetary policy, the ECB – like any other central bank – follows a market-neutral approach in order to avoid market distortions. This means that it buys a proportion of the available corporate bonds in the market. This market-neutral approach leads to the Eurosystem’s private-sector asset and collateral base being relatively carbon-intensive too (Matikainen et al. 2017).

Investment in high-carbon companies reinforces the long-term lock-in of carbon in production processes and infrastructure. We can conclude that the ECB’s market-neutral approach undermines the broader policy of the EU to achieve a low-carbon economy.

Now that central banks have started to examine the impact of climate-related risks on the stability of the financial system (Carney 2015). Why not address the carbon intensity of assets and collateral in central banks’ monetary policy operations as well?

“The Union shall establish an internal market. It shall work for the sustainable development of Europe based on balanced economic growth and price stability … and a high level of protection and improvement of the quality of the environment.”

This broad definition of sustainable economic growth could provide a legal basis for greening monetary policy.

The ECB can only pursue its secondary objectives as long as they do not conflict with its first objective. The proposed tilting approach would not lead to undue interference with price stability. As everyone is a stakeholder in the environment and the climate (Schoenmaker and Schramade 2019), the ECB could contribute to the climate agenda without getting into political discussions.

There is thus a need for political space for the ECB to avoid central bankers making policy decisions. As climate policy is a top priority of European policy on a consistent basis, the ECB can contribute to this secondary objective using its asset and collateral framework of monetary policy operations. The European Commission and Council have repeatedly stated their aim to combat climate change by reducing carbon emissions. European Parliament members have also asked questions to the ECB president about the ECB’s lack of carbon policies (see, for example, Draghi 2018).

I propose a tilting approach to steer the Eurosystem’s assets and collateral towards low-carbon companies (Schoenmaker 2019). The Eurosystem manages about €2.6 trillion of assets in its Asset Purchase Programme, which includes corporate and bank bonds in addition to government bonds.1 In its monetary policy operations, the Eurosystem provides funds to banks in exchange for collateral, which currently amounts to €1.6 trillion. A haircut is applied to the value of collateral, reflecting the credit risk.

This allocation policy can and must be designed so it does not affect the effective implementation of monetary policy. Price stability is, and should remain, the top priority of the Eurosystem.