Yves here. Recall that the UK refused to knuckle under to US pressure not to do business with Huawei, and also appears to have woken up to the fact that the US is prepared to take advantage of UK desperation in the event of a hard or crash-out Brexit. So Helmer’s reading may not be as much of a stretch as it might appear to US readers, who assume that the UK is ever and always America’s poodle.

The Swedish Government’s decision that there is “still probable cause” for Julian Assange to be tried for a sexual offence committed against a sleeping woman nine years ago is a political gift to the British Government. London lawyers specializing in extradition cases say it is now up to Home Secretary Sajid Javid,  the British justice minister,  to decide whether the Swedish charge against Assange is more serious than the US charge of conspiracy to commit computer hacking, filed against Assange in London on April 11. That’s a political decision Prime Minister Theresa May will make, if she remains in power. It’s a move she is believed to have negotiated with the Swedes to avoid a judgement by British judges that American prosecutors are too prejudiced for Assange to get a fair trial in the US.

“When there are competing requests the Secretary of State [Javid] decides which request takes priority,” the source said. “There are various mandatory, though not exhaustive statutory considerations including when requests are received and the gravity of the allegations. Given the respective allegations, the potential time limitation issues in Sweden and the history of the matter I would anticipate that would be a strong factor weighing in favour of the Swedish request.”

Other sources believe extradition to Sweden offers Assange a better than even chance of acquittal on the Swedish charge. The sources also believe that resistance by the Swedish courts to US political pressure for extradition will be greater than Prime Minister May or the British courts want to show.

Until the Swedish Prosecution Authority acted on Monday, Assange was facing the likelihood of up to three years of proceedings before a London magistrate and the appeals courts. That process is a non-political one restricted to the courts and judges; they have shown reluctance in several notable cases to extradite British citizens who are US targets. The likelihood of an independent judiciary ruling against the US was spelled out here.

In Stockholm on May 13 Sweden’s Deputy Director of Public Prosecution Eva-Marie Persson said her agency has decided there is “probable cause for an allegation of rape from August 2010”. They will reopen the old case, she said, and apply for a “ detention order… to Uppsala District Court, as the suspected crime took place in Enköping municipality.”

She confirmed there have been negotiations with British officials. “Julian Assange has been convicted of a crime in the UK and will serve 25 weeks of his sentence before he can be released, according to information from UK authorities. I am well aware of the fact that an extradition process is ongoing in the UK and that he could be extradited to the US. In the event of a conflict between a European Arrest Warrant and a request for extradition from the US, UK authorities will decide on the order of priority. The outcome of this process is impossible to predict. However, in my view the Swedish case can proceed concurrently with the proceedings in the UK.”

Assange may be questioned while in British jail, but only if he and his lawyers consent.  They are not saying if they will.

The Swedish statement reveals that British officials have told the Swedes that although Assange has been sentenced to 50 weeks of imprisonment on the bail violation charge, he may be released after 25 weeks; this six-month period would expire in October.

There have been no comments on the Stockholm announcement by Assange’s British lawyers, Geoffrey Robertson and Jennifer Robinson; their silence since mid-April is highly unusual.

Assange’s colleagues at Wikileaks and in Sweden  have released contradictory statements, indicating they aren’t sure whether the Swedish option is a more favourable one for Assange  than the British.

Swedish law on extradition, according to this government summary, raises two legal questions – does  the indictment federal US prosecutors presented in London last month amount to a crime in Sweden, or is it a lawful act of publication and freedom of speech? And is the US Government pursuing Assange for political reasons?

THE US CHARGE AGAINST ASSANGE

“Extradition is permitted,” according to Stockholm,  “provided that the act for which extradition is requested is equivalent to a crime that is punishable under Swedish law by imprisonment for at least one year. If sentence has been passed in the state applying for extradition, the penalty must be imprisonment for at least four months or other institutional detention for an equivalent period. Thus, extradition requires an offence punishable under the law of both countries (“dual criminality”) that, in principle, is of a certain degree of seriousness.”

The wording of the US indictment accuses Assange of a military offence. “On or about March 8, 2010, Assange agreed to assist Manning  in cracking a password stored on United States Department of Defense computers connected to the Secret Internet Protocol Network, a United States government network used for classified documents and communications, as designated according to Executive Order No. 13526 or its predecessor orders.” The indictment claims the alleged offence  was committed by a serving soldier in a combat zone. “Chelsea Manning, formerly known as Bradley Manning  was an intelligence analyst in the United States Army, who was deployed to Forward Operating Base Hammer in Iraq.”

Identification of the Pentagon as Assange’s target is significant because his alleged offence is explicitly excluded from extradition under Article V Sections 4 and 5 of Sweden’s extradition law: 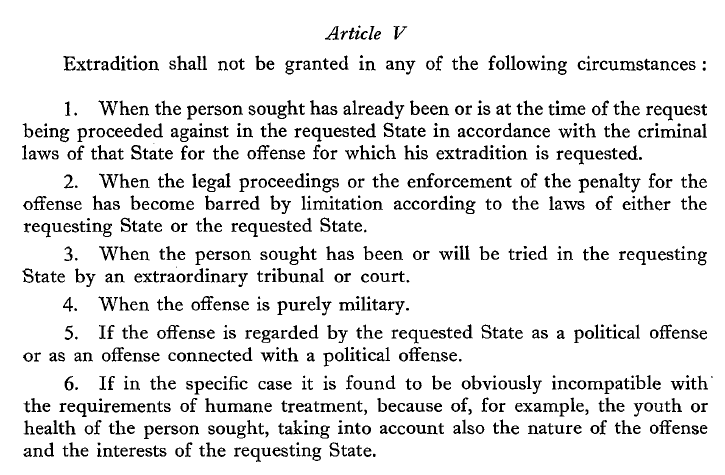 A Swedish Court of Appeal review of the case on Assange’s alleged sexual offences, issued in September 2016, judged that he was still liable for extradition to Sweden on the rape charge, but that once in Swedish custody, he would be covered by Swedish law protections against extradition to the US.  “There may be an impediment if extradition of a person is requested for a political offence”, a three-judge panel ruled.

The Swedish courts have decided that drug smuggling and murder are not political offences covered by Art. V, but espionage is.  Until a month ago, it didn’t occur to the Swedes or to Assange’s defenders that the US prosecutors would  charge him with a “purely military offense”. The Americans came up with that in order to satisfy British objections to extradition on a journalism or political offence.

Earlier reporting of Swedish government assessments indicates that the Swedish courts are likely to look behind the current US indictment to the political context of the American accusations against Assange. 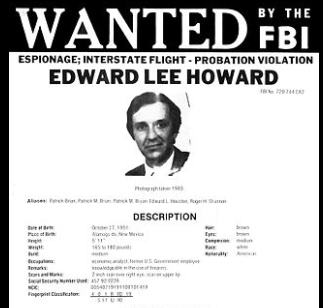 If the Virginia prosecutors were to change their indictment for Stockholm, that would trigger even stronger Swedish resistance, based on the case of CIA agent, Edward Lee Howard (right). On the run from the US he was arrested in Sweden in 1992. He was released, however, on the Swedish judicial ruling that his alleged spying was a political offence under Art.V (5). Howard then flew to safe haven in Moscow. A decade later, he reportedly died in July 2002 after an accidental fall at his dacha.

The British Labour Party has opposed British extradition on the US charges. A letter to Home Secretary Javid, signed by 71 mostly Labour MPs,   the day after Assange was arrested inside the Ecuador Embassy, urged Javid to give priority to the Swedish rape charge over the US claim.  Emily Thornberry, Labour’s shadow foreign secretary, tweeted:  “our priority should be the 2 alleged victims of sexual violence in Sweden & not a ruse to get him extradited to the US as a whistleblower.”

“Between the British, Swedes and Americans right now,” comments a London press source,  “there is a no-love-lost triangle over Assange.  Only the Americans really want him; the British and Swedes don’t want to fight the Americans on Assange’s behalf, but they don’t want to pay the domestic political price of caving in on the press freedom and whistleblower issues.  Everyone is looking for a way out. Maybe the Swedes will follow the Howard precedent; they will acquit Assange and then put him on a plane to Moscow. That’s if the Kremlin agrees.”