Alert reader Rolling Mountain threw two interesting links over the transom the other day, both from the United States Census. The first, policy intern Jordan Misra’s “Voter Turnout Rates Among All Voting Age and Major Racial and Ethnic Groups Were Higher Than in 2014” gives a reading on the 2018 mid-terms. The second, “Voting and Registration in the Election of November 2018,” presents a number of tables, also on the midterms.

I’ve never done any serious work with data (at least in this career), and so I thought I would wring what information I could from these two sources using the crude conceptual tools that I have. (The census has a lot of data tools and apps for combining data, which I think a serious analyst would take advantage of.) Misra’s piece shows that the Democrat midterms success could, in fact, be placed under the liberal Democrat orthodoxy of Ruy Tuxiera’s so-called coalition of the ascendant (the concept that Democrats need only wait for demographics to do their work to win power as a party). The tables show how there are many barriers to registering and voting, which in toto amount to optimizing the exercise of the ballot for income, rather as if property were still a qualification for voting, and the franchise was not really universal.[1] (I’m going to present screen shots of the tables with items of interest labeled and highlighted, but they’re too small, I admit. I’m sorry about that. There’s probably a better way, but I don’t know what it is. The Census makes big, big tables!)

First, let’s look at Misra on voter turnout. Here is the relevant part of Misra’s article: 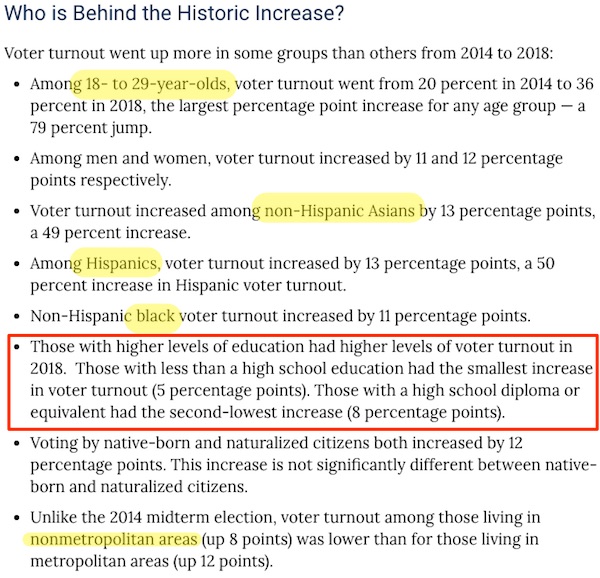 From the highlighted text, you’ll notice that youth, non-Hispanic Asians, Hispanic blacks have all increased, which, given the Democrat victory, jibes with the “coalition of the ascendant” (or “Obama Coalition”) model that I described here:

RUY TEIXEIRA: The &#8220;Obama Coalition&#8221; in 2012 consisted of the minority vote (blacks, Latinos, Asians, and those of other races); the millennial generation; and more educated white voters. If you look at the support rates these groups gave to Obama in 2012, and walk those support rates into the probable representation of these voting groups in 2016, the &#8220;Obama Coalition&#8221; would deliver a third victory for Democrats.

(In the same piece I go on to urge that collection of sintered together demographic cohorts is in no sense a coalition; and if you look at for results from the Democrats’ 2018 victory, you can see that it is in no way comparable to the FDR “coalition,” say. However, you can see how the Democrat leadership would regard 2018 as having confirmed their (Teixeira-driven) priors. They are, after all, in office, if not in power.)

Still looking at Misra, we see the material on education (in the red box). This would Frank’s thesis that the Demorats are the party of the professional classes; given, again, their victory, the Democrats brought their voters out.

Finally, we see that voters in metropolitan areas outperformed those in non-metropolitan areas; so for whatever reason, the Republicans were unable to turn out their voters as compared to their turnout in 2016.

All in all, then, if the 2018 midterms are a dry run for 2020, you can see how Democrats would feel they are sitting pretty. However, I’m unwilling to declare the case for the “coalition of the ascendant” closed, since Misra takes an “identity first” approach to her data; income (as a proxy for class) doesn’t rate a bullet point; indeed the word “income” does not appear in her article. We also have no data on geography at all.

(A): The rich are more likely to register at the DMV than the poor.

(B): The poor are more likely to register at the public assistance agency than the rich.

(C): The rich are more likely to register via the internet than the poor

(D): The poor are more likely to register at government offices than the rich.

Most of this is common sense. Nevertheless, it’s good to have confirmation. I’m also surprised by the DMV result. 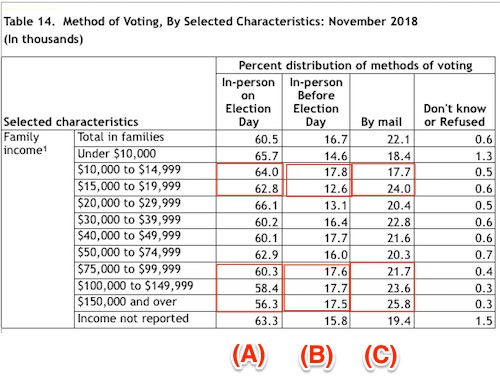 (A): The poor are more likely to vote on election day than the rich

(B): The poor are slightly less likely use early voting than the rich.

(C): The rich are more likely to use vote-by-mail than the poor.

Note that the propensity of the poor to vote in election day makes them more vulnerable than the rich to manipulations like long lines, false information about voting locations, and the provision of insufficient numbers of voting machines. I was also surprised by the “vote by mail” results; I would have thought the poor would take advantage of it.

Finally, “Table 10. Reasons For Not Voting, By Selected Characteristics: November 2018”

(A): The poor are more likely not to vote from illness or disability than the rich.

(B): The rich are more likely to be traveling than the poor.

(C): The rich are more likely to be busy than the poor.

(D): The poor are more likely to have transportation problems than the rich.

(E): The poor are more likely to dislike candidates or feel their issues are not addressed than the rich.

Well, that’s my first foray into voting data. It seems to me that in a functional democracy, we shouldn’t be seeing differences like this — especially the poor not liking candidates or feeling their issues are not addressed. Since voting systems vary wildly across the country, I’m sure you all have experiences to share that will illuminate this data!

[1] The Sanders campaign strategy explicitly involves expanding the base. So we might look as these barriers to registering and voting as a task list for them.