The United States is poised to take a powerful economic hit with the real cost of a disturbed climate beginning to become abundantly clear. Rising sea levels, wildfires, heat waves and extreme weather events are set to cost trillions of dollars over the next couple of decades in crumbling infrastructure, reduced crop yields, health problems and lost labor.

According to Bruno Sarda, president of the Carbon Disclosure Project (CDP) North America, climate change is no longer the distant threat it used to be, but a phenomenon that’s adversely impacting whole economies in the here and now.

Sarda says that climate change is very much underpriced risk in financial disclosures with boardrooms underestimating its full impact. According to a recent CDP report, companies across the globe expect climate change to cost them a staggering $1 trillion dollars over the next five years.

An even more alarming fact: U.S. corporate heads appear to be sleeping behind the wheel more than most, with corporate America more ill-prepared for such an eventuality than others. According to the CDP report, companies in the U.S. are lagging behind their overseas peers with only 65 percent integrating climate risk into their business strategies compared to the global average of 72 percent. 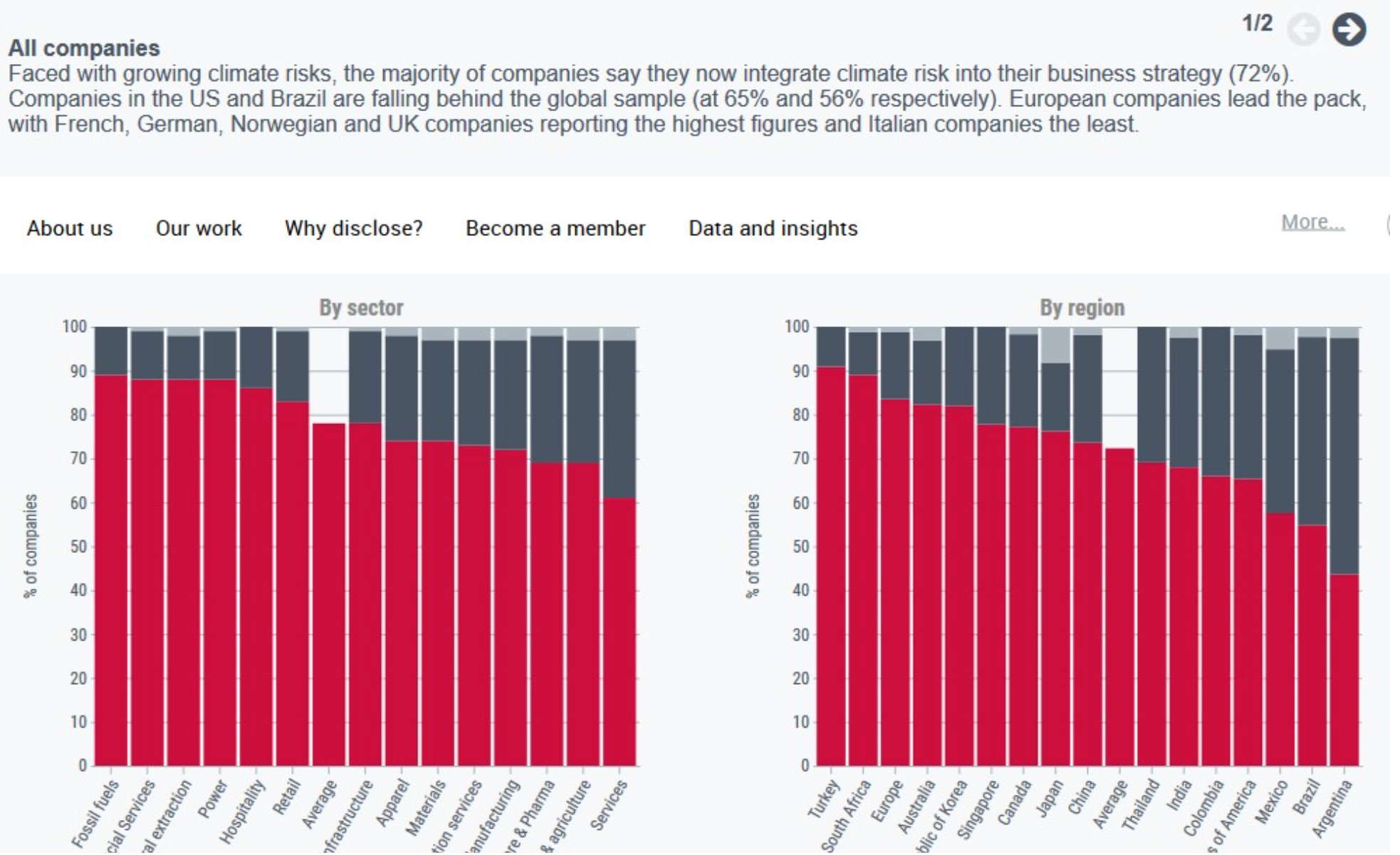 CDP is a UK-based nonprofit that encourages organizations, companies and cities to disclose the impact of climate change on their establishments. The organization’s environmental disclosure concept piggybacked on the 2002 Global Reporting Initiative (GRI) that focused on individual companies rather than whole nations. CDP has proven to be a success, with nearly 20 percent of global greenhouse gas emissions reported through the platform.

The True Cost of a Disturbed Climate

The real cost of climate is beginning to be keenly felt by companies, cities and governments everywhere in the world.

In 2018, the United States sustained an estimated $91 billion in damages resulting from climate-related disasters, including severe storms, inland floods, tropical cyclones, droughts and massive wildfires. Related: What To Expect As Driving Season Kicks Off

CDP has revealed that 215 of the world’s largest companies, including global icons such as Apple, Chase, JPMorgan Chase, 3M and Nestlé now consider climate change a very real threat that’s likely to negatively impact their business within the next five years to the tune of a trillion dollars.

For two consecutive years, the company’s power lines were blamed for sparking deadly wildfires, especially during windstorms. PG&E Corp.’s equipment was blamed for no less than 17 of 21 major fires in 2017 alone, with 5,600 people suing the company leading to liabilities worth $30 billion. Fearing the threat of being implicated in last November’s Camp Fire that devastated Paradise Town and claimed 86 lives, PG&E Corp. decided to file for bankruptcy protection to pre-empt even more lawsuits.

This spring, flooding in the Midwest caused severe damage to grain fields, silos and farm infrastructure. Consequently, Archer Daniels Midland, an agriculture conglomerate, reported that it would incur $50-60 million in damages during the first quarter of the year alone.

Companies have identified a wide range of physical risks arising from climate change including the impact of flooding or rising sea levels on warehouses and distribution centers. They have also enumerated indirect costs including transitioning to a lower-carbon environment including updating facilities and infrastructure to withstand floods and storms while complying with carbon-tax policies that, for instance, are likely to raise the cost of fossil fuels.

Further, they have recognized how failing to address climate change would impact their businesses, with Google’s parent company, Alphabet, saying such an oversight would likely result in lower demand for the company’s goods and services due to a negative public image.

The specter of having to adapt to a rapidly changing environment is not all doom and gloom though, with the CDP reporting that companies acknowledge that there are real benefits to this transition.

Indeed, corporates estimate that opportunities related to climate change could even outstrip the costs, with growth of low-emission products, new fuel sources and energy-efficient cars creating a $2.1-trillion market for a climate-conscious customer base.