Jerri-Lynn here. Trump has pledged to open the Arctic National Wildlife Refuge to fossil fuel drilling, and as this post describes, Interior Assistant Secretary for Land and Minerals Management Joe Balash told an industry gathering last week in Alaska that leases will be offered for sale later this year.

This move will undoubtedly be subject to a legal challenge – which would at minimum delay the administration’s  timeline to offer leases for sale.  US federal district court judge Sharon Gleason in March voided Trump’s 2017 executive order opening Arctic waters to oil drilling. Gleason’s order reinstates existing limits to offshore oil and gas leasing in the Arctic, which includes most of the Beaufort Sea and all of the Chukchi Sea, as reported by Arctic Today in Court ruling on offshore Arctic leasing creates new obstacle for planned Beaufort sale.

A bipartisan group of House members have introduced a bill to amend the 2017 tax bill to remove the section that opened the refuge to drilling, as reported by the Hill in Lawmakers introduce bill to ban drilling in Alaska wildlife refuge. This measure is not a serious obstacle to Tump’s plans.. Even if the full House passed it, the Republican-controlled Senate would likely vote it down; and in the unlikely event that Congress passed the bill, Trump would certainly veto it. 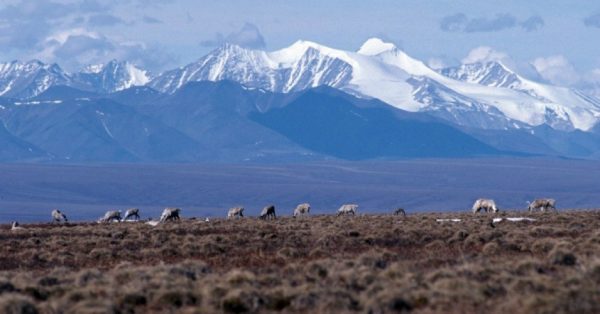 Caribou graze on the coastal plain of the Arctic National Wildlife Refuge in Alaska. (Photo: USFWS/Flickr/cc)

Environmental and indigenous activists are hoping to make sure the Trump administration’s promise to soon sell oil leases in the previously protected Arctic National Wildlife Refuge is never fulfilled.

Republicans laid the groundwork for the fossil fuel leases in the refuge’s 1.6 million-acre coastal plain in a “deplorable” provision in their 2017 tax law. The administration followed through in December with a draft environmental impact statement (EIS) for granting the leases. And with a final draft EIS expected in August, an administration official said Thursday that an oil sale would happen before the year’s over.

Speaking at an oil industry conference in Anchorage, Interior Assistant Secretary for Land and Minerals Management Joe Balash said, “Once we have a final EIS, we will be in a position to issue a record of decision and notice of lease sale. And that lease sale will happen in 2019.”

Among the issues at hand: the land is sacred to Gwich’in; it is the site of the planet’s longest land-based mammal migration—that of the porcupine caribou herd; extraction and exploration would disrupt other wildlife; and it would add fuel to the climate crisis.

A group of teachers and scholars wrote earlier this year about the potential threats, noting that the draft EIS failed “to address the ecological impacts of drilling”:

Fossil fuel development in the Coastal Plain would devastate an Arctic nursery of global significance. It would violate human rights, jeopardize food security, and threaten the health and safety of Indigenous communities. It would contribute to the escalating crises of climate change and biological annihilation. The Arctic Refuge is an irreplaceable ecological treasure.

Given such impacts, oil giants including BP and Chevron were targeted during shareholder meetings this week, where demonstrators demanded they not drill in the public lands. Bank behemoths that would finance the extraction have been targeted as well.

Among those who wanted to deliver a message to Exxon at a shareholder meeting this week was Donald Tritt, a representative of the Gwich’in.

In a statement shared on Twitter—the oil company didn’t let him speak—Tritt said that drilling in the Arctic Refuge would not only affect his family today, “but future generations to come.”

“The cost of drilling in the coastal plains is just too high for my people and the reputation of any company that decide to lease there,” he said. “Leasing in the Coastal Plain is bad for business at a time the world is turning away from fossil fuel[s].”

Donald Tritt, a Gwich’in leader w/ @OurArcticRefuge, traveled from Alaska to Texas to be at the #ExxonAGM today to ask @ExxonMobil to stay out of the Arctic Refuge. Exxon wouldn’t even let him speak. Here’s what he would have said. RT to #StandWithTheGwichin! #ProtectTheArctic pic.twitter.com/NxWUjJm5iP

“Major banks and oil companies will continue hearing from the public and their shareholders loud and clear that the Arctic Refuge is no place for drilling,” said Ben Cushing, a campaign representative for the group, on Thursday.

“Pursuing drilling in this unique wilderness would be bad for the environment, bad for human rights, and bad for their bottom line,” he added. “The public is watching and demanding that these companies commit to staying out of the Arctic Refuge.”

The Wilderness Society, which also opposes drilling the refuge, suggested the leasing decision is a likely outcome given the Interior Secretary David Bernhardt’s record as a former oil industry lobbyist.

“We said it once and we’ll say it again,” the group said. “We can’t trust an oil lobbyist to manage #PublicLands.”