An new working paper by Sebastian Horn, Carmen Reinhart and Christoph Trebesch on China’s foreign lending has some important findings, such as that China accounts for more than 40% of the external debt of 50 developing countries. We’ve embedded the document at the end of this post.

The study is an ambitious undertaking, seeking to track China’s foreign lending from the start of the current regime, in 1949 to 2017. They identified 1,974 loans and 2,947 grants to 152 countries totaling approximately $530 billion, which is over and above China’s purchases of foreign bonds. The authors conclude that the overwhelming majority of the lending is “official,: meaning by the government or government-owned enterprises, despite its opacity. The authors describe half the funding to developing economies as “hidden,” meaning not included in the statistics of the World Bank, International Monetary Fund or Bank of International Settlements.

This data is difficult to compile because China lends to different economies in different ways, and for none of the types of lending is there a central, authoritative data source. On top of that, even where the data is solid, it may not mean what it appears to mean. For instance, former US Treasury official Brad Setser used to post regularly on Treasury’s report on international capital flows and he would regularly attribute most of Treasury purchases attributed to the UK because that’s where the trades were booked, to China.

But the biggest gap is not in coming up with estimates of Chinese purchases of foreign government bonds, which is its main source of lending to advanced economies, but its use of loans, foreign direct investment, and even loans to Chinese construction companies operating abroad, which are its major ways of providing funding to developing economies.

A report in Big Think underscored the significance of this research:

Indeed, economist and author of the report, Tresbesch, recently told Germany’s Spiegel in an interview following the release of the study’s findings, that compiling all of the information was like “a kind of economic archeology.” Their information came from numerous financial world databases, along with some documents provided courtesy of the CIA.

It’s no secret that China would like to keep this type of information occluded from the international scene. Opponents of China’s secretive lending practices fear that Beijing is engaging in predatory debt diplomacy and using their worldwide Belt and Road Initiative to create a new kind of economic colonialism over Africa and other parts of the developing world.

These developing country borrowers aren’t necessarily getting breaks from China. The authors find that the lending is often at prevailing rates and even secured by domestic assets, like commodities. 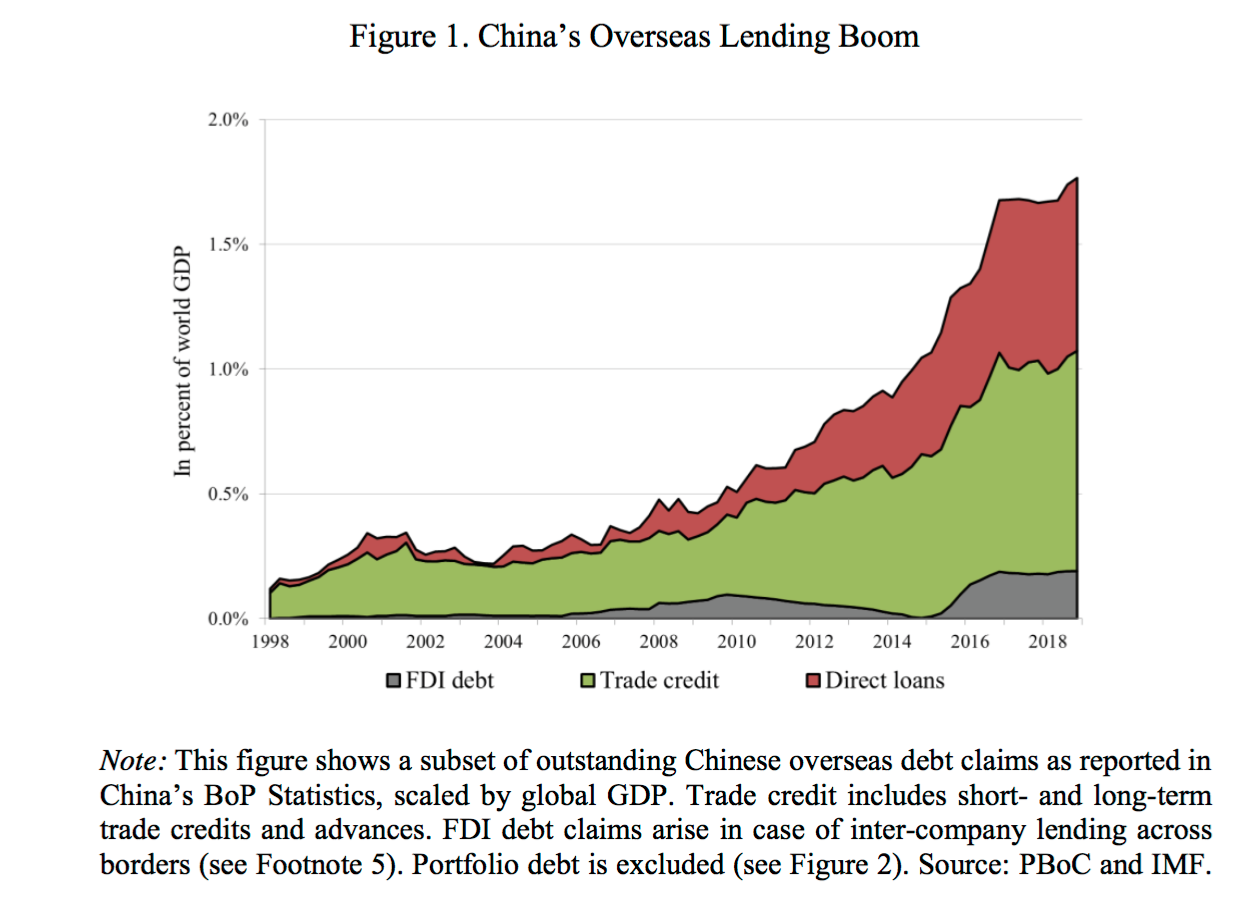 China’s direct loans and trade credits have climbed from almost zero in 1998 to more than 1.6 trillion USD, or close to 2 percent of world GDP in 2018.5 These loans mostly go to low- and middle-income countries. In total, estimates suggest that the Chinese state now accounts for a quarter of total bank lending to emerging markets. This has transformed China into the largest official creditor, easily surpassing the IMF or the World Bank. Beyond that, however, little is known. Among our tasks is to identify these borrowers.

Not surprisingly, Chinese lending reflects strategic rather than financial goals. From the article:

We find that the People’s Republic has always been an active international lender, even in the 1950s and 1960s, when it lent substantial amounts to Communist brother states…

Chinese loans have helped to finance large-scale investments in infrastructure, energy and mining in more than 100 developing and emerging market countries, with potentially large positive effects for growth and prosperity. At the same time, however, the large lending flows resulted in the build- up of high debt servicing burdens. For the 50 main recipients of Chinese direct lending, the average stock of debt owed to China has increased from less than 1% of GDP in 2005 to more than 15% of debtor country GDP in 2017, at least according to our lower bound estimates. For these countries, debt to China now accounts for more than 40% of total external debt, on average….

Over the past decades, official creditors have typically lent to developing countries at concessionary terms with long maturities and at below-market interest rates. China, instead, often lends at market terms (with risk premia), shorter maturities, and partly with collateral clauses that secure repayment through commodity export proceeds, in particular from oil. The latter establishes China’s comparatively high level of seniority among other international creditors (see Schlegl et al. 2019). These practices have a historical analogue. Indeed, China’s overseas loans share many features with French, German and British 19th century foreign lending, which also tended to be market based, partially collateralized by commodity income, and characterized by a close link of political and commercial interests (Feis 1930, Borchardt 1951).

With a view to financial stability, another relevant historical analogue is the lending boom of the 1970s, when resource-rich, low-income countries received large amounts of syndicated bank loans while commodity prices boomed. The Chinese lending flows during 2008 to 2015 share similarities with the 1970s lending cycle, which did not end happily once commodity prices, export revenues, and economic growth slumped across many of the countries that had gone on a borrowing spree. After 1982, dozens of sovereigns went into default, resulting in a “lost decade” in Latin America and elsewhere. The sharp increase in the incidence of sovereign debt restructurings of Chinese debt since 2011 suggests a new wave of debt overhangs…. Debt levels and the debt service burdens in two dozen developing countries are much higher than previously thought.

In other words, if you think the Troika hasn’t been nice to the famed PIIGS, China is in a position to be even less nice. 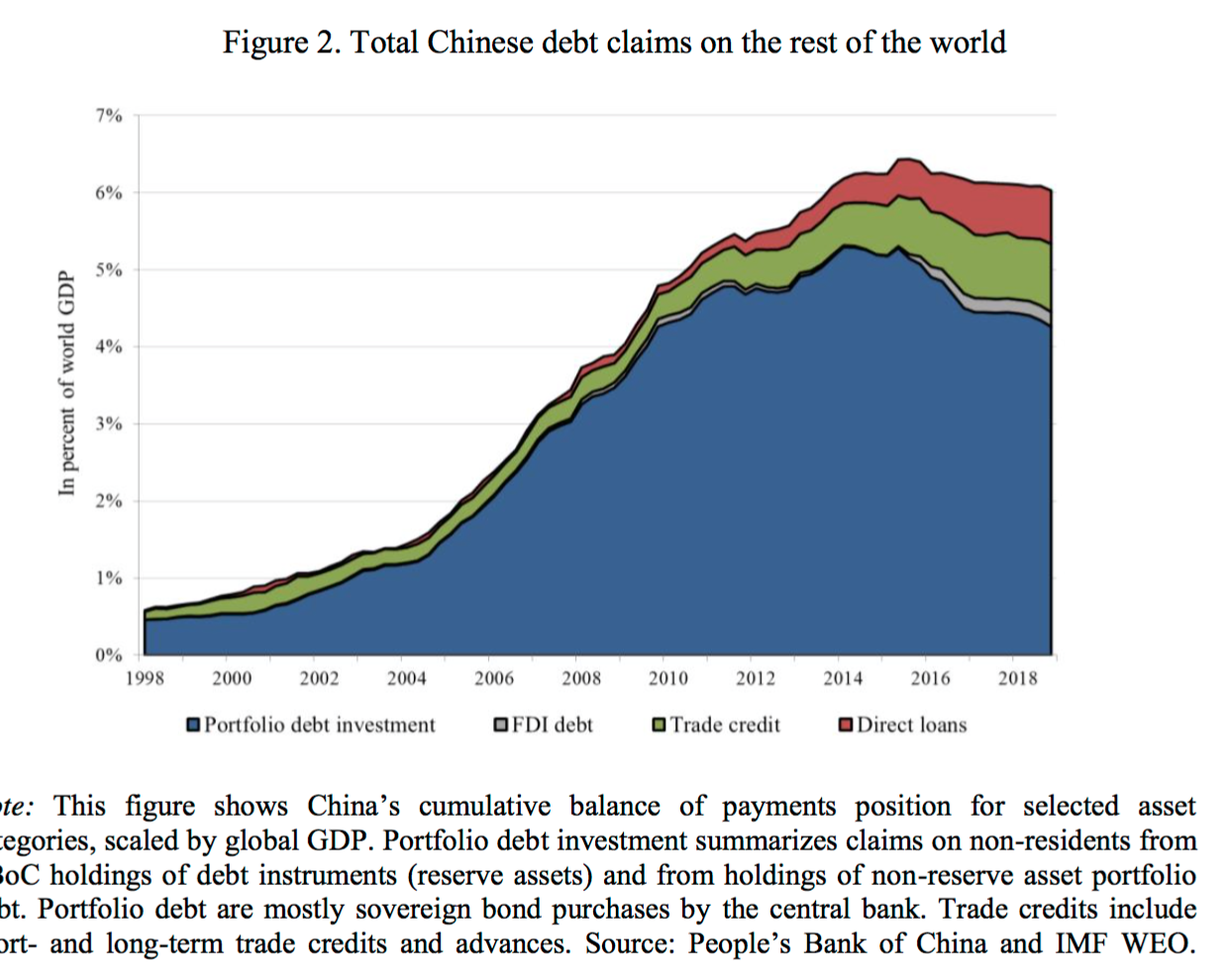 ….as of 2018, the government of China holds more than five trillion USD of debt towards the rest of the world (6% of world GDP), up from less than 500 billion in the early 2000s (1% of world GDP). The main difference to Figure 1 is that we now add portfolio debt holdings (blue area) and combine these with the direct loans and trade credits shown before. If we also add foreign equity and direct investments (not shown), China’s total financial claims abroad amount to more than 8% of world GDP in 2017. This dramatic increase in Chinese official lending and investment is almost unprecedented in peacetime history, being only comparable to the rise of US lending in the wake of WWI and WWII (Horn et al. forthcoming). Indeed, the rapid growth of claims have transformed the Chinese government into the world’s largest official creditor (the largest overall creditor remains the United States). Despite these developments, however, we know strikingly little about China’s capital exports and their global implications.

The paper has an extensive discussion of the distribution of Chinese lending and its magnitude relative to the size of the recipient country’s economy and amount of external credit. For instance: 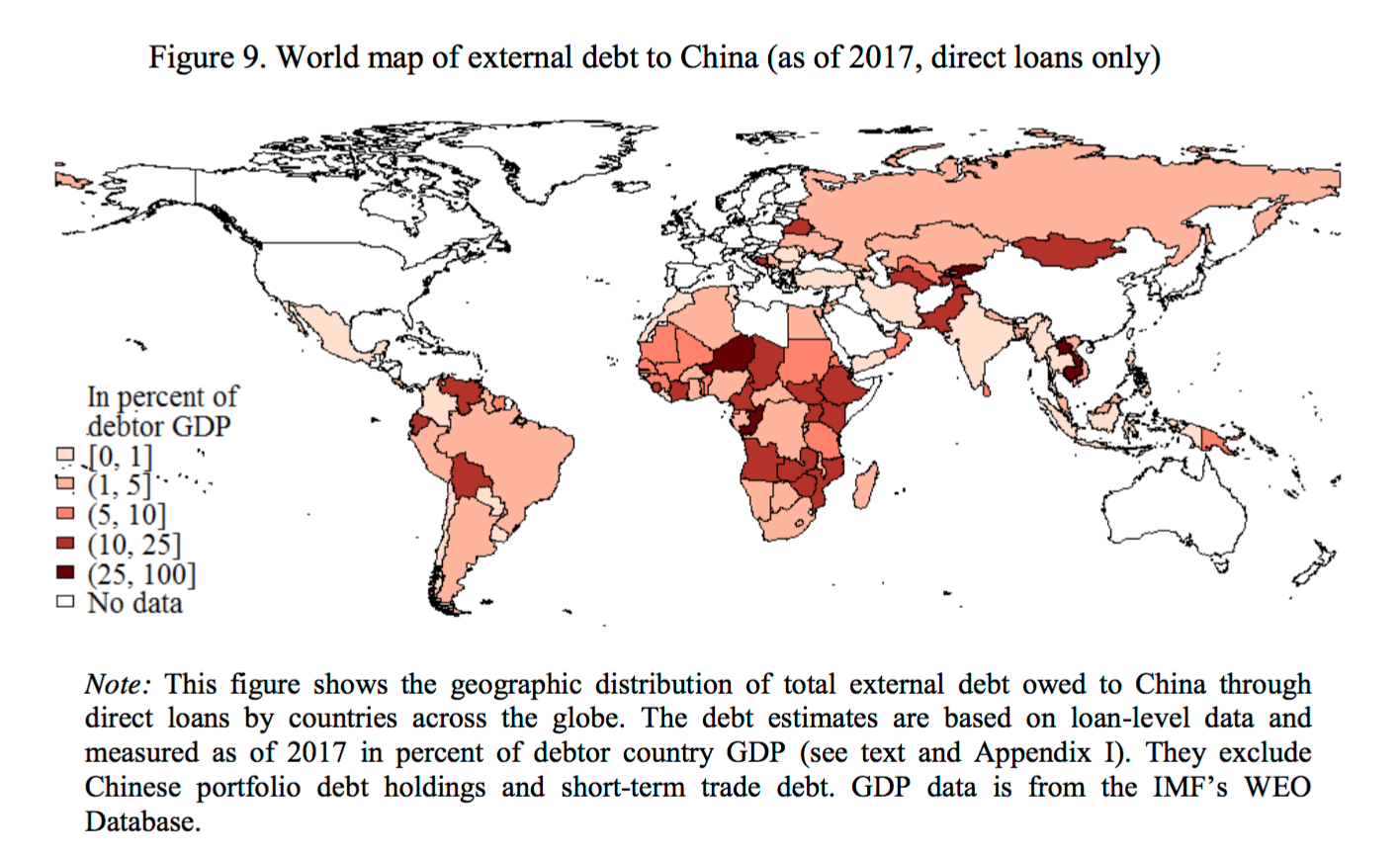 The country group most exposed to China are low income developing countries (LIDCs), many of whom are commodity exporters and some are former highly-indebted poor countries (HIPCs) who benefitted from large-scale official debt relief in the 1990s and 2000s….Another highly exposed group are oil-exporting countries, such as Angola, Ecuador, Niger or Venezuela, as well as countries that are commonly associated with China’s “Belt and Road” initiative (listed in World Bank 2018). For the BRI countries, the median in our data is comparatively low (3.6% debt to GDP), while the average is more than twice as high (8.8% debt to GDP). This reflects the fact that some BRI countries have already borrowed heavily from China (pushing up the average), while others have only recently joined and are not as highly indebted as of 2017, such as countries in Eastern Europe and the Middle East.

The regions most indebted to China are Far East Asia and Central Asia, including highly exposed, small economies that are in geographic proximity to China such as Laos, Cambodia and the Kyrgyz Republic (see Panel B of Figure 8). Next come Sub-Saharan Africa and Latin America, as well as some parts of the MENA (Middle East and North Africa) region. The debt flows to Eastern Europe are smaller, when measured as a share of debtor country GDP, but the amounts of credit to Europe have been growing substantially over the past five years.

There’a a lot more meat in the paper. For instance:

The institutional and legal characteristics of China’s loans also have commercial rather than official characteristics. The loans are extended by a variety of creditors, including more than a dozen public banks and public enterprises that behave like private entities. In addition, the lending contracts often look like commercial loans, with secrecy and arbitration clauses, so that repayment amounts, or any default or restructuring details are kept outside of the public domain.

All of these features are highly unusual for official lending as extended by OECD governments and Paris Club member countries during the post-WWII era. Around 70 percent of Paris Club claims on low-income and emerging countries are in the form of Official Development Assistance as defined by the OECD, i.e. are concessional in character and have a grant element of at least 25 percent. The United States government, for example, typically extends funds for military and economic cooperation in the form of grants rather than loans. The same is true for official creditors in Europe, where the European Stability Mechanism, ESM, lent with maturities of up to 30 years and at almost no risk premia (Corsetti et al. 2018).

Interestingly, 85% of these loans are dollar denominated and about half are secured.

Needless to say, this is an impressive piece of research and I’ve extracted only some of its important findings. I hope you’ll read it in full.