Yves here. This article glosses a bit over the fact that Trump’s main claim about the value of the dollar was that it was overvalued relative to the renminbi. While that was true years ago, it hasn’t been for a while as China has been managing its “dirty float” to let the renminbi appreciate versus the dollar. Trump correctly got a lot of heat from Serious Economists when he asserted that the level of the dollar was a significant factor in the US trade deficit with China.

Trump has been very vocal about his dislike for the Fed’s hawkish policies, repeatedly drumming up the fact that higher interest rates lead to an overly brawny dollar and slow down the economy.  Trump has even, reportedly, asked White House aides to explore ways to weaken the currency in order to boost exports and boost economic growth.

Trump’s open criticisms have mostly been viewed as unconventional going by the central bank’s presumption of independence, though, of course, no president wants to be associated with an economy weakening under his or her watch.

And now, the president’s call for lower rates and a weaker dollar have just have found fresh impetus from an unexpected source—the IMF now says the American currency is 6%-12% overvalued.

Incidentally, the Bretton Woods Institution has also found that the euro – the second-most commonly used currency in international trade–is undervalued by 8%-18%  relative to the German economy, the region’s largest.

But in a potentially big knock on Trump’s assertions against Beijing, the IMF says the Chinese yuan appears to be fairly valued, though it does concede that there are ‘large uncertainties’ around the currency that could mean it’s undervalued by 11.5 percent or overvalued by up to 8.5 percent. 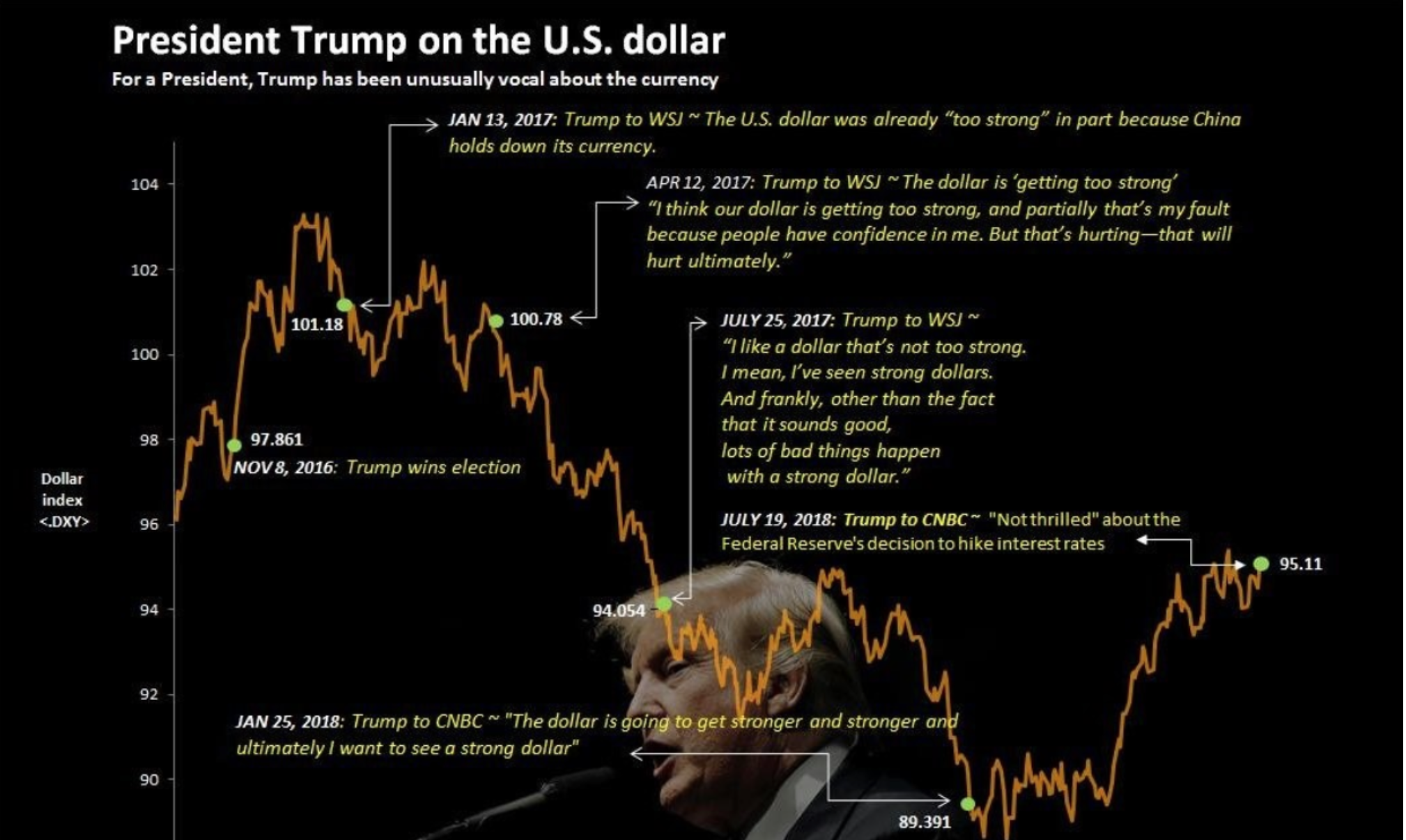 You can expect Trump to take full advantage of the fresh ammunition that the IMF has just handed him–the fact that he has never been a big fan of multilateral institutions such as the IMF or the World Bank notwithstanding.In a tweet earlier this month, Trump accused China and Europe of manipulating their respective currencies in order to gain unfair advantage of the U.S.

And, you can hardly blame him for going out on a limb to stop real or perceived injustices.

The dollar has strengthened considerably over the past decade, with the dollar index–a measure that pits the greenback against a basket of six major currencies (euro, Japanese yen, Canadian dollar, British pound, Swedish krona and Swiss franc)–climbing 26 percent over the timeframe. 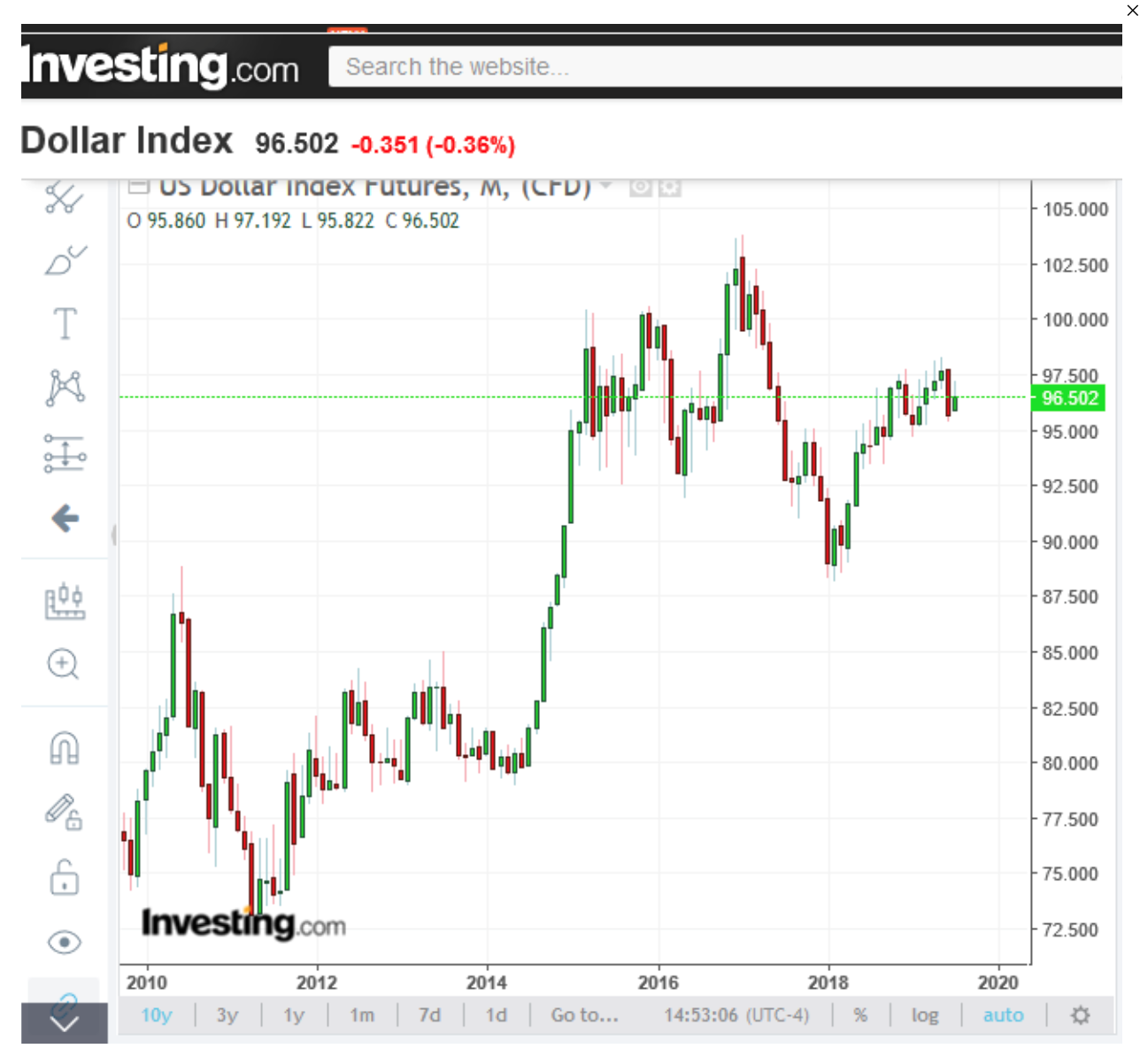 There are several plausible reasons why the U.S. dollar has become so bullish.

First, the Fed’s expansive monetary policy during the post-crisis era saw it constrain the supply of the currency which inevitably led to an increase in value.

Second, the ECB countered by doing just the opposite while political instability in the region further helped to weaken the currency. Bear in mind that the euro makes up about 58 percent of the dollar index, making it, by far and wide, the most significant currency in determining the dollar’s trajectory. The yen is a distant second with a weight of 14 percent.

Third, forex traders have also played a significant role by using leverage to further weaken the euro and strengthen the dollar.

And, finally, there’s always the distinct possibility that eurozone nations and China have been actively manipulating their currencies as Trump claims.

For its part, Beijing has vowed to stay away from a currency war and said it does not plan to use a weaker yuan as a stick in the ongoing trade war. Suspicions though have continued to run high given Beijing’s checkered history as far as currency manipulation goes.

The yuan’s value has declined markedly against the dollar ever since Trump slapped hefty tariffs on Chinese exports. Goldman Sachs has argued that the declining value of the yuan on a trade-weighted basis is big enough to blunt Trump’s tariffs. A weaker yuan is an attractive trade-off for the country because it helps goose a weakening economy without creating excessive inflationary pressures. Moreover, it’s irrational to expect Beijing to suddenly stop manipulating its currency even as its economy continues to slow and chances of solid trade deal increasingly looking tenuous.

Nevertheless, Beijing has severally received a clean bill of health from independent bodies.

Despite Trump continually pressuring the Treasury to declare China a currency manipulator, it has desisted from doing so citing lack of clear evidence. Instead, Italy, Ireland, Vietnam, Malaysia and Singapore have been found guilty of the vice in the latest audit while Germany remains on the watchlist.