Yves here. I suspect the results of this study on CEOs won’t be all that surprising, but it’s good to have data, as opposed to guesses or isolated observations.

With power over corporate resources as well as stature and prestige in the economic system, public-company CEOs to have sizeable influence over policy and political decisions. This column examines the political donations of more than 3,800 US CEOs of S&P 1500 companies to analyse their political preferences over time, across industries and geographical regions, and by gender. It shows that US public company CEOs have a significant preference for Republicans, who may benefit from public companies’ expanded freedom to spend money on politics.

CEOs of public companies preside over a significant portion of the American economy. Their power over corporate resources, as well as their stature and prestige in the economic system, enable public-company CEOs to have sizeable influence over policy and political decisions.

In the famous 2010 case of Citizens United versus Federal Election Commission, the US Supreme Court allowed corporations to make unlimited independent political expenditures. This created an enormous potential for corporations to influence elections and policymaking. Under the current laws, however, shareholders have little or no say in how these political expenditures are made (Bebchuk and Jackson 2010). Management, and CEOs in particular, decide which political candidates the corporation will support.

Furthermore, CEOs have acquired an important role in the policy discourse. They are active and influential participants in the policy debate (Chatterji and Toffel 2018); they often act as nonpartisan advisers to US presidents and policymakers (Gara 2016, Meyersohn 2017); and they are directly (and successfully) involved in policy advocacy through their most prominent association, the Business Roundtable, which was established in 1972 for the explicit purpose of formulating and advocating policy views.

For these reasons, we believe that public-company CEOs have significant influence over policy and political decisions and that understanding the political preferences of CEOs is valuable to comprehend the inner dynamics of US policymaking and politics. In a new paper (Cohen et al. 2019), we study the political preferences of CEOs and how they change over time, across industries and geographical regions, and based on CEO gender.

To study the political preferences of CEOs, we analyse political donations of more than 3,800 individuals who served as CEOs of an S&P 1500 and information on corporate CEOs contained in ExecuComp to compile a comprehensive database of S&P 1500 CEO political donations. Our matching algorithm relies on first, middle, and last names and the distance of the donor’s home address from the company headquarters. As a result of this process, we have data on the political contributions of 3,810 CEOs over 18 years.

To identify the political preferences of CEOs, we measure the extent to which contributions given by any CEO ultimately benefit Republican or Democratic candidates. This analysis is simple. Contributions are generally made to political committees and while some of these committees have a clear affiliation with a political party or a candidate within that party, many do not. If a CEO donates to an unaffiliated committee, we measure how this committee spends its funds and attribute this spending to the CEO.

We define a CEO’s political preference in a given year based on an examination of the CEO’s political contributions during the four years that precede, and the three years that follow, that given year. Thus, we calculate for each CEO the fraction of their contributions going to each of the two main parties during this eight-year period. Basing our analysis on a time window that is somewhat shorter or longer would result in qualitatively similar results.

Our study finds that public-company CEOs consistently prefer Republican candidates. Most CEOs donate to both Democrats and Republicans. However, even for CEOs who donate to both parties, how they split the contributions between the two parties can display partisan preferences.

Figure 1 shows the full probability distribution of partisan preferences in CEO donations. We refer to a CEO as supporting a main party if the fraction of contributions by the CEO to that party exceeds a certain fraction of the total contributions made by that CEO. If neither donations to Republicans nor those to Democrats exceed the threshold, the CEO is classified as ‘neutral’. 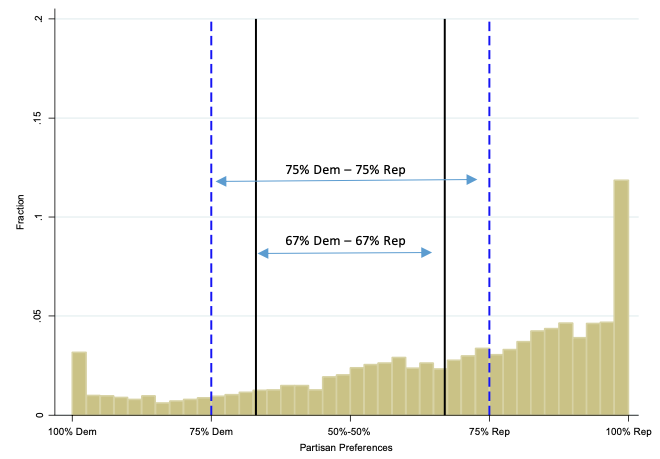 Republican-leaning CEOs are about three times as many as Democratic-leaning CEOs, regardless of whether we classify the political preferences of CEOs based on a threshold of 60%, 67%, or 75% of the total donations.

Given the tendency of CEOs to support Republicans, it is natural to ask how this pattern looks over time. Figure 2 displays the partition of CEOs between Republicans, Democrats, and neutral, for each year during the period 2000-2017 for the full S&P 1500 sample. The figure shows that, notwithstanding some fluctuations in the Republicans/Democrats ratio, Republican CEOs significantly outnumbered Democratic CEOs at every point in time. 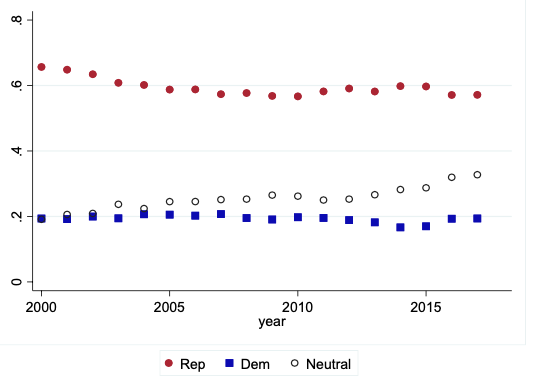 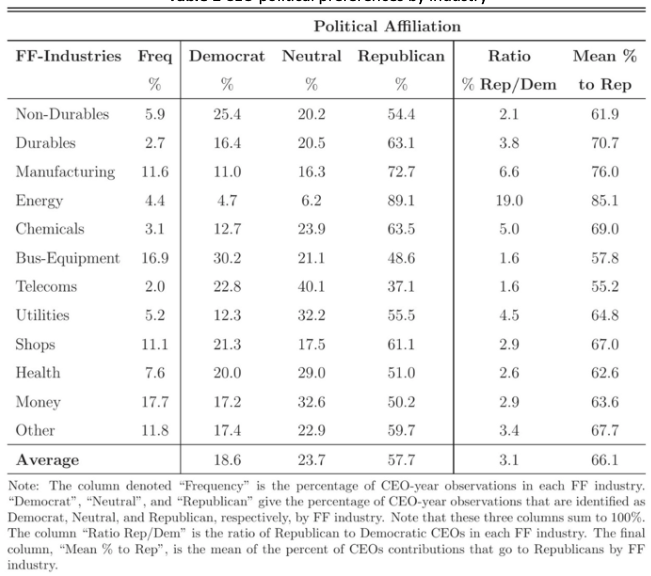 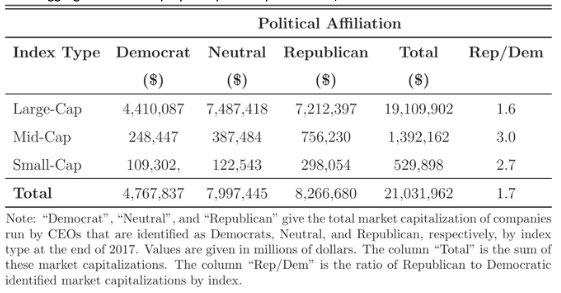 Finally, we use the CPA-Zicklin Index score (CZI score) as a metric to measure the quality of corporate disclosure on political contributions and to test whether there is a statistical relationship between the political preferences of CEOs and their companies’ quality of political spending disclosure. We study the total CZI score as well as its three sub-scores for disclosure, oversight, and policy.

Our study documents how public-company CEOs have a significant preference for Republican candidates. These findings provide useful insights about the potential spending patterns of public companies and imply that, to the extent that public companies would over time take substantial advantage of the expanded freedom to spend money on politics established by Citizens United, Republicans could disproportionately benefit from this freedom.

The data also cautions against the characterisation of CEO committees or CEO associations as politically neutral or nonpartisan. Although policy and political positions should be assessed on their merits, regardless of the identity or political leanings of their advocates, the frequent characterisation of CEO groups and committees as bipartisan or politically balanced might be misleading for many people. In fact, our findings show that public-company CEOs disproportionately display pro-Republican preferences.

These findings should inform the public discourse as the debate over corporate America’s role in campaign finance continues.