Yves here. I don’t mean to be a nay-sayer, but having developed major orthopedic problems after an accident, I find it hard to be cheery about getting old. This article makes a passing mention of financial stress among the elderly. A new story in the Financial Times, adding to a 2018 study Greying of US Bankruptcy, chronicles the rising level of indebtedness. Key sections:

In 1991, over-65s made up only 2 per cent of bankruptcy filers, but by 2016 that had risen to more than 12 per cent, says Robert Lawless, one of the authors of the report and a professor at University of Illinois College of Law. (As about 800,000 households filed for bankruptcy that year, this works out as approximately 98,000 families or about 133,000 seniors, since many file jointly as couples, he adds.) Over the same period, elders grew as a percentage of the US adult population too, but only from 17 per cent to 19.3 per cent…. 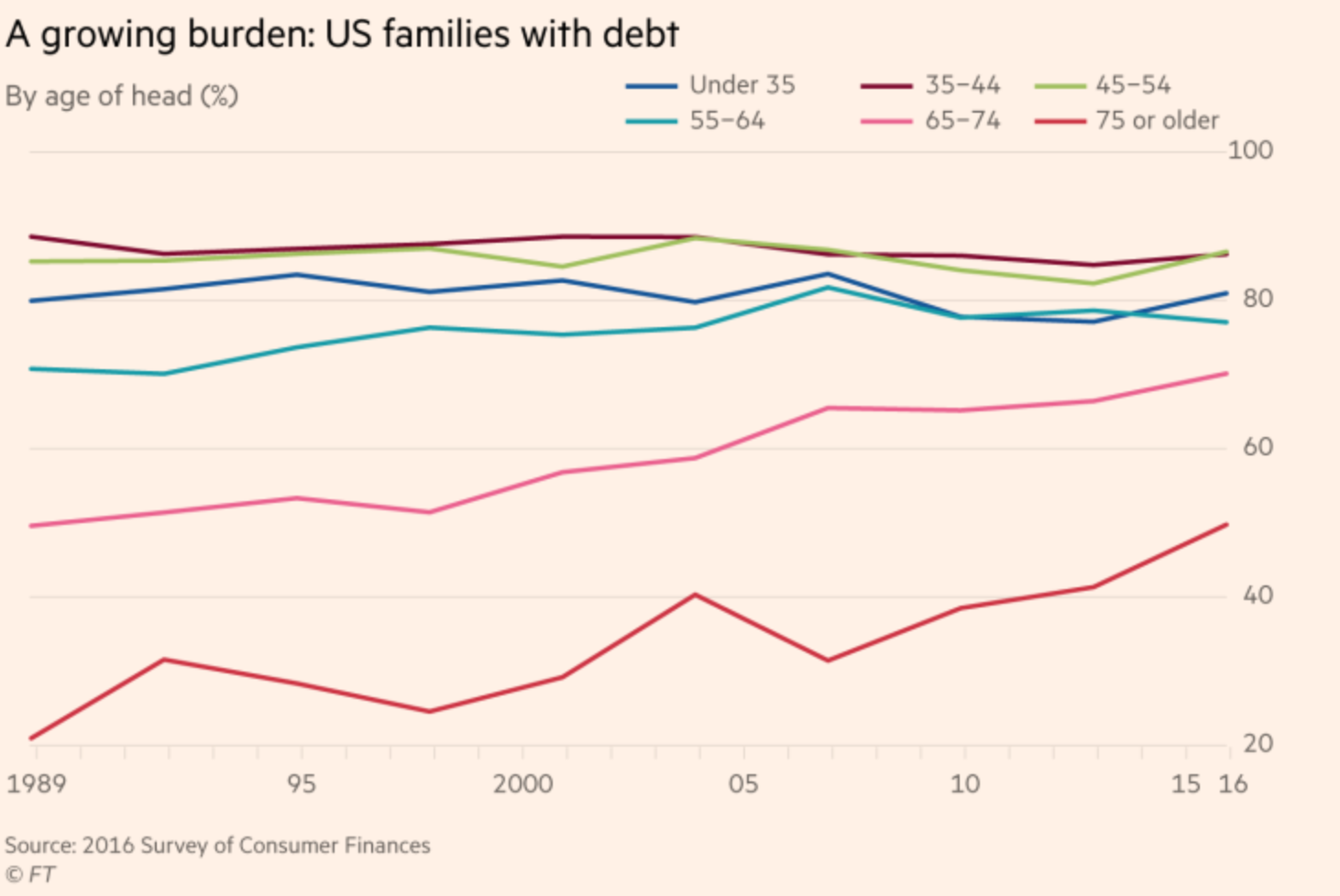 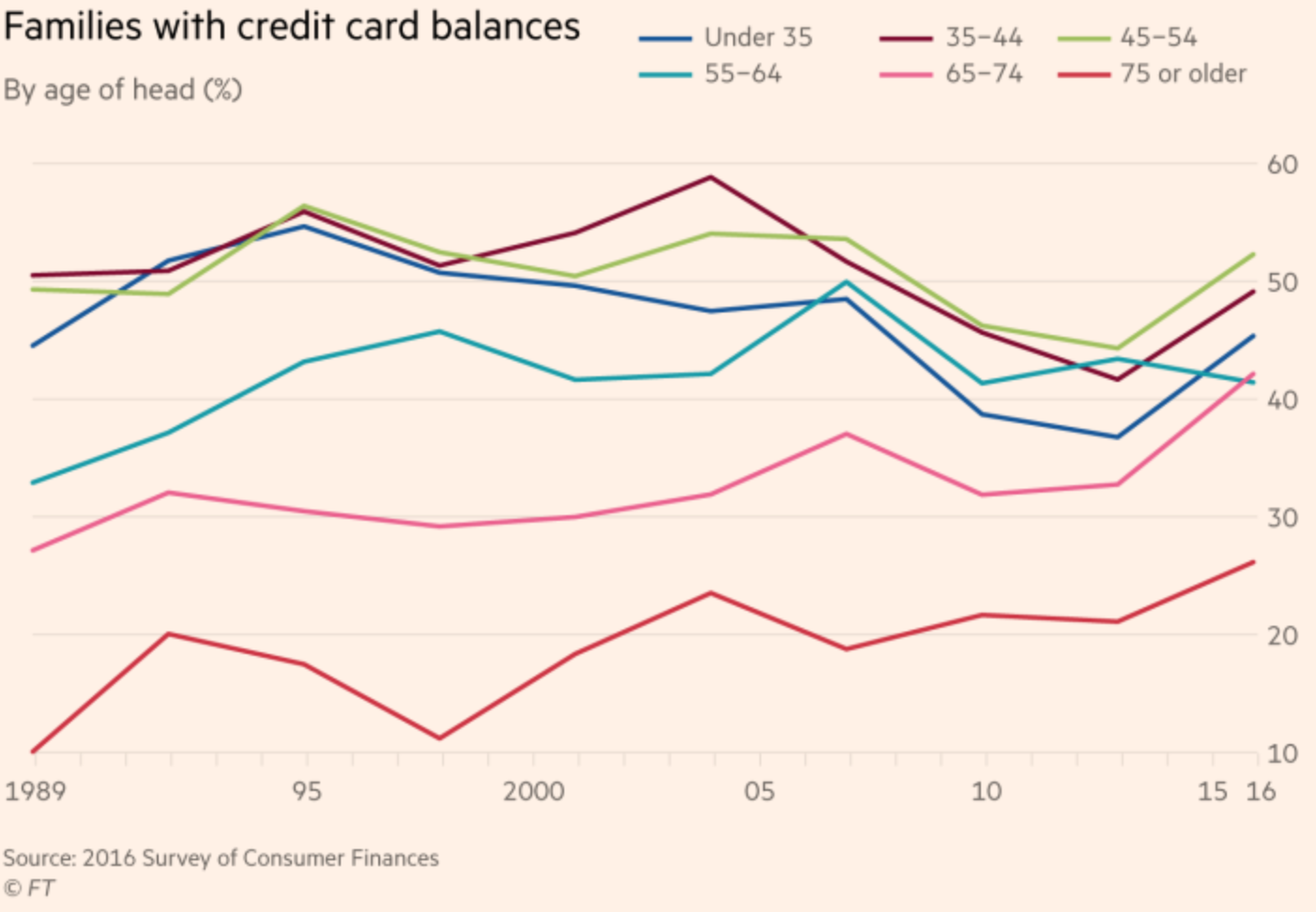 In 1989, only one in five Americans aged 75 or older were in debt; by 2016, almost half were, according to the most recent US Federal Reserve survey of consumer finances. The rise in senior debt comes at a time when the wealth gap between rich and middle-class or poor Americans is at an all-time high, according to a study last year by the Pew Research Center.

By 2016, the wealth of upper-income Americans had more than recovered from the post-2008 recession, but the wealth of lower- and middle-income families was at 1989 levels, highlighting the long-term rise in income inequality in the US.

As these low- to middle-income families age, many are being pitched into debt-burdened retirement by several structural trends, including the decline of trade unions, with their power to negotiate real wage increases, good pensions and retiree healthcare packages; the disappearance of defined benefit pension schemes; steep healthcare inflation; and a sharp rise in middle-class families helping to pay for children to go to college.

By Valerie Schloredt, the the books editor for YES! Originally published at Yes!; cross-posted from openDemocracy

So I’ll be out in public, maybe ordering coffee, and someone I don’t know will address me as “sweetie.” I’m a 60-year-old woman, and I look my age. Because people haven’t called me “sweetie” since I was about 5, I’m thinking this is an age thing. That seems more obvious when a stranger ironically addresses me as “young lady” in situations where “excuse me,” “hello,” “hey, you,” or “pardon me, ma’am” would do just fine.

Such micro-aggressions, conscious or not, don’t just target older women. A friend my age who sports a distinguished gray beard was sweating through the last stretch of a half-marathon when a young guy in the crowd yelled from the sidelines, “Way to go, old dude!”

For decades, ageism has been one of the “isms,” along with racism, sexism, and ableism, that are unacceptable in progressive discourse and illegal under U.S. anti-discrimination law – at least in theory. Yet ageism against older people remains the most unexamined and commonly accepted of all our biases.

Look at media, from advertising to news, that portray aging almost exclusively in terms of loss – of physical and mental abilities, rewarding work, money, romance, and dignity. That sad and often denigrating picture leads us to fear aging. To distance ourselves from our anxiety, we label older people, regard them as “the other,” and marginalize them, perhaps most obviously in casual, patronizing remarks to strangers.

I’m seeing ageism a lot more clearly now that I am subject to it. So I welcomed Ashton Applewhite’s encouraging new book, This Chair Rocks: A Manifesto Against Ageism. Applewhite, who has been speaking and blogging on the subject for several years, takes a particularly empowering approach by discussing ageism from the perspectives of both the personal and the political, debunking myths along the way. Take the “deficit model” of aging – the common assumption that getting older is all loss and no gain. In reality, we humans retain all sorts of qualities and abilities as we age.

We’re also adaptable. That’s a quality that can have unexpected benefits, like the “U-curve of happiness” described in a paper published by the National Bureau for Economic Research. The authors found that older people report being happier than do people in middle age. We deal with declines, of course, but we may actually get better at some things, like discarding superficial values, solving emotional problems, and appreciating life’s pleasures.

That bonus in emotional resilience may come in handy, because we’re aging in an economically, politically, and socially volatile era. According to Applewhite, poverty rates for Americans older than 65 are increasing and 50% of the baby boom generation feel they have not saved enough to create sufficient income should they live into their 80s and 90s. And while employment discrimination against older people (40 and up) is well known but difficult to prove, half of the boomer generation doesn’t see how they will be able to retire at all, Applewhite reports.

In her new book, Downhill from Here: Retirement Insecurity in the Age of Inequality, Katherine S. Newman looks at the current economic landscape for older Americans and concludes, “Retirement insecurity is an increasingly serious manifestation of the vast inequality that is eating away at the social fabric of America.” What is now a bad situation for many boomers could be even worse for Gen Xers and millennials when their turns come.

So here we are, becoming more vulnerable over the years in a system that already treats people as expendable. Applewhite, for all her good-humored tone, calls out that system as global capitalism, as when she critiques the intergenerational competition narrative. The image evoked is of greedy oldsters sucking up jobs and houses and Social Security and Medicare, leaving nothing for the next generation.

It’s easy to be pulled into the generation blame game, abetted by underlying ageism, and to forget that economic systems are not inexorable phenomena like gravity or time; rather, they are the result of choices. In fact, rather than regard older people as leeches, we should remember that economic interdependence is intergenerational. Older people are an intrinsic part of society. Most of them have supported younger and older people in whatever ways were available. And whether working or retired, they buy products and services and pay taxes and contribute labor, support, and finances to their families and communities.

Applewhite caps her manifesto with recommendations that strike me as parts of what could be a Great New Deal for Age. It could start with more flexibility in employment so people could have longer careers, with more time out for training, exploration, and family. Resources would be put into accessible design for public spaces, as well as programs to support mobility for people across the spectrum of age and ability. That would facilitate their inclusion in community, and they would be in good shape to take part because of improvements in health policy, clinical practice, funding, and research. And if, toward the end of life, more intensive care were needed, workers and family members doing paid and unpaid care work would be fairly compensated or supported.

The truth is that improving systems to include older people would improve access and prosperity and quality of life for everyone.

All that calls for a new movement against age discrimination and organizing to get socially responsible representatives and policymakers into office. It also requires the sort of consciousness-raising and agitation that is now going on around the issues of race, justice, climate, and gender. Waking up to the real harms of ageism and refusing to feed the beast with our words and actions is the first step. The good news? The job is open to anyone and everyone, regardless of age.