A decade ago, two judges in Wilkes-Barre, in the US state of Pennsylvania, accepted more than $2 million in bribes as part of a scheme to benefit one private prison facility over its competitor, as well as funnelling hundreds of juvenile delinquents into the jail, often for trivial offenses. The ‘kids for cash’ scandal and the ensuing investigation brought the problems with a for-profit private prison system to the public’s attention.

Aside from potentially compromising the integrity of the judicial system, the scandal raised the question of whether the increase in the presence of private prisons in the US since the mid-1980s bore any relation to the simultaneous increase in the size of the nation’s prison population. According to the Bureau of Justice Statistics, more than 2.2 million people were incarcerated in federal, state, and county prisons in 2014. In the roughly three decades since the first private prison in the US opened in 1984, the imprisoned population increased by 194%, while the overall population increased by only 36%.

There is no doubt that private prison operators have spent money attempting to influence sentencing policies and help elect officials who would in turn help the industry. In 2016 and 2017, private prisons and the companies that serviced them spent $12.4 million on lobbying state lawmakers or state campaigns, according to the National Institute on Money in Politics.

There is also no doubt that private prison operators have an economic interest in harsher sentences. The Corrections Corporation of America’s 2014 Annual Report includes the following warning: “The demand for our facilities and services could be adversely affected by the relaxation of enforcement efforts, leniency in conviction or parole standards and sentencing practices.”

Still, the fact that private-prison operators and investors have an interest in seeing more defendants convicted in court is not itself evidence that private prisons have successfully influenced judges’ sentencing decisions.

Effect of Private Prisons on Incarceration

As part of our research on state courts (Poyker and Dippel 2019), we created a database that geo-located public and private prisons in the US dating back to the opening of the first state private prison in 1984. We gathered state courts’ data on sentencing over the past three decades from Alabama, Arkansas, Georgia, Kentucky, Maryland, Mississippi, Nevada, North Carolina, Oregon, Tennessee, Texas, Virginia, and Washington.

Our research focused on state courts for two primary reasons. The first is that because federal courts send prisoners anywhere, no spatial link exists between sentencing and the presence of private prisons at the federal level. The second reason is that the vast majority of criminal cases in the US are heard in state circuit courts.

For purposes of statistical identification, our research examined changes in sentencing decisions in felony cases within 237 circuit court pairs that straddle state borders. This identification strategy relies on monthly within-state changes in private prison capacity (which can be driven by the opening or closing of a private prison or the privatisation of a public one), and on comparing changes in sentencing only within neighbouring trial court pairs that straddle a state border. By focusing only on such pairs, we can account for local heterogeneity and local trends in unobservables; in our case, unobservables include criminal activity, policing, and local demand for sentencing.1

Our core finding is that doubling private prison capacities in a state increased sentence lengths in that state’s courts by 1.3% (or 18 days) compared to sentence lengths dispensed by adjacent courts in other states. There is no evidence that the presence of private prisons changed the likelihood of a defendant being sent to prison. This baseline effect is robust in magnitude and statistical significance to the inclusion of meaningful control variables as well as to different variations in spatial, time, and judge fixed effects. 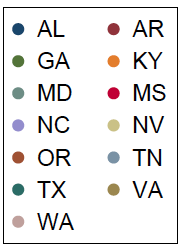 The assembled data affirm existing findings that strong racial biases pervade the prison system, a conclusion supported by previous research (Abrams et al. 2012). However, our research does not suggest that an expansion of private prison capacity exacerbated these biases, owing either to an overall increase in incarceration rates or to harsher sentences for minorities or youth.

Using these data, we argue that private prisons may influence court sentencing through three plausible channels. The first channel is lobbying: private prison companies lobby legislators for harsher sentencing laws and guidelines. Several politicians have recently come under public scrutiny for accepting large campaign contributions from private prison corporations (Brickner and Diaz 2011). A second channel is ‘judicial capture’: private prison companies attempt to directly influence judges through campaign contributions or revolving door promises. The third channel is ‘fiscal constraints’: in most states, private prisons are required by law to be a fixed percentage cheaper than state facilities (Mukherjee 2015); judges may take the lowered fiscal burden of incarceration into consideration when making sentencing decisions. The idea that lower incarceration costs could induce judges to order harsher sentences may be surprising, but evidence suggests that this is the case, at least in the US (Ouss 2015).

Because our identification strategy cannot causally associate the potential effect of private prisons with legislative changes at the state level, our work conditioned-out the ‘legislative capture’ channel through state-year fixed effects. Statistical identification comes from within-year variation in state-specific private prison capacities. This does not rule out the existence of ‘legislative capture’, but means that it cannot drive our baseline results.

To glean evidence for potential ‘judicial capture’, we bring to bear evidence on judicial elections (Poyker and Dippel 2019). Judges in most states are elected officials, and existing evidence suggests that electoral cycles influence their sentencing, with sentences becoming harsher closer to re-election dates, a fact commonly attributed to the electorate’s demand for harsher sentences (Huber and Gordon 2004, Gordon and Huber 2007, Lim 2013). In the presence of ‘judicial capture’, we expect private prisons to have the most influence over judicial decisions at the peak of the electoral cycle, i.e. closer to elections. Perhaps surprisingly, there is no evidence that electoral cycles respond to state-level changes in private prisons.

To glean evidence for the ‘fiscal constraints’ channel, we calculate the legislated minimum cost savings (per bed) that states require of private prisons. While these legislated savings are endogenously determined in negotiations between states and private prisons, they can be viewed as econometrically exogenous to over-time variation in judges’ sentencing decisions. The results show that sentence lengths respond more to an expansion of private prison capacity when the legislated financial savings to the state are higher.

In summary, our evidence suggests that private prisons affect criminal sentencing. The estimated effects are small, but should be interpreted within the context of an identification framework that conditions out state-year averages and thus mechanically conditions out many possible ways that private prisons may influence sentencing. Within this context, the evidence is most consistent with the conclusion that lower incarceration costs induce judges to pass harsher sentences.