Cashless Stores Alienate Customers in the Name of Efficiency WIRED

The Fed is getting into the real-time payments business CNN

Robots Are Solving Banks’ Very Expensive Research Problem Bloomberg. The deck: “Banks can’t always afford to put analysts on the ground in developing nations—about the only places where investors can get yield right now.” But we can afford to hire expensive tech people to pull a few algos out of their digital assets? Or maybe the MBAs figure Bangalore is close enough to Jakarta for learning by osmosis to take place. Oy.

A Decline in Capital Investment Reveals the False Promise of Trump’s Tax Bill The New Yorker. The entire country is awash in capital (“over-production crisis”) and has been for some time. That’s why frivolous albeit malevolent projects like Uber exist. Trump ain’t it.

Germany Pins Hopes on Parliament to Thwart Johnson’s Brexit Plan Bloomberg. Let me know how that works out. Then again…

Leaving on October 31 won’t be the end of this. Brexit will never be over Evening Standard

The ‘man of the people’: what would Plato think of Boris Johnson? British Politics and Policy, London School of Economics

It Doesn’t Matter At All That Oil is Priced in Dollars #43,656 Dean Baker, CEPR

What Happens When Saudi Arabia Turns Off the Cash Spigot? Medium

Rivers of Dust: Water and the Middle East Counterpunch

Bolton warns China, Russia not to double down on support of Maduro Reuters

Correcting a historic blunder Indian Express. “Abrogation of Articles 370 and 35A is a much-needed step for the complete emotional integration of people of Jammu and Kashmir with the Indian Union.”

The Japan-South Korea Trade Dispute: What to Know Council on Foreign Relations

This legend was trying to clear the tear gas with a hand vacuum. I mean, it didn’t work, but I’m in awe of the level of fucks not given. pic.twitter.com/zVbfVkrOgm

In order to prevent the Chinese national flag from being damaged again, dozens of #HongKong residents spontaneously organized an operation to protect the flag on Tuesday morning at Tsim Sha Tsui Star Ferry Pier. #香港 pic.twitter.com/QNnb34ioEM

I don’t deny there’s support for the Mainland in HK, but holy moley, can’t we get an upgrade to the style guide?

How Tear Gas Works: A Rundown of the Chemicals Used on Crowds Scientific American

China warns of countermeasures if U.S. puts missiles on its ‘doorstep’ Reuters

The Metadata Trap: The Trump Administration Is Using the Full Power of the U.S. Surveillance State Against Whistleblowers The Intercept

Walmart shooter allegedly penned white supremacist rant in ‘bible of evil’ El Paso Times. If you want real cray cray, read a neoliberal economist. I say this not to diminish the seriousness of the shooter’s manifesto, but to point out that we as a society have an odd baseline for words like “rant.”

Beto O’Rourke Just Produced an Emotional, Scything Critique of the Media Esquire (Re Silc). Are there no copy editors?

For Latinos, El Paso is a devastating new low in a Trump era Los Angeles Times

CMS wants to force hospitals to reveal negotiated rates. Can it do that? Health Care Dive

There is no evil like reCAPTCHA (v3) Stoicism and Me. Amen.

Antidote du jour (via). Leveling up my cat game: 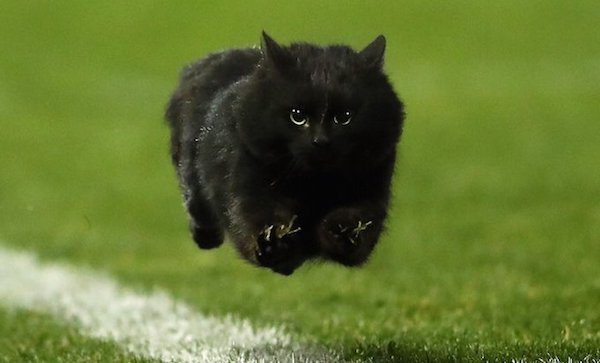 Black cat at a rugby game. Please sign him up. pic.twitter.com/BYL5HM0vvO