Yves here. How a rise in immigration drives perceptions of risk.

Between 2014 and 2017, more than 600,000 migrants crossed the Mediterranean and took up residence in Italy. Though crime rates during the same period continued to drop, a majority of Italians report feeling increasingly unsafe. This column investigates how immigration affects the perception of crime and the allocation of resources. Using detailed Italian government-spending figures along with municipal-level data on the population of foreign-born residents, it finds that immigration led to increased spending for police protection due not to higher crime rates but to the deterioration of social capital and unfounded fears of criminality.

The consequences of immigration are a salient and contentious issue in most destination countries, splitting public opinion and fuelling negative attitudes towards immigrants. Concerns about immigration often lead to tensions between locals and immigrants, religious prejudices or racist attitudes, and the emergence of extremist groups and support (Hainmueller and Hopkins 2014, Barone et al. 2016, Halla et al. 2017, Tabellini 2019). These tensions are frequently exploited by political parties to reap electoral gains. Anecdotal evidence suggests that immigration is associated with an increase in the fear of crime. A collective perception of insecurity can lead to the implementation of restrictive regulations and control mechanisms, including surveillance and profiling programs. It can also prompt additional public spending on security, even in the absence of any increase in the actual crime rate.

Against this background, our recent study (Bove et al. 2019) asked whether and how immigration affected public spending on police protection in Italian municipalities. The debate about law and order intensified after more than 600,000 would-be migrants travelled across the Mediterranean to Italian shores between 2014 and 2017. Since 2007, crime rates per 1,000 inhabitants have decreased by almost 25% across all Italian regions. Crimes perpetrated by foreign residents show a similar declining trend. Yet, by one estimate, 60% of Italians do not feel safe in their cities, making the Italian case a clear illustration of a broader point.

Our empirical analysis is based on a rich data set. We combine detailed information on local government spending items for more than 7,000 Italian municipalities between 2003 and 2015 with municipal-level data on the population of foreign-born residents, from their country of origin to demographic and socio-economic characteristics. Our core variable of interest is security spending, which we compute as a share of total current expenditure, including police costs (such as salaries, police presence and patrols, and the capital component in the production function for law enforcement, from vehicles to communication devices and special clothing). We then leverage exogenous variations in immigration flows following recent rounds of enlargement of the European Union to construct a novel shift-share instrument. We complement this approach with historical data on migration and political preferences in the 1930s during the Fascist regime.

Figure 1 shows the distribution of public spending on security as a share of total spending and the share of immigrants across municipalities. These variables are residuals obtained from a linear regression after having controlled for municipality and fixed-year effects. Figure 1 indicates a positive security-spending-immigrant nexus, which is not concentrated but scattered across the country. 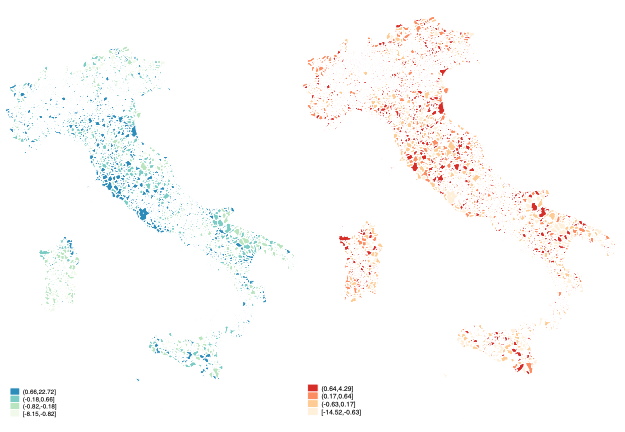 Note. The share of local public spending on security (left-hand map) and the share of immigrants (right-hand map) are residuals of a linear regression that controls for municipality and fixed-year effects using data over the period 2003-15.

We find a positive and statistically significant relationship between immigration and local public spending on police protection (see Figure 2). On average, the amount of spending allocated to local security increases by 0.12-0.30 percentage points for every one point increase in the share of immigrants. This is a very large effect, as municipalities spend an average of 4.3% of their budget on security. We find that the relative increase in local security spending comes at the expense of the budget allocated to other important functions, such as culture, tourism, and local economic development. Italian cities have long struggled to afford the cost of basic infrastructure maintenance and to provide vital services. The estimated magnitude of this relationship is therefore not only statistically significant but economically meaningful. 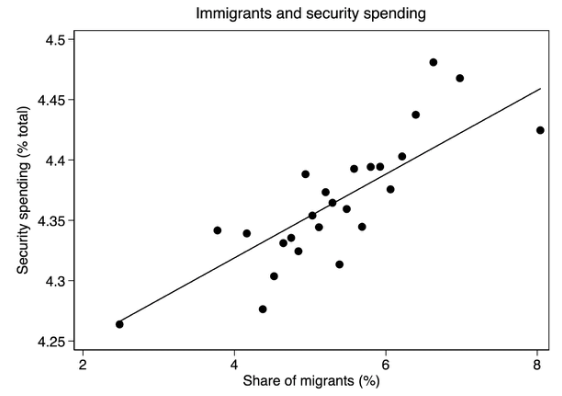 The cultural distance between social groups is likely to be a core driver of negative attitudes and prejudice towards immigrants as well as locals’ concerns about insecurity and national cohesion (Citrin et al. 1990). As a second step, we consider degrees of cultural similarity by including information on the genetic, religious, and linguistic proximity between immigrants and natives (Spolaore and Wacziarg 2016). We find that the cultural proximity of foreign-born inhabitants to the native population matters, and the relation between immigration and security spending is more pronounced as the cultural distance between migrants and natives increases.

We offer three primary insights into the mechanisms behind these results. First, we ask whether municipalities with larger immigrant concentrations might be associated with higher crime rates, which could (eventually) motivate higher spending on municipal police. Our empirical analysis suggests that migrants are not significantly associated with higher crime rates.  It also rules out the possibility that immigration, by increasing security spending, indirectly reduces crime. As such, the impact we observe on security spending is hard to square with a migration-crime nexus. This is consistent with previous studies demonstrating that immigrants are not more crime prone than their native-born counterparts; that they do not significantly increase the overall crime rate or the number of violent crimes; and that legalization further reduces immigrant crime rates (Bianchi et al. 2012, Bell et al. 2013, Mastrobuoni and Pinotti 2015, Pinotti 2017, Light and Miller 2018).

Second, we ask whether a misalignment between perceptions of crime and reality could develop at the local level, and whether immigration could increase the fear of future crimes as opposed to the actual probability of a crime being committed. Our individual-level data show that individuals whose neighbours are of a different race or birthplace are more likely to report that fighting crime is a national priority and to believe that immigrants increase crime-related problems.

Third, we ask why immigration shapes worry about crime and perceptions of feeling unsafe. A wealth of studies, mostly in criminology, suggest that trust and social cohesion in neighbourhoods are strongly associated with fear of crime (Brunton-Smith et al. 2014, Rader 2017). Higher demand for public order and safety at the local level could be driven by a deterioration in the degree of social capital – the ties and relationships that bind members of a society to one another. Social capital can be an indicator of a society’s cohesiveness and the extent of peaceful coexistence and individual interactions (Guiso et al. 2006). We find that immigration has a negative impact on the number of non-profit organizations, a common measure of the strength of social networks at the municipal level. Immigrants’ countries of origin seems crucial, and the coefficient is larger the higher the cultural distance between immigrants’ homes and their host countries. Having neighbours of a different race, or foreign neighbours, correlates negatively to trust in social interactions and erodes social cohesion and civic cooperation. At this point, we note that the erosion of social capital and the fear of crime provide a credible explanation for the observed pattern.

Immigrant populations in Europe have been growing rapidly for decades. Over the same period, crime has moved in the opposite direction, with the rate of violent crimes in many countries well below those of the 1990s. Yet, political parties in Hungary, Austria, and Italy have won elections using campaigns that whipped up fears about the impact of immigration on crime, and worries about violent crime have aided the political success of anti-immigration parties at the local level. This can have important consequences for a municipality’s determination of short- and long-term priorities and funding for local services. Understanding the consequences of immigration for the fiscal position of the municipalities they seek to join is crucial to developing effective public policy.