Normally, I’d start out with a big problem statement, but coral is so beautiful I think I’ll start with the coral itself, then with what people are doing to save it — because of course it needs saving, in the Caribbean, Australia, and elsewhere — and then the coral section from the latest IPPC report on the oceans, and why coral is important to the biosphere (and “the economy”). Then I’ll raise the question of mobilization.

For lovers of symmetry: 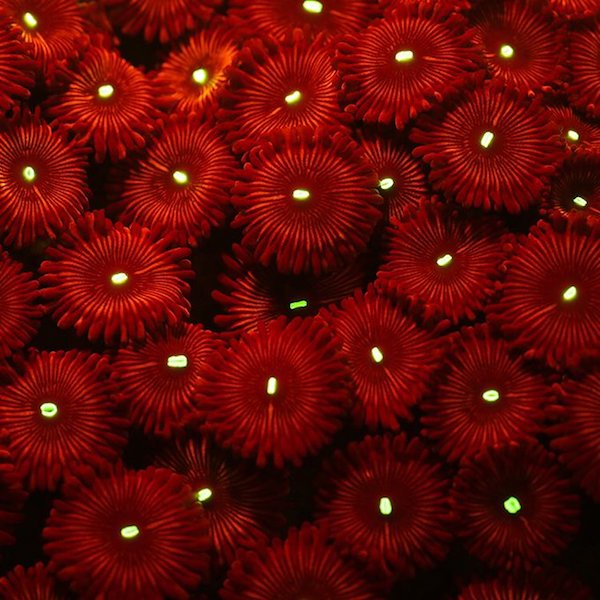 And for those with more asymmetrical tastes: 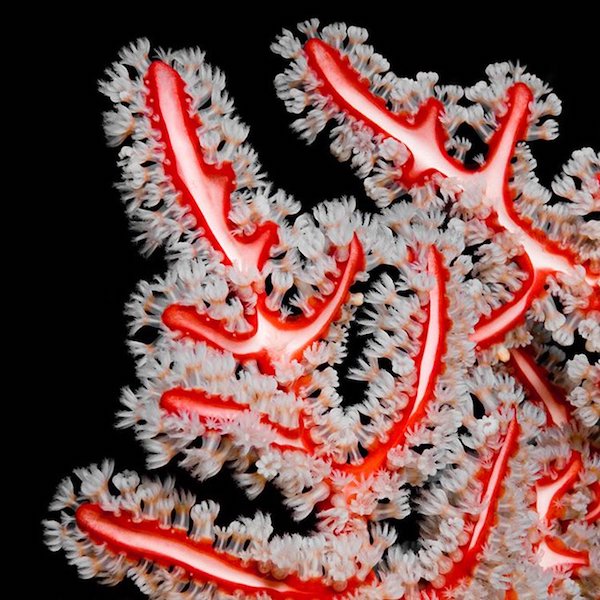 (Both images are from Coral Morphologic.) But what is coral? From NOAA:

Corals are sessile, which means that they permanently attach themselves to the ocean floor, essentially “taking root” like most plants do. We certainly cannot recognize them by their faces or other distinct body parts, as we can most other animals.

Corals actually comprise an ancient and unique partnership, called symbiosis, that benefits both animal and plant life in the ocean. Corals are animals, though, because they do not make their own food, as plants do. Corals have tiny, tentacle-like arms that they use to capture their food from the water and sweep into their inscrutable mouths. Residing within the coral’s tissues, the microscopic algae are well protected and make use of the coral’s metabolic waste products for photosynthesis, the process by which plants make their own food.

The corals benefit, in turn, as the algae produce oxygen, remove wastes, and supply the organic products of photosynthesis that corals need to grow, thrive, and build up the reef..

More than merely a clever collaboration that has endured between some of the tiniest ocean animals and plants for some 25 million years, this mutual exchange is the reason why coral reefs are the largest structures of biological origin on Earth, and rival old-growth forests in the longevity of their ecological communities.

Puny humans![1] This is the story that got me thinking I should write on this: “Coral gardeners bring back Jamaica’s reefs, piece by piece,” obviously because of the word “gardeners”:

He steers the boat to an unmarked spot that he knows as the “coral nursery.” ″It’s like a forest under the sea,” he says, strapping on blue flippers and fastening his tank before tipping backward into the azure waters. He swims down 25 feet (7.6 meters) carrying a pair of metal shears, fishing line and a plastic crate.

On the ocean floor, small coral fragments dangle from suspended ropes, like socks hung on a laundry line. Simpson and other divers tend to this underwater nursery as gardeners mind a flower bed — slowly and painstakingly plucking off snails and fireworms that feast on immature coral.

When each stub grows to about the size of a human hand, Simpson collects them in his crate to individually “transplant” onto a reef, a process akin to planting each blade of grass in a lawn separately.

Even fast-growing coral species add just a few inches a year. And it’s not possible to simply scatter seeds.

A few hours later, at a site called Dickie’s Reef, Simpson dives again and uses bits of fishing line to tie clusters of staghorn coral onto rocky outcroppings — a temporary binding until the coral’s limestone skeleton grows and fixes itself onto the rock. The goal is to jumpstart the natural growth of a coral reef. And so far, it’s working.

Almost everyone in Jamaica depends on the sea, including Simpson, who lives in a modest house he built himself near the island’s northern coast. The energetic 68-year-old has reinvented himself several times, but always made a living from the ocean.

Gardener, old-codger… Obviously, I’ve been taken in by a feel-good story! But not so fast:

“The coral are coming back; the fish are coming back,” says Stuart Sandin, a marine biologist at the Scripps Institution of Oceanography in La Jolla, California. “It’s probably some of the most vibrant coral reefs we’ve seen in Jamaica since the 1970s.”

“When you give nature a chance, she can repair herself,” he adds. “It’s not too late.”

So, do-able. Here is a similar story. From The Telegraph, “How an unlikely household item is fixing the coral reef at Thailand’s most famous beach“:

Scientists have come up with an unlikely way to restore marine life to a Thai beach that’s been ravaged by overtourism: superglue.

Maya Bay, a small cove made famous by Leonardo DiCaprio’s blockbuster The Beach in 2000, was closed indefinitely last October after buckling under the pressure of up to 5,000 visitors a day, all of whom arrive in boats that can damage the coral reef and pollute the water.

Since then, ecologists have been working to regrow the coral by glueing dead portions of it back onto the rocks; and futile as it sounds, the painstaking process is working. After about a week, the coral is stable enough to grip the terrain independently, the glue dissolves and the reef can flourish.

(I would bet that scientists are only needed to bootstrap the process, and that locals could do this very well on their own.)

So, not “futile.” Only painstaking. Do-able. Which is not to say that what needs to be done is being done. From Chapter 5 of the latest IPCC report, “Special Report: Special Report on The Ocean and Cryosphere an a Changing Climate“:

Warm-water coral reefs host a wide variety of marine life and are very important for tropical fisheries and other marine and human systems. They are particularly vulnerable, since they can suffer high mortalities when water temperatures persist above a threshold of between 1 – 2°C above the normal range. Such conditions occurred in many tropical seas between 2015 and 2017 and resulted in extensive coral bleaching, when the coral animal hosts ejected the algal partners upon which they depend. After mass coral mortalities due to bleaching, reef recovery typically takes at least 10–15 years. Other impacts of climate change include sea level rise, acidification and reef erosion. Whilst some coral species are more resilient than others, and impacts vary between regions, further reef degradation due to future climate change now seems inevitable, with serious consequences for other marine and coastal ecosystems, like loss of coastal protection for many islands and low-lying areas and loss of the high biodiversity these reefs host. Coral habitats can also occur in deeper waters and cooler seas, and more research is needed to understand impacts in these reefs. Although these cold water corals are not at risk from bleaching, due to their cooler environment, they may weaken or dissolve under ocean acidification, and other ocean changes.

Coral reefs are one of Earth’s most productive ecosystems — both in terms of biology and cold, hard cash. Healthy coral reef ecosystems do everything from supporting millions of jobs to protecting lives and valuable coastal infrastructure, like hotels and roads, from storms and waves. In fact, each year coral reefs pump more than $3.4 billion into the U.S. economy. And that’s a conservative estimate!

Despite all they do for us, our coral reef ecosystems are threatened. Climate change, pollution from the land and harmful fishing practices top the list of threats. Fortunately, it’s not too late to protect these resources.

(I would bet $3.4 billion is off by a decimal point if you figure in knock-on effects.)

Now, mobilization. The screaming paradox of our times — readers will no doubt take me to task for over-simplifying — is that on the one hand, we have trillions of dollars in capital sloshing about that can’t seem to find a home with a reasonable rate of return; hence, stupidities like Uber, robot cars, the entire “innovation” economy, stock buybacks, and so on. And on the other, we have enormous infrastructural projects crying out to be mobilized, projects to recuperate the Nature without which capital cannot reproduce itself, no, not even on Mars or New Zealand, and all that opportunity is wasted. (Is it profitable? No, and so what? You and your children get to keep on living and breathing, so there’s that.) It’s insane. How many coral gardeners would one confiscated Uber fund? I would bet more enough to save the Caribbean. (Coral gardening would be a good job, too.) Of course, we ought to have a State that can mobilize such projects — without bringing tears to the eyes of Uber’s VCs, heaven forfend, or at least no more than strictly necessary — through approaches like the Green New Deal. Thank you for coming to my TED talk. And now, back to impeachment!

[1] Clearly, I need to declare coral an honoray plant, like fungi.