The FAA evidently lacked perspective on how much trouble it was in after the two international headline-grabbing crashes of the Boeing 737 Max. It established a “multiagency panel” meaning one that included representatives from foreign aviation regulators, last April. A new Wall Street Journal article reports that the findings of this panel, to be released in a few weeks, are expected to lambaste the FAA 737 Max approval process and urge a major redo of how automated aircraft systems get certified.

The aim of the panel, called the Joint Authorities Technical Review, was to expedite getting the 737 Max into the air by creating a vehicle for achieve consensus among foreign regulators who had grounded the 737 Max before the FAA had. But these very regulators had also made clear they needed to be satisfied before they’d let it fly in their airspace.

The JATR gave them a venue for reaching a consensus, but it wasn’t the consensus the FAA sought. The foreign regulators, despite being given a forum in which to hash things out with the FAA, are not following the FAA’s timetable. The FAA hopes to give the 737 Max the green light in November, while the other regulators all have said they have issues that are unlikely to be resolved by then. The agency is now in the awkward position of having a body it set up to be authoritative turn on the agency’s own procedures.

The Seattle Times, which has broken many important on the Boeing debacle, reported on how the FAA had moved further and further down the path of relying on aircraft manufactures for critical elements of certification. Not all of this was the result of capture; with the evolution of technology, even the sharpest and best intended engineer in government employ would become stale on the state of the art in a few years.

However, one of the critical decisions the FAA took was to change the reporting lines of the manufacturer employees who were assigned to FAA certification. From a May post:

Although all stories paint a broadly similar picture,….the most damning is a detailed piece at the Seattle Times, Engineers say Boeing pushed to limit safety testing in race to certify planes, including 737 MAX …..The article gives an incriminating account of how Boeing got the FAA to delegate more and more certification authority to the airline, and then pressured and abused employees who refused to back down on safety issues….

As the Seattle Times described, the problems extended beyond the 737 Max MCAS software shortcomings; indeed, none of the incidents in the story relate to it. 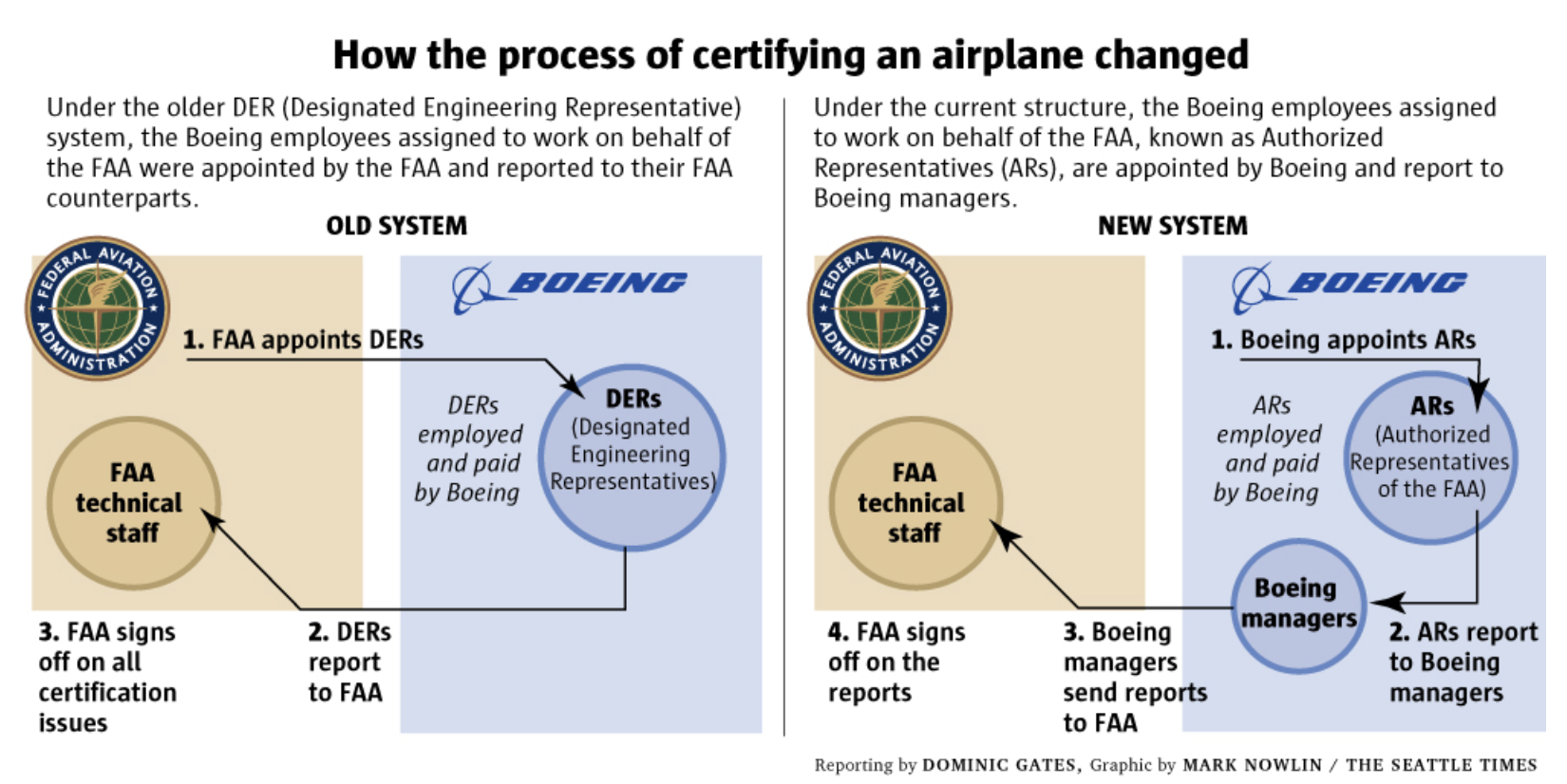 Mind you, the Seattle Times was not alone in depicting the FAA as captured by Boeing. On Monday, the Post and Courier reported about the South Carolina plant that produced 787s found with tools rattling inside that Boeing SC lets mechanics inspect their own work, leading to repeated mistakes, workers say. These mechanic certifications would never have been kosher if the FAA were vigilant. Similarly, Reuters described how Boeing weakened another safety check, that of pilot input.

One of the objectives for creating this panel was to restore confidence in Boeing and the FAA, but that was always going to be a tall order, particularly after more bad news about various 737 Max systems and Boeing being less than forthcoming with its customers and regulators emerged. From the Wall Street Journal:

As part of roughly a dozen findings, these government and industry officials said, the task force is poised to call out the Federal Aviation Administration for what it describes as a lack of clarity and transparency in the way the FAA delegated authority to the plane maker to assess the safety of certain flight-control features. The upshot, according to some of these people, is that essential design changes didn’t receive adequate FAA attention.

The report, these officials said, also is expected to fault the agency for what it describes as inadequate data sharing with foreign authorities during its original certification of the MAX two years ago, along with relying on mistaken industrywide assumptions about how average pilots would react to certain flight-control emergencies….

The FAA has stressed that the advisory group doesn’t have veto power over modifications to MCAS.

But the report could influence changes to traditional engineering principles determining the safety of new aircraft models. Certification of software controlling increasingly interconnected and automated onboard systems “is a whole new ballgame requiring new approaches,” according to a senior industry safety expert who has discussed the report with regulators on both sides of the Atlantic.

If the FAA thinks it can keep this genie the bottle, it is naive. The foreign regulators represented on the task force, including from China and the EU, have ready access to the international business press. And there will also be an embarrassing fact on the ground, that the FAA, which was last to ground the 737 Max, will be the first to let it fly again, and potentially by not requiring safety protections that other regulators will insist on. For instance, the Journal reports that Canadian authorities expect to require additional simulator training for 737 Max pilots. Recall that Boeing’s biggest 737 Max customer, Southwest Airlines, was so resistant to the cost of additional simulator training that it put a penalty clause into its contract if wound up being necessary.

It’s a given that the FAA will be unable to regain its former stature and that all of its certifications of major aircraft will now be second guessed subject to further review by major foreign regulators. That in turn will impose costs on Boeing, of changing its certification process from needing to placate only the FAA to having to appease potentially multiple parties. For instance, the EU regulator is poised to raise the bar on the 737 Max:

Patrick Ky, head of the European Union Aviation Safety Agency, told the European Parliament earlier this month, “It’s very likely that international authorities will want a second opinion” on any FAA decision to lift the grounding.

Even after EASA gives the green light, agency officials are expected to push for significant additional safety enhancements to the fleet. Most prominently, EASA has proposed to eventually add to the MAX a third fully functional angle-of-attack sensor—which effectively measures how far the plane’s nose is pointed up or down—underscoring the controversy expected to swirl around the plane for the foreseeable future.

A monopoly is a precious thing to have. Too bad Boeing failed to appreciate that in its zeal for profits. If the manufacturer winds up facing different demands in different regulatory markets, it will have created more complexity for itself. Can it afford not to manufacture to the highest common denominator, say by making an FAA-only approved bird for Southwest and trying to talk American into buying FAA-only approved versions for domestic use only? It’s hard to see how Boeing hasn’t gotten itself in the position of being at a major competitive disadvantage by virtue of having compromised the FAA so severely as to have undercut safety.