I’ve written before, on Labor Day, about factory work in Providence, Rhode Island, which I loved, and today I got to thinking about the jobs I had when I was in junior high school. This post will be short because there wasn’t much to them!

My first real job — that is, my first transaction with another person where I performed work in exchange for money — was shelving books in my local public library in the Midwest, where I grew up.

I was in Junior High School. The librarians knew me, because I had devoured the children’s section, the young adults section, and was moving through the adult section at a good clip (Stephen Potter, Emile Zola, C.P. Snow, Matthew Josephson’s The Robber Barons, Tom Wolfe, Oscar Wilde, Joseph Conrad, and so on). I guess they figured it would be easy for me to shelve books, because I would be likely to know where they should go. So the librarians asked my parents, and they asked me, and I said yes, and so they took me down to the local Social Security office, where I was immediately issued a Social Security number at sight on a paper card, which I signed. That way, the library could issue my check. The wage was, I believe, twenty-five cents an hour (which would be $1.98 today).

So after school, I would bike over to the town’s new, modern library and shelve books. The librarians placed the returns into small, wheeled, wooden carts with two levels of shelving, two shelves at each level angled down toward the center so the books didn’t fall out. When a cart was full, it was heavy, and took a little maneuvering! The library used the Dewey Decimal System, and so there was a number at the bottom of the spine of each book that told me where to insert the book on which shelf in the open stacks. (Books are stored vertically, spines out, titles upright on shelves in “the stacks,” for those extremely online readers who came in late). One could think of the shelves as a number line stretching from 000 (“General Works”) to 900 (“History and Geography”), though the collection in this library was disproportionately in the 800s (“Literature”). My job was to take each book from my cart and insert it into the number line by its number so that all the shelved books retained the correct order — sometimes I had to rearrange them; users! — until there were no more books in the cart, at which point I went back for another cart, until there were no more carts (sometimes there were as many as four). This was an important and responsible job, because if the books were out of order, readers might not be able to find them on the shelves! (Again for those who came in late, readers of that day, at least those not acting serendipitously by wandering the stacks, like I did, would find books using a “card catalog” that mapped the titles of books to their Dewey Decimal numbers, and therefore to their location on the shelves[1]). When there were no more carts, I would get on my bike and ride home, or off to play, or whatever.

The work was peaceful and orderly and absorbing; I think my fascination with classification systems and taxonomies dates from that time. I learned to organize the work so it went quickly, so quickly that I could sometimes skim a book that was new to me to see whether I wanted to check it out and read it. Very little could go wrong, except shelving a book in the wrong place, but that was unlikely; the only debacle I remember is overturning a cart full of books when a pretty girl I liked walked into the library. I worked almost entirely without supervision, and then there was the small check every two weeks, which I spent on model trains.

In the same town, at least in the spring through the fall, I also mowed lawns. (I enjoyed this, too; my hatred of lawns is political in nature, not derived from some bad experience mowing them.) Here too, my parents set me up for success; we, having a lawn, already had a lawnmower, and they connected me with a neighbor who needed their lawn cut, for money, naturally. (Teenagers had time to do such things in those days, not being over-scheduled. There were no such things as soccer, or play dates, when I was growing up.) I set my own rates, by the size of the lawn, not the clock, and began a life-long habit of undercharging for my work as a freelancer. Having undercharged, I naturally got a lot of work almost immediately, and was spreading my wings into an adjoining neighborhood when we moved to Maine, and that was that; there were no lawns worth the name in my new neighborhood, sadly.

Looking back, it seems pretty amazing that a child was let loose with a roaring, gasoline-powered machine with a sharp whirling blade on the underside and no safety guards at all; but I still have all my toes (even though I mowed lawns barefoot; very pleasurable). I enjoyed this work, too. Every lawn was a rectangle, more or less, with objects to avoid, like trees. The trick, for both time and safety, was to change the direction of the mower as few times as possible, so ideally, the strips of the cut should be lengthwise, not cross-wise. Ideally, I would flip the mower from one strip to the next, so as to minimize swinging the mower around in a U-turn, which was work, and also a bit dangerous. This too was fun; I liked the planning and the execution, and also the great wave of sound from the mower. No electric mowers for me! This money — I remember I charged one lady twenty-five cents for her very small yard; the biggest yard was two dollars — I also spent on model trains.

I am a big believer in the dignity of labor, which makes this a Labor Day post. I think it’s important to have work that is absorbing and responsible and worthy of one’s talents. It’s possible, I think, to find dignity in all labor — as long as you are free to do it. (Cue discussion of slaves vs. wage slaves.) I was about to qualify “all labor”, but I think that even the dalits (the “untouchables”) of India have dignity, even if the Brahmins don’t believe it.[2] In any case, if you believe that history advances by altering material conditions, there’s no way to get that done except by labor. Labor is agency; agency labor. You cannot have dignity without agency; you cannot have agency without the capacity to labor.[3] You will see that I am quarreling with the dictionary definition just a bit; from the Oxford English Dictionary: 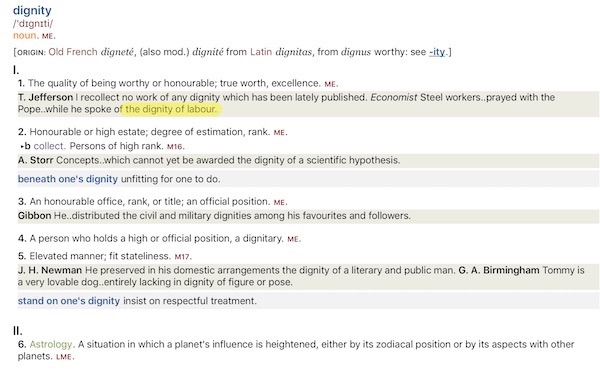 I don’t think dignity should be confused with status or eminence (although amour propre of the the eminent would surely have it so). When I was a little older, in high school, I discovered the American Heritage Dictionary, with its Appendix of Indoeuropean roots (so much richer than the OED, which tends to go no further back than Latin or Greek or German). Here is the root of dignity, dek-: 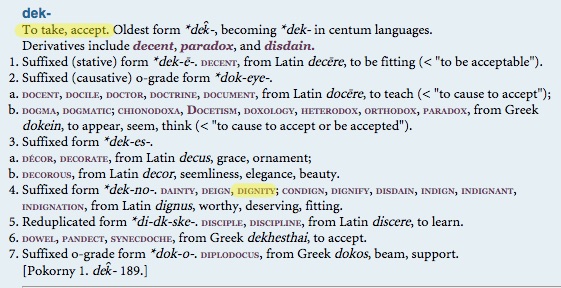 (A fascinating web of connected meanings, including doctrine, dogma, decorate, disciple, docile, and so on.) So one might say that the dignity of labor, at the root, is about what one will take: “Take” for one’s labor, and “take” while doing one’s labor.

[1] A system of indirection roughly analogous to mapping a URL to an IP address to a “resource.”

[2] I suppose the counter-example is what happens in Japan when management wants to get rid of you; they put you in a room and give you nothing to do. And it is true that there’s no dignity in a job but no work.