Today we have a CalPERS trifecta. This post may seem less sexy than election-rigging, but it provides further evidence of CalPERS’ institutionalized abuses.

Bloomberg did the heavy lifting in providing a concrete example of how CalPERS engages in the criminal abuse of the Bagely-Keene Open Meetings Act by improperly relegating information and decisions that should be shared with the public to its confidential meetings, the so-called closed session. In this case, Bloomberg sought and eventually obtained a partly-redacted BCG report on CalPERS’ private equity strategy.

The fact that CalPERS coughed up most of this document (and we’ll explain why most of the redactions are overreaching) was an admission that a great deal of this deliberation was improperly held in closed session. This climbdown means the legal department knows full well that its stance about closed session confidentiality is an over-reach. And that means board members can’t pretend that they don’t know that General Counsel Matt Jacobs goes too far in his penchant for secrecy, when under the law, they are criminally liable for knowing abuses of Bagley-Keene.

As we’ve explained earlier, the Bagley-Keene Open Meeting Act deems that abuse to be criminal if individual board members thought the closed session classification was improper. From an August post:

But even more important is that Brown described how holding the discussion of investigation in closed session was a violation of the Bagley-Keene Open Meeting Act. And if this violation was knowing, individual board members are subject to criminal penalties (see page 14 of the Attorney General’s guide)….

In other words, the default for a California public agency like CalPERS is that information is public, and that board decision-making is to take place in public meetings so as to allow affected constituents the opportunity to provide input before a decision is made. And it’s going to be hard for CalPERS board members to maintain the pretense that “It never occurred to us that this ought to be public” as constituents like attorney David Soares and board member Margaret Brown highlight evidence of improper closed-session discussions, including obviously bogus justifications from the General Counsel’s office.

However, disappointingly, Bloomberg didn’t write up its finding, presumably because its interest in CalPERS is in breaking finance news, as opposed to exposing misconduct and governance failings.

In a bit of synchronicity, at the candidates’ forum yesterday for the current board election, Board President Henry Jones leaked confidential information from a CalPERS closed session. CalPERS has depicted this sort of thing as a hanging crime, with none other than Jones himself falsely accusing then fellow board member JJ Jelincic with sharing secret information in a similar forum with CalPERS beneficiaries. Jones continued to try to get Jelincic sanctioned when all he did was mention information in a public court filing. And as we’ve described, this isn’t the first time board members have leaked closed session information, with not even so much as a raised eyebrow in response. Henry Jones and board member Theresa Taylor are past offenders.

Yet CalPERS wasted beneficiary funds on a big ticket investigation into leaks as a way to dirty up pro-accountability board member Margaret Brown and candidate Jelincic. The anti-whistleblower law firm Orrick came up empty-handed.

In other words, CalPERS, as it does in other areas, takes the posture that it is above the law, making arbitrary, self-serving designations in the face of clear-cut legal obligations, knuckling under only when parties with enough financial muscle like Bloomberg threaten to take them on. Despite the fact that California has strong pro-transparency statutes, CalPERS acts as if it can classify anything as secret that might embarrass the institution. Given its current state of bumbling, that means it’s routinely putting a shroud over lots of activities that ought to be in the open.

As you can see below, Bloomberg reporter John Gittelsohn sought a BCG report on CalPERS private equity scheme via a Public Records Act request. CalPERS initially denied it in its entirety. Then a Bloomberg lawyer, in a letter embedded below, described how CalPERS’ response was deficient in form and substance.

CalPERS coughed up a partially-redacted copy of the BCG report while giving Bloomberg a diss by refusing to justify its redactions as required.

It’s clear just on a flip through that many of the redactions aren’t warranted. For instance, CalPERS hides the names of BCG interviewees. BCG may have promised those parties confidentiality but that promise does not bind CalPERS and isn’t supported by the Public Records Act.1 Similarly, there are numerous places in the slide show where charts or tables are redacted where the footnotes or headers make clear that they information is derived from public sources, so it’s not confidential.

The Bloomberg letter makes a key point that while CalPERS may be able to treat consideration of pending transactions as market sensitive and therefore confidential, consideration of broad strategies is another matter. This is clearly the case here, since as we repeatedly described, CalPERS’ attempts to depict its shape-shifting private equity scheme as innovative was false. It had no novel elements save one that was appallingly bad and almost certainly illegal for a California government body: that of transferring massive amounts of money to a newly-formed legal entities where CalPERS would have no control whatsoever, not even board seats. From the missive:

It is our understanding that the two proposed programs (Pillars III and IV) are private equity strategies to each invest $1-2 billion annually in late state tech and health-care related startups and in operating companies that would be held for a long time period, respectively. The investments would be managed by external teams hired and financed by CalPERS. On March 18, the board endorsed pursuit of the two plans on a 10-3 vote. The reports requested were referenced in an open session by board member Margaret Brown, who cited risks outlined by BCG but not made public. Ms. Brown’s comments indicate that the report made conclusions about potential risks and recommendations for mitigation measures that pertain to general strategies of the investments, rather than specific investment decisions, contracts or financial results (which, of course, would not be available for an investment that hasn’t yet commenced). In fact, discussions of specific investments under Pillars III and IV prior to March 18 would have been premature and out of compliance with the motion approved that day. According to the official meeting transcript,’ the Investment Committee authorized staff to “develop the structure and guiding principles” of the new strategies and required a “prudent person opinion” and board approval before any funding commitment would be finalized. Bloomberg also believes some of the information may relate to returns on past investments, which are already subject to public reporting on an annual basis under AB 2833.

Here are a few examples of the numerous overreaching redactions. The ones on page 3 are silly. 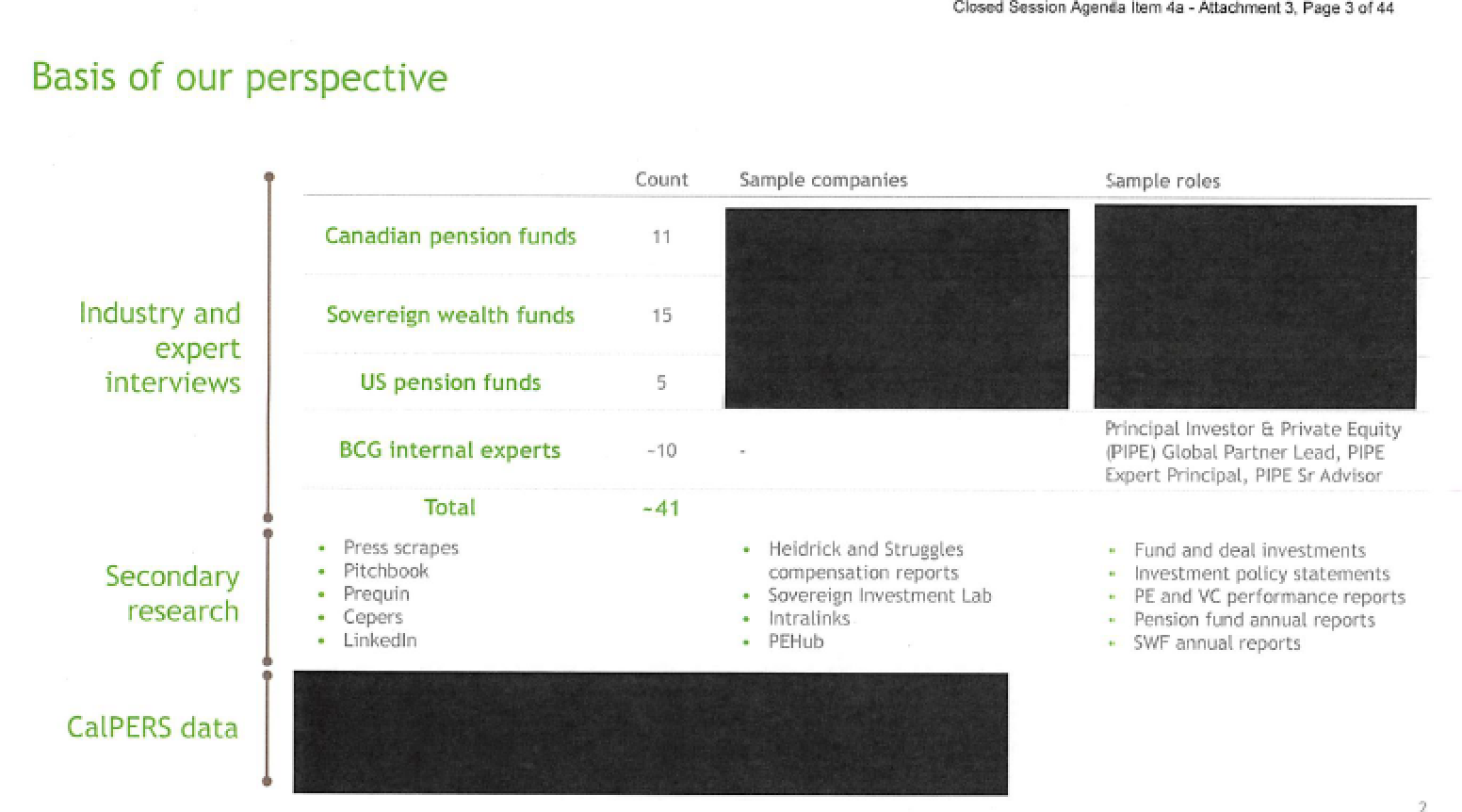 Per above, the names of the companies BCG interviewed, let alone a mere “sample,” isn’t protected under the Public Records Act, let alone typical titles of interviewees. Nor is the sort of high level listing of the types of information BCG considered at CalPERS.

How about page 15? I challenge readers to come up with anything that could fit under this headline that would be sensitive, much the less legitimately secret: 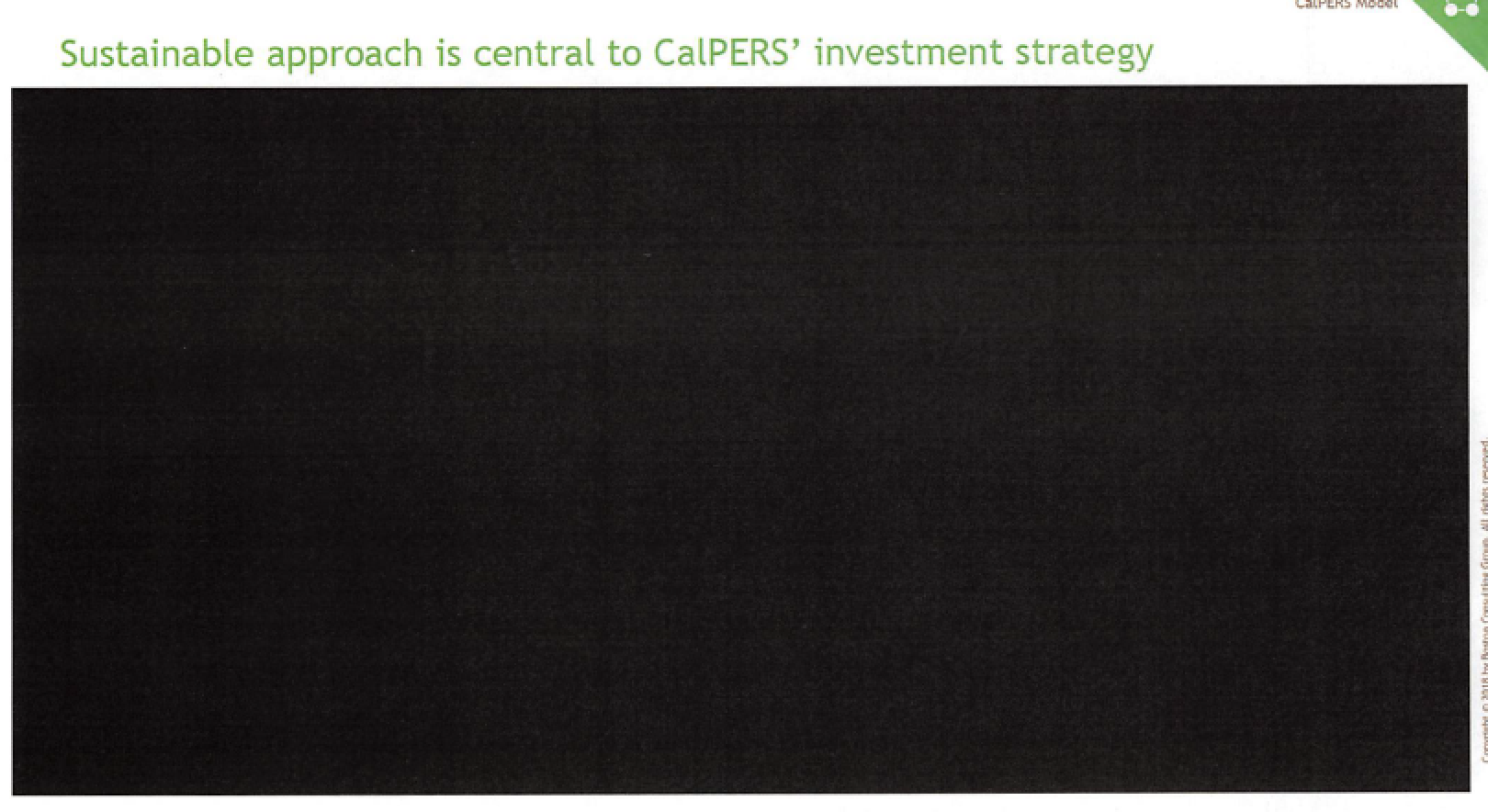 This is page 36. Since when is a broad listing of possible models, based on existing industry practice, a state secret? 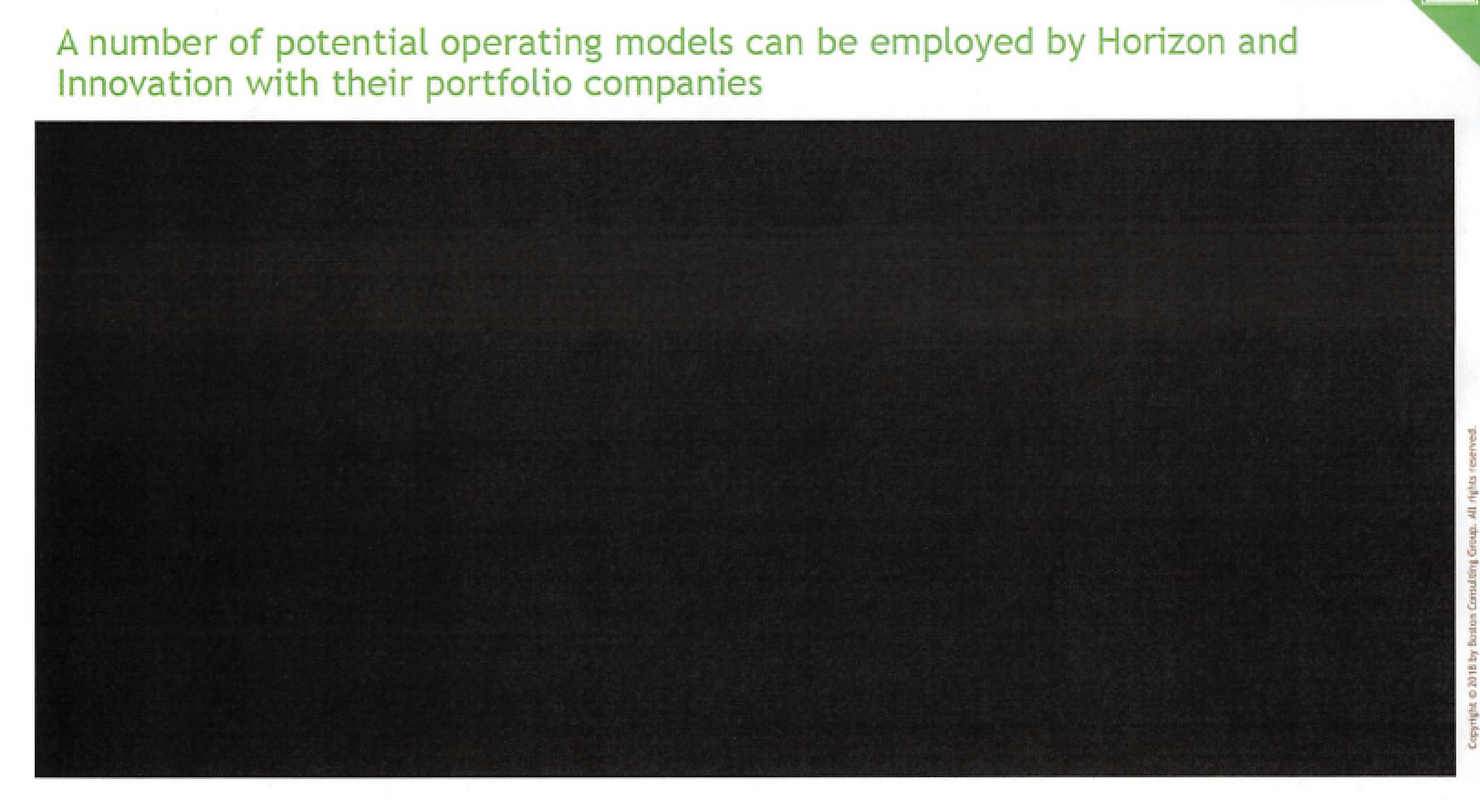 Or how about this certain-to-be “dare to be great” corporate boilerplate on page 39? 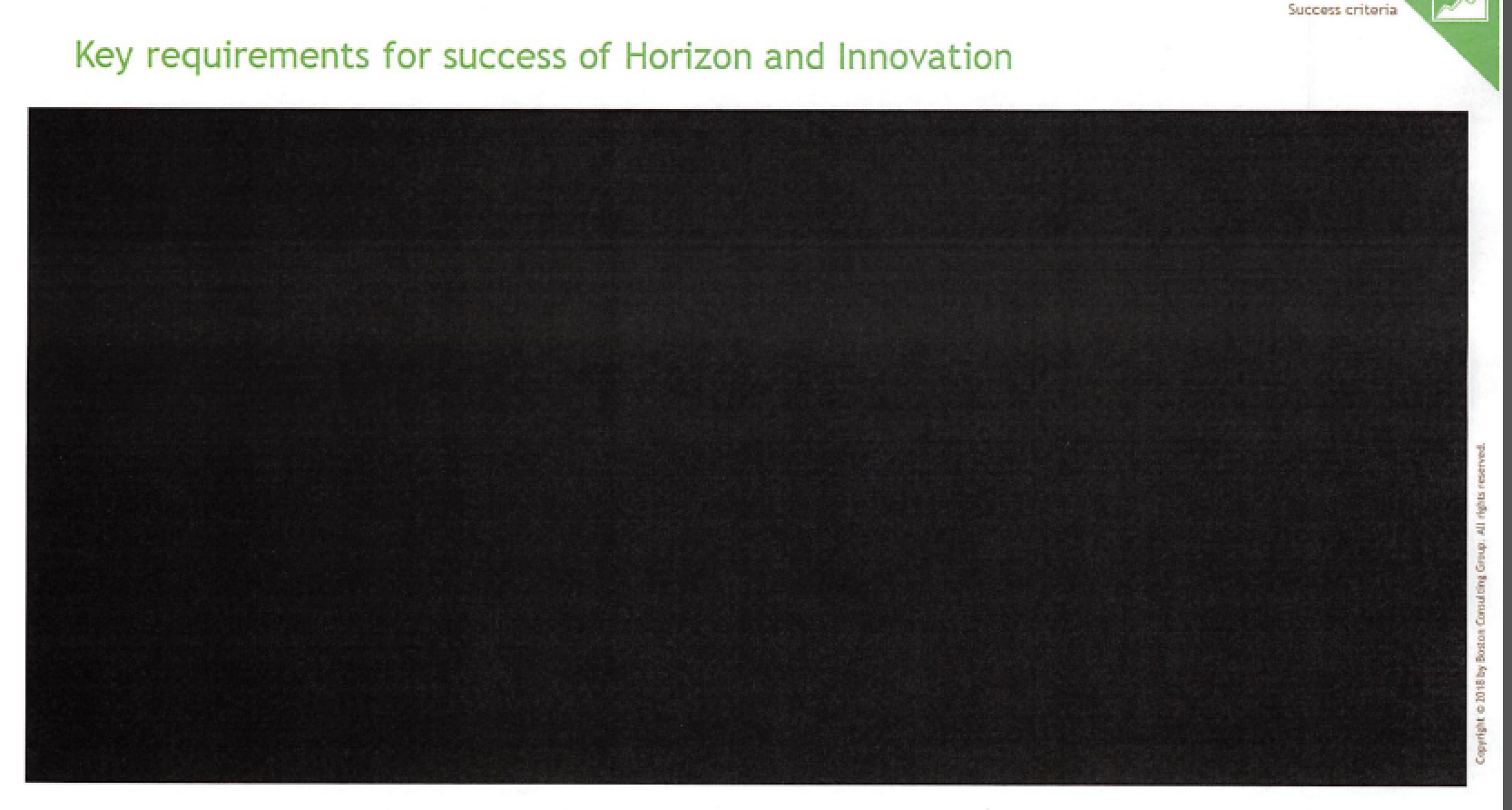 These examples should help make the broader point clear. There’s virtually nothing in this deck that was legitimately confidential. If BCG was sensitive about client names, it could have worked the document around that. If there were any bona fide bits for discussion in closed session, such as asking BCG for its views about particular negotiations underway, that could have been relegated to a separate sub presentation to hold in closed session after the public part.

Now to the Henry Jones leak. Tuesday afternoon, Jones and board seat challenger were the featured act in a candidate’s forum. Jones disclosed closed session information when he talked about a commercial development project funded solely by CalPERS, 301 Capitol Mall:

With modifications, because we have terminated the agreement with CIM who was the lead developer for the project and we are now seeking to find another vendor to work with the developer on the mall.

But the long-term estimates of that is still a piece of prime Knoll that could be developed and so we have — we own it already. So it’s not like we’re going out and buying it. So it’s the development aspect of the mall. But we did terminate the agreement with CIM and are looking for a new partner.

The reason this is startling is that CalPERS has tried depicting any disclosure of matters discussed in closed session, even if they were public, as a leak…if the party disclosing them was someone like JJ Jelincic, who CalPERS executives and the majority of the board have tried to hamstring over his pro-transparency posture.

Moreover, last September, the Wall Street Journal ran a detailed story on 301 Capitol Mall, including that three of the thirteen board members voted against the project over concerns about its returns. Board members who supported the project have told outside parties that they believed some of the unhappy board members broke closed session confidentiality and placed the story. That charge seems misguided, since given that the project got a go-ahead, complaining about it to the press would not derail it. Nevertheless, given the ongoing witch hunt for leakers and what appears to be sensitivity about this project, for Jones to blab casually about it isn’t a good look.

But then again, CalPERS is so deeply ensconced in its own bubble that it is in deep denial about its image as well as the source of its woes. For instance, it’s convinced that the fact that it is no longer getting flattering media coverage is due to saboteurs and outside agitators. In fact, it’s the result of deep underfunding, visibly poor and obfuscatory performance of staff in public meetings, and ham-handed efforts to manipulate the press. Unfortunately, organizations in decline usually have to get much worse before they get better.

1 Having done these sorts of interviews numerous times, the interviewees are well aware that they can’t be sure how the information will be used and do not share information that they think has competitive value.