Yves here. On the one hand, this article sets forth a nascent housing trend: that of building or retro-fitting homes to be elderly-friendly. On the other, without getting the full details, this couple built a home that was wheelchair friendly. Another potential need is live-in help. And caring for the yard would eventually be entirely hired out if the couple is indeed able to age in place.

The article also politely notes that not being able to drive becomes an issue, yet seems to have a “assume public transportation” as a remedy.

Another issue is the ecological implications of more and more people wanting a single-story home, which all other things being equal, would be even more costly to heat and cool than two story home, since single story homes would generally have a higher surface to mass ratio.

It would obviously be a lot more efficient if more of this sort of thing could be done on a collective or group basis….and that doesn’t have to mean some sort of facility (although there are some that are reportedly very good, like one near Rye, NY where the residents are connected enough that they’ve gotten Yo Yo Ma to perform there. Three libraries, lots of activities, tunnels between the buildings with golf carts to take you around if you need them… but of course not cheap). But organizing any kind of group living is fraught, not just the difficulty of finding like-minded people with decent temperaments, but their circumstances can change suddenly (health, finances, needs of relatives).

Dennis and Chris Cavner, in their early 70s, are preparing to move less than two blocks away into a 2,720-square-foot, ranch-style house they bought this year. But first a renovation is underway, taking the 45-year-old property all the way back to its studs. When the work is finished, these baby boomers are confident the move will land them in their forever home.

“We wanted to find a house that we could live in literally for the rest of our lives,” Dennis Cavner said. “We were looking specifically for a one-story house and one that had a flat lot, to age in place.”

For most of American history, people have moved in with relatives or gone to a care facility to live out their final years. Baby boomers don’t want either, and those with resources have generally created the modern idea of remaking old age to fit their lifestyle and retrofitting their homes for aging in place. Design and construction firms are coming up with safety features that look good as well. Think of it as the age-defying home.

Aging in place is a major financial commitment, one that may be at odds with retirees’ plans to downsize their lives and budgets and squirrel away cash in anticipation of rising health care costs. The Cavners are rebuilding this house — assessed at $700,000 around the time of the sale — from a shell. The remodel could easily cost $300,000 in the hot Austin market.

Leaving nothing to chance, the Cavners are paying for a number of modifications they might never need. For instance, neither uses a wheelchair, but contractors are making all doorways 3 feet wide — just in case. The master bath roll-in shower, flat and rimless, will provide room to maneuver. In the kitchen, drawers, rather than cabinets, will allow easy access in a wheelchair.

The Cavners are closely watching details of the renovation, but this dramatic late-life relocation wasn’t a hard decision. 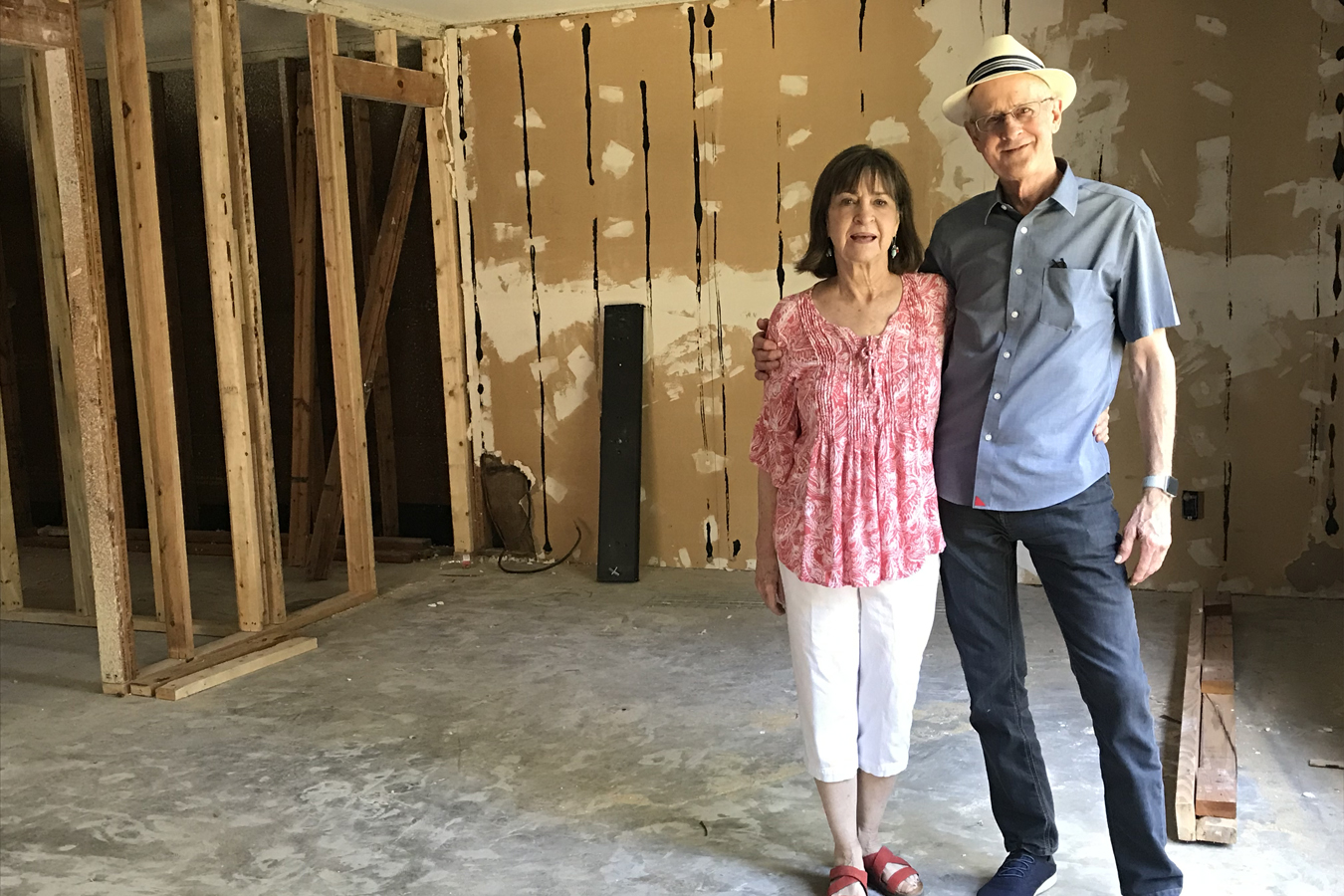 Chris and Dennis Cavner of Austin, Texas, stand inside the shell of a guestroom with a private bathroom. Located at the opposite end of the house from their bedroom, this suite could serve as caregiver quarters if they need assistance as they age. The couple, both in their early 70s, bought this single-level home in February and are remodeling extensively to age in place. (Sharon Jayson for Kaiser Health News)

For some seniors, aging in place might amount to simple modifications, such as adding shower grab bars or replacing a standard toilet with one that sits taller. But many seniors anticipate a financial crunch as they try to plan for their future on a fixed income, uncertain how far their savings and retirement funds will stretch.

A report released last week by the Harvard Joint Center for Housing Studies may fuel these concerns. It cites growing income disparity for older Americans in the wake of the Great Recession, and says “ensuring financial and housing security in retirement will be a struggle.”

For those 65 and older, it said, “the number of households with housing cost burdens has reached an all-time high. By 2050, almost one-quarter of Americans will be 65 or older, according to the Census. Surveys conducted over the past decade show that older adults overwhelmingly want to age in their homes.

Yet many houses aren’t suited to “aging in place,” said Abbe Will, associate project director of the Remodeling Futures Program at Harvard.

“Currently, a lot do not have single-floor living — especially in certain parts of the country. There are lots of stairs and multistory homes when land is more valuable,” she said. And “many homeowners don’t necessarily have the funds to do aging in place.”

Home modifications and costs vary widely — starting with those simple safety features in the bathroom or lever doorknobs throughout the house — to more extensive changes, such as widening doorways or lowering light switches to wheelchair height. Will said simple retrofits, such as grab bars, “could be several hundred dollars,” but a “whole bathroom remodel would be in the thousands or tens of thousands.”

In a recent survey of 1,000 people age 65 and older by the California-based nonprofit SCAN (formerly the Senior Care Action Network), 80% of respondents were concerned about their ability to age in place. The driver appears to be financial: About 60% said they have less than $10,000 in savings (including investments and retirement plans).

“We don’t know what’s coming down the pipeline as we age,” said sociologist Deborah Thorne of the University of Idaho, lead author of a study that found skyrocketing bankruptcy rates among those 65 and older.

The research, recently published in the journal Sociological Inquiry, finds the share of older Americans filing for bankruptcy has never been higher. “And bankrupt households are more likely than ever to be headed by a senior — the percent of older bankrupt filers has increased almost 500 percent since 1991,” the study found.

The Harvard report also cited the burden of debt among those ages 65 to 79, with nearly half of those homeowners carrying a mortgage in 2016. And people are carrying substantially more student loan and credit card debt into retirement as well. 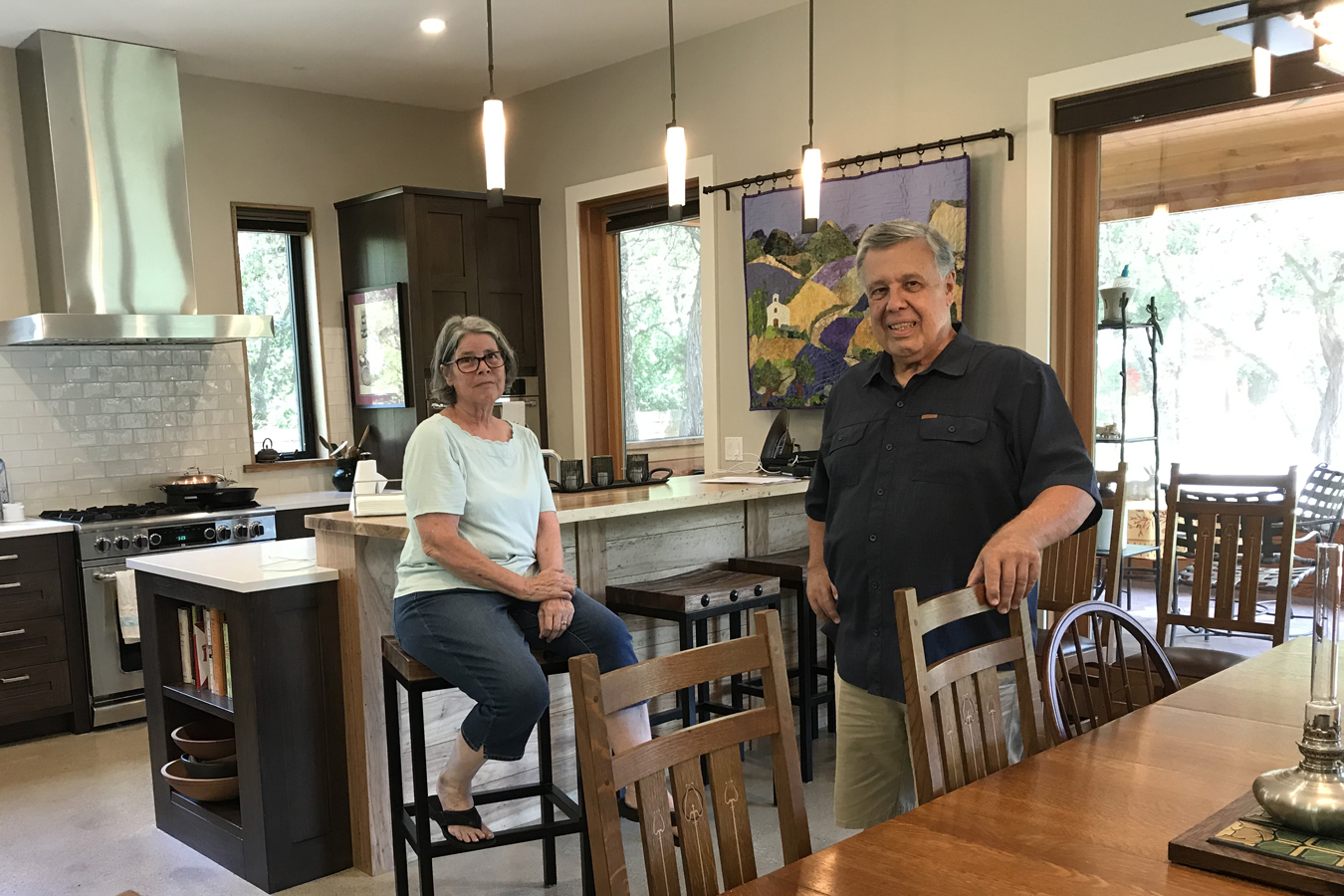 Don and Lynn Dille of Austin, Texas, both in their 70s, built an energy-efficient home to age in place, with hard floors throughout, 36-inch-wide doorways and open living areas for easy maneuvering should either need a wheelchair. (Sharon Jayson for Kaiser Health News)

James Gaines, an economist with the Real Estate Center at Texas A&M University, attributes the increase “to the labor market and employment downsizing and letting older people go first. It can force them into retirement whether they’re ready for it or not. Retirement income may not be enough to carry their debts, and they don’t have enough savings.”

“The leading edge of baby boomers has not hit 75 yet,” said Jennifer Molinsky, lead author of the Harvard report. “When you think about the next five, 10 or 15 years when they’re in their 80s, you’re really going to see the needs shift.”

Molinsky said just what financially challenged seniors should do about housing “is a good question and is a tough question.” Many states have loan and grant programs for home modifications if individuals have a documented disability, she said, yet “what we need more of are programs that help you do this before you need it.”

“We just need options,” she said. “It’s important to think about housing options that help people stay in that community. Low-income people need housing that’s affordable. Some people want to trade that single-family home for a condo. Others want to reassess their money and sell their home for a rental. Not everybody wants the same thing.”

Don and Lynn Dille, both 75, built their Austin home with the intention of staying there for a long time. After living in California, Virginia and elsewhere in Texas, they moved to Austin in 2012 and, within a year, began drawing plans with an architect for an energy-efficient home to age in place. Their home was featured this summer in Austin’s annual Cool House Tour for its design making the most of natural light, cross-ventilation and solar panels, as well as wider-than-normal doorways and level floors for wheelchair use.

One key feature of the construction acknowledges that they might need live-in help down the road to avoid long-term nursing care. Just as the Cavners may convert a bedroom and bath on the opposite side of their new home into caregiver quarters, the Dilles constructed a second floor above their detached garage that could convert into living space.

“We think having a separate apartment where we could have a caretaker or part-time help to maintain our property makes us able to stay where we’d like to be and be independent,” said Don Dille, who retired from the federal government.

The renovations are meant to meet very personal needs, but that doesn’t mean they wouldn’t appeal to others and even add to the resale value down the road.

For his part, Cavner, an investment adviser and co-founder of a new health care startup, said he believes what they’re spending to renovate the house for the years ahead will prove a sound investment: “The modifications we’re making are not going to make it less desirable. It will feel more spacious.”