This is Naked Capitalism fundraising week. 1409 donors have already invested in our efforts to combat corruption and predatory conduct, particularly in the financial realm. Please join us and participate via our donation page, which shows how to give via check, credit card, debit card, or PayPal. Read about why we’re doing this fundraiser and what we’ve accomplished in the last year, and our current goal, more original reporting.

Yves here. Since I suspect many of you read earlier editions of Robert Shiller’s Irrational Exuberance, it would be nice if somewhere the author of the post acknowledged that (both the 5 and the 2015 new editions added topics and updates). I reviewed the original edition in 2000. We discussed Greenspan in that piece, and interestingly, Stefano Micossi explicitly discusses the role of the Greenspan put. In ECONNED, we fingered overly lax monetary policy in the dot-com bust era and the Greenspan (and later Bernanke) put as contributors to the crisis.

This post, however, draws a useful distinction between a bubble and a mania.

By Stefano Micossi, Director General, ASSONIME; Honorary Professor College of Europe; Member of the Board of Directors of Unicredit and chairman of the Board Committee for Corporate Governance, Nomination and Sustainability; Chairman of the School of European Political Economy, LUISS. Originally published at VoxEU

Robert Shiller’s influential book, Irrational Exuberance(Shiller 2015), dealt powerful blows to the hypothesis of efficient capital markets by describing in remarkable detail the psychological (‘irrational’) mechanisms driving investors’ decisions. One important conclusion of his work is that bubbles are random exogenous phenomena that cannot be foreseen and do not depend on macroeconomic policies. In a new CEPR Policy Insight, Alessandra D’Onofrio, Fabrizia Peirce and I throw light on the root causes of speculative fevers in asset markets and related financial booms and busts (Micossi et al. 2019). We show empirical evidence indicating that Shiller may have overlooked the role that lax monetary policy played in triggering financial bubbles in the 2000s by offering investors a perverse promise of ever-increasing asset prices.

The standard definition of an asset price bubble is a large and long-lasting deviation of the price of some assets – such as a stock, a bond or a house – from their ‘fundamental value’, which is the expected discounted income or other benefit and valuation increase over the holding time-horizon (Kindleberger and Aliber 2005, Blinder 2013). While the definition is conceptually clear, in practice it is very difficult to identify a bubble. What may appear ex post as a bubble, after an ensuing price crash, may have been seen ex ante as a rational investment by many sophisticated investors.

Manias are a broader phenomenon that may be characterised as a general atmosphere of euphoria, simultaneously boosting asset prices, consumption and investment spending, and the broad participation of all social layers in the speculative wave. Typically, spending surges because credit is plentiful and ready to accommodate most extravagant undertakings. Thus, in the past century, real estate bubbles were repeatedly and significantly related to the multiplication of super-skyscrapers.

Figure 1 – based on data built by Shiller himself – offers a useful basis to distinguish bubbles from manias. It depicts a main stock market price index together with Shiller’s measure of investors’ expectations on the future evolution of current stock prices. As may be seen, the rapid rise in stock market prices since the mid-1990s, up until the peak in 2000, went along with a declining share of investors expecting further price rises, indicating that investors maintained healthy differences of opinion. On the other hand, starting in 2003 rising stock prices seemingly go together a rising share of investors expecting further price increases. This convergence in investors’ expectations may be taken as the distinguishing feature of manias, whereby not only do stock prices lose contact with underlying fundamental values but also an increasing number of investors start dreaming of ever-increasing prices of a broad range of assets. 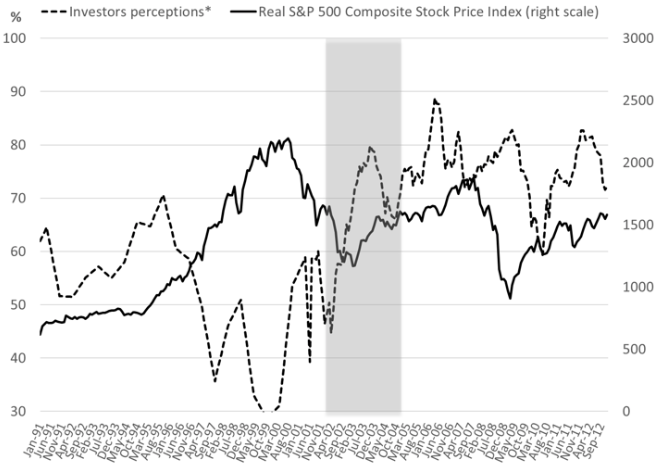 Note: * Percentage of investors believing market is not too high.
Source: Shiller.

This distinction is useful in order to appreciate the quality and the consequences of financial excesses, whereby bubbles are frequent but less harmful, while manias are rarer but lead to more dramatic dislocations in the financial system and the real economy. Shiller (2015) tables 25 episodes of extraordinary stock price increase and decrease (over one-year and five-year time horizons) in the three decades from the 1970s to the 1990s, which he sees as random and unpredictable events. Kindleberger and Aliber (2005) devote special attention to the two episodes, in the late 1920s and 2000s, which they consider the sole examples of manias and which were followed by much deeper financial dislocations and economic depressions. In their view, bubbles and manias are monetary phenomena, liable to be explained by massive excess liquidity.

In the 1950s Hyman Minsky developed a theory of financial instability – centred on the procyclical role of credit supply – that fits pretty well the events that, in 2008-09, led the capital markets in the main financial centres to a near meltdown (Minsky 1984). During the expansion phase, investors revise upwards the expected profitability of a wide range of investments and accordingly raise their demand for credit. At the same time, lenders take an increasingly benign view of the risk of individual investments and become more willing to lend. When economic conditions worsen, both investors and lenders retrench. In this process, the behaviour of heavily indebted borrowers assumes special importance: when the economy slows down and asset prices go into reverse, those who borrowed short to purchase real and financial assets, seeking quick gains from valuation increases, may become distressed sellers and transform the downward price adjustment into a rout.

An important ingredient in the pro-cyclical expansion of credit is a ‘displacement’, i.e. some exogenous shock sufficiently large and pervasive to improve perceived profit opportunities and the economic outlook at least in one important sector of the economy. Kindleberger and Aliber (2005: 64) described how “speculative manias gather speed through expansion of money and credit”, concluding that, while most expansions of credit do not lead to a mania, every mania appears associated with a strong expansion of credit.

Figure 2 sheds further light on the distinction between bubbles and manias, showing that the rising cycles in (US) stock prices build up slowly, over several years and even decades; occasionally, they were interrupted by sharp drops but then resumed in earnest, subsequently reaching new peaks. Another feature worth noting is that the variability of GDP growth has diminished markedly after WWII, while the oscillations in stock prices – relative to earnings – have widened. Both phenomena may be related to the rise in macro-policy activisms; in particular, monetary policy was used aggressively to cushion stock market falls and their impact on economic activity, indeed more aggressively over time. 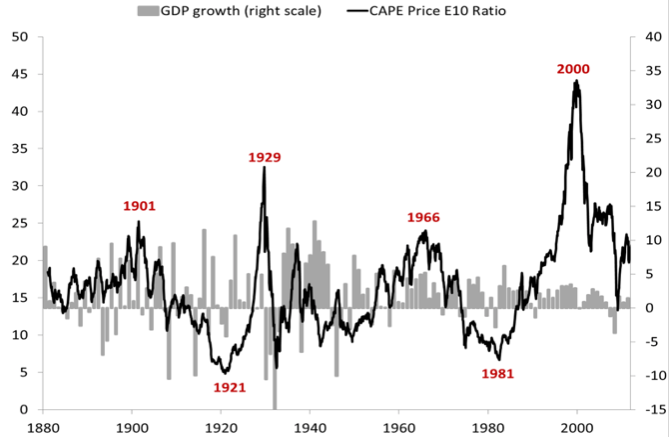 Sources: Shiller and Conference Board.

For the two major financial crises highlighted in Figure 2, stocks, bonds and real estate markets were all part of the same madness. As prices rose rapidly, increasing shares of the population became involved, hoping to partake in the enormous gains seemingly at hand and compounding mounting financial imbalances with their leveraged investments. The interconnections between intermediaries and markets aggravated the subsequent financial crises, as well the fall in economic activity.

As already mentioned, Shiller (2015) attributed the acceleration of price rises for houses and other assets in the decade between the late 1990s and 2006-2007 to psychological factors. Blinder (2013) similarly believed that several factors had been at work in the house price boom among which he saw monetary policy as only “a minor contributor to the boom”. Bernanke (2015) also discusses the same matter extensively. He acknowledged that many Fed Board members, including himself, had underestimated the extent of the housing bubble and the risks it posed but belittled the role of monetary policy in generating the boom.

The view that monetary policy did not play an important role in the asset market boom of the second half of the 2000s appears at odds with Greenspan’s account of events in his memoirs (Greenspan 2007). He describes at length how lower interest rates in credit markets boosted demand for residential real estate and pushed their prices higher and higher through 2006, with new constructions but also secondary sales surging to unprecedented heights; and how the real estate boom fuelled the associated consumption spree.

More important, the Fed’s pattern of not intervening when stock prices were rising, while providing ample liquidity to support the market when stock prices fell, resulted in the investors’ perception of a ‘put’ protection on asset prices – the famous ‘Greenspan put’. Investors increasingly believed that in a crisis or downturn, the Fed would step in and inject liquidity until the problem improved. As the Fed did so repeatedly, that perception became firmly embedded in asset prices in the form of higher valuation, narrower credit spreads, and excess risk taking.

And indeed, as may be seen in Figure 1, the first large upward jump in the 2000s in the investors’ expectation curve coincides with the early phase of the Fed expansion, in 2002 and 2003; further jumps accompanied the continuing rise in the stock price index, as monetary policy was tightened moderately, but never enough to dampen the speculative fever. Euphoria found further fuel when Bernanke stepped in as Chairman of the Fed Board and confirmed his predecessor’s policy approach.

Comparison with the experience of the 1920s provides some confirmation for this interpretation. A similar event to the ‘Greenspan put’ may then have been the visit to New York, in 1928, by three prominent European central bankers who managed to convince the Federal Reserve that looser monetary conditions in the US were essential for preserving the Gold Standard internationally. The message to investors was clear. The Fed would be constrained not to raise interest rates for an indeterminate future. According to Professor Lionel Robbins “from that date, according to all evidence, the situation got completely out of control” (quoted in Galbraith, 1954: 39).