We at NC have no particular love for Google: They’ve downranked us, because we’re small (i.e., not “authoritative”), but also presumably because our links aggregation features compete with their pathetic and poorly sourced News feature[1]. And Yasha Levine asks a good question: “If the Internet is truly such a revolutionary break from the past, why are companies like Google in bed with cops and spies?” Nevertheless, blogging — just to lift the curtain a little, here — is all about production, and so if Google is the best for production, well, not everybody’s hands are always clean. But as Google search became increasingly crapified — losing its memory, and refusing to find material I am 100% sure exists, because I wrote it, without coaxing — and Google’s UI/UX became increasingly ugly and instrusive, a tipping point was bound to come, where Google was no longer the best, at least for me. I think that tipping point has now arrived.

So I am shifting to a European search engine called Qwant, on grounds of user experience, freedom from Google’s algorithm, and most importantly, privacy (I know we have a lot of DuckDuckGo (DDG) users here, and I’ll discuss that platform briefly in context as we go along.) A little bit about Qwant the company:

Qwant is a European web search engine, launched in July 2013 and operated from Paris. It’s the only EU-based search engine with its own indexing engine. It claims not to employ user tracking and doesn’t personalize search results in order to avoid trapping users in a filter bubble…. The website processes well over 10 million search requests per day and over 50 million individual users a month worldwide… As of March 2019, Qwant is the 41st most visited website in France and the 879th most visited website in the world.

Like Google, Qwant monetizes searches by serving ads alongside results. But unlike Google these are contextual ads, meaning they are based on general location plus the substance of the search itself; rather than targeted ads which entail persistent tracking and profiling of Internet users in order to inform the choice of ad (hence feeling like ads are stalking you around the Internet).

Yet up until 2006 Google also served contextual ads, as [Tristan Nitot, VP of advocacy]points out, before its slide into privacy-hostile microtargeting. “It’s a good old idea,” he argues of contextual ads. “We’re using it. We think it really is a valuable idea.”

There’s a lot about today’s Internet that we could roll back, and further back than 2006, too. With that, let’s look at the platform. 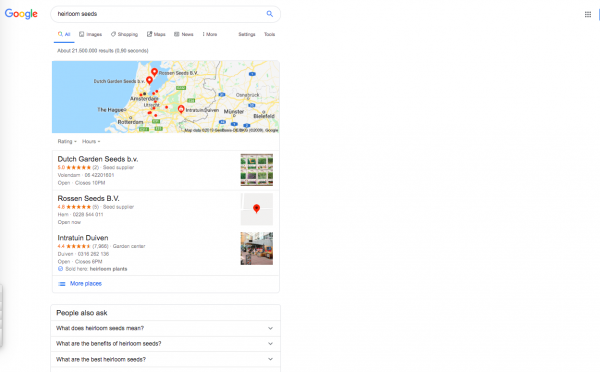 Notice that my search results — Google thinks I’m in the Netherlands because of my VPN, which I am not turning off — aren’t even visible at the top of the page, which is taken up links that assume, in essence, that I’m at Google because it’s a shopping site, followed by a bunch of useless questions that I’d ask for myself if I wanted answers to them. Contrast Qwant: 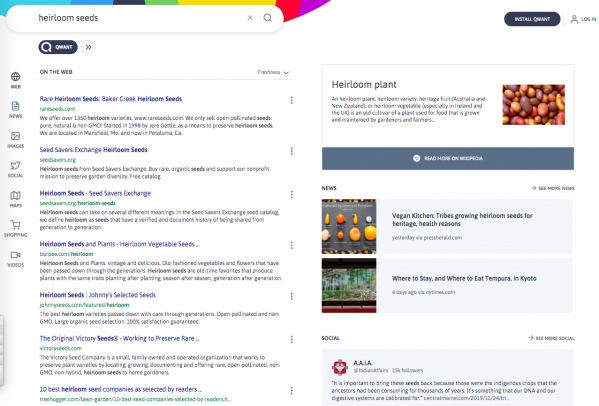 Look! My search results! (Plus, that link to Indian Affairs at bottom right is really neat; maybe if Google weren’t trying so hard to sell me, it would give me a similar result.) Now, DDG has a clear results page too, even if it does have an ad on the top driving down the real results, but here is a feature Qwant has that nobody else has:

See that “ncl”, and the URL for NC as a dropdown? I have a use case, that I perform literally hundreds of times a day, where I need to search NC to avoid duplicate content (here, a post or link on “liquid cats”). It gets really, really old typing in the NC URL over and over again (or copying and pasting it from somewhere), so it’s really great that Qwant’s search box allows me to use the Mac’s text macro facility, where typing “ncl” expands to the URL. Blogging is production, remember>> I can’t do that in Google (or DDG either):

Google hijacks the search box for its stupid auto-completion dropdown.

In the United States, privacy law is a dead letter. Not so in Europe:

Qwant is a French search engine. As such it is governed by the European privacy law GDPR (General Data Privacy Regulation). This regulation puts users in control of their data and how it’s used.

We don’t use any cookie nor any tracking device that may allow us to track your browsing habits or to establish your profile. You are of course entitled to the rights provided by the EU General Data Protection Regulation (“GDPR”), but we also forbid ourselves from collecting an important amount of data that others collect, which are useless to provide you with the services you need.

When you use Qwant as a search engine, we don’t put any cookie on your browser that may allow us or others to recognize you or to follow you everywhere on the Internet. We don’t use any tracking device (pixel, fingerprinting…). We don’t collect and we don’t store any history or your searches. When you search, your query is instantly anonymized by being dissociated from your IP address, in accordance with what the French data controller advices. Long story short, what you are doing with Qwant is part of your privacy and we don’t want to know.

What the GDPR can do:

Qwant is governed by the European General Data Protection Regulation (GDPR), which grants specific rights related to your personal data when processed by Qwant:

This is an advantage over DDG, located as it is in the United States[2]. Qwant has also released its source code:

To be transparent, Qwant has released its source code so third-parties, like the French National Data Protection Body (CNIL), can certify its non-tracking policies and see it’s not collecting data it’s also shared their code with white-hat hackers for security reviews. This year, the company hope to open source its algorithms to ensure anyone can verify its privacy practices.

In an interview, Eli Pariser of MoveOn describes a “filter bubble” (the interviewer: “Did you know that Google takes into account 57 individual data points before serving you the results you searched for?”) Pariser:

Your filter bubble is the personal universe of information that you live in online — unique and constructed just for you by the array of personalized filters that now power the web. Facebook contributes things to read and friends’ status updates, Google personally tailors your search queries, and Yahoo News and Google News tailor your news. It’s a comfortable place, the filter bubble — by definition, it’s populated by the things that most compel you to click. But it’s also a real problem: the set of things we’re likely to click on (sex, gossip, things that are highly personally relevant) isn’t the same as the set of things we need to know.

[T]here’s not much need for a better mousetrap, because the standard trap does incredibly well, killing mice 90% of the time.

The reason is simple: Mice always run the same route, often several times a day. Put a trap along that route, and it’s very likely that the mouse will find it and become ensnared.

(Note that Google’s filter bubble applies to logged-out and incognito users.) Obviously, if Qwant doesn’t build a profile on me, it can’t put a filter bubble round me, so I get organic search results instead of whatever brain parasites Google has in mind for me.

It’s been a long time since I’ve written a software review! If Qwant doesn’t work out for me, I’ll come back and do a post mortem!

Most browsers make you select your default search engine from a dropdown. Safari does not support Qwant. Opera (which I use for its VPN) does not, although here is a workaround I installed sucessfully. I tested Firefox, Brave, and Vivaldi: They support Qwant. I don’t know about Chrome, naturally.

[1] Hilariously, Google News is “fact-checked” by the organs of state security: 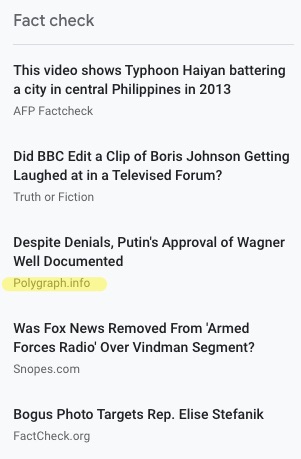 Polygraph.info “is a fact-checking website produced by Voice of America (VOA)​ and Radio Free Europe/Radio Liberty.”

[2] I read the GDPR definition of “data subject” as applying to me, even though I’m not located in the EU or an EU citizen: “A data subject is any person whose personal data is being collected, held or processed.” I would welcome clarification from an experts on EU privacy law in the commentariat. Regardless, I would rather work with a platform designed for GDPR compliance, than one that is not.