Lambert here: As in any complex network, tackle the hubs….

Pharmaceutical companies often market their drugs to highly connected physicians through monetary or in-kind transfers. The column examines how peer influence broadened the influence of the payments for three drugs between 2014 and 2016. Following a large payment, prescriptions for the target drug by the paid physician and the physician’s peers increased, with peer spillovers contributing a quarter of the increase.

Pharmaceutical companies in the US spend $20 billion every year on marketing to healthcare professionals (Schwartz and Woloshin 2019). Almost half of US physicians received an industry-related payment in 2015 (Tringale et al. 2015). The extent of drug marketing to physicians is controversial, and has been extensively covered in national media such as The Atlantic (Elliot 2006) and The New York Times (Carlat 2007). In response, many hospitals have adopted conflict-of-interest policies to reduce interactions between physicians and industry (Grennan et al. 2018).

Much of the public attention and policy response to pharmaceutical payments has focused on widespread small payments, such as purchases of food, beverage, and educational material. These payments are typically valued at less than $30. But we find that a majority of spending was on large dollar payments made to a select group of doctors. The physicians targeted with these large payments tend to be highly connected. We also find the influence of these payments spills over to the many doctors with whom they interact.

Targeting and Impact of Payments

The three new oral anticoagulant drugs are part of a class of blood-thinning agents widely prescribed to patients at risk of stroke, pulmonary embolism, or other blood-clot-related problems. We are able to link data on pharmaceutical payments to detailed insurance claims from Medicare Part D and physicians’ patient-sharing networks.

The US Open Payments database (Centers for Medicare and Medicaid Services 2016) reports that between 2014 and 2016, $103 million in payments to physicians was associated with these three drugs. A third of this money was spent on 1.8 million food, beverage and education payments, for which the median payment size was less than $20. But most of the funding, more than $67 million, went on consulting fees and compensation for services paid to just 1,000 physicians. The median payment in this category is more than $2,000. Most of these doctors received repeated payments.

Patient-sharing patterns identify the network of physician peer relationships. We define two doctors as peers if at least 11 patients visited one doctor and then the other, with no more than 30 days between the two visits. Doctors often have patient-sharing ties with colleagues outside their group practice. Survey evidence from Barnett et al. (2011) corroborates our assumption that peers typically have a recognised professional relationship.

Doctors who receive large payments have more than 60 shared-patient peers on average – more than twice as many as doctors receiving small payments or no payments at all. This finding suggests that large payments are disproportionately targeted at physicians with large clinical practices and many peers.

As we might expect, the impact of each large payment for compensation and services is much greater than the effect of small food payments. Large payments also have indirect effects on peers of paid physicians. Exploiting the variation over time in payment exposure within physician, a large payment leads each of the paid physician’s peers to increase their prescribing volume of the targeted drug by 2% on average (Figure 1).

Figure 1 The impact of peer payments on prescription volume for three US drugs, 2014-2016 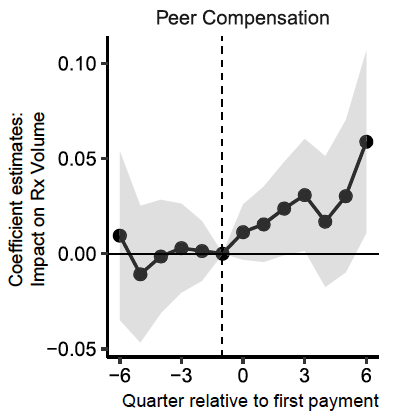 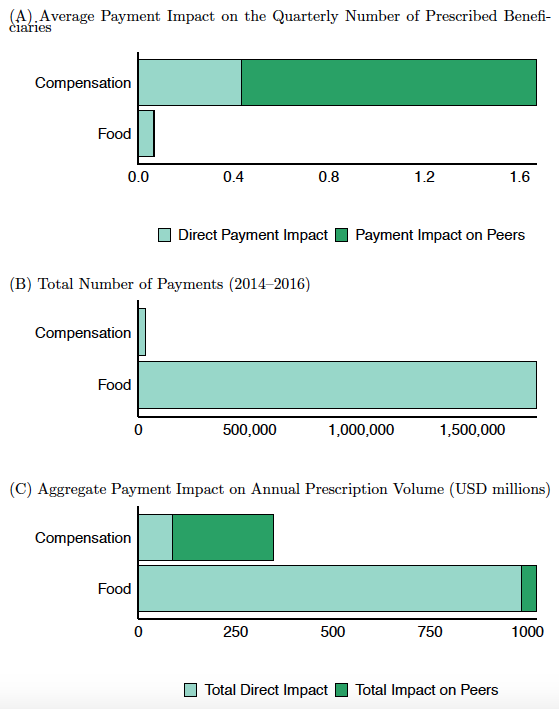 We are able to distinguish three types of physician peer relationships:

We find a similar magnitude of spillover influence for all three types of peer ties. This finding that peer spillovers extend beyond organisational boundaries suggests that the mechanism for influence does not rely on formal policies or direct exposure to the marketing activity.

To understand whether stricter regulation of pharmaceutical promotions would improve welfare, we also need to know whether these marketing campaigns mean that patients are given more appropriate medication. We find no evidence that doctors reduced the volume of anticoagulant prescriptions to patients who are at high risk of severe side effects, according to popular clinical guidelines. The process of drug company representatives visiting to individual doctors to provide information about their company’s drugs, known as ‘detailing’, does not seem to involve the dissemination of nuanced information about patients’ clinical appropriateness.

On the other hand, Carey et al. (2015) find that physicians receiving more payments are more likely to select the most efficacious drug within a class, and are equally quick to switch to generic drugs when generics enter the market. Shapiro (2018) finds no evidence that detailing increases off-label prescribing.

This evidence suggests that the welfare impact of pharmaceutical marketing may depend on the specific setting. If payments are promoting new drugs that are highly effective relative to incumbent therapies, pharmaceutical payments may improve patient welfare. In other instances, payments may reduce welfare by leading to wider adoption of more expensive drugs over similarly effective alternatives, or by increasing a drug’s use in cases for which it is not clinically appropriate.

Given the strength of peer influence patterns, hospital-level policies limiting payments will only partially reduce their doctors’ exposure to marketing. Without global limitations on payments, marketing efforts can still reach many unpaid physicians who share a professional network with paid doctors.

References available at the original