Patient readers, this will be an abbreviated Water Cooler because I have struggled into my yellow waders to go through Trump’s letter to Pelosi. Since we have a new poll, I’ll include those, and also a conversation starter on politics. Talk amongst yourselves! –lambert

Here is a second counter for the Iowa Caucus, which is obviously just around the corner:

Alert reader dk (not to be confused with DK) is in the process of developing the following interactive chart.

Nationally, we have a new poll from Ipsos as of 12/23/2019, 11:00 AM EST, unfortunately not after the debates. The pattern of Biden first, Sanders strong second, then Warren and Buttigeig is stable, though Undecided took a chunk from everyone; in fact, the only candidate really rising is Buttigieg.The top four seem to be an established pattern (or, if you prefer, narrative). On to Iowa, which is looking quite close (and given Pelosi’s impeachment scheduling, which will take Senators off the trail, Sanders may be quite far-sighted to work so hard in California). 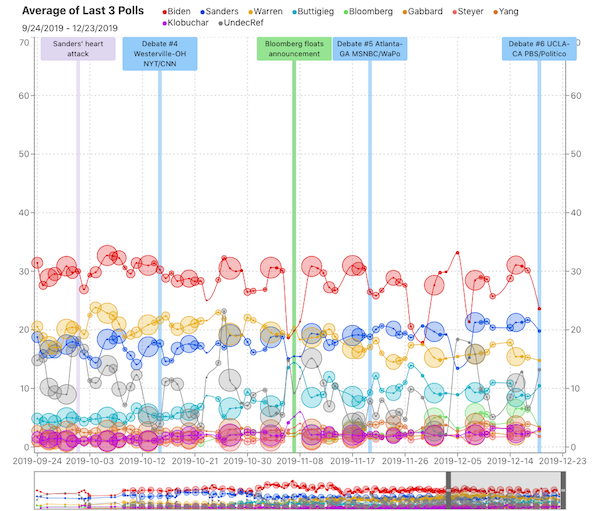 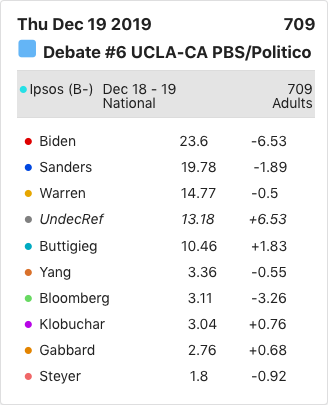 To repeat: It would be nice if we didn’t have an enormous gap between the debate and the next round of polling, though truth to tell, I don’t know either how long it takes for the biomass to assimilate poll results, and I also don’t know if Xmas and the holidays will have an effect.

CAVEAT I think we have to track the polls because so much of the horse-race coverage is generated by them; and at least with these charts we’re insulating ourselves against getting excited about any one poll. That said, we should remember that the polling in 2016, as it turned out, was more about narrative than about sampling, and that this year is, if anything, even more so. In fact, one is entitled to ask, with the latest Buttigieg boomlet (bubble? (bezzle?)) which came first: The narrative, or the poll? One hears of push polling, to be sure, but not of collective push polling by herding pollsters. We should also worry about state polls with very small sample sizes and big gaps in coverage. And that’s before we get to the issues with cellphones (as well as whether voters in very small, very early states game their answers). So we are indeed following a horse-race, but the horses don’t stay in their lanes, some of the horses are not in it to win but to interfere with the others, the track is very muddy, and the mud has splattered our binoculars, such that it’s very hard to see what’s going on from the stands. Also, the track owners are crooked and the stewards are on the take. Everything’s fine.

I think dk has started a really neat project, and in the near future we’ll seek your feedback (within reason) for the tool “live.”

And the conversation starter:

“Obama talks up Warren behind closed doors to wealthy donors” [The Hill]. “[F]ormer President Obama has gone to bat for Warren (D-Mass.) when speaking to donors reluctant to support her given her knocks on Wall Street and the wealthy. And if Warren becomes the nominee, Obama has said they must throw the entirety of their support behind her. The former president has stopped short of an endorsement of Warren in these conversations and has emphasized that he is not endorsing in the Democratic primary race. But he also has vouched for her credentials, making it clear in these private sessions that he deems her a capable candidate and potential president, sources say.” • So, shoring up the Democrat relationship with the donor class by making Warren relatable, a highly suitable role for any ex-President, as Jimmy Carter showed. Oh, wait..

Readers, feel free to contact me at lambert [UNDERSCORE] strether [DOT] corrente [AT] yahoo [DOT] com, with (a) links, and even better (b) sources I should curate regularly, (c) how to send me a check if you are allergic to PayPal, and (d) to find out how to send me images of plants. Vegetables are fine! Fungi and coral are deemed to be honorary plants! If you want your handle to appear as a credit, please place it at the start of your mail in parentheses: (thus). Otherwise, I will anonymize by using your initials. See the previous Water Cooler (with plant) here. Today’s plant (Lee): 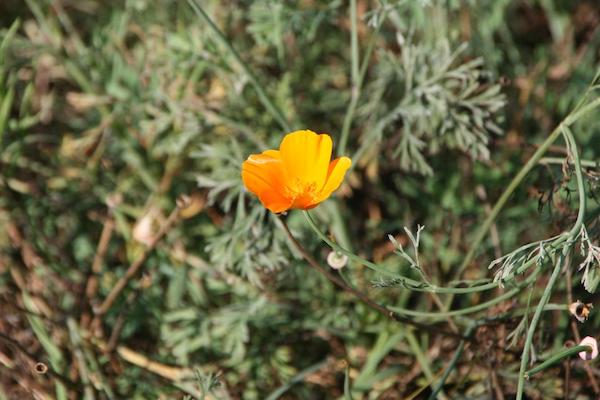 Lee writes: “In Alameda, California a poppy blooming in November, later than is typical. Late bloomers are possibly earlier adapters to climate change.”