Yves here. This piece on batteries and other energy storage approaches covers quite a lot of ground in a relatively short space. Notice in particular its discussion of projected growth in demand….which only reinforces my view that what we need most is radical conservation, but that is highly unlikely until it is forced upon us when we need to have gotten serious about it already. It’s discouraging to see this article discuss the need for enormous new infrastructure to accommodate the energy demands of electrical cars, yet not acknowledge the carbon cost of that.

By Philip Warburg  an environmental lawyer and former president of the Conservation Law Foundation, who is the author of Harvest the Wind: America’s Journey to Jobs, Energy Independence, and Climate Stability. On twitter: @pwarburg.. Originally published at Yale Climate Connections

As calls mount for an electricity future substantially reliant on renewable energy, how can we cope with the variability of solar and wind power? Households, businesses, and industries all want to access power in a timely way – not just when the sun is shining or the wind blowing.

Demand-response measures can modulate electricity consumption for uses as small as household appliances and as large as commercial heating and cooling. Time-of-use electric rates can provide a financial incentive for utility customers to shift key uses to non-peak hours. In addition, utilities can offer discounts to customers who grant them a degree of remote control over the operation of power-consuming functions such as air conditioning, electric vehicle charging, and commercial refrigeration.

Smartly timed use of electricity can play an important role in stabilizing a grid reliant on renewable energy, but a robust investment in energy storage will also be essential. Solar power today accounts for a modest 2.3% of U.S. electricity; wind provides about 6.5%. Making the leap from these modest numbers to a mid-21st century America powered primarily by renewable electricity will require development of safe and affordable ways to store vast amounts of power.

A Brief Overview of Energy Storage

Energy storage has been used for decades to accommodate fluctuations in electricity demand that baseload power plants – particularly those running on coal and nuclear – cannot ramp up quickly enough to address. Pumped storage is one technology that meets this need, taking water from a lower-elevation reservoir or a flowing water source and pumping it to an upper basin where it becomes a source of supplemental hydropower. Pumped storage plants total 22.9 gigawatts in capacity nationwide – more than any other energy storage resource. Yet most of these plants were built between 1960 and 1990, and no new ones are under development. Siting challenges are among the obstacles they face. 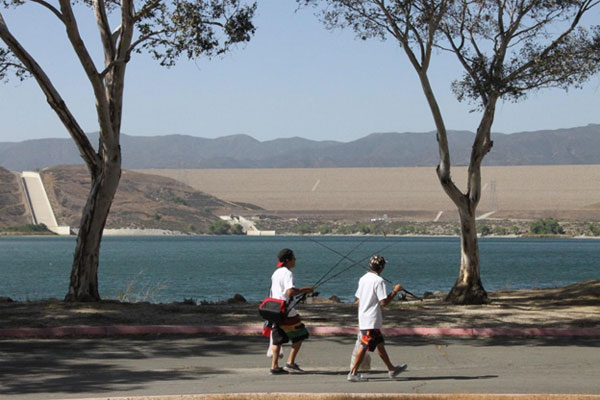 Far less commonly used are utility-scale flywheel systems, only three of which now operate in the U.S. Flywheels convert electricity to stored kinetic energy that can be released within milliseconds to ensure stable voltage on the grid. They cannot, however, deliver a sustained stream of energy over longer periods – multiple minutes, hours, or days. That constraint, along with the bankruptcy of one industry leader, has slowed flywheel deployment, currently yielding just a few tens of megawatts of storage capacity.

Pumping compressed air into underground cavities is another storage technology that has drawn some attention, but only one such facility has been built in the U.S. Molten salt is used as a storage medium for heat captured by sun-tracking mirrors at a small number of concentrating solar power plants in the Southwest. However, both of these storage technologies face high operating costs and technical hurdles that have dimmed their prospects for broader introduction. 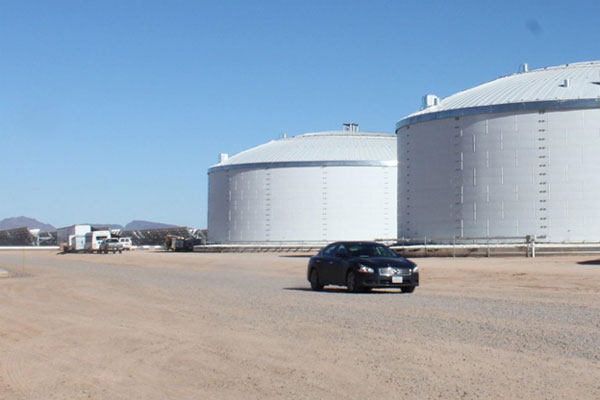 The Rise of Electrochemical Batteries

To meet the storage needs of a renewable energy-reliant grid, nothing compares with the versatility and scalability of electrochemical battery storage. Batteries can play a critical role in maintaining consistent voltage on the grid – a function called frequency regulation. They can also store energy over multiple hours, accommodating the variable flow of electricity from wind farms and solar plants.

Several other battery storage technologies are emerging, but lithium ion leads the field. The high-energy density (storage capacity per volume) of lithium ion batteries makes them a great match for portable electronics, which is why they are widely used for mobile phones, laptops, and electric vehicles. Though developed for these smaller applications, lithium ion accounts for more than 80% of utility-scale battery storage.

Lithium ion batteries may be widely used, but they have some serious drawbacks. Operating them in high temperatures severely reduces their battery cycle life, so temperature controls are relied on to keep them cool. Those controls, in turn, create a “parasitic” drain on electricity that diminishes their overall efficiency. The flammability of lithium ion electrolytes is an even more serious concern. In addition to much-publicized Tesla vehicle and Samsung smartphone battery fires, a number of utility-scale battery installations have burst into flames, most recently at Arizona Public Service’s McKicken storage facility in April 2019.

Researchers are looking at materials and designs that may be safer, cost less, have a longer battery life, and perform better in hot climates than existing lithium ion batteries. Among the possibilities are lithium-metal, lithium-sulfur, solid-state batteries incorporating ceramics or solid polymers, and “flow batteries” with external tanks that allow for easy expansion of storage capacity. The timeframe for bringing these alternative technologies to full commercialization is uncertain.

Despite the shortcomings of current technology, the growth of U.S. battery storagehas been remarkable. From just a few megawatts a decade ago, utility-scale battery installations reached 866 megawatts of power capacity by February 2019, and total battery storage is expected to approach 4.5 gigawatts of cumulative capacity by 2024 – a significant leap, but still just a fraction of a percent of overall U.S. generating capacity.

To keep pace with the anticipated growth in U.S. renewable energy reliance, a much deeper investment in storage will be needed. As a rule of thumb, the Rocky Mountain Institute calls for longer-duration, inter-day storage equaling 3 to 7% of renewable energy-based electricity production. This capacity will be needed, according to the institute, to safeguard grid stability in the face of the “forecast and demand uncertainty” that will accompany higher levels of solar and wind energy integration.

The dramatic decline in battery prices has made it economical for solar plants to be paired with storage, particularly in states where high electricity rates coincide with policies that call for major infusions of renewable energy. In Hawaii, where fossil fuels from distant sources have driven up the cost of power, a solar-plus-storage plant on the island of Kauai is expected to save 2.8 million gallons of diesel oil annually while supplying 65% of the island’s peak nighttime electric load. It is part of a cohort of new and planned solar-plus-storage facilities that will help Hawaii meet a regulatory mandate requiring 70% renewable energy-based electricity by 2030 and 100% renewable electricity by 2045.

In California, the Los Angeles Department of Water and Power has also committed to making battery storage an integral part of its infrastructure. In September 2019, it approved a power purchase agreement that will provide 400 megawatts of solar power and 1,200 megawatt-hours of battery-stored energy for an astonishingly low price of 3.3 cents per kilowatt-hour, making it a cheaper source of electricity than natural gas. Along with the advantage of favorable economics, this deal was driven by the city’s commitment to deliver customers 100% renewable electricity by 2045.

Along with their utility-scale functions, batteries are emerging as key elements in microgrids – small-scale power systems that can supplement or substitute for grid-supplied electricity. The recent spate of hurricanes and wildfires knocking out grid-supplied electricity has caused civic leaders and contingency planners to focus on ways to ensure basic power to schools, community shelters, healthcare facilities, and public safety providers. Military planners are also looking at microgrids as safeguards against the growing specter of cyber-attacks.

Creating “energy islands” by pairing battery storage with solar arrays can create a degree of local energy autonomy if grid power is lost. In the aftermath of the fall 2017 Hurricane Maria, the Puerto Rico Electric Power Authority has mapped out plans for a network of eight microgrids reliant on solar plus storage that could function independently of the island-wide grid during outages caused by major storms.

Energy analyst Richard Stuebi calls this integration of microgrids into a broader utility framework a “‘grid of grids’ architecture” – valuable in responding to cyber-threats as well as extreme weather events.

The National Renewable Energy Laboratory has modeled the electricity needed to meet total U.S. demand by 2050. Its lower-end “reference” scenario presumes low adoption of electric vehicles (accounting for just 8.3% of total vehicle miles traveled) and a gradual shift toward electric-powered buildings. These and other factors, including population growth, would boost mid-century electricity consumption by 25%.

NREL’s high-end scenario projects much fuller penetration of electric vehicles (more than 80% reliance on electric cars and light-duty trucks plus substantial electrification of heavier-duty vehicles), widespread electrification of buildings, and a shift to electricity by major industries. If these conditions prevail, the U.S. will annually consume at least 6,500 terawatt-hours of electricity – a 62.5% increase from 2016 levels.

Keeping pace with this enormous growth in electricity demand while transitioning to renewable energy will demand a huge investment in new infrastructure. As the U.S. builds new solar arrays, wind farms, and battery storage facilities, the strains of skyrocketing demand for difficult-to-extract minerals such as lithium, cobalt, and rare earths will increase. Concerns are mounting about worker exploitation and environmental harms in countries where mining and manufacturing activities are poorly regulated.

The successful rollout of energy storage will demand vigorous research into battery technologies that can deliver reliability and durability while minimizing the need for scarce resources. Regulation of environmental impacts and workforce protections will be essential. It will also be critical to look beyond existing battery technology to innovative forms of non-battery storage that may ultimately be cheaper and less harmful to the environment.

A sampling of services provided by battery storage
Battery storage offers a variety of services that can reshape utility infrastructure and ease the way toward greater renewable energy reliance. For instance …

Frequency regulation: Ensuring a constant voltage very close to 60 Hertz is essential to grid stability – a challenge that will become harder as wind and solar power’s contribution to the power supply grows. It’s no surprise that 88% of utility-scale U.S. battery storage is already dedicated to ensuring this stability.

Shifting energy to match daily peaks: “Solar after Sunset,” an initiative of Arizona’s biggest utility, Arizona Public Service, will rely on 850 megawatts of new battery storage to ensure that solar-generated power will be available during hours of peak electricity demand, from the late afternoon to early evening.

Accelerated closure of coal and gas plants: In the Mountain West, the 2019 Integrated Resource Plan of utility giant PacifiCorp calls for the retirement of 16 coal-fired units by 2030, substituting large-scale battery storage along with multiple gigawatts of new solar and wind power. In Florida, the 409-megawatt Manatee Energy Storage Center will be paired with solar power to allow Florida Power & Light to close two of its older, under-utilized natural gas plants.

Deferral of new transmission: In Massachusetts, battery storage will supply at least 10 hours of back-up electricity to three Outer Cape Cod communities often hit with power outages. This project will make it possible to suspend plans for a new transmission line that would have run along 13 miles of Cape Cod National Seashore.