The press is finally becoming skeptical of private equity’s claims that it generates superior returns, demonstrated by a Monday Wall Street Journal story, Private-Equity Cash Piles Up as Takeover Targets Get Pricier1 and a Bloomberg article yesterday, ‘Peak’ Private-Equity Fears Are Spreading Across Pension World. This follows a Mark Hulbert piece in MarketWatch, whose title gave the misleading impression that it was just about the proposed KKR acquisition of Walgreens, when it was really a takedown of the prospects for private equity generally, starting with the subhead: No evidence that public companies perform better after being taken private. 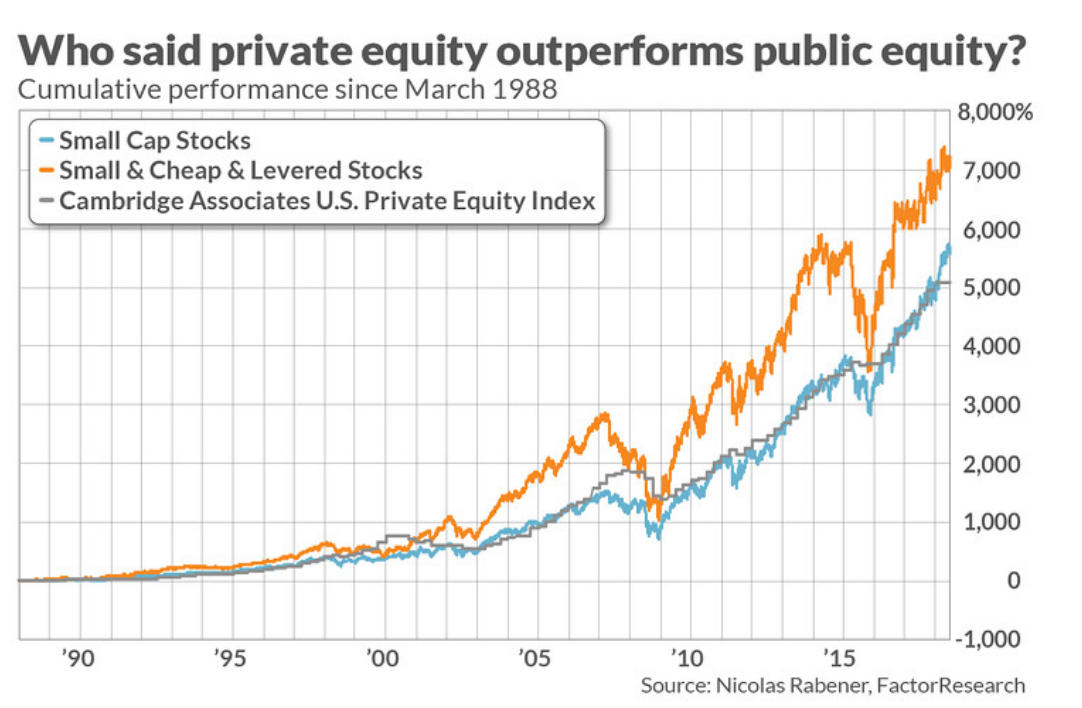 What is striking is investors who have long been captured and desperate, are finally admitting that private equity’s key selling point looks to have hit its sell by date.

While we’ll recap both pieces, they curiously miss that the one of the big drivers of private equity’s success, that of the long-term decline of interest rates that started in 1982, is no longer giving the industry a big tail wind. Declining interest rates boost financial asset prices, with risky assets benefiting the most. Public stocks are the riskiest liquid assets. And what is even riskier? Leveraged equity, which is the exposure you get with private equity.3

We’ve been writing for years about how the private equity industry has not been earning enough to compensate for its additional risks. And has time has passed, the evidence that the returns are not adequate has only strengthened. For instance, Oxford Professor Ludovic Phalippou determined that since the crisis, private equity has not outperformed the stock market. Recall that private equity performance benchmarks for decades have stipulated that private equity needed to beat an equity index, which until recently was typically the S&P 500 index, by 300 basis points.2 In her Congressional testimony last month, Eileen Appelbaum independently confirmed Phalippou’s assessment, that measured on a public market equivalent basis, as opposed to using the misleading internal rate of return measurement, private equity has not outperformed stocks since 2008.

The Fed has made clear it’s not keen about negative interest rates, and in fact has been trying since the 2014 “taper tantrum” to ease its way out of its super low interest rate corner. Private equity returns have faltered not just due to the loss of the extra juice of a long-term trend of lower interest rates, but also desperate long-term investor reactions to negative real yields, which deprived them of safe but profitable long-term investments as a core component of their portfolios, and forced them to put more money on “reaching for yield” strategies like private equity. Since 2004 the share of private equity has more than doubled relative to the global equity market. So the end of return tailwinds has been exacerbated by too much money chasing too few deals.

It is hardly news that private equity valuations have been at stratospheric levels for years. CalSTRS’ Chief Investment Officer Chris Ailman described private equity deals as “priced almost to perfection” in 2015 and concluded: “So it’s a tough time to make investments and hope we make money.”

The Wall Street Journal describes how private equity firms are sitting on a lot of what the industry calls “dry powder,” or committed funds that have yet to be invested.We’ll recap some of the key points in a bit, but the bottom line from the Journal is that the funds are displaying investment discipline because, save for a few sectors, it’s hard to find attractive deals as a result of prices generally being at record levels.

While this is true as far as it goes, this narrow framing unfortunately misses the real story, which is that this phenomenon is yet more evidence of the deteriorating prospects for private equity. The Bloomberg article was far frontal, discussing how pension funds are fretting over faltering private equity returns, when they’d mistakenly pinned their hopes for salvation on them.

The Journal tries to put a pretty face on this picture. But not putting money to work creates two problems. The first is that investing money more slowly will hurt returns as measured by the misleading internal rate of return, and properly measured, would hurt actual returns, since investors will have to park a significant portion of the committed but yet uncalled capital in liquid investments. Second is that investors will also fall short on their asset allocations for private equity. From its article:

The aggregate value of U.S. buyouts fell 25% year to date through October, compared with the same period a year earlier, according to data provider Preqin. Deals totaled $155.2 billion during the first 10 months of the year—the lowest since 2014. 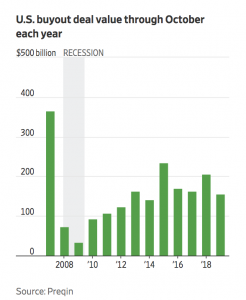 The restraint buyout firms are showing suggests a level of discipline that wasn’t present during the last market peak in 2007, when they struck $365.9 billion worth of deals in the U.S. Many of the companies they bought then struggled during the ensuing global financial crisis, and a number have filed for bankruptcy protection.

The drop in deal activity comes as private-equity firms’ unspent cash dedicated to North American buyouts reaches a record $771.5 billion, up nearly 24% since the end of last year and more than double where it stood at the end of 2014, Preqin data show.

The article tries to find cheery facts. Deal volume is not down, which suggests it’s the big deals where most money is put to work that is flagging. It plays back the sales talk of some of the largest firms as to how they are supposedly finding attractive sectors, and also highlights niches like business software where it’s supposedly possible to find buys.

First, private equity returns are reported on a one-quarter lagged basis. Correcting them to the proper quarter takes away most of the fictive differentiated return profile.

Second, private equity firms have been established to lie about their valuations at predictable times: when raising a new fund and during bear equity markets, and late in a fund’s life, when most of what is left are dogs that need to be written down. Correcting valuations for these misrepresentations would further tighten the correlation.

However, a further complicating factor is that borrowing has become more stringent and pricey too.

The Bloomberg article, by contrast, focuses on investor desperation. Why they are so late to wake up and smell the coffee is beyond me. Industry leaders have been warning for years that returns were likely to fall. That’s one reason they’ve been trying to push into retail, since they’d be dazzled by the chance to finally get past the velvet rope and invest in private equity…because they are the dumbest money.

Similarly, another big warning sign has been the recent fad of longer-dated funds, branded as “Warren Buffet-style investing”. If you are tying up your money longer, you should expect an even higher premium over public stocks than the historical rule of thumb of 300 basis points for the greater illiquidity risks. Yet investors were told to expect lower returns than for traditional private equity. Huh?

The Bloomberg piece has an even better “dry powder” chart: 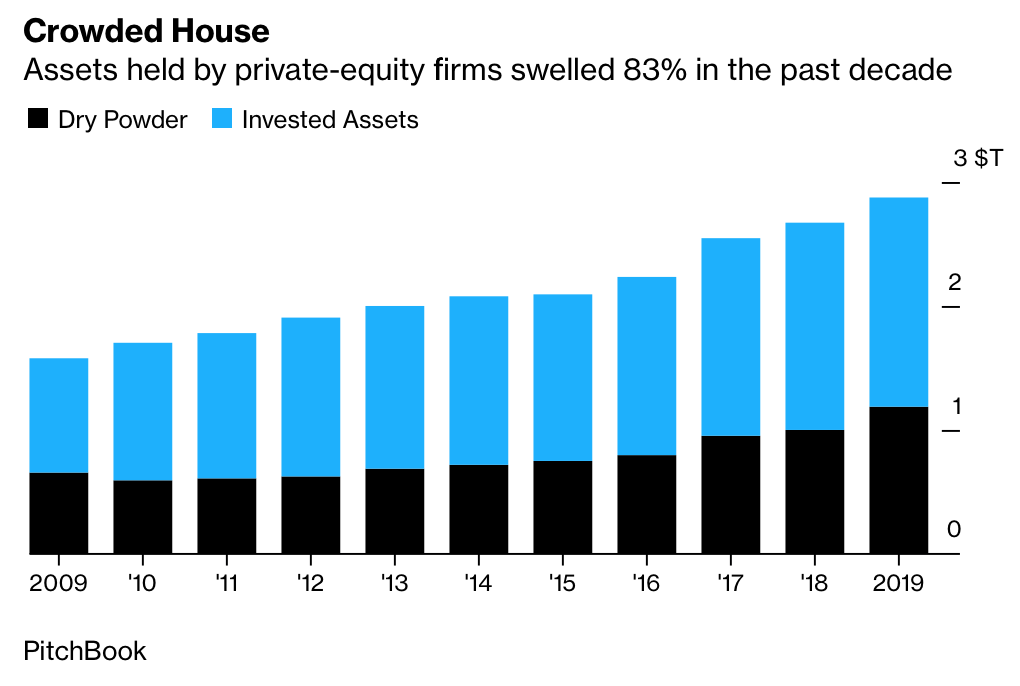 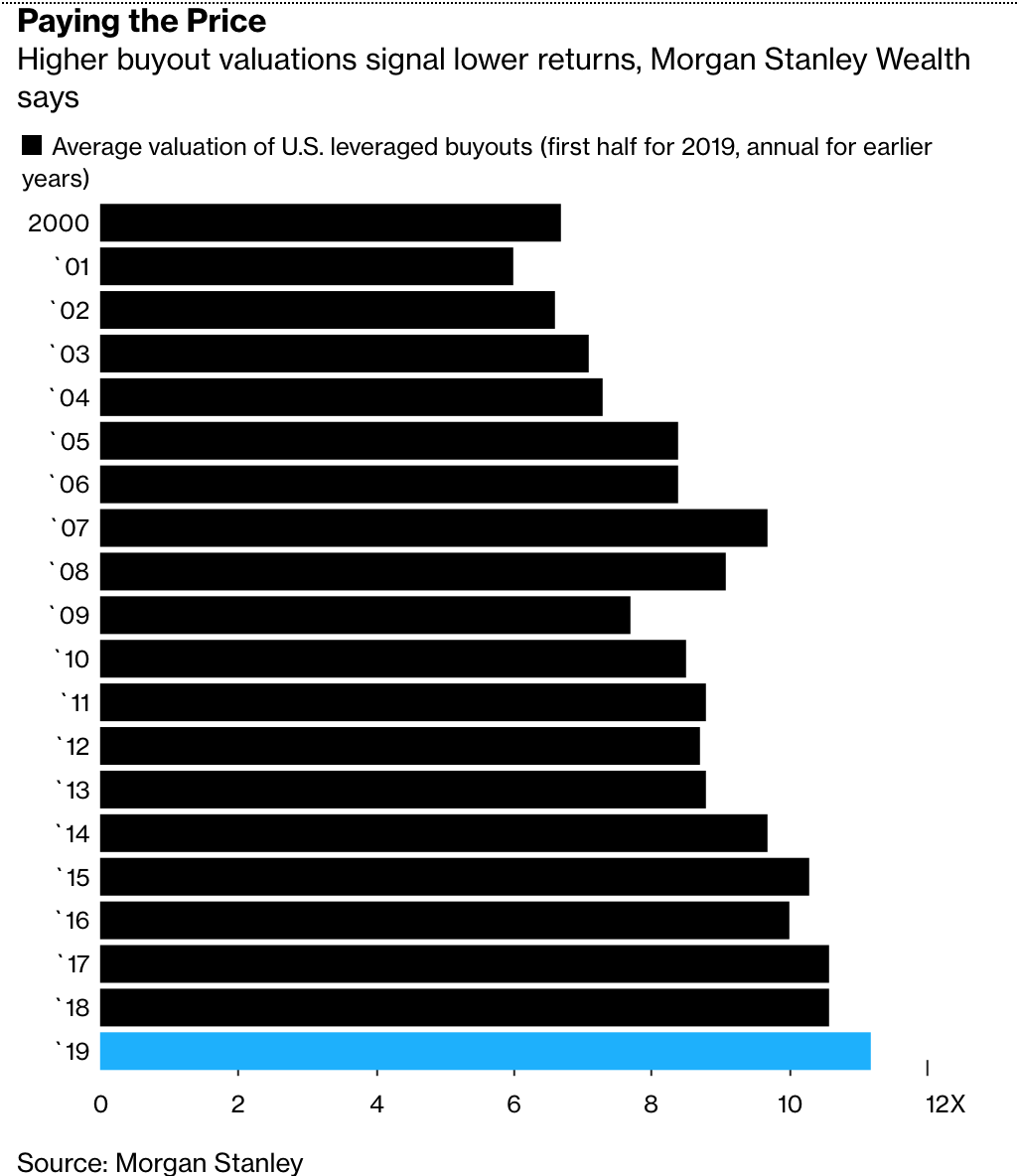 Calstrs chief investment officer Christopher Ailman is uninspired and under-invested. The second-largest U.S. pension had 9.3% of its $242.1 billion of assets in private equity as of Sept. 30, an allocation it plans to raise to 13% eventually. But Ailman is in no rush.

“Everybody is trying to chase what they perceive as the cream of the crop in private equity,” he said in a Bloomberg TV interview in November. “The median private equity portfolio return or GP return is usually actually equal or less than what you can get in public stocks.”

This is borne out by findings from Nicolas Rabener. The managing director of FactorResearch created an index of the smallest small-cap stocks and discovered in research last year that they performed in line with the U.S. Private Equity Index.

However, the article bizarrely praises CalPERS for gaming its benchmarks so as to pretend private equity returns aren’t deteriorating:

California Public Employees’ Retirement Systems reported its PE portfolio delivered 7.7% in the fiscal year through June 2019, down from 16.1% in the previous period. The pension giant foresaw a future of shrinking private-equity earnings two years ago, when the board cut targeted margins above the FTSE All World All Cap index to 150 basis points from 300 basis points.

It would have been nice if someone had sent the memo to the House Financial Services Committee hearing on private equity last month. Republican and money-captured Democrats kept thumping on returns, refused to consult with the one expert in the room, Eileen Appelbaum, and instead kept pumping Wayne Moore of LACERA for the factoid that historically, private equity had been the fund’s best performing asset class. Someone needs to remind them that the past is no predictor of future performance.

1 As too often occurs, the headline is misleading, since it suggests that private equity firms have hoards of investor cash sitting around. Investors in private equity firms, unlike other types of fund management, do not send money when they invest in a fund. They instead agree to send money, usually in five to ten business days, when the private equity fund makes a capital call to investors so it has the equity capital it needs to close on a deal. Investors also agree to pay management fees on a set schedule.

2 Phalippou has pointed out that many investors have switched to other stock indexes because the S&P 500 has been doing better and other indexes are more permissive. From e-mails in 2017:

Phalippou did not need to point out the implication: making the benchmark easier to beat also increases the odd of staffers at limited partners getting performance bonuses.

3 Some loyalists will try claiming that private equity returns do not covary much with public equities. This is false, or more accurately, is true only due to bad accounting.