By Dana Drugmand, a freelance writer and attorney who writes about climate issues. Originally published at DeSmog Blog

Industry groups including oil and gas trade associations were quick to pile on the praise following President Trump’s announcement Thursday, January 9 of major overhauls to the National Environmental Policy Act (NEPA). The 50-year-old bedrock environmental statute requires federal agencies to review the environmental impacts of major actions or projects, and has been a key tool for advocacy groups to challenge harmful infrastructure, from fossil fuel pipelines to chemical plants.

And in the Trump administration’s hasty efforts to assert “energy dominance,” judges have halted fossil fuel projects on grounds that the government did not adequately consider how those projects contribute to climate change.

For the fossil fuel industry, these court rulings, and the environmental law underpinning them, are an annoying setback. The industry has long been irked by NEPA, especially when it is used to delay petroleum-related projects because of climate concerns. In 2010, for example, the American Petroleum Institute commented in a blog post on the Bureau of Land Management delaying an oil and gas lease sale following a NEPAlawsuit that required the agency to study the leases’ climate impacts. “API hopes the review can be done quickly and allow the sale to be held later this year,” API wrote. “Furthermore, API believes that neither NEPA, nor other administrative tools, should be used to regulate greenhouse gas emissions.”

On Thursday, the Trump administration announced major revisions to the NEPAstatute that shrink the scope and timeline of environmental review. Under new regulations proposed by the Center for Environmental Quality, the White House agency that implements NEPA, “cumulative effects” — such as how fossil fuel expansion contributes to climate change — would not need to be considered.

New on the Blog: Every president since Jimmy Carter has talked about the critical need to increase US oil and natural gas production. The US energy revolution made that dream come true. So why do some talk about throwing away all that’s been gained? https://t.co/Xy5Xva3IAl pic.twitter.com/lS8HASgFfT

Several leading Democratic presidential contenders have said they would include a ban on fracking as part of their climate plan.

Elizabeth Warren has pledged to immediately end oil and gas leasing offshore and on public lands, and also to “ban fracking — everywhere.” Bernie Sanders includes a ban on fracking in his comprehensive climate plan, and he repeatedly references via Twitter his commitment to ban fracking. Kamala Harris said during a televised “Climate Town Hall” in September that she would seek to ban fracking as well.

On my first day as president, I will sign an executive order that puts a total moratorium on all new fossil fuel leases for drilling offshore and on public lands. And I will ban fracking—everywhere.

The fact that presidential candidates are even talking about a fracking ban undoubtedly has the petroleum industry concerned, as the new API video implies. The video features former presidents from both political parties, from Jimmy Carter and Ronald Reagan to George W. Bush and Barack Obama, declaring the importance of ending reliance on foreign oil and speaking to progress in advancing domestic petroleum production.

The video, which also features patriotic images like the Statute of Liberty and American flags, concludes with the message: “Support America’s Energy Security. Oppose a Fracking Ban.”

The Trump Administration’s NEPA rollback is a sellout of clean air, clean water and our climate to corporate polluters.

We cannot factor out climate change as we prepare for the future. #ClimateActionNow https://t.co/paKwIIopJ3

The term “effects” is clarified to exclude “effects that the agency has no authority to prevent or would happen even without the agency action.” This essentially eliminates climate change from being a concern that agencies must consider under NEPA. The proposed regulations also facilitate “efficiency” by encouraging categorical exclusions (meaning more projects will not even have to undergo review) and by setting time limits of two years maximum to complete reviews, regardless of the project’s complexity.

The Independent Petroleum Association of America (IPAA) lauded the decision, while also disparaging environmentalists’ efforts to invoke the law. “IPAA is pleased that the Administration continues to tackle substantial projects, such as their effort to return the NEPA process to the original intent and scope of the law,” said Dan Naatz, senior vice president of Government Relations and Political Affairs at IPAA. “Although IPAA and our members recognize the important role NEPA plays in public land policy, for many years we have seen the law being abused by environmentalists with extreme agendas to delay and halt various multiple-use activities on federal lands, including oil and gas production.”

American Energy Alliance (AEA) president Thomas Pyle, a former Koch Industries lobbyist, also alleged that environmentalists have abused NEPA. “Radical environmental groups have twisted the intent behind NEPA and leveraged the legal system to their advantage in a coordinated effort to slow and stop progress and I welcome the news that President Trump plans stop them in his commitment to make America great again,” Pyle said. AEA is the advocacy arm of the nonprofit Institute for Energy Research, whose funding has included API, Koch family foundations, and ExxonMobil.

Another big win and we’re only in the second week of January. https://t.co/rf0hZYQz4o

The National Association of Manufacturers (NAM), whose members include companies like ExxonMobil and Chevron and which in 2017 launched an initiative attacking climate liability lawsuits, also applauded the NEPA overhaul announcement. NAM President and CEO Jay Timmons was at the White House on Thursday supporting the president.

A statement from Timmons following this announcement mentions a NAM blueprint for infrastructure improvements that specifically called for overhauling NEPA. “The NAM’s Building to Win infrastructure plan called for exactly this type of modernization — because our efforts should be used for building the infrastructure Americans desperately need, not wasted on mountains of paperwork and endless delays,” Timmons said. This remark reveals that industry groups have been gunning for NEPA reforms for a while. NAM</’s “Building to Win” strategy was first released in 2016.

Law Changes on the Industry Wishlist

In 2018, groups like IPAA and the American Fuel & Petrochemical Association (AFPM) submitted comments as part of CEQ’s Advanced Notice of Proposed Rulemaking regarding updating NEPA regulations. These groups complained that the current NEPA process is excessively burdensome and costly — concerns that President Trump and CEQ head Mary Neumayr repeatedon Thursday — and they made recommendations like limiting the scope of NEPA analyses that CEQ readily adopted.

But industry trade associations did not limit their NEPA demands to formal comment periods. In November of last year, a coalition of 33 organizations wrote a letter to CEQ urging the agency to “expeditiously proceed with revisions to modernize NEPA implementing regulations.” 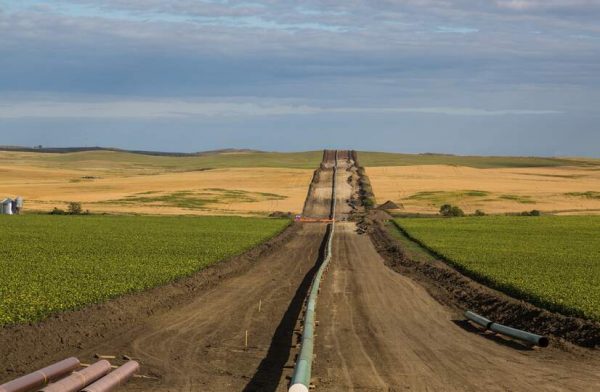 The Dakota Access pipeline being installed between farms, as seen from 50th Avenue in New Salem, North Dakota, in 2016. Credit: Tony Webster,  CC BY SA 2.0

A few weeks later, the National Petroleum Council, an advisory organization made up of oil and gas executives and other petroleum stakeholders, issued a report on “America’s Evolving Oil and Natural Gas Transportation Infrastructure.” The report notes that “NEPA has become a leading basis for challenging agency decisions affecting energy infrastructure,” and calls forsignificant clarification and overhaul of NEPA.

President Trump has now delivered on the industry groups’ demand to weaken a key environmental law. “Today, we’re taking another historic step in our campaign to slash job-killing regulations and improve the quality of life for all of our citizens,” the president said at the announcement.

Environmental groups and Democratic lawmakers slammed the proposal, saying it would hurt citizens and that real beneficiaries are the polluting industries seeking to expedite harmful projects.

“Today’s action is nothing more than an attempt to write Donald Trump’s climate denial into official government policy,” saidSierra Club Executive Director Michael Brune. “Communities across the country are already feeling the effects of climate change, but rather than protect them, Trump is pulling out all the stops to silence their voices and further prop up his corporate polluter friends.”

“The Trump administration would allow powerful industries, like oil and gas extractors, to run roughshod over community interests,” added Dr. Kathleen Rest, executive director of the Union of Concerned Scientists.

The planned NEPA rollback may be the most dangerous attack yet on our health, clean water, and climate.

Trump’s attack on a bedrock environmental law is not a ‘reform’, but another sellout of our clean air and water to corporate polluters.

Senator Ed Markey (D-MA) weighed in on the announcement with a statement under the headline, “Trump Caves to Fossil Fuels in Roll-Back of Bedrock Environmental Protection Law.” Senator Sheldon Whitehouse (D-RI) also called out the fossil fuel industry’s influence. “We didn’t need more proof that the fossil fuel industry has hardwired the Trump administration to deliver on its interests, but we got it anyway,” Whitehouse said.

While industry is cheering the announcement, the actual changes to NEPA may be a ways off. The public has until March 10 to comment on CEQ’s Notice of Proposed Rulemaking, and CEQ still has to hold public hearings on the proposed changes. Lawsuits challenging the regulations are also likely.

“We will use every tool in our toolbox to stop this dangerous move and safeguard our children’s future,” Natural Resources Defense Council president, and former EPA administrator, Gina McCarthy said.