Just about every days brings yet more grim news about threats to the natural world: the horror of climate change, the scourge of plastic, the collapse of biodiversity, and the insect apocalypse, to list only some calamities that’ve popped into my mind.

Science on Friday published some good news: the discovery of five new species and five new subspecies of songbirds on some tiny islands near the Indonesian island of Sulawesi.

This is an unusual find; typically, only about a half dozen new bird species are “discovered” each year, worldwide, dding to the known aggregate of nearly 10,000 species across the globe.

Evolutionary biologist Frank Rheindt at the National University of Singapore had an inkling these remote, forested islands with mountain highlands held an unrecognized wealth of bird life. The islands — Taliabu, Peleng and the Togian group — sit in the middle of Wallacea, a geologically and biologically complex region of Southeast Asia. But deep waters separate the islands from the nearest large landmass of Sulawesi, limiting opportunities for many animals to intermingle across the region. This includes tropical forest birds, which rarely venture out from the shady cover of the forest, let alone fly kilometers over open ocean.

In searching for new species, “it’s very important to pick deep-sea islands,” Rheindt says. “Those are the ones that are likely to have endemic species that are not shared with other landmasses.” Even more encouraging, the islands’ interior highlands hadn’t received much attention from European explorers or naturalists, who instead had focused on the coasts, he says. 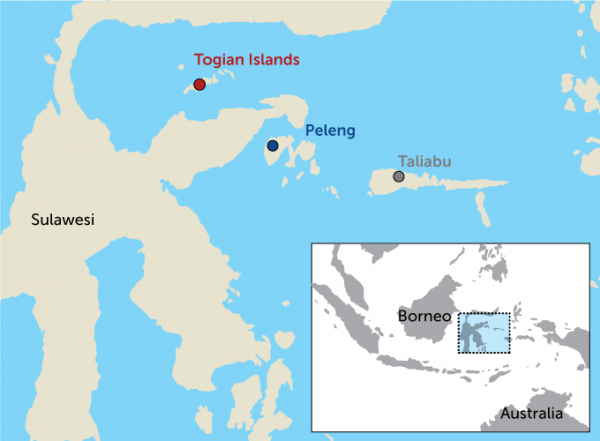 Indonesia figures large in the history of our understanding of the natural world, for it was during travels through the Malay Archipelago in the 19th century that the British explorer Alfred Russel Wallace  interpreted his observations –  and developed what later came to be known as the theory of evolution. Darwin garnered most of the credit for that breakthrough in human thought, although Wallace and he independently developed the theory. According to The Guardian, Alfred Russel Wallace, the forgotten man of evolution, gets his moment:

Alfred Russel Wallace is far from a household name, but he changed the world. Recovering from a bout of malaria on the remote Indonesian island of Halmahera, the young British biologist came up with an idea that would transform humanity’s view of itself: he worked out the theory of natural selection. Wallace wrote down his idea and sent it to Charles Darwin, who had been contemplating a similar theory of evolution for more than a decade. Both versions were read to members of the Linnean Society in 1858.

Today Darwin is the man who gets the lion’s share of the credit for a theory that provides the mechanism to explain how a species can be slowly transformed into another. Wallace has been forgotten…

“I was on a trip to Malaysia a few years ago and discovered there was a huge group of Indonesian islands known as Wallacea, named after Wallace,” [comedian Bill Bailey, a committed fan of the biologist]  told the Observer. “He is still considered to be a hugely important figure there but has been ignored in Britain. I got interested and became absorbed by the man, like so many other individuals have been. There is a sort of secret society of Wallace fans. Mention his name and you create a frisson of interest among these people.

I, too, am a big Wallace fan, and I can recommend his book, The Malay Archipelago, highly. Part travelogue, part scientific tome, the book chronicles Wallace’s adventures during eight years of exploration through what is now Indonesia, Malaysia, and Singapore. Wallace traversed more than 14,000 miles and collected more than 125,000 samples of birds, plants, animals, and insects.

I first read his book whilst traveling in Indonesia, and I found it far more readable than anything Darwin had written. Click on the Project Gutenberg link below, included in The Guardian article about Wallace, and see for yourself.

Wallace formulated what came to be known as “Wallace’s line”, a biogeographic border  that separates distinct distributions of flora and fauna. According to an article in Discover magazine, Mr. Wallace’s Line:

As Wallace described it, the line runs between Bali and Lombok, then continues north between the larger islands of Borneo and Celebes. Wallace recognized that on the west side of his line, Borneo and Bali, although they are islands, are home to representatives of most major groups of Asian mainland species. Many or most of those same groups, however, are absent on Celebes and Lombok, the islands just to the east of his line.

Celebes is now known as Sulawesi, so it’s fitting that this latest songbird discovery should have occurred where it did. And as the New York Times reports, Trove of New Bird Species Found on Remote Indonesian Islands:

Andrew Berry, a lecturer on evolutionary biology at Harvard University, said via email that Wallace would have loved the new study, because it targeted the same types of locations — remote and geologically unusual — that Wallace favored during his exploration of Southeast Asia from 1854 to 1862.

“Wallace was extraordinarily prescient about this,” he said, “complaining as early as 1863 that his fellow Victorians were hypocrites in their insistence, as creationists, that each species was the handiwork of God, yet all the while failing to lift a finger to conserve them.”

In an essay, Wallace wrote that:

Future ages will certainly look back upon us as a people so immersed in the pursuit of wealth as to be blind to higher considerations. They will charge us with having culpably allowed the destruction of some of those records of Creation which we had it in our power to preserve; and while professing to regard every living thing as the direct handiwork and best evidence of a Creator, yet, with a strange inconsistency, seeing many of them perish irrecoverably from the face of the earth, uncared for and unknown.

Allow me to share a bit more about Wallace, Darwin, and who got the credit for the theory of evolution, as it’s a story that should be more widely known, but isn’t, as well as mention some details about other admirers of Wallace’s book. Over to The Guardian again:

In 1858, in Halmahera, Wallace wrote his essay on natural selection and posted it to Darwin. Darwin and his friends, the botanist Joseph Hooker and Charles Lyell, were horrified. Darwin had been working on a similar theory for several years and now faced the prospect of being robbed of glory. Lyell and Hooker arranged a reading for Wallace’s paper and for a hastily written one by Darwin at the same meeting of the Linnean Society.

“It was a rather shabby trick,” said Bailey. “Wallace had sent his paper to Darwin to help get it published. Unluckily for him, he sent it to the one person in the world who had a vested interest in not seeing in print. Lyell and Hooker intervened and a reading was arranged instead.

“Darwin’s paper was read first and he is the one we now remember as the man who came up with the idea of natural selection. Wallace should have got priority, but it was Darwin, the man with the connections, who got the glory.”

In fact, Wallace did fairly well when he came back to Britain and he produced an extremely popular book, The Malay Archipelago, which provides a vivid, highly readable account of his travels in the East Indies. At one point he admits to sleeping comfortably one night “with half-a-dozen smoke-dried human skulls suspended over my head”. Joseph Conrad kept a copy of the book on his bedside table and drew on it for his own works, including Lord Jim. More recently, David Attenborough has admitted reading the book as a schoolboy and credits it with stimulating his interest in the natural world.

Back to the matter at hand: the discovery of these previously unknown songbirds. As Science News tells the story:

…Most of the birds in the study were found on Taliabu, the largest and highest of the islands.

Based on the birds’ physical features, DNA and variations in their songs, the researchers identified the five new species and five new subspecies. Some were visually striking, such as the fiery red-orange male Taliabu Myzomela honeyeater (Myzomela wahe) and the yellow-bellied Togian jungle-flycatcher (Cyornis omissus omississimus) with a cap of iridescent blue feathers on its head.

This is an amazing discovery, and it brought a smile to my face in a month when much of the nature news has been so deeply depressing. Alas, even this songbird news isn’t all positive; these “new” birds are subject to the same stresses that have wiped out other species. As Science News reports:

Many of the newly described bird species and subspecies are threatened by habitat loss driven by logging and increasingly frequent and severe forest fires (SN: 10/13/11). Of particular concern is the Taliabu grasshopper-warbler, which has been squeezed into tiny vestiges of highland habitat. The species “might not survive beyond a few decades,” Rheindt says.

But conserving species requires first knowing what’s out there, so studies like these are important, he says. “Time is limited, and biodiversity is going down the drain.”

The lack of appreciation of the need for conservation is something Wallace well recognised. Plus ça change…