Yves here. This post describes how much of the economics discipline has settled on a neat, plausible, and wrong explanation of secular stagnation. The only good news is at least pretty much no one buys Larry Summers’ theory.

The spectre of stagnation

A spectre is haunting the U.S. economy — the threat of stagnation. The anaemic recovery of the American economy after the Global Financial Crisis of 2008-09 looked uncomfortably similar to what Alvin E. Hansen (1939, p. 4) in the late stage of the Great Depression had called “sick recoveries which die in their infancy and depressions [….] feed on themselves and leave a hard and seemingly immovable core of unemployment.”

Not surprisingly, therefore, interest is once again growing in Hansen’s ‘secular stagnation’ thesis which stated that an economy could experience persistent stagnation as a result of a structural shortage of aggregate demand. As is all too well known, Lawrence Summers (2013, 2015) played a big role in reviving Hansen’s original idea, but he did this with a distinctly pre-Keynesian twist. In Summers’ analysis, an ageing population, heightened income inequality and a large inflow of foreign finance, by raising savings, created a structural excess supply in the market for loanable funds; this ‘savings glut’, so the argument goes, pushed down the interest rate to its zero-lower bound. However, because, according to Summers, even a zero interest rate failed to remove the savings excess, the macro outcome has been a structural demand deficiency — and stagnation.

Summers’ ‘zero-lower-bound explanation’ of the demand shortage and stagnation splendidly failed to persuade the profession. Neither did it convince policy-makers. One reason is that modelling the financial system as a loanable funds market operating in a ‘corn economy’ is, as argued by Bofinger 2020, empirically misleading and practically dangerous: monetary economies and modern financial systems, as Keynes realized already in the 1930s, work differently — lending by money-creating commercial banks is not constrained by available savings (deposits) and business investment is overwhelmingly driven by (expected) demand (see Cynamon and Fazzari 2017; Kopp et al. 2019) rather than by changes in the interest rate; I have argued this before (Storm 2017 and Storm 2019), writing in the spirit of Samuel Beckett’s famous lines (from the 1983 story Worstward Ho): “Ever tried. Ever failed. No matter. Try again. Fail again. Fail better.”

But there is a second reason why Summers’ zero-lower-bound explanation of the demand shortage and stagnation failed to make the cut: evidence suggests that the U.S. is not suffering from a shortage of demand: the growth rate of actual output during most of the 2000s has been staying close to potential output growth and even has exceededpotential output growth since 2010.

This is shown in Figure 1, which presents the growth rates of actual and potential output of the U.S. economy during the period 1960-2018. The figure shows a rather steady decline in potential growth — from more than 3% per year in the 1960s and 1970s to less than 2% per year during 2007-2018. Actual growth can be seen to fluctuate around potential growth, and to follow the downward trend. Indeed, virtually all empirical studies of both actual and potential growth of the U.S. show a remarkable slowdown, which started well before the Great Financial Crisis of 2008-09 (Fernald 2014; Storm 2017; Kiefer et al. 2019; Fontanari et al. 2019). Most observers conclude that it must have been declining potential growth which forced down the rate of actual (demand-determined) growth, because they have learned to believe that while demand does affect actualgrowth, it does not and cannot influence potential growth – the latter is said to be completely determined by ‘demography’ (labor force growth) and ‘technology’ (productivity growth).

Hence, in its modern incarnation, secular stagnation is not so much a matter of a deficiency of demand (as was Hansen’s view), but a symptom of deep structural problems on the supply side of the economy (Fernald 2014; Furman 2015; Gordon 2015). An ageing labor force and demographic stagnation constitute a first supply-side problem. But the real problem is the alarming steady decline in total-factor-productivity (TFP) growth, the main component of potential output growth. Diminishing TFP growth is taken to reflect a deep-rooted technological torpor, which lowers the returns on investment and hence pushes desired investment spending down too far. This, in turn, is argued to have lowered the growth rates of both potential and actual GDP. Thus, the conclusion must be that the U.S. is ‘riding on a slow-moving turtle’, and ‘there is little politicians can do about it’, as Robert Gordon (2015, p. 191) expressed it.

In the accompanying paper and using standard growth-accounting schemes, I present empirical evidence on the secular decline in aggregate TFP growth for the U.S. economy (1948-2015) and on the main components or drivers of this decline. I find that the secular decline in TFP growth in the U.S. is driven almost completely by the long-term slowdown of labor productivity growth and/or the secular decline in real wage growth. In the supply-side narrative, fading labor productivity is supposed to have forced down real wage growth. This ‘decided opinion’ is illustrated in Figure 2: the technological torpor captured by the exogenous decline in TFP growth leads to lower labor productivity growth, which in turn forces down real wage growth. That is, in line with the marginal productivity theory of income distribution, neoclassical supply-side ‘intuition’ holds that real wage growth ‘follows’ exogenous productivity growth, because profit-maximizing firms will hire workers up until the point at which the marginal productivity of the final worker hired is equal to the real wage rate. However, as John Stuart Mill observed long ago, “the fatal tendency of mankind to leave off thinking about a thing when it is no longer doubtful, is the cause of half their errors” and Mill appositely warned about the “deep slumber of a decided opinion”.

The ‘supply-side intuition’ does not allow for any influence of demand factors on the secular decline in productivity growth and squarely blames the decline in potential growth on the slowdown of exogenous technological progress. However, the problem with this simple ‘intuition’ is that it is wrong. There are sound theoretical reasons, and there is robust empirical evidence, to blame (a substantial part of) the long-run decline in productivity growth on stalling demand growth (Storm 2017; Girardi et al. 2018; Fontanari et al. 2019). This goes against the deep-rooted theoretical belief system which maintains that long-run trend growth is determined by ‘technology’ and ‘demography’ and can be separated from short-run fluctuations of actual demand-determined growth around this trend. Generations of macro-economists have been educated to believe that ‘Keynes’ holds only for the short run, whereas the inexorable supply-side factors ‘demography’ and ‘technology’ govern the long-run. Generations of policymakers have been wont to using notions of ‘potential output’ and ‘output gaps’ to anchor macro-economic, and especially monetary, policy — notions which are derived from exactly this belief that demand does not matter in the long run ( Cynamon and Fazzari 2017; Girardi et al. 2018; Fontanari et al. 2019).

Demand matters in the long run, because business investment is overwhelmingly influenced by not by interest rates, but by ‘accelerator effects’ operating through aggregate demand (Kopp et al. 2019). Business investment, in turn, is the key determinant of labor productivity growth, innovation and technical progress. Accordingly, a structural decline in demand growth does depress labor productivity growth — through dithering business investment and a decline in capital deepening (Storm and Naastepad 2012). As a result, the growth rate of potential output must be low — this causal chain is illustrated in Figure 3. Crucially, once demand deficiency has lowered potential output growth, this means a low “speed limit” for actual growth, as inflation-adverse monetary policymakers, convinced that low TFP growth is due to a technological malaise, will keep actual growth close to sluggish potential growth — as happened in the U.S. (see Figure 1). In Figure 3, this feedback effect is illustrated by the dashed arrow from ‘potential output growth’ to a ‘structural shortage of aggregate demand’: because the ‘observed’ output gap is small (which makes the risk of inflation look large), monetary policy authorities will step on the brakes and raise interest rates in response to a revival of actual growth — nipping the recovery in the bud and creating a ‘sick recovery’ which ‘dies in its infancy’. Stagnation, while being avoidable because potential growth can be raised by higher investment and demand, becomes a self-fulfilling process (Storm 2017 ; Storm 2019; Fontanari et al. 2019). 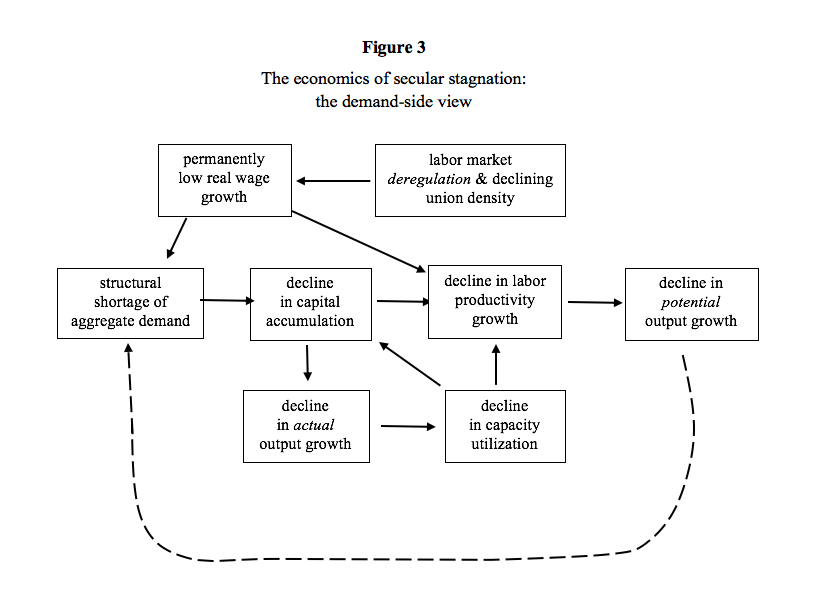 In addition to all this, productivity growth will slow down when real wage growth declines. The key mechanism is this: rising real wages provide an incentive for firms to invest in labor-saving machinery and productivity growth surges as a result; but when wage growth is low, businesses have little incentive to invest in the modernization of their capital stock and productivity growth falters (Foley and Michl 1999; Basu 2010; Storm and Naastepad 2012). This is illustrated in Figure 3 by the arrow from ‘permanently low real wage growth’ to ‘decline in labor productivity growth’. In the U.S., the secular decline in real wage growth is strongly associated with the post-1980 reorientation in macroeconomic policy, away from full employment and towards low and stable inflation, which paved the way for labor market deregulation, a scaling down of social protection, a lowering of the reservation wage of workers, and a general weakening of the wage bargaining power of unions (Storm and Naastepad 2012). The recent rise in persons ‘working in alternative work arrangements’ or the ‘gig economy’ is merely the culmination of this earlier trend.

No single chart or empirical test can “prove” the case that secular stagnation is due to demand deficiency. Rather the case rests on a historical analysis of multiple pieces of evidence, which (as I argue for the U.S.) all point in the same direction: the slowdown in productivity growth reflects a demand (management) crisis, with the ‘under-consumption’ driven by stagnating real wages, rising inequality and greater job insecurity and polarization. Demand is leading supply, in the short as well as in the long run. The important dynamic macro channels through which demand growth influences productivity growth and hence potential output growth, all listed in Figure 3, deserve more attention in research.

Recognizing the importance of demand growth to long-run growth has profound and upsetting consequences for macro policy-making. Indeed, the all-too-neat separation between a ‘Keynesian’ short run and ‘supply-determined’ potential growth in the long run breaks down — and so do standard notions and measurements of ‘potential’ output growth and ‘output gaps’ (Fontanari et al. 2019). What must be recognized is that structurally weak demand growth forces down potential growth, whereas faster demand growth, supported by more expansionary, full-employment oriented fiscal and monetary policies, raises productivity growth and potential output. Conventional (supply-side) measures of potential output which ignore the dynamic demand-side channels, systematically overemphasize the ‘inflation barrier’ and methodically underestimate the margins for expansion of actual output (Fontanari et al. 2019) and thereby legitimate a structural deflationary bias in macro policy (Storm and Naastepad 2012; Girardi et al. 2018; Storm 2017; Storm 2019). What is not recognized, at great cost to society, is that higher demand may gradually remove the scarcities and bottlenecks which in the short run might create inflation pressures.

Stagnation is a sad instance of iatrogenesis: a pathology caused by the exact economist experts whose task it is to improve the economy’s health. To fail better, we must try again and discard ‘decided opinion’ that secular stagnation is an exclusively supply-side phenomenon and recognize that demand drives growth ‘all the way’ (see also Taylor et al. 2019). Without new economic thinking, macro policy will retain its deflationary biases and secular stagnation remains the ‘normal’.