Yves here. This study supports our hypothesis that CalPERS’ Marcie Frost, who has managed to greatly increase her compensation since she joined the public pension fund, is overpaid. In general, in public pension funds, CEOs engage in administrative oversight and politicking, neither of which have much impact on performance.

I wonder if these findings can also be generalized to US not-for-profit hospital systems, which have been invaded, locust-like, by MBAs who seem much better at personal rent extraction than service delivery.

Studies have shown that in the private sector, top managers and CEOs can make a difference in the performance of their organisations and have a ‘style’ that is portable across firms. This column uses the setting of hospitals in the English National Health Service to examine whether CEOs can make a difference in large and complex public sector organisations. The findings suggest that the CEOs of large public hospitals do not have a significant impact on performance, casting doubt on the ‘turnaround CEO’ approach to management in the public sector.

Governments seeking to improve productivity in public services frequently turn to the private market for inspiration. A popular reform model is to give CEOs greater autonomy to run their organisations, accompanied by manager-specific compensation policies, performance-related pay, tighter monitoring, and dismissals (Besley and Ghatak 2003, Le Grand 2003). Such policies have been advocated internationally by organisations such as the World Bank and the OECD and have been implemented in countries across the globe.

These ideas build on findings that in the private sector, top managers and CEOs can make a difference in the performance of their organisations, and that CEOs have a ‘style’ that is portable across firms (Bertrand and Schoar 2003). Devolving decision making to the top managers of small organisations that provide public services – such as schools and development projects, or public-service organisations with simple tasks – has been shown to improve outcomes for service recipients (Bohlmark et al. 2016, Bloom et al. 2016, Fenizia 2019). But the effect of top managers on large and complex public sector organisations has hardly been examined. Can CEOs make a difference in this context?

To answer this question, we examined the impact made by the CEOs of large and complex organisations operating in the public sector – specifically, in public hospitals in the English National Health Service (NHS) (Janke et al. 2019). The NHS is the fifth largest employer in the world, with approximately 1.2 million employees. NHS hospitals maintain an average of 4,500 employees, multi-million turnovers, and labour costs accounting for around 70% of the costs of production. NHS CEOs are well paid compared to other top managers in UK public service organisations. As we show in Figure 1, they are also well paid relative to NHS doctors and nurses, a fact that has led to press headlines decrying the pay of ‘fat cat’ bureaucrats in the NHS. 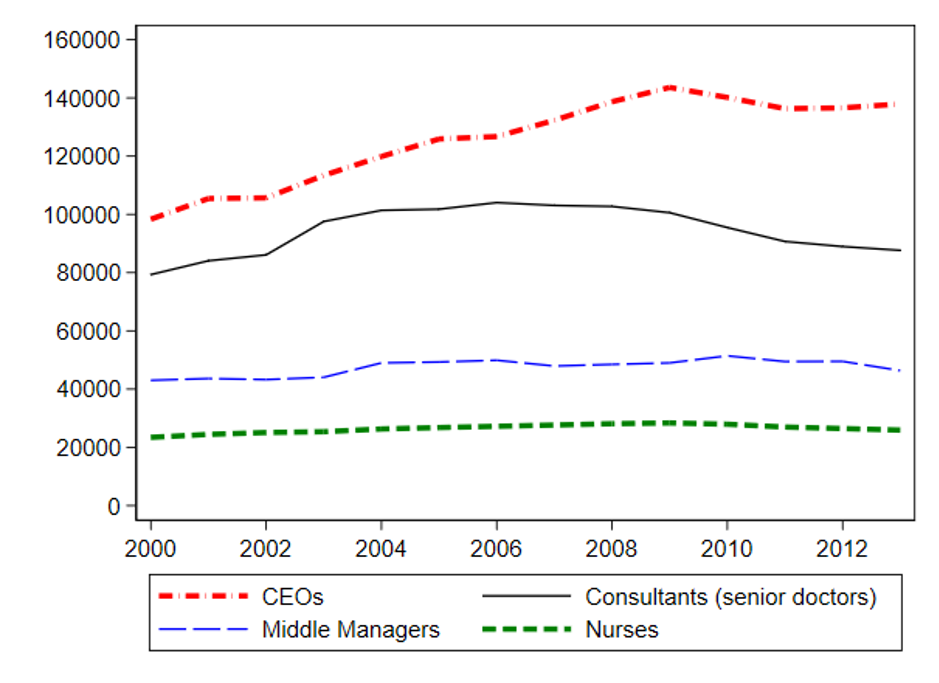 NHS hospitals provide an ideal setting in which to examine whether managers have a style that can be taken across organisations to bring about change, creating policies that give greater autonomy to managers who effectively improve productivity. In the late 1980s, the English government embarked on a large reform programme that replaced an administrative approach to hospital management with a highly decentralised model in which CEOs were given responsibility for the management and performance of individual public hospitals, and hospital boards could select and reward individual CEOs autonomously. Meanwhile, frequent moves by the same CEOs across different but comparable NHS hospitals make it possible to separate the role of manager-specific discretion for hospital performance from other persistent differences in hospital characteristics. Finally, government-published data on NHS hospitals cover inputs, throughputs, and outputs – both financial and clinical – and require hospitals to publish the pay awarded to their top managers. This allows us to complement the analysis of CEO performance with an examination of their compensation, and compare perceived differences in managerial ability (as proxied by their compensation) to actual differences (from our analysis of objective production measures).

We find considerable and persistent differences in CEO pay across NHS hospitals. These differences persist as CEOs move between hospitals and suggest that the independent NHS hospital boards, which hire CEOs and set their remuneration, perceive some to be better than others. Does this perception reflect actual differences in performance?

We find the answer is basically ‘no’: there is little consistent evidence that CEOs generate persistent performance effects across the organisations they lead. Put another way, we find that a CEO who has improved financial performance, decreased waiting lists, or improved clinical performance in one hospital cannot simply replicate this effect in the next.

We examine a number of possible reasons for this apparent lack of CEO effects in hospital production, which stands in contrast with the substantial and persistent differences in pay. First, we examine whether the lack of persistence across hospitals in production is driven by the assignment of good CEOs to poorly performing hospitals, or hospitals that have structural features that negatively affect the possibility of achieving good results. If this were the case, differences in pay across CEOs would not necessarily be mirrored by differences in hospital performance, since the best CEOs would be assigned to harder-to-change organisations. Second, we examine whether the lack of persistent CEO effects could be driven by the fact that mobile CEOs in the NHS tend to have short tenures (the average CEO is in one post for less than four years). In this case, CEOs might in fact differ in terms of their potential effect on hospital performance, but the effects could fail to materialise over short time horizons. Finally, we examine whether evidence exists of CEO-hospital match effects – i.e. whether specific types of CEOs perform better in specific types of hospitals, which would imply that CEOs matter, but only when there is a good fit between manager and hospital.

We find little evidence of endogenous assignment: a good performance is not followed by a bad one because the CEO moved to a difficult-to-manage hospital. But we do find some evidence of tenure effects: those CEOs who stay for a longer-than-average tenure seem to have more success generating change. This finding – combined with the evidence of substantial and persistent pay differentials – suggests that employers may overestimate the ability of CEOs to effect change over short periods. We do find some evidence that certain types of CEOs perform better in certain types of hospitals: those who are medically trained deliver higher clinical quality when running teaching hospitals, whilst those with a private sector background turn in a stronger financial performance when placed in hospitals which face more competition. But these effects do not persist when the CEOs move to another type of hospital, again suggesting that employers may overestimate the ability of CEOs to bring about change regardless of the circumstances they face.

Overall, we find that the CEOs of large public hospitals do not necessarily impact hospital performance, a result that contrasts sharply with earlier findings relating to the private sector and to smaller public sector organisations. Various structural factors may account for this lack of effect, including the public sector nature of the NHS, which may have inclined the effort of NHS CEOs towards the pursuit of political targets rather than performance-enhancing policies. The lack of a CEO effect may also be due, more broadly, to the complexity of hospital production, which transcends the fact that the NHS is publicly owned. From either perspective, our results cast doubt on the effectiveness of a ‘turnaround CEO’ approach – the model in which top managers frequently rotate across hospitals in pursuit of performance improvements – for large and complex public sector organisations.