The Wall Street Journal has a sobering new article on a phenomenon that heretofore had gone largely under the radar: the elderly, or per US-speak, seniors, isolated in their premises and either too feeble and/or too cognitively impaired to take care of themselves. They are casualties of the progress of the market economy, which as Karl Polanyi described long form in his seminal work The Great Transformation, undermined social structures by commodifying labor, as in people, and nature. Although there were always individuals who still wound up in desperate circumstances and might wind up the mad person in rags begging in the town square, old people tended to be cared for by family members, often helping with child care and household tasks until they became infirm. Churches also would provide support for the poor and old who’d wound up on their own.

My uncle Dick was a borderline example of this phenomenon. He’d never made much money, and his wife divorced him after he became a lobsterman. His lawyer managed to present his gross income as if it were his net, leading to punitive alimony and child support relative to his earnings. He was also subject to severe depression, sometimes staying in bed 22 hours a day and finding it too taxing to see people (don’t even ask how many medications he tried; he was so desperate he even sought out electroshock). This was a genuine shame because he was one of the nicest people you would ever meet; he was the sort who would give the shirt off his back to someone in need.

Dick quit lobstering due to damage to his knees and diabetes ruining his balance. He lived below the poverty line in a house he inherited. The child that lived nearest was an hour away, so she could not do much. He got by due to having a close friend, Russ, who would make sure he had provisions, take him to the VA hospital as needed for checkups and care, and visit him often. He also had some people who knew him who’d drop by off and on. And he did odd jobs he could do at home to generate a little cash, like repair lobster traps and pick out crabs, so that also kept him in contact with people and gave him some structure. He also took up knitting; I have a scarf and headcap he made. But if you visited him, you’d see how difficult his situation was. His bed was in the living room, and his main activity was using the computer which was on the desk a short distance away.

When his friend Russ unexpectedly dropped dead, Dick went to a VA nursing home in a part of Maine well away from where he had lived. His daughter would sometimes take him out but he could stay away for only three nights; more and they’d have to put him through the intake process again. He clearly didn’t like being there; he didn’t get on with his roommate and the other residents would eat any nice food he got or was sent and had to store in a shared refrigerator.

At least Dick had lived in a bona fide community, had a family member in the picture, and was well liked. Too many seniors don’t have close relatives nearby, or even if they do, they often can’t provide the level of support needed. And even though there are agencies and private services that can help (short of the costly solution of brining in home health care aides or going to a facility), many, by the time they need help, lack the energy and organization to investigate options, make choices, and get in their various systems.

From the Wall Street Journal. Note the chart; I guarantee financial exploitation is grossly under-captured, since the main perps aren’t fraudsters who target seniors, but family members and caregivers:

Rising numbers of older adults are unable to care for themselves, often leading to serious health problems and even death, according to state and local government agencies. 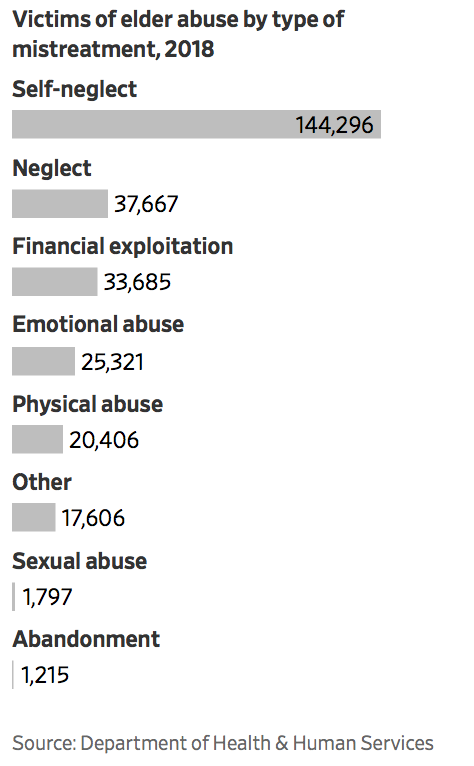 Seniors who no longer drive, for example, are often unable to get to medical appointments, exacerbating health problems that can render them incapable of caring for themselves. A fall can result in a hip fracture leaving one bedridden and unable to care for oneself. Failure to pay bills for the phone or other utilities could lead to service cutoffs. Forgetting to pay rent could lead to the loss of a home….

The reasons seniors stop caring for themselves vary, including illness, dementia, depression and poverty. The loss of the spouse or a neighbor who previously kept an eye on an individual often triggers a decline into self-neglect, experts say.

About one in four Americans age 65 and older, or 14.3 million, lived alone in 2017, according to government data, up 31% from 10.9 million people in 2007. Those age 60 and over spend more than 10 hours of their daily measured time by themselves, compared with less than five hours for people in their 40s and 50s, according to the Pew Research Center. Daily measured time refers to all waking hours except those spent on personal activities such as grooming…..

Experts say the key to reducing self-neglect cases is providing services to enable seniors to remain in their homes safely, such as reliable transportation for medical appointments and grocery shopping, as well as affordable home help with chores and regular monitoring.

But in a small number of cases in which individuals are determined unable to live alone, the agency petitions a court to place them in short-term guardianship.

Most seniors keenly want to stay in their homes rather than go into a facility, particularly since the ones that are non-institutional typically require large non-or-only partially refundable deposits ($500,000 is common) and have waiting lists. But managing caregivers takes some organization and firmness, and physically vulnerable people are often concerned about asserting themselves lest they get fired by the agency for being difficult (don’t kid yourself, I had an agency go into the “Maybe we aren’t for you” line when they seemed uninterested in their aides not performing basic required duties) or get assigned someone even worse.

Needless to say, some Wall Street Journal readers thought they had this all sorted out. For instance, from one David Hill:

Where are the adult children?

Why wasn’t a Durable Power of Attorney executed before the parents went into this downward spiral?

I set up a Revocable Trust years ago when I was in my early 30’s and executed the documents needed , Durable Power of Attorney, HIPPA and so on so that my two adult daughters can take over for me when and if I become mentally or physically unable to deal with life.

Copies of certain documents need to be given to physicians and others as needed.

Most of these can be obtained by, for example, the State of California.

For odd reasons parents refuse to deal with these issues. My ex-wife refuses to even disclose her assets to her children. Nixing these critical steps can wind up looking at the couple in this article.

Notice the assumptions? Money and children willing to and nearby enough to help. Legal agreements are only as good as the people involved in them. What if the kids are overwhelmed by illness, divorce, or a career crisis? What if the kids disagree about what to do? What if one of them decides to siphon money or property out…after all, they’ll presumably get some of it down the road anyhow.

And I love his naive faith in his documents. Hospitals reject medical powers of attorney all the time. I know a California lawyer who presented his father’s financial power of attorney to Wells Fargo, who said, “We agree that this is correct under California law, but we don’t care. We are sending our notary over and nothing happens until he signs our document.”

Lawyer replies, “He’s being loaded into the ambulance right now to go to a skilled nursing facility and I need access to his funds to pay the deposit.”

Wells didn’t care. (You might ask why the father was with Wells; his experience was that all the other banks were as bad and he didn’t want the hassle of moving accounts).

The father died quickly. The son got himself appointed executor with record speed. He marched into the branch and closed the checking account…a seven figure withdrawal.

Ed Johnson was more realistic by virtue of experience:

My first post began with: “Regrettably” because the cold, hard reality is that society will not devote the resources necessary for decent care.

My Mom had a room next to one occupied by the mother of the owner of a NFL team; sometimes I would answer her call button when I was visiting because the staff was so busy.

To provide decent care, CNA’s would have to be paid at least $40/hour + overtime + benefits and that would jack up costs to the point where only NFL owners and the like could afford the skilled care.

I was a one-man band and I did the best I could for my Mom, but I just could not handle the 24/7/365 care required by myself; she didn’t want me to try.

From my experience even the “best” facilities can be Dickensian at times.

For myself, the solution is to manage as best as I can as long as I can — eg today I plowed and fixed more fence.

When I can’t do that, then I’m going to check out rather than go to a facility.

Other people may prefer a facility; I respect that.

I wish there were better answers, but as I pointed out with my example from Italy, even things like public community centers for seniors would be a great help, but we don’t do that in individualistic/privatized America.