Yves here. Subprime auto loans provide more evidence that this supposedly solid “recovery” has cracks in its foundations. This is the sort of “Ponzi finance” behavior that Minsky accurately depicted as leading to eventual ruin.

Auto loan and lease balances have surged to a new record of $1.33 trillion. Delinquencies of auto loans to borrowers with prime credit rates hover near historic lows. But subprime loans (borrowers with a credit score below 620) are exploding at a breath-taking rate, and they’re driving up the overall delinquency rates to Financial Crisis levels. Yet, these are the good times, and there is no employment crisis where millions of people have lost their jobs.

All combined, prime and subprime auto-loan delinquencies that are 90 days or more past due – “serious” delinquencies – in the fourth quarter 2019, surged by 15.5% from a year ago to a breath-taking historic high of $66 billion, according to data from the New York Fed released today: 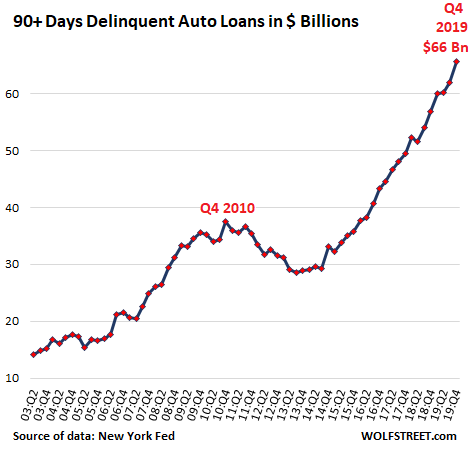 These delinquent loans hit the lenders’ balance sheet and income statement in stages. In the end, the combined loss for the lender is the amount of the loan balance plus expenses minus the amount obtained at auction. On new vehicles that were financed with a loan-to-value ratio of 120% or perhaps higher, losses can easily reach 40% or more of the loan balance. On a 10-year old vehicle, losses are much smaller.

As these delinquent loans make their way through the system and are written off and disappear from the balance sheet, lenders are making new loans to risky customers, and a portion of those loans will become delinquent in the future. This creates that flow of delinquent loans. But that flow has turned into a torrent.

Seriously delinquent auto loans jumped to 4.94% of the $1.33 trillion in total loans and leases outstanding, above where the delinquency rate had been in Q3 2010 as the auto industry was collapsing, with GM and Chrysler already in bankruptcy, and with the worst unemployment crisis since the Great Depression approaching its peak. But this time, there is no unemployment crisis; these are the good times: 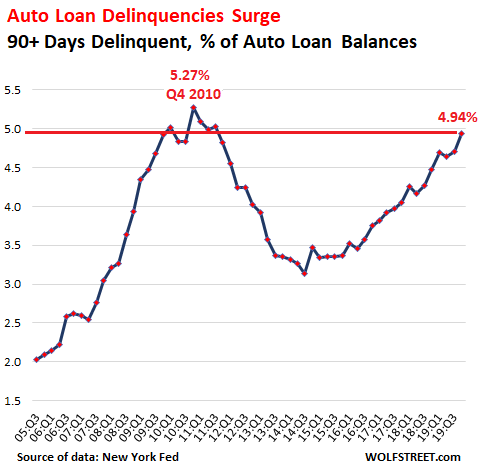 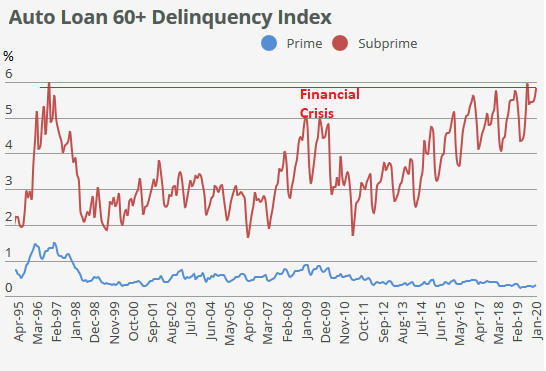 Why Are Subprime Delinquencies Surging?

It’s not the economy. That will come later when the employment cycle turns and people lose their jobs. And those delinquencies due to job losses will be on top of what we’re seeing now.

It’s how aggressive the subprime lending industry has gotten, and how they’ve been able to securitize these loans and selling the ABS into heavy demand from investors who have gotten beaten up by negative-interest-rate and low-interest-rate policies of central banks. These investors have been madly chasing yield. And their demand for subprime-auto-loan ABS has fueled the subprime lending business.

Subprime is a very profitable business because interest rates range from high to usurious, and customers with this credit rating know that they have few options and don’t negotiate. Often, they might not do the math of what they can realistically afford to pay every month; and why should they if the dealer puts them in a vehicle, and all they have to do is sign the dotted line?

So profit margins for dealers, lenders, and Wall Street are lusciously and enticingly fat.

Subprime lending is a legitimate business. In the corporate world, the equivalent is high-yield bonds (junk bonds) and leveraged loans. Netflix and Tesla belong in that category. The captive lenders, such as Ford Motor Credit, GM Financial, Toyota Financial Services, etc., or credit unions, take some risks with subprime rated customers but generally don’t go overboard.

The most aggressive in this sector are lenders that specialize in subprime lending. These lenders include Santander Consumer USA, Credit Acceptance Corporation, and many smaller private-equity backed subprime lenders specializing in auto loans. Some sell vehicles, originate the loans, and either sell the loans to banks or securitize the loans into ABS.

And they eat some of the losses as they retain some of the lower-rated tranches of the ABS. Some banks are exposed to these smaller lenders via their credit lines. The remaining losses are spread around the world via securitizations. This isn’t going to take down the banking system though a few smaller specialized lenders have already collapsed.

But demand for subprime auto loan ABS remains high. And as long as there is demand from investors for the ABS, there will be supply, and losses will continue to get scattered around until a decline in investor demand imposes some discipline.