Yves here. While most people respond better to positive messaging, I find “degrowth” to be far too sanitized a term for the sort of consumption cutbacks we all have to make to have any hope of averting the worst climate and species loss outcomes. A big problem is most of us depend economically on infrastructure that is high cost in environmental terms (imagine, for instance, doctors, lawyers, and other professionals who serve individuals and small businesses located in suburbs of major cities). Even under current arrangements, radical conservation is our best first step, but how we get to a different economic order without a lot of energy expenditures is not obvious.

By Zack Walsh, a Research Associate at the Institute for Advanced Sustainability Studies (IASS) in Potsdam, Germany. He co-leads the A Mindset for the Anthropocene (AMA) project which integrates personal and socio-ecological transformations to sustainability. Originally published at openDemocracy 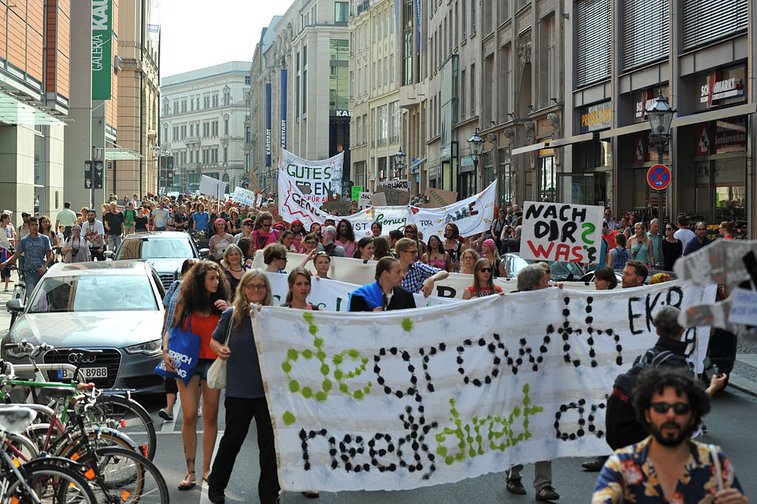 Demonstration at the end of the 4th International Conference on Degrowth, Leipzig, 2014. Wikimedia/danyonited. CC BY-SA 3.0 DE

When mainstream approaches to sustainability fail to challenge economic growth they provide limited, sometimes even false solutions to today’s crises. Technological and political interventions that reduce environmental impacts and enhance overall efficiency – though contributing to sustainability in a narrow sense – end up adding to global inequality and ecological overshoot, insofar as they accelerate growth. Growth is one of the chief drivers of social inequality and environmental degradation; it is also what sustains the global capitalist economy.

Sustainability solutions that promote growth under the banner of “green growth” are the easiest to accept and implement, but they are the least able to address the roots of today’s crises. Proponents of green growth believe that growth can be decoupled from environmental impacts, yet there is no empirical evidence that this is possible. Meanwhile, acting on such an unproven assumption obscures the real harm being done by sustaining extractive and exploitative capitalism.

We have already surpassed the known limits to growth, so degrowth is our only option. Sustainability is an outcome of healthy metabolic relationships between an organism and its environment. When consumption depletes resources faster than their rate of regeneration – which is what we are currently doing – it is by definition unsustainable.

Although essential, today’s most progressive reforms, including the Green New Deal and the circular economy, will only be effective when combined with a more equitable distribution of resources and decreasing per capita consumption in advanced economies. For sustainability efforts to be effective, they must be part of a comprehensive degrowth agenda focused on systems change.

Contrary to common misunderstandings, degrowth does not mean negative growth or imply sacrifices to one’s quality of life. Rather, it is focused on reducing a society’s material and energy throughput while actually enhancing quality of life.

According to the Paris Climate Agreement, societies around the world must become carbon-neutral within the next 30 years to limit global warming below 2°C. The only time carbon emissions declined as rapidly as needed was during global crises like World War II and the collapse of communism. The scale and pace of such changes implies a massive transition to degrowth which is impossible without coordinated action.

The next 30 years constitute what systems theorists call a ‘decision window.’ How societies decide to respond to mounting social and ecological pressures will determine whether the system evolves or collapses. Once the decision window ends and the global system passes the chaos point, the system irreversibly changes, and there are only two futures left – breakthrough or breakdown.

There is no chance that a wildly optimistic techno-future can sustain growth beyond social and planetary boundaries. Civilization will either collapse or it will follow a path of managed descent and sustainable reorganization. The only breakthroughs remaining follow paths of degrowth.

Although degrowth is beginning to enter mainstream debate, especially in Europe, it has very little influence over public policy. Few politicians are willing to challenge the growth imperative that sustains the global capitalist system. This contradiction lies at the heart of our inability to respond to global warming.

Climate negotiations have been ineffective in the face of competing economic and political pressures to grow. Given our inadequate response, scientists predict there is only a 5% chance of limiting warming below 2°C, and a 1% chance of limiting it below 1.5°C by 2100. Even if every nation succeeded in meeting their commitments to the Paris Agreement, we would still experience 3°C of warming.

Living in a world that is 3°C warmer is what we can expect by 2100, and that is a horrifying prospect. Life will be extremely challenging. In such a world, the UK government predicts that we will experience the collapse of part or all of the Amazonian rainforest, a 25-60% increase in the risk of hunger, and more than a billion people without sufficient water. The only way to protect our quality of life under such hostile conditions is through a deeply rooted collective transformation following principles of justice and sustainability.

Present-day responses to eco-crisis are split between two visions that represent the different futures of breakthrough versus breakdown. These two visions, called the Great Transition and the Great Unraveling, are typically considered future scenarios, but one does not have to look far to find indications that both are happening already. “The future is already here – It’s just not very evenly distributed,” as William Gibson once said.

Indigenous people, for example, have already experienced the apocalypse and indigenous knowledge has been warning us about climate change for centuries. As the image below shows – with the causes of eco-injustice in the center and their antidotes around the edge – the roots of today’s global crises are not new. Capitalism, colonialism, patriarchy, white supremacy, state violence, and Enlightenment humanism (and its domination of non-humans) underlie our global crisis and the Great Unraveling of civilization.

Today’s troubling rise of eco-fascism, for example, coincides with a global rise in white supremacy, authoritarianism, and right-wing nationalism. “We are seeing the beginnings of the era of climate barbarism,” writes Naomi Klein. A growing number of “preppers” are building bunkers and stockpiling resources. The ultra-rich are buying $3 million apartments in underground missile silos to comfortably survive future catastrophes.

Such responses protect the power and privilege of people who benefit from the collapsing system. They offer no breakthrough paths for transitioning society towards greater justice and sustainability. People who accept the Great Unraveling as the only reality tend to embrace rugged individualism, tribalism and protectionism. They see a dying system and respond reactively under stress. On the other hand, people who respond proactively through solidarity, justice and collective action are laying the groundwork for the Great Transition.

Numerous community-led disaster responses and efforts to implement a Just Transition exemplify the ongoing transformation required to another way of life based on inter-connection and cooperation. Efforts that promote eco-socialism, decolonization, racial justice, gender justice, direct democracy and multi-species kinship can help to challenge, heal and transform the roots of eco-crisis.

Our collective survival depends on our ability to cooperate under social and environmental constraints. When disaster strikes, “It will be empathy, generosity, and courage that we need to survive. Kindness and fairness will be more valuable than any survival skill.” Humanity’s greatest achievement – and the reason we became Earth’s dominant species – is our remarkable capacity for cooperation. Language, technology, culture and institutions (like law and money) allow us to communicate, learn from one another, and coordinate our actions. As the eco-crisis deepens, our collective survival depends on social innovations that advance justice and sustainability across all dimensions.

We have entered a new climate regime which poses a threat to civilization. Whether we meet global goals to decarbonize society over the next 30 years will determine whether we sustain a life worth living. To enhance quality of life under degrowth scenarios requires a strong commitment to cooperation and justice. As this and other studies illustrate, that is absolutely possible: commons-based systems can sustain flourishing while reducing material throughputs by up to 80%.

The commons provides a foundation for degrowth and sustainability which may constitute the seed forms of a post-capitalist system. What we need are cultures of practice to translate such innovations across all domains – political, economic, spiritual, and artistic.

These ideas are based on a new online course on EcoJustice: Securing Our Future, a collaboration between the A Mindset for the Anthropocene Project at the IASS, Potsdam and the Courage of Care Coalition. If you would like to learn more, please register for our online course or join our upcoming webinar on February 20 between 5-6 pm (PST).