With growing evidence that the climate impacts of natural gas are comparable to coal, the European Commission is planning to study ways to reduce methane emissions across the life cycle of natural gas production and consumption, with potential implications for fracked gas producers in the U.S.

“Work has started on the methane emissions linked to the energy sector, including oil and gas production and transport, but also coal mines and we are planning on presenting the strategic plan still this year,” said an unnamed official working with European Union (EU) energy commissioner Kadri Simson, as reported by Euractiv.

The EU obtains natural gas from many sources, both in gas form via pipeline and as liquefied natural gas LNG. One area of this EU study will be methane emissions over the life cycle of LNG imports from US fracked natural gas.

The U.S.is awash in natural gas from fracked shale basins, which has caused prices to plummet — creating big losses for natural gas producers in America — and the nation has been rapidly ramping up exports of LNG to deal with this excess.

Despite the big price drops and glut of natural gas — both in the U.S. and globally — that cast doubt on the economic viability of U.S. LNG exports, the Trump administration just approved permits for four new LNG export facilities in Texas alone. U.S.Secretary of Energy Dan Brouillette commented on the new approvals, specifically mentioning the goal of exporting more U.S.LNG to Europe.

The Trump administration recognizes the importance and increasing role U.S.natural gas has in the global energy landscape,” said Secretary Brouillette. “The export capacity of these four projects alone is enough LNG to supply over half of Europe’s LNG import demand.”

Europe is currently a top destination for U.S.LNG exports, with Spain and France receiving the most out of European countries in 2019. 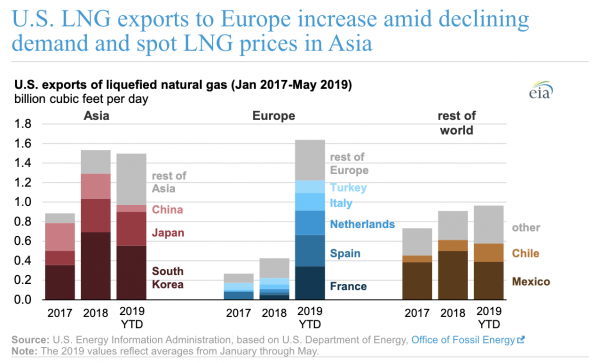 Bloomberg recently analyzed the climate impact of US LNG production production facilities and reported that “an analysis shows the plants’ potential carbon dioxide emissions rival those of coal.”

With the EU looking to quantify the full climate impact of US LNG, the biggest unanswered question is just how much methane is being vented and leaked during natural gas production, most of which involves fracking and horizontal drilling. What is known is that the level of gas flaring and venting has skyrocketed to the point that even oil company CEOs are admitting it’s a big problem.

Flaring in the Permian has soared to new highs. Pioneer's Scott Sheffield thinks it's a "black eye" for the basin. w/ @CrowleyKev https://t.co/4qZrAPRB9T

Measuring the impact of methane emissions from oil and gas production has been difficult historically because Environmental Protection Agency (EPA) numbers have been based on industry self-reporting, which a 2018 study found were underestimating emissions by 60 percent. Additionally, last year the Trump adminstration proposed a rule that would repeal regulations designed to reduce methane emissions in the oil and gas industry.

A recent analysis by energy consultants at Rystad Energy found that when natural gas processing plants, overwhelmed by huge volumes of gas, are taken into consideration in Texas’s prolific Permian Basin, the levels of flaring and venting were actually 30 percent higher than previously estimated.

Natural gas flaring in the Permian is much worse than previously estimated once processing plants are included in the data @RystadEnergy https://t.co/hGifSsJT7t

If the EU analysis includes all of these practices by the U.S. oil and gas industry, the results will likely conclude that U.S. LNG won’t help Europe’s plans to become the first climate-neutral continent by 2050.

A potential game-changing factor in this discussion is the use of satellites to gather more precise data on actual methane levels. More data from satellites equipped to make these measurements is expected to be available in the near future, but whether the EU

The recent satellite analysis of a 2018 fracked gas well blowout in Ohio is a perfect example. The well was owned by Exxon subsidiary XTO, which did not report the incident as a major methane leak, even though it spewed gas for 20 days before the company succeeded in plugging the well. As the New York Times reported, satellite data revealed the leak was one of the largest methane releases in U.S.history — underlining the unreliability of industry self-reporting of methane.

According to the New York Times, “Scientists also said the new findings reinforced the view that methane emissions from oil installations are far more widespread than previously thought.”

As Euractiv noted, methane emissions have been a “chronic blind spot” for European climate policy. And likewise in the U.S., it has been an area where the oil and gas industry and regulatory agencies have turned a blind eye.

Whether this latest EU analysis will help finally turn the world’s attention on this trans-Atlantic blind spot remains to be seen.