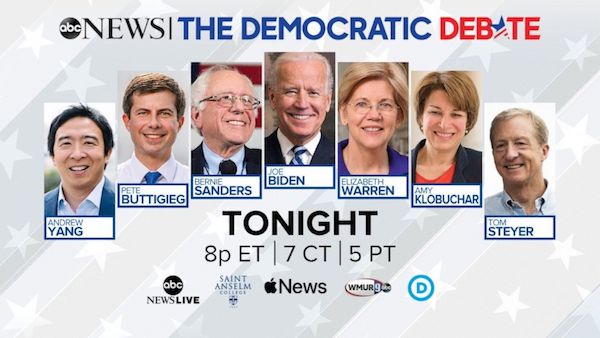 The debate will air live nationally on the ABC Television Network and locally on WMUR-TV.

WMUR-TV will also livestream the debate on www.WMUR.com and WMUR’s mobile app.

I’m sure readers will have their own suggestions.

I don’t think there’s any point trying to game the debate out (although the placement of Sanders next to Buttigieg, presumably decided before Iowa, is interesting). So I think I’ll take this space for some musings on two topics that I could not get to in Water Cooler. First, election reform; and second, party politics generally.

On election reform, I hate this debate format with the fire of a million suns. And after Iowa, it’s clear that the entire ballot “supply chain” of our electoral process needs to be blown away. So I thought I would hoist this comment of mine, slightly modified:

I like the idea of a campaign trail, because it tests the candidates’ stamina and ability. But we’ve had a year of this thing and we’ve only had their first vote?

4) Only print advertising (yeah, subsidy for local newspapers. And?)

5) No polls published in the last 30 days

Does that cover everything?

Now, this is very much a “you start coding and I’ll go find out what the requirements are”-style of thing; I didn’t from first principles, but from an attempt to eliminate all the niches in which power players and bad actors live and feed. So these ideas may not be thought through. How about the more worldly-wise among our readership try to figure out how the political class would game this?

I’ve also been meaning to get to this article, tossed over the transom by alert reader CC about political scientist Rachel Bitecofer’s theory of parties: “An Unsettling New Theory: There Is No Swing Voter.” An extract:

[T]oday her model tells her the Democrats are a near lock for the presidency in 2020, and are likely to gain House seats and have a decent shot at retaking the Senate. If she’s right, we are now in a post-economy, post-incumbency, post record-while-in-office era of politics.

Bitecofer’s theory, when you boil it down, is that modern American elections are rarely shaped by voters changing their minds, but rather by shifts in who decides to vote in the first place. To her critics, she’s an extreme apostle of the old saw that “turnout explains everything,” taking a long victory lap after getting lucky one time. She sees things slightly differently: That the last few elections show that American politics really has changed, and other experts have been slow to process what it means.

If she’s right, it wouldn’t just blow up the conventional wisdom; it would mean that much of the lucrative cottage industry of political experts—the consultants and pollsters and (ahem) the reporters—is superfluous, an army of bit players with little influence over the outcome. Actually, worse than superfluous: That whole industry of experts is generally wrong.

Bitecofer’s view of the electorate is driven, in part, by a new way to think about why Americans vote the way they do. She counts as an intellectual mentor Alan Abramowitz, a professor of political science at Emory University who popularized the concept of “negative partisanship,” the idea that voters are more motivated to defeat the other side than by any particular policy goals.

In a piece explaining his work in POLITICO Magazine, Abramowitz wrote: “Over the past few decades, American politics has become like a bitter sports rivalry, in which the parties hang together mainly out of sheer hatred of the other team, rather than a shared sense of purpose. Republicans might not love the president, but they absolutely loathe his Democratic adversaries. And it’s also true of Democrats, who might be consumed by their internal feuds over foreign policy and the proper role of government were it not for Trump.”

Bitecofer took this insight and mapped it across the country. As she sees it, it isn’t quite right to refer to a Democratic or Republican “base.” Rather, there are Democratic and Republican coalitions, the first made of people of color, college-educated whites and people in metropolitan areas; the second, mostly noncollege whites, with a smattering of religious-minded voters, financiers and people in business, largely in rural and exurban counties.

I’m not quite sure what to think about this. Intuitively, the “bitter sports rivalry” makes sense; I and many others have been complaining since at least 2003 about politics having been reduced to what jersey you wear. At the 30,000-foot level, it would seem that the best way forward for the country would be to outlaw political parties entirely — after Iowa, under RICO? — and figure out some other way to populate government offices, since parties have become wholly destructive to policy making. (One cannot, for example, using Bitecofer’s model as described here, give an account of the destruction of the Whigs, the rise of the Republicans, and the role of Abolitionists with a “party as sports team” model.) Since parties have as much justification to exist as a professional sports team does, but serve the wholly negative function of brain-damaging voters (see RussiaGate, or Birtherism — ironically started by the same political faction), why not take away their franchises? Somewhat closer to the ground, one notices that Bitecofer’s model doesn’t consider class, and so doesn’t consider the majority of the population who, not being able to purchase either tickets into the stadium or Pay-per-View, don’t root for any team. That majority is disproportionately drawn from the multiracial working class. The Sanders campaign only won the popular vote in Iowa because they focused on the “satellite caucuses” — the famous Ottumwa meatpackers — which were, too, disproportionately working class, because they, unlike the main caucuses, allowed people who couldn’t make the 7:00pm caucus to attend (no child-care, the night-shift, etc). One can only wonder why the Sanders campaign was the only campaign to focus on them. Perhaps their theory of change, which demands that the electorate be expanded from the working class? I don’t see how Bitecofer’s theory gives an account of how the electorate is to be expanded, how the Sanders campaign is trying to do that, or — perhaps most important to her — why the party establishments are so obviously unwilling to do so. Don’t they want more fans?

NOTE To be fair, Bitecofer seems to have been effective at predicting results with her model, and good for her.

As usual, this post does not update; readers may track the debate in real time in comments. Please keep your comments as informative and analytical as possible. There are no points at NC for context-free one-liners (“Boo ____!” or “Oh!”) that only those who are also watching can make sense of; that’s for Facebook or Reddit. I think it adds more value if you take a moment, use your critical thinking skills, then comment, and readers can discuss what you say. That way, those who cannot watch the debate — or can’t stand to do so — can get a good idea of what really happened by reading what you write. This is what the NC commentariat is so very good at, after all. Last time, the times before that, and this time. Thank you!