Governments of modern states need to convince men and women to fight and possibly to die for their country, putting aside their ‘selfish’ instinct to stay alive. This column examines whether welfare spending under Roosevelt’s New Deal boosted US patriotism during WWII. It finds that higher welfare spending prior to 1940 is positively correlated with greater patriotism, as measured by war bond purchases, volunteering for the US Army, and exceptionally brave acts in battle. The findings suggest that when the federal government looks out for its citizens’ needs, men and women who benefit repay the largesse by becoming more patriotic.

Without a Leviathan to defend him, the life of man is “nasty, brutish, and short”, as Thomas Hobbes argued. However, for each individual bearing arms, the decision to fight is tricky. The cost can be extreme – he runs the risk of death. The benefits are also large, but they accrue to the collective.

In small communities, the problem is typically solved by social norms (Costa and Kahn 2003). Evolutionary anthropologists have long argued that warfare co-evolved with a tendency towards altruistic parochialism – a willingness to undertake costly actions favouring the in-group (Choi and Bowles 2007).

Modern states with millions of citizens cannot use the same tools to encourage participation in war as hunter-gatherer communities and small societies did. This begs the question: how can governments convince men and women to fight and die for their country, putting aside their ‘selfish’ instinct to stay alive?

To solve the problem of action for the collective, one school of thought underlines the importance of creating ‘imagined communities’ (Anderson 2006). Shared myths, the emphasis of a common history, the enforcement of linguistic uniformity in school, and collective remembrance can all enhance a sense of shared identity (Colley 2009, Anderson 2006, Nora 1989).

An alternative interpretation points to the rise of modern welfare states as a motivating force (Alesina et al. 2017). Governments only got into the business of redistributing a significant share of GDP to the old, the sick, the invalid and the needy at the same time as mass armies rose to military prominence. By providing support in times of need, welfare states acquired a moral claim on the willingness to sacrifice of their citizens.

In a new paper, we examine whether welfare spending boosted patriotism for the US case during WWII (Caprettini and Voth 2018). Figure 1 illustrates our main finding. It shows how three measures of patriotism varied with welfare spending: higher New Deal support was associated with a greater frequency of patriotic acts, namely, war bond purchases, volunteering for the US Army, and exceptionally brave acts in battle (represented by medals awarded). 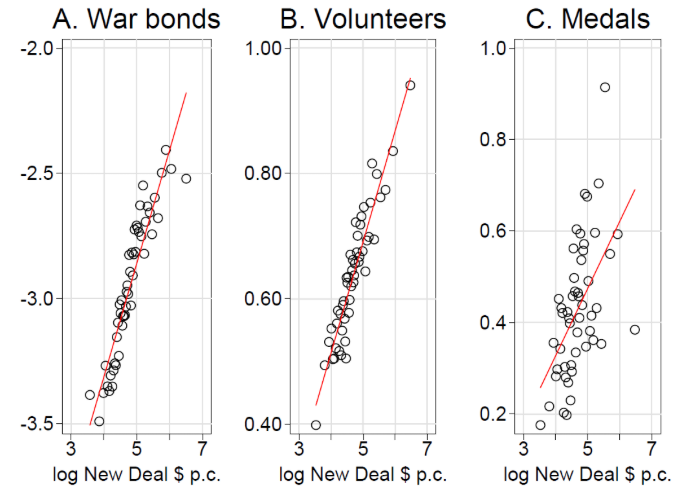 Notes: New Deal welfare spending prior to 1940 is positively correlated to greater patriotism as measured by purchases of war bonds (panel A), frequency of volunteering for the US Army (panel B), and heroism as measured by medals received (panel C).

Prior to 1933, the federal government rarely touched the lives of ordinary Americans, who did little more than occasionally use the post office. With the coming of Roosevelt’s ‘New Deal’, this changed dramatically. The federal government’s share of GDP more than doubled from 4% in 1933 to over 9% by the end of the 1930s (Folsom 2009). Social security for the elderly, unemployment insurance, public works programmes, loan support for distressed businesses and homeowners, help for farmers – there was hardly a corner of life that was not affected by New Deal spending (Figure 2d displays the geographical variation of welfare support). 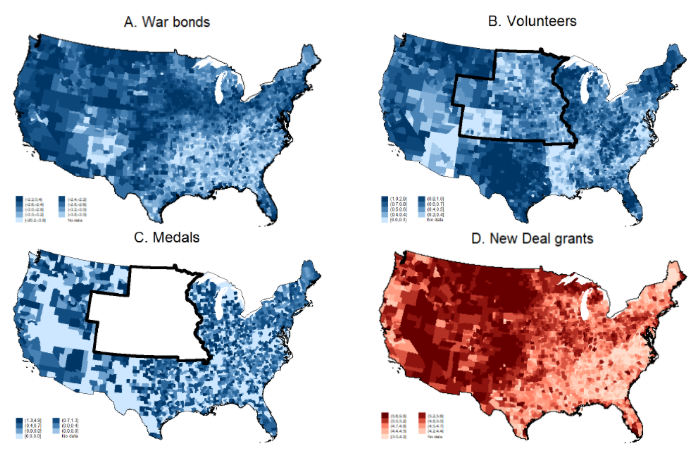 Notes: Panels illustrate the geographical distribution of (panel A) war bond purchases, (panel B) volunteers for the US Army, and (panel C) number of medals awarded (this measure for the states in the 7th Service Command could not be calculated due to poor coverage). Panel D shows the geographical distribution of New Deal grants. Darker colours represent higher numbers.

To measure patriotism, we look at three outcomes: war bond purchases, volunteering for the US Army, and exceptional acts of bravery in battle (represented by the number of medal recipients).

The US entered WWII when Japanese planes attacked and sank a good part of the Pacific Fleet in Pearl Harbor. Some 18 million men and women eventually served in the US armed forces; public spending accounted for 47% of GDP in 1943. A large share of this spending was funded by borrowing. In 1944, the government deficit amounted to 25% of GDP. Bond issuance was a key funding source.

War bonds were issued in a range of denominations and were, on average, costly propositions for the owner. The interest rate was low, not indexed to inflation, and paid only at maturity. Moreover, the bonds were not transferrable, and repayment was decades in the future.

Figure 2A illustrates the geographical distribution of war bond purchases. The US south saw fewer bond purchases, and the west and northwest look particularly patriotic in this dimension. Importantly, war bonds were more widely bought in areas that benefitted from New Deal spending in the preceding decade. As Figure 1A shows, counties that received high support saw a much more active uptake of war bonds than areas with limited welfare spending.

Volunteering for the US Army

While most Americans who served in the armed forces after 1941 were conscripts, some 3.4 million volunteers were inducted before this option was shut down at the end of 1942. Volunteers came from all over the country (Figure 2B), but to various extents. Figure 1B shows that in areas benefitting from more welfare spending after 1933, the frequency of volunteering was markedly greater.

Our final indicator comes from medals. We focus on two of the highest awards for valour: the Congressional Medal of Honor and the Distinguished Service Cross. Both were given out for outstanding acts of bravery involving physical courage in the face of the enemy; many were awarded posthumously.

In one example, Sergeant Sylvester Antolak was killed when single-handedly attacking (and destroying) a German machine-gun team in Italy in 1944; he received the Congressional Medal of Honor. Men like Sylvester Antolak came from all over the US, but with a great deal of variation in frequency at the county level (Figure 2C). Figure 1C shows how the likelihood of receiving a medal varied with the level of New Deal support prior to 1940: higher welfare spending spelled more heroism.

Is welfare support really driving patriotism, or is some hidden variable simultaneously affecting welfare support and patriotic actions? We show that the correlation between welfare and patriotism remains strong even after we account for a rich set of demographic and economic characteristics. Even within individual states, the counties that received more New Deal support showed more patriotism during WWII.

Correlation does not necessarily imply causation. To demonstrate the causal link between welfare and patriotism, we narrow the scope of our analysis. The New Deal paid a great deal of attention to the plight of farmers. In particular, the Agricultural Adjustment Act (AAA) paid farmers to take land out of production and compensated them for losses due to soil erosion. Some 12% of spending went to farmers, putting an average $386 into their pockets (in 1939, the median annual wage was $880).

Some of the agricultural support was allocated for reasons not reflecting economic conditions. In particular, a significant share of spending was driven by committee membership in the US Congress. In other words, districts who had a long-serving congressman typically received more AAA funds than other, similarly blighted (but less well-connected) districts. We can use the variation in AAA spending that is driven by ‘connections’ to explain patriotic behaviour. The effect is strong and goes in the same direction as the baseline correlation: more spending spelled more patriotism across rural America.

A New Geographical Pattern of Patriotism

Interestingly, the New Deal created a new geographical pattern of patriotism in the US. When we compile the same data for WWI – where information on volunteers and medal recipients is available – we find no correlation with 1930s spending. This also puts to rest any concerns that more federal help went to areas that were more patriotic to start with.

In his best-selling book Sapiens, Yuval Harari argues that the “real difference between us and chimpanzees is the mythical glue that binds together large numbers of individuals, families and groups. This glue has made us masters of creation.” If ‘mythical glue’ is important, we want to know where it comes from. Does it mainly derive from shared language, schoolroom indoctrination, and common narratives?

We argue that welfare spending can act as Harari’s mythical glue – when the US federal government began to look out for its citizens’ needs for the first time on a substantial scale, men and women who benefitted repaid the largesse by becoming more patriotic. Powerful propaganda argued that the New Deal’s main purpose was to look after America’s ‘forgotten men’.

When ordinary Americans had less reason to feel forgotten in times of need, they repaid Uncle Sam, in both cash and blood; areas that benefitted from New Deal programmes produced more volunteers, more soldiers who fought with outstanding courage and distinction, and they saw more war bond purchases.