Earlier this month, US Public Interest Group (US PIRG) published a short squib discussing one modest recent development in the battle over the right to repair, LOBBYING AGAINST RIGHT TO REPAIR IS RISKY. The post concerned Comp TIA, which certifies repair and IT technicians.

Alas, although Comp TIA  provides repair services, the organization found that when it lobbied in a manner that was consistent with its pro-repair orientation, its advocacy upset some of its customers.

Here I’m going to reproduce most of US Pirg’s post, as I think this is an important and reasonably optimistic development, which deserves wider attention. Advocates of the right to repair need to celebrate the small victories they can eke out, as  the forces arrayed on the opposing side are vast and powerful, despite the inherent popularity of right to repair perspectives.

Right to Repair laws, which make it easier for consumers to fix their own stuff, are broadly popular with the public. So when companies lobby against it, it can upset their customers. CompTIA, a leading provider of certifications for repair and IT technicians, found this out the hard way.

As Right to Repair aims to expand opportunities for repair technicians, you might expect that CompTIA would support the campaign. After all, 96 percent of hiring managers in the IT repair field use their A+ certificate as recruitment criteria. With this huge portion of the technicians CompTIA certified, they have built a very visible presence among repair technicians.

Instead, CompTIA was one of the leading groups advocating against Right to Repair reforms. In doing so, they opposed the idea that manufacturers should provide access to the parts and service information needed to repair modern gadgets, a policy that would help many of their members.

But earlier this month, CompTIA changed their tune.

Now, the reason for this shift was a change among the policy views of its membership, catalyzed by increased scrutiny of its lobbying practices arising from Right to Repair hearings:

Louis Rossmann, a repair shop owner and Right to Repair advocate, has built a significant YouTube following that includes many CompTIA members. His recent coverage of Right to Repair hearings increased scrutiny on the trade organization’s lobbying efforts, and holders of the A+ certification started speaking out. They took to Twitter with confusion and outrage, and were among the more than 3,000 individuals to sign Rossmann’s petition rebuking the trade group’s lobbying practices.

I must say I find it somewhat odd that an organization that seeks to provide repair and certification services would lobby to the contrary. so COMP TIA’s policy shift now seems to be a bit more aligned with the natural order of things. 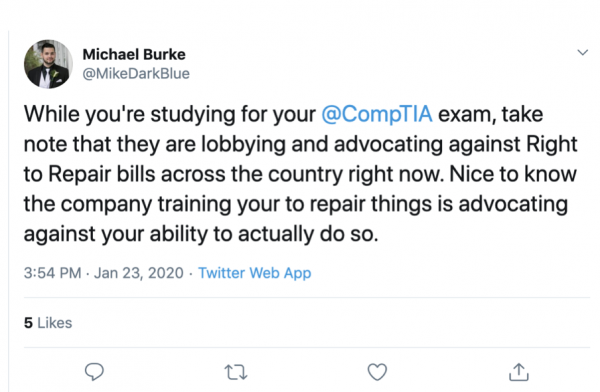 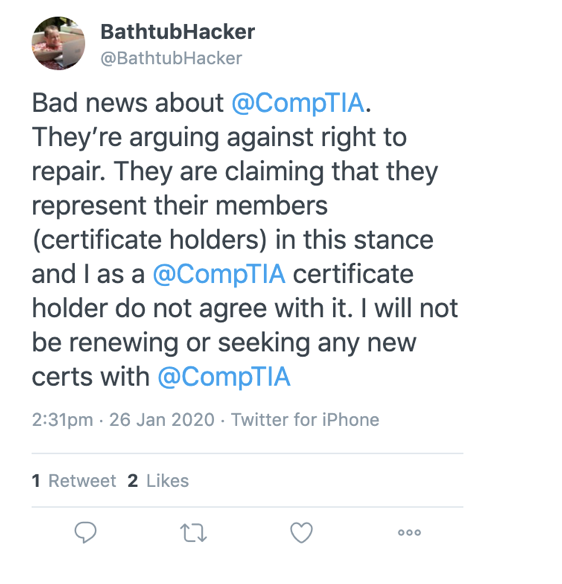 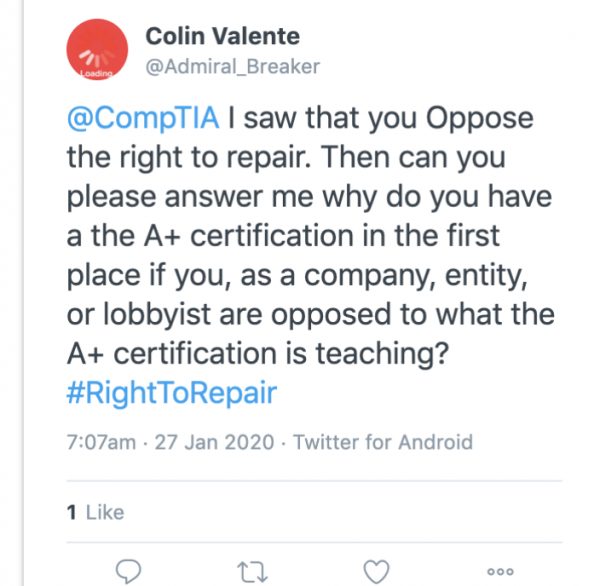 The reason CompTIA was simultaneously representing repair technicians and lobbying against Right to Repair is potentially linked to the 2014 acquisition of the lobbying firm TechAmerica. At that time, CompTIA was primarily focused on its education and certification business, but had little influence on public policy. They acquired TechAmerica to amplify the “industry’s already powerful voice in Washington, D.C.”

Apple, one of the leading voices opposed to Right to Repair reforms, is reported to be a client of that lobbying work, and has lobbied alongside CompTIA in states including California.

CompTIA bowing out of the Right to Repair conversation is the latest demonstration of the broad and deep support for these reforms. With Right to Repair legislation in Massachusetts and Hawaiialready clearing important hurdles, and the American Farm Bureau making the issue a legislative priority, the campaign has built significant momentum in the early days of 2020.

Getting in the way of that momentum, even when funded by a trillion dollar conglomerate, is risky, and industry is starting to buckle.

Another thing I want to mention: the right to repair and the US military. Readers may recall that last November, Captain Elle Ekman published a NYT op-ed that shocked even this cynical observer of US politics, Here’s One Reason the U.S. Military Can’t Fix Its Own Equipment:

As I posted shortly shortly thereafter, Lack of Right to Repair Limits Ability of US Military to Maintain its Own Equipment:

Apparently, even the US military doesn’t enjoy a right to repair for materiel it purchases, and instead must ship some equipment back to the states, for maintenance and repair by the original manufacturer, rather than fixing it locally.

Over to Captain Ekman’s op-ed:

A few years ago, I was standing in a South Korean field, knee deep in mud, incredulously asking one of my maintenance Marines to tell me again why he couldn’t fix a broken generator. We needed the generator to support training with the United States Army and South Korean military, and I was generally unaccustomed to hearing anyone in the Marine Corps give excuses for not effectively getting a job done. I was stunned when his frustrated reply was, “Because of the warranty, ma’am.”

At the time, I hadn’t heard of “right-to-repair” and didn’t know that a civilian concept could affect my job in the military. The idea behind right-to-repair is that you (or a third-party you choose) should be able to repair something you own, instead of being forced to rely on the company that originally sold it. This could involve not repairing something (like an iPhone) because doing so would void a warranty; repairs which require specialized tools, diagnostic equipment, data or schematics not reasonably available to consumers; or products that are deliberately designed to prevent an end user from fixing them.

I first heard about the term from a fellow Marine interested in problems with monopoly power and technology. A few past experiences then snapped into focus. Besides the broken generator in South Korea, I remembered working at a maintenance unit in Okinawa, Japan, watching as engines were packed up and shipped back to contractors in the United States for repairs because “that’s what the contract says.” The process took months.
…
I also recalled how Marines have the ability to manufacture parts using water-jets, lathes and milling machines (as well as newer 3-D printers), but that these tools often sit idle in maintenance bays alongside broken-down military equipment. Although parts from the manufacturer aren’t available to repair the equipment, we aren’t allowed to make the parts ourselves “due to specifications.”

The right to repair has become more prominent on the political agenda, with both Senators Sanders and Warren endorsing versions of the concept, as has the editorial board of the New York Times (see Right to Repair Initiatives Gain Support in US). The Federal Trade Commission debated the idea during a workshop this summer, and Ekman and captain Lucas Kunce submitted a comment letter, Comment Submitted by Major Lucas Kunce and Captain Elle Ekman, which provides details that support her NYT op-ed.

Now, for those readers who missed my earlier  post – or who read it. and fancy an update – this week Popular Mechanics published a piece that makes clear that right to repair in the military is a persistent problem, which has not gone away:

U.S. troops in the field are running up against increasingly restrictive licensing agreements signed by the Pentagon that limit their ability to service their own equipment. This presents a readiness and equipment confidence issue, which could make American forces less effective in wartime.

An article at Foxtrot Alpha takes a look at the “right to repair” issue faced by today’s military. The article reports on how changes to the military procurement system allowed the Pentagon more leeway in buying civilian equipment—a good thing by any measure. Unfortunately, those agreements often include similar versions of the civilian warranty, which effectively prohibits civilians from servicing their own equipment.

The right-to-repair issue is relatively new in the world of consumer rights. Restrictive warranty agreements, from iPhones to John Deere tractors, often prevents consumers from making repairs to their own devices or having a third party perform the repairs without voiding the warranty. Manufacturers claim the warranties are necessary in order to ensure the repairs are done correctly, but the repairs are often expensive and more time consuming than allowing the consumer to do it.<

Even for those of us not already completely worn down by accounts of overpriced, bloated weapons systems not fit for purpose, the lack of an ability to repair military equipment – an absence of any military right to repair –  is just another variation on the theme of how the US military manages to waste resources in new and ever more rococo variations.

I’ll close by suggesting that a right to repair is an idea  whose time has come – for both civilian and military applications.