Yves here. America lacks a sense of historical perspective in dealing with long-lived cultures, like that of the Turks. It’s also instructive to look at another not-aggreement-capable player.

Between 11:30 Moscow time on Thursday and 14:00,  President Vladimir Putin spent two and a half hours talking with the Turkish President, Recep Tayyip Erdogan, with interpreters present but no one else, and including lunch and toilet breaks. The two presidents then spent three hours and twenty minutes in talks with delegations of their officials before appearing at 17:22 for another sixteen minutes in front of the press. The Turkish clock for the negotiations counted 5 hours 40 minutes; the Kremlin clock, six hours.

The outcome was a document entitled “Additional Protocol to the Memorandum on Stabilization of the Situation in the Idlib De-escalation Area”. This comprises an agreement of three paragraphs amounting to ten lines, and a preamble of four paragraphs repeating what professionals call boilerplate; that’s to say, points with which everyone agrees in principle, and no one in practice.

The difference between the amount of time and effort expended and the outcome isn’t between the mountain and the molehill. It is the result of the Russian side applying the brief script dictated to Putin by the Defence Minister Sergei Shoigu, the Foreign Minister Sergei Lavrov, and the General Staff led by General Valery Gersasimov,  and  confirmed the day before by the Security Council.

The script is dictated by the principle of the tsarina, Empress Catherine II, during the Turkish-Russian wars of 1768 to 1792. The principle is that nothing the Turks say they agree to or sign  can be relied upon; and that everything the Turks can’t achieve with their army will be tested again and again, until and unless they are defeated by the battle of arms and the defence of territory by more force than the Turks can overcome. The corollary of the Catherine principle is that the new agreement between Putin and Erdogan cannot last for long. Because both sides know this, their heads were in the down position, their eyes averted, for longer than has ever been recorded at their summit meetings before.

Erdogan began the negotiations by announcing he didn’t want to be there, but agreed out of solicitude for Putin. “As you know,” he told Putin in the scene pictured below, “we were going to hold this meeting in Turkey but due to your ongoing work on constitutional amendments, we decided to accept your invitation and come here.”  It was difficult for either man to look each other in the eye over a lie like that.

A Syrian commentator did not miss the significance of the location, publishing a photograph of the Turkish delegation – including Defence Minister Hulusi Akar, MIT intelligence chief Hakan Fidan, Foreign Minister Mevlüt Çavuşoğlu — standing beneath a statue of Catherine which he ringed in red for emphasis. 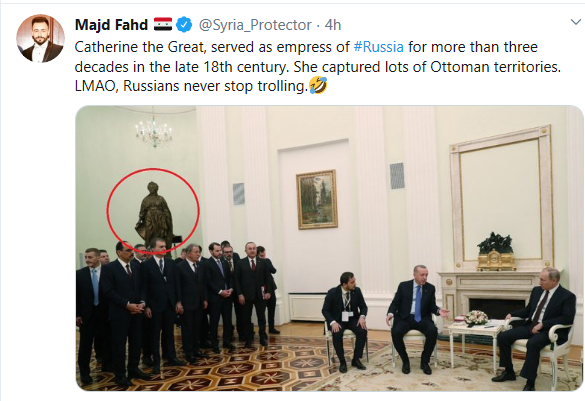 The Kremlin has so far been a model of public reticence. The one important photograph published on the Kremlin website of the initial meeting before the talks got under way was of Defence Minister Shoigu shaking hands with Akar and Erdogan.   The statue under which they were standing was of  Tsar Peter I in military uniform. The day before, Shoigu’s spokesman at the Defence Ministry, Major General Igor Konashenkov, had laid down a marker for the incoming Turks.

“No one in the West notices the actions of the Turkish side,” Konashenkov said in a prepared statement,   “which, in violation of international law, has deployed a strike force the size of a mechanised division to Syria’s Idlib in order to ‘enforce the Sochi agreements at any cost’”. A mechanised division usually amounts to at least 10,000 troops; Russian estimates to date of the Turkish Army deployment in the Idlib zone have counted no more than five battalion groups of about 5,000 men.

These numbers were important in the talks between Putin and Erdogan because the Turks want to add more; through Konashenkov the Russians have said there were already too many. There is no telling what Putin replied to Erdogan in their one-on-one session. The terms of agreement released after the meeting of delegations announce a ceasefire along the line of contact between Turkish and Syrian forces, as they are this morning, together with a 6-kilometre deep “security corridor” on the northern and southern sides of the M4 Syrian national highway, with joint patrolling of the highway and the corridors by Turkish and Russian units, commencing in ten days’ time.

Two sentences in the preamble which the presidents agreed make fresh Turkish arms and additional troops in the Idlib area unlikely. The first is that the Turks accept “their strong commitment to the sovereignty, independence, unity and territorial integrity of the Syrian Arab Republic”; the second sentence says “there can be no military solution to the Syrian conflict”. Western analysts judge these points mean that “this for now also ends the Turkish threat to attack the Syrian army and to reconquer all areas it had liberated over the last months.  Erdogan, who had made many demands, saw none of them fulfilled.”

Russian analysts are more cautious: “Erdogan had to make substantial concessions to get out of the situation,” Boris Rozhin (“Colonel Cassad”) commented.   “The new status quo is fixed by the state of the current front line. The Sochi Line is restored. The М5 highway,  although not explicitly mentioned, remains in Assad’s control, and Turkey is obliged to accept this. Turkey undertakes to unlock Route M4 by March 15. This is one of the conditions of the Sochi deal, which Turkey had not fulfilled. Now she has an express deadline. In addition, it should provide a buffer security zone north and south of the route of 6 kilometres.”

“On the other hand, Erdogan has not given specific commitments to separate the ‘moderate’ and ‘unsettled’ militants, meaning that the presence of jihadi gangs in Idlib retains a high potential for escalation, both with Turkey’s knowledge and simply at the wishes of individual field commanders.”

Read the full text of the agreement in its English version, published outside Russia for the time being: 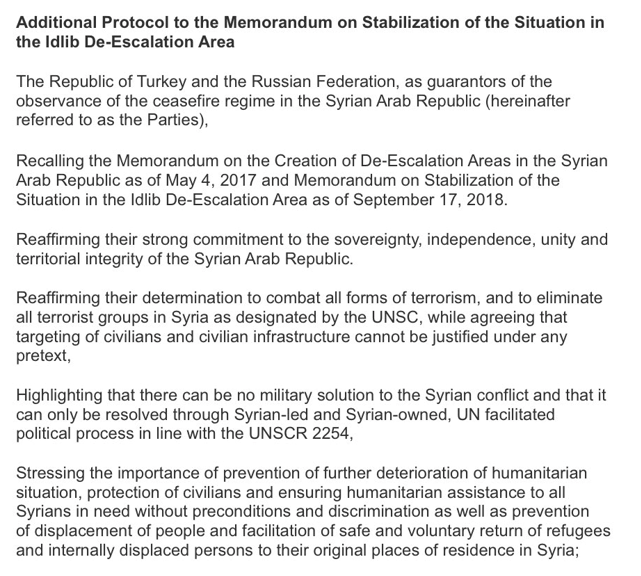 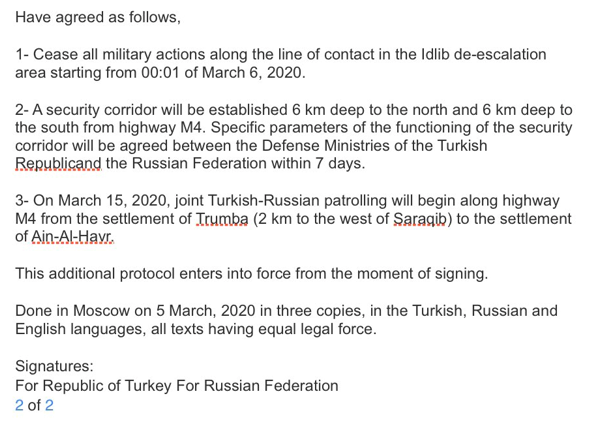 If Erdogan got Putin’s permission to send in more men, tanks and artillery to fill the corridors and reinforce the Turkish side of the contact line, the paper doesn’t say so. As Konashenkov made clear for Shoigu and the Defence Ministry, they do not agree. So far, Lavrov and the Foreign Ministry have remained silent on the talks. The Foreign Ministry website reports  Lavrov had a busy day on Thursday, including a meeting with the President of Togo.  There is no mention of Lavrov at the Turkish talks.

At the presidents’ press conference both Putin and Erdogan had their heads down to read from carefully prepared scripts before Lavrov and Cavusoglu read out the Russian and Turkish versions of the new protocol.

In Erdogan’s script, he said: “Turkey retains the right to respond to any attacks on the part of Syria.” Since this refers to the Syrian Army’s attempts to operate on Syrian territory to recover Syrian sovereignty and territorial integrity, Erdogan’s claim is his excuse to violate the agreement.  This was a press conference without questions or answers.