Lambert here: Nice to have a natural experiment concerning the “Why don’t they just move?” argument beloved among liberal Democrat meritocrats.

Thirty years after reunification, a stark and persistent wage gap between East Germany and West Germany remains. This column studies why East Germans do not migrate to the West to take advantage of the higher real wages there. Analysing data from more than 1 million establishments and almost 2 million individuals over 25 years, it suggests that moving people across space is difficult and costly. Reallocating workers to better jobs at their current location could be a more cost-effective avenue to increase aggregate wages, and even accelerate regional convergence.

Thirty years have passed since German reunification. Workers anywhere in Germany speak the same language, face the same legal system, and are free to accept jobs anywhere in the country. Nevertheless, a stark and persistent wage gap remains between East Germany (the former German Democratic Republic) and West Germany. Figure 1 plots the average wage, adjusted for cost of living differences, in each county in Germany. A 26% real wage gap persists between the two regions. 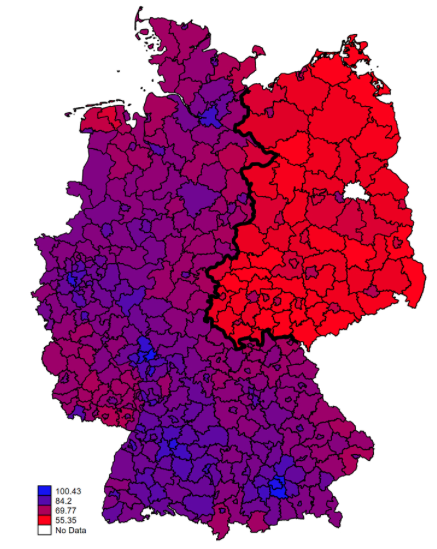 Notes: Average daily wages obtained from a 50% random sample of establishments via the Establishment History Panel (BHP) of the Institute for Employment Research (IAB). Real wages are expressed in 2007 euros valued in Bonn, the former capital of West Germany, using county-specific prices. East–West border is drawn for clarification; there is no border today.

This persistent divide is puzzling because economic theory would predict that East German workers would migrate to the West until wages are equalised in the two regions. However, Germany is not unique in its experience of significant regional inequalities: wage differences across regions are present in many countries (Moretti 2011, Gollin et al. 2014). Understanding the sources of these wage gaps is crucial to inform labour market policy. Should governments try to encourage migration from low- to high-wage regions?

In a recent working paper (Heise and Porzio 2019), we study why East Germans do not migrate to the West to take advantage of the higher real wages there. We track up to 25 years data on more than 1 million establishments and almost 2 million individuals to obtain a detailed picture of their employment histories. When the data are not sufficient to provide an answer, we turn to economic theory.

We find that observable differences in workers’ demographics or industry composition do not explain the wage gap. Instead, we find that 60% of the gap is accounted for by establishment characteristics: establishments in the West pay a given worker a significantly higher real wage. To illustrate this point, Figure 2 shows how the wages of a typical East-born worker and a typical West-born worker change upon a move from East to West Germany (panel a) and from West to East (panel b). We find that the real wage of an East-born worker increases by a staggering 40% when moving to the West. Moreover, we document that East-born workers obtain significantly higher wage gains when moving to the West than West-born ones, and vice versa, suggesting that workers need to be compensated in order to leave their home region. 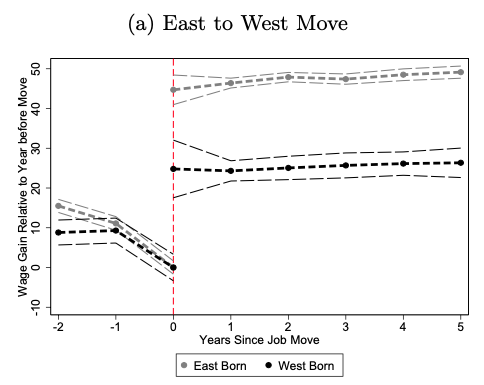 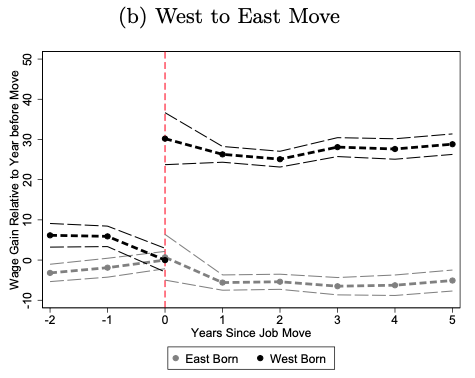 Notes: The figures plot the point estimates of wage changes from an event study of a migration move across the former East–West border, where the wage change is computed relative to the year of the move. East German workers are in grey, West Germans in black. The dotted lines represent the 95% confidence intervals.
Source: Linked Employer–Employee Data (LIAB).

Why Don’t All East-Born Workers Move to the West?

It would be tempting to conclude that large moving costs must be preventing migration. However, this argument is flawed because cross-regional movers are special in two ways: they must have received a job offer to move, and they must have decided to accept this job opportunity. 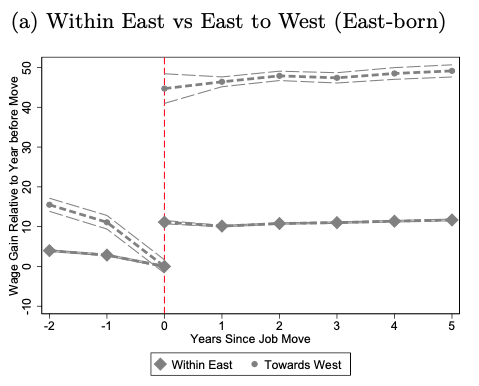 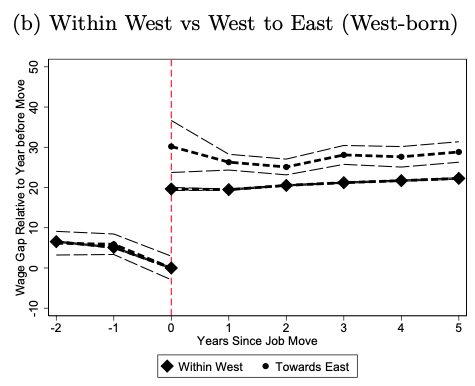 Notes: The figures compare the wage changes of a move across the former East–West border (dashed lines) to the wage changes from a job switch within region (solid lines).
Source: Linked Employer–Employee Data (LIAB).

Workers are in fact remarkably mobile between East and West Germany: about one-third of workers born in the East have at some point been employed in the West. However, we find that workers have a high likelihood of returning to their home region.

Consider an East German worker currently employed in the West German city of Frankfurt who considers switching jobs. We find that the worker is about twice as likely to move to the city of Leipzig in her home region of East Germany than to Munich in the West, even after we control for the amenities of Munich and Leipzig and despite both cities being the same distance away from Frankfurt.

To fully account for workers’ selection and to unpack the spatial barriers into its components, we develop a model of worker reallocation across firms and across regions. Our estimated model shows that the moving costs faced by workers are relatively modest, equal to roughly 4% of lifetime income. This figure is significantly smaller than estimated in the previous literature (Kennan and Walker 2011).

Instead, we estimate that workers have a strong attachment to their birth region. An East-born worker is indifferent between €1 earned in the West and 95 cents earned in the East. Furthermore, we find that workers only rarely receive opportunities to move across regions: a typical East-born worker receives 20 times more job offers from the East than from the West. Finally, we estimate that individual skills are perfectly transferable across regions.

How Did We Reach These Results?

Our model infers them from data on wages and workers’ job-to-job flows both within and across regions. For example, we estimate workers’ strong home attachment from the relative wage increases when moving across regions (see Figure 2). East-born workers receive significantly higher wage increases when moving East to West than West-born workers, even though both types of workers face the same distribution of job opportunities. Our model justifies this behaviour with a strong home bias: East-born individuals need extra compensation to leave their home region.

We simulate two alternative policies in our estimated model. First, we show that subsidising workers’ migration costs does not, in fact, improve aggregate welfare. While average GDP and wages rise slightly, these gains are completely offset by workers’ disutility of living away from their home region. Simply put, East German workers get higher wages when we subsidise their move to the West, but they are less happy.

We compare this result with an equally costly policy that subsidises firms’ hiring costs to make it easier for workers to match with a good job where they are. While this alternative policy delivers just slightly lower average wage and GDP gains, it generates significantly larger welfare gains for the average worker, who does not need to relocate to obtain a higher wage. Thus, policies that improve local labour markets can be more cost-effective than equally costly policies that promote migration to better-paying regions.

A key factor explaining our results is the workers’ attachment to their region of birth. We provide some evidence on its potential sources. Figure 4 analyses the likelihood that workers currently outside of their birth region return ‘home’ after they become parents. We find a significant increase in that likelihood, possibly because workers seek family support.

We also show that workers’ attachment to their home is not specific to the East and West regions, but also holds at the state level. For example, workers born in Bavaria would rather live in Hesse (in the West) than in Saxony (in the East), but still firmly prefer Bavaria overall. This result shows that the home bias is a general phenomenon, not specific to the East–West separation. 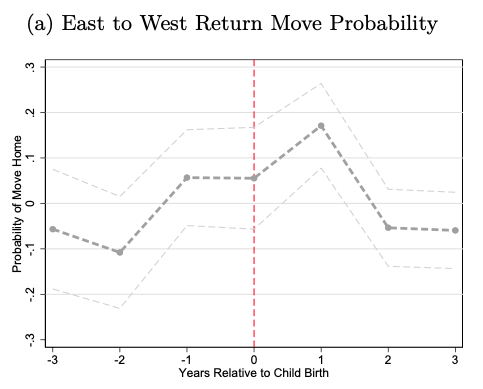 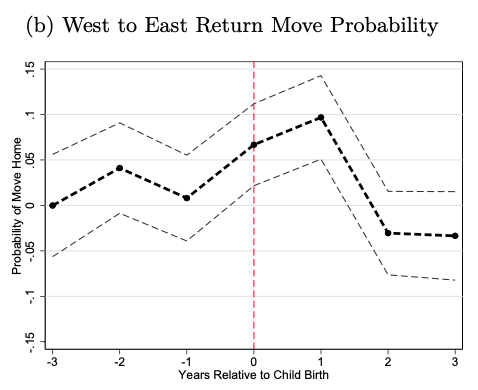 Notes: The top panel shows the probability, around the event of the birth of a child (t=0), that an East-born worker that previously migrated to the West returns back to the East. The bottom panel shows the same for a West-born worker.
Source: German Socio-Economic Panel (SOEP).

Was German Reunification an Economic Failure?

Despite the significant wage gap between East and West Germany today, the gap is much smaller than it used to be. Dauth et al. (2020) study the process of reunification and document large initial wage improvements in the East. Figure 5 shows the wage gap between East and West Germany over time: as is well known, East German wages rose steeply in the first years after reunification, but then convergence essentially stopped. 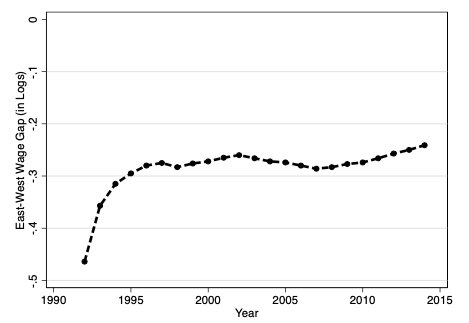 Notes: The figure plots the wage gap (in log points) between East and West Germany over time from the first year from which data is available, 1992, to the last one, 2014. It shows that East wages caught up quickly in the first few years, after which convergence essentially stopped.
Source: Establishment History Panel (BHP).

Dauth et al. find that the initial wage convergence was not mainly driven by migration from East to West, but instead by the reallocation of labour within East Germany. Older birth cohorts, which were most exposed to the static labour market in the German Democratic Republic, were the most likely to switch jobs across firms within East Germany (Figure 6). This reallocation of labour within the East German labour market delivered significant aggregate wage gains. Notes: Black: East-born workers; grey: West-born workers. For each cohort and each time period, and separately for East- and West-born individuals, we compute the share of workers that make a job-job move between two years. The top-left graph plots these computed probabilities as a function of age at reunification, for the first year for which we have data right after the reunification, 1992. The East-born workers, in black, are more likely to change firms. The differences between East- and West-born are more pronounced for relatively old individuals. The top-right graph plots the same probabilities averaged across the period 1993–1996. The bottom-left covers the period 1997–2003. The bottom-right the period 2004–2013. The young cohorts that enter the labour market after reunification behave the same, irrespective of their birthplace. Instead, the cohorts exposed to the German Democratic Republic labour market are more likely to change employer even 20 years after reunification.
Source: Universe of employees subject to social security from the IAB Employee History File.

Our work thus points to the following conclusion: moving people across space is difficult and costly. Reallocating workers to better jobs at their current location could be a more cost-effective avenue to increase aggregate wages, and even accelerate regional convergence.

Authors’ note: The views and opinions expressed in this column do not necessarily represent the views of the Federal Reserve Bank of New York or the Federal Reserve System. This study uses the weekly anonymous Establishment History Panel (Years 1975 – 2014) and the Linked Employer-Employee Data (LIAB) Longitudinal Model 1993-2014 (LIAB LM 9314). Data access was provided via onsite use at the Research Data Centre (FDZ) of the German Federal Employment Agency (BA) at the Institute for Employment Research (IAB) and remote data access. The study also uses data made available by the German Socio-Economic Panel Study at the German Institute for Economic Research (DIW), Berlin. Neither the original collectors of the data nor the archive bears any responsibility for the analyses or interpretations presented here.