This post will be a bit of a ramble, and sadly, not a general theory. First, I’ll do some ranting and moralizing, and then I’ll quickly look at some of the “Reopen” protests, especially the messaging, and lastly I’ll look at one reason the “Reopen” protests are not as irrational as they might seem. I should caveat, as before, that I am in an extremely, as we say, privileged position with respect to the lockdowns, because my life is already locked down: I’m very introverted, work from home, enjoy my work, don’t have to do video-conferencing, have several consuming side projects, have no onerous responsibiltiies to others, and although I’m older, hence vulnerable, I can arrange my life so I have only very brief human contact, masked. If I don’t do anything stupid — not a foregone conclusion, I grant — I can hold out for a long time. So my attitude no doubt tends offensively to: “What’s the issue, here?” That said, I promised I’d rant and moralize, to here goes.

This is the best thread I have seen on appropriate (gawd, how I hate that word) behavior during the pandemic. From a New Yorker:

The reason I thought of the lions is because of their names and how they got them. I didn’t know they had names until recently, and while it’s good New York Trivia, most people I’ve talked to didn’t know it either.

Patience to keep up pandemic discipline until the crisis is past; fortitude to bear the life changes necessary for the greater good. And foster kamer is right that most people are doing that.

But — and here is where I turn into whatever the male equivalent of a Karen is, because I really, really want to call the manager on “these people” — this seems to be the basic attitude of those who don’t take social distancing and masking seriously

“Your health is not more important than my liberties” implies, for example, that there can be no such thing as public health (“The right to infect others shall not be infringed”).

ENOUGH! This was TODAY on a four hour flight. This is not okay. Masks must be mandated by DOT/HHS in airports and on airplanes. Essential travel only, with proper PPE. #COVID19 #StopTheSpread pic.twitter.com/TzwJyVRBoD

That’s insanely dangerous! It’s an air-condioned, enclosed space with people jammed together! And the unmasked goons are turning it into a death trap!

And then, of course, we have the beaches. California:

Seeking relief from a heat wave, thousands of people crowded beaches in Southern California this weekend amid the coronavirus pandemic, despite a statewide stay-at-home order implemented by the governor last month. https://t.co/do3svW3uyX

Where’s the social distancing? And not to pick on California, Florida:

Perspective: In Florida, we love our beaches. Thanks to our governor, now we can die for them. https://t.co/Cf4KFnd5ub

Now, caveats on the beach photos. First, the lens used is probably making groups of people seem close together. However, the groups themselves are still very close (so in addition to violating the stay-at-home order, they’re violating social distancing norms, and masking norms). Second, while the evidence for indoor transmission is very strong, the evidence for outdoor transmission is weak. However, these groups are close; and they are probably sharing drinks, towels, and everything else one brings to the beach. So I think they’re goons with no consideration for others; the kind of people who’d talk loudly on their cellphone in the Quiet Car. And it would be fine with me if Darwin gave his Award only to the goons, but the goons are infecting others. “I had a beautiful day on the beach with the whole family and all the kids, or at least it was beautiful until the blood and pus began rising in Dad’s lungs.” Except it might not be their Dad, but somebody else’s. But enough of my critique of the culture of narcissism, and on to the protests.

I won’t go into the overly political aspects of the protests (dubious funding; Trump’s failed attempt to leverage). My concern was that we were looking at the seeds of “mass-based party of committed nationalist militants,” where fascism in the United States would move to its second stage; the protests seemed to vary greatly in size and force by state. (I’m not sure what happened; it may be that GOP donors decided the protests were a little too rich for their blood; or that the FBI has the protests groups all wired up; or that they are completely fractionated and divided into sects. Note that if the protests had been organic, antifa would have been all over them; antifa watches for that sort of thing, and enjoy the confrontations).

Let me single out the largest, Wisconsin:

Here for comparison is one of the crowds in the Wisconsin Capitol Occupation of 2011: 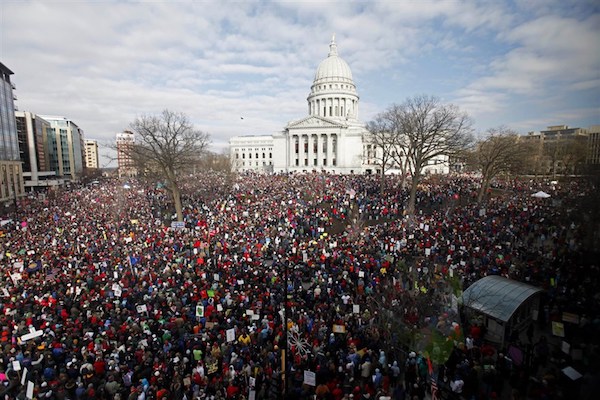 (I’m also including this to ding the national Democrat Establishment, including Obama, for not lifting a finger to help Wisconsin Democrats, either during the 2011 protests or the subsequent 2012 recall election, thereby ushering in the brutal and squalid Scott Walker regime.) So the crowd size is not all that impressive. Not much to worry about, at least for now.

However, amidst the American flags, and the gunz, and the Trump signs, there is a discordant note. Here it is:

“All jobs are essential.” And again:

Well, if one strips the “___ lives matter” snowclone, I agree with the sentiment: All workers are essential. Could it be that some of the protesters are on to something?

So let’s do a little curation here. First, here’s the an especially crude version of the message workers are being sent:

Whole Foods is giving workers a new work uniform shirt with "hero" on the front and "hardcore" on the back as hundreds of workers have gotten sick and at least 2 have died from coronavirus for just a $2 an hr wage increase pic.twitter.com/2OJzD1sD9T

But workers don’t necessarily see themselves as heroes[1]:

And of course a hostage situation is a power relation:

The only lesson I'm learning is that the state has always had the means to help poor people. But will only do so when poor people's labor is required to keep wealthier people alive and comfortable https://t.co/rG1weRoczq

This fascinating review of a book on the plague in 17th century Florence [linked to at NC on 4/17] quotes a wealthy Florentine who opposed the city’s policy of delivering food to those under quarantine, because it “would give [the poor] the opportunity to be lazy and lose the desire to work, having for forty days been provided abundantly for all their needs”. It’s striking how widespread similar worries are today among our own elite. It seems like one of the deepest lessons of the crisis is that a system organized around the threat of withholding people’s subsistence will deeply resist measures to guarantee it, even when particular circumstances make that necessary for the survival of the system itself.

(Or, to translate this into the notation preferred by the Bearded One, C-M-C’.) And here is Pelosi, whose blitherification is approaching Biden-esque proportions, doing the liiberal Democrat “deeply resist” thing (do listen):

Workers have to work. They need to sell their labor power, a commodity, (C) to get money (M) that they can use to by the means of subsistence, more commodities, e.g. food (C’) to work the next day. And the M is sorely lacking. There are no wages. The unemployment system is a shambles. The one-time $1200 payment is derisory. Meanwhile, Republcians and Democrats shovel trillions to malefactors of great wealth, unanimously, without a single dissenting vote. What are workers to do? The only option on the table — because no others have been offered — is to go back to work, and “re-open.” Jacoibin comments:

Things will only get worse as the lockdowns drag on. Steven Crowder may be a clownish reactionary charlatan, but he’s not entirely wrong to say that all jobs are “‘essential’ for those who rely on them for a living.” The rest of us won’t win the argument if our response makes it sound like we think basic economic concerns are as frivolous as a demand for a haircut and that everyone whose job or small business has been wiped out by the crisis should just grit their teeth and make ends meet. While supporters of the protests are a distinct minority, that might not last. The longer the lockouts last without a mass bailout for workers, the more ordinary people will be inclined to side with the protesters.

For some definition of “side with,” possibly kinetic.

So we have a pandemic that’s much more lethal than we thought, from a virus that’s highly contagious and produces a death that is a very bad way to go, whose epidemiology is not well understood, whose course appears unpredictable (e.g., strokes are new), for which there is no recognized treatment protocol, and for which a vaccine, if one is every available, is at least a year away.

Under those conditions, we propose to “return to normal” and “re-open.”

There Is No Alternative. Patience, fortitude…

[1] If the definition of a hero includes courage and noble qualities, then I put working x number of shit jobs to feed one’s children in the heroic category. How could one not? “They work every day.” –Jesse Jackson.