Foreign Affairs just published an article that attempts to depict the failed Swedish approach to Covid-19 as not just a success, but even the way of the future. I suppose if you regard failed state in the making like the US as a harbinger, you could view this description as accurate. But nations that aspire to better like South Korea, New Zealand, Germany, and the Czech Republic, would beg to differ. As reader juno mas put it earlier this week, “For a relatively rural, isolated nation, Sweden is a train wreck.”

Mind you, the problem isn’t that the view expressed in the Foreign Affairs piece, in the words of a prominent economist, is “unmitigated horseshit”. People are allowed to say stupid things if nothing else to give parties with a better grasp a punching bag.

It’s that Foreign Affairs failed to disclose that this piece, which touts keeping workplaces and shops open regardless of the cost in lives, was funded by Swedish employers,. Oh, and as we’ll point out soon, this “Who cares if more people die” posture hasn’t helped the Swedish economy much either, even though that’s the supposed justification for running unnecessary health risks. Yet Sweden getting the worst of all possible worlds is nevertheless spun as an accomplishment, and more incredibly, a model.

Specifically, the authors of this piece are all key figures at the Swedish think tank Ratio Institute. Lead wrier Nils Karlson is its president and CEO; Charlotta Stern is Deputy CEO, and Daniel B. Klein is an Associate Fellow. The article lack of a disclaimer that the authors’ opinion and does not reflect the view of Ratio. It is therefore on its face a piece that makes no bones about being official Ratio work product.

And what is Ratio? From Wikipedia:<sup

The Ratio Institute is an independent Swedish research institute focusing on the conditions for enterprise, entrepreneurship and market economy and political change. The institute’s infrastructure is financed by the Confederation of Swedish Enterprise, but various research projects have financiers like the Wallenberg Foundation.

And who is the Confederation of Swedish Enterprise? Again from Wikipedia:

The Confederation of Swedish Enterprise or Swedish Enterprise (Swedish: Svenskt Näringsliv) is a major employers’ organization for private sector and business sector companies in Sweden. It has 49 member associations representing 60,000 member companies with more than 1.6 million employees.

Its budget is the equivalent of $100 million which is not shabby for a country with a population of 10 million. And in case you had any doubts, Jacob Wallenberg, whose family investment entity is far and away the biggest employer in Sweden, forcefully advocates for favoring the economy over public health. From the Financial Times at the end of March. As one Financial Times reader reacted:

A bit ugly to see a rich man talking his book when lives are at stake. The government can make welfare payments to the unemployed, it can’t raise the dead.

Let’s turn to the controversy. Sweden has implemented only minimal Covid-19 public safety measures. Schools and restaurants are open but soccer season has been put off and university buildings are shuttered. Citizens are advised to stay home and avoid travel, but with virtually all businesses open, it’s hard to see how that works.

Here’s an updated chart from EndCoronavirus.org. As you can see, most major European countries fall in the “almost there” category. Note that many smaller nations, like Croatia, Greece, Iceland, Estonia, Slovakia and Slovenia are classified as “beating Covid”: 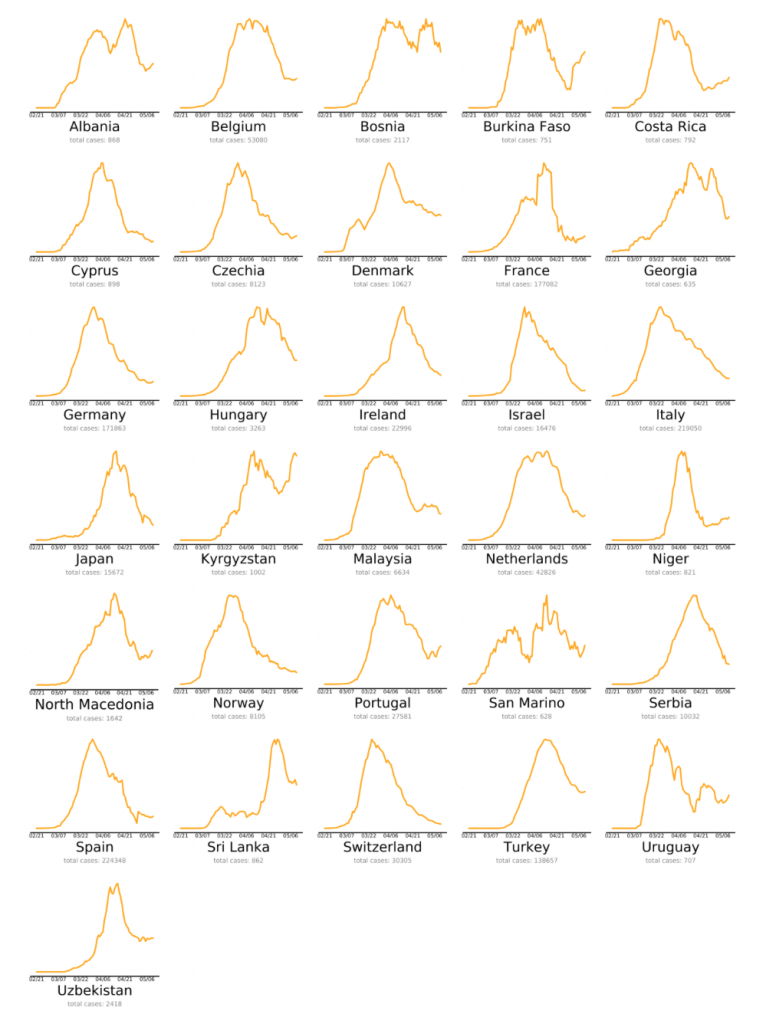 Not only has Italy wrestled its infection level down, but so too has Norway, which early on had the second highest contagion level in Europe.

By contrast, here is Sweden: 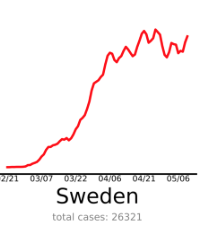 Admittedly, Finland is also classified as not getting the disease under control, but as we’ll see soon, its level of infection per capita is an order of magnitude lower than Sweden’s.

Sweden’s approach was getting fierce pushback from experts a month ago, demonstrating that its failure was evident even then. From an April 14 article in Forbes:

Sweden’s relatively relaxed approach to controlling the spread of the coronavirus has come under fire in international media and from many locals in the capital Stockholm, where more than half the country’s deaths have been recorded. Now, 22 researchers have publicly criticized the strategy and called on politicians to make changes

In an opinion piece published today in Dagens Nyheter, the group of researchers from a range of top Swedish universities and research institutes make harsh criticism of the Swedish Public Health Agency and their present coronavirus strategy. They say that elected politicians must now intervene with “swift and radical measures.”

The researchers say the agency has claimed on four different occasions that the spread of infection has levelled out, despite evidence to the contrary. They point out the slowdown in infections and deaths in Finland, which has implemented much more restrictive measures….

The researchers highlight Finland, which has recorded ten times fewer deaths than Sweden on a per-person basis. Sweden’s deaths as a percentage of population is also much higher than Denmark and Norway, which have also introduced strict measures.

Since these scientists weighed in, Swedish officials have had to admit to negligence in handling elder care homes, where workers weren’t supplied with PPE and lacked guidance. From France24:

Sweden, whose softer approach to the coronavirus has garnered international attention, admits it has failed to adequately protect the elderly, with around half of COVID-19 deaths occurring among nursing home residents.

Reports have flooded Swedish media in recent weeks of care home staff continuing to work despite a lack of protective gear.

Others have refused to work and workers are encouraged to stay home even with mild symptoms, leaving homes short-staffed.

Other personnel have admitted going to work despite exhibiting symptoms of the virus, potentially infecting residents, while some elderly have reportedly been infected while admitted to hospital for other treatments and then sent back to care homes where they unwittingly spread the disease.

Sweden has almost nothing to show for its human toll. Just as one economist said of Chile under Pinochet: “People died so markets could be free.” Even the Wall Street Journal won’t put lipstick on this pig: 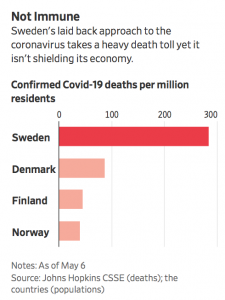 Shops, restaurants and even nightclubs have been allowed to stay open in Sweden. There are no curbs on the manufacturing and services industries. But that doesn’t mean life is normal here.

Despite recent warm weather, streets are quieter and business is slower because many Swedes, like Ms. Sandblom, take government guidelines seriously and even go beyond them to avoid catching the highly contagious pathogen.

All of that is contributing to what Sweden’s government estimates will be a 6% contraction in domestic consumption this year. Combined with a forecast 10% drop in exports, Swedish authorities predict, the result will be a 7% decline in overall 2020 economic output. The eurozone economy as a whole is projected to contract by about 8% this year, according to a European Commission estimate.

Now let’s turn to how the Foreign Affairs piece tries to spin this sorry state of affairs. It begins by depicting public health measures, which even now, polls in the US and the UK show citizens overwhelmingly want to continue until coronavirus is under better control, as authoritarian. And that makes Sweden a lone shining “because freedom” model.

The employer shills then embarrassingly tries the canard that Sweden is well down the path of practicing eugenics creating herd immunity. In fact, no one knows if contracting coronavirus confers anything more than short-term immunity. Even if it did, the high virulence means over 82% of the population would need to have gotten sick for the disease to die out on its own, and not the much lower level touted in the article.2 Oh, and Sweden does not have a firm handle on how many people have gotten the disease. Consistent with its thin connection with facts, the authors also assert that Sweden is “flattening the curve”. Um, a less steep incline is not flat.

The authors nevertheless baldly claim: “When much of the world experiences a deadly second wave, Sweden will have the worst of the pandemic behind it.” No one in the US, which as we pointed out is in a similar spot-death wise, believe that, except perhaps fringe wackos. It’s just embarrassing to see Foreign Affairs dignify tripe like this.

Contrast this piece with a CNN op-ed by a bona fide expert, Yaneer Bar-Yam, of the New England Complex Systems Institute, an expert on pandemics and other complex systems. He also advises the WHO Global Outbreak and Alert Response Network on Ebola eradication. Bar-Yam was the co-author of a January paper with Nassim Nicholas Taleb that warned that coronavirus had already spread too far for contact tracing to be an effective containment strategy, and instead recommended travel bans, masks, and social distancing. His current take:

Many governors are opening up their states as part of the White House effort to reopen the country. But as a pandemic expert who has been warning about diseases like Covid-19 for nearly 15 years, my message to Americans is simple: save yourselves, your families and your communities by staying at home and ignoring your governor’s “ludicrous” policies…

Citizens should know that reopening states is very unlikely to restore economic well-being. In fact, prematurely reopening society would likely cause the disease to escalate and lead to prolonged economic hardship…

But, based on research I’ve conducted, I believe that if we take a more aggressive approach now and keep towns and cities locked down, we can defeat Covid-19 in four to six weeks…More than a dozen countries have flattened the curve and substantially decreased daily new infections by ensuring strong lockdowns, facemasks for everyone, strict travel restrictions and isolation of infected individuals away from home. Countries that have not imposed sufficiently strict measures, like the US, continue to struggle to contain infection rates….

Now, I and many others are issuing another warning: the decisions of some US governors to prematurely ease social distancing is a disastrous mistake and citizens need to ignore them. Our research — and common sense — show that lifting social restrictions will lead to an explosion of Covid-19 cases and cause countless more deaths. The correct way to relax restrictions is to start with parts of a state that are Covid-free for 14 days and allow only essential travel to those parts of the state with 14-day quarantines for inbound travelers.

Foreign Affairs has made itself a menace to the public by running Swedish business propaganda and not even telling readers of the glaring conflict of interest of its authors. And if the Ratio trio thinks they are really onto something, let them prove their bona fides by publishing an academic-level piece and subjecting it to scrutiny. You can be sure they won’t because they are selling an empty bag.

1 The US has only 10.8% of its population living in single-person households versus 18.4% in Sweden, and Sweden has universal health care, so the mortality level is even worse than the raw data suggests.