One wonders what sexual favors were exchanged for the normally well-regarded publication Nature to run a defense of the indefensible, in this case, an obviously half-baked idea for Seattle residents to volunteer themselves for a home science study by jamming swabs through their noses to the back of their throats to collect their own Covid-19 samples and send them in by mail. Remarkably, the FDA woke up, cleared its throat, and said it needed to evaluate this “do it yourself” specimen collection.

Now mind you, that’s actually the more charitable interpretation as far as the Gates Foundation and the FDA is concerned. It is possible that the Seattle testing initiative was using mere nose swabs (as in just of the nasal cavity), which is not the current standard for Covid-19 tests. If that is so, the Gates Foundation and its allies in the Seattle medical-academic community are setting out to promote tests that are known to be less accurate via inferior sample collection. They will endanger patients and the public by virtue of generating false negatives due to choosing inferior sampling methods.

Yet Nature wails over the FDA stopping a testing program that either way was sure to generate a lot of bad samples and therefore bad results in Scientists baffled by decision to stop a pioneering coronavirus testing project.

Honestly, any scientists who are “baffled” are revealing their lack of powers of observation and common sense.

So what accounts for Nature shilling for such a flawed program? The too-obvious explanation is Bill Gates’ influence. He is the big money behind this so-called SCAN.

Before we take apart the Nature story (actually two but the second one is more important), it goes without saying that the US has a problem with Covid-19 testing, that in general, not enough is being done, and those who are worried that they might have contracted it don’t want to show up in an emergency room or outpatient clinic and risk getting infected. And medical professionals probably aren’t so keen about handling Covid-19 tests interspersed with other duties, particularly if they don’t have the best PPE to begin with. The same conundrum exists with going to your regular MD’s office to get tested (assuming you have one and assuming he’ll even test you).

However, South Korea already solved this problem: drive up testing. They also have walk-in testing stations, well enough staffed that there is no wait. Even in the supposedly backwards Deep South, we had drive up testing here in Birmingham, 20 minutes from where I live, up and running less than ten days after schools closed. I’ve seen more sites opened since then.

And I have not seen how the US version of these set-ups work, but in South Korea, all of the medical techs are hazmat-suited up, so they look well protected. As they ought to be in the US.

And here is why you want medical professionals to gather those samples. This is how the swabbing is supposed to be done: 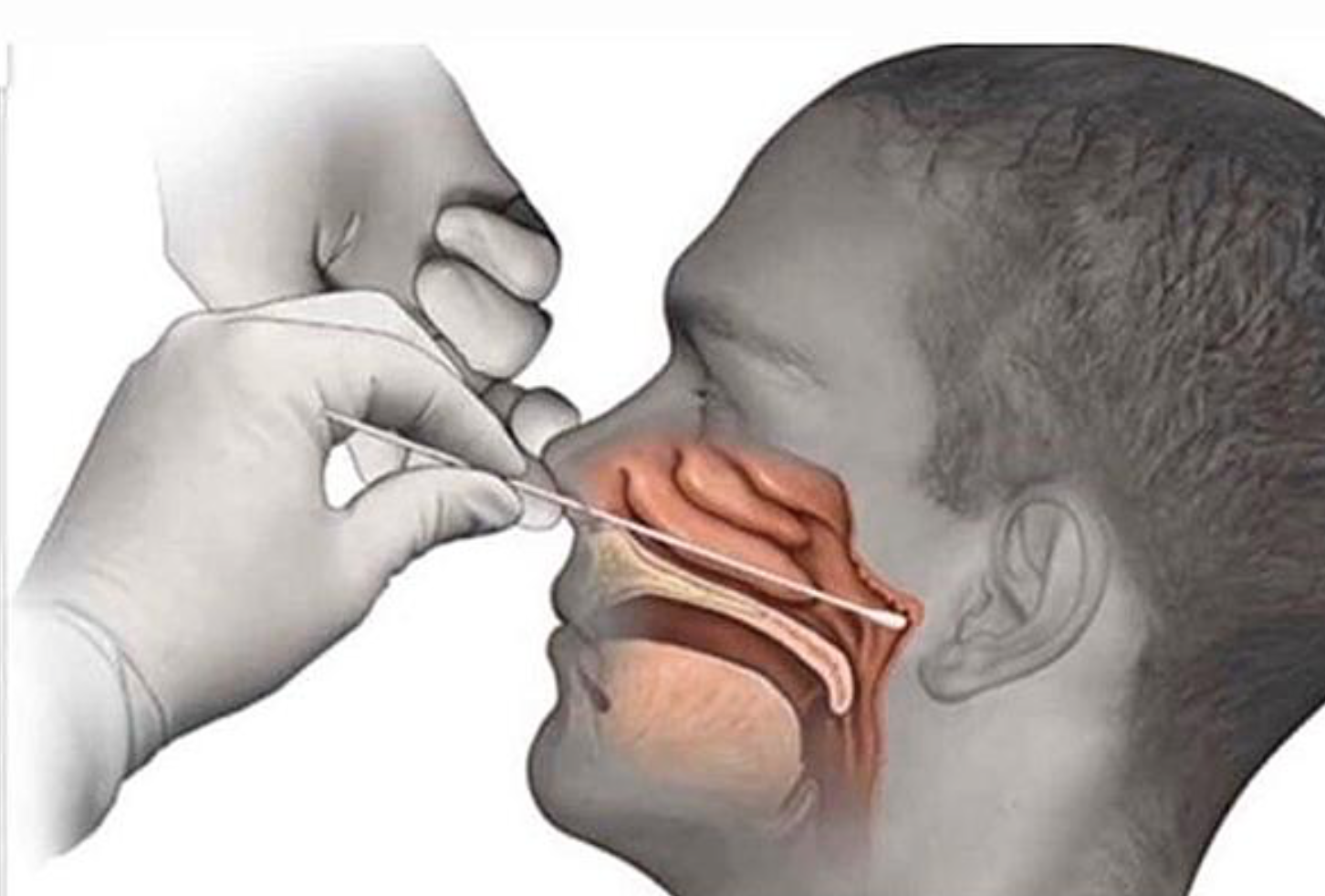 In other words, this “nose swab: which is more accurately called a “nasopharyngeal swab” is very invasive, as this Chicago Sun-Times story confirms (emphasis ours): 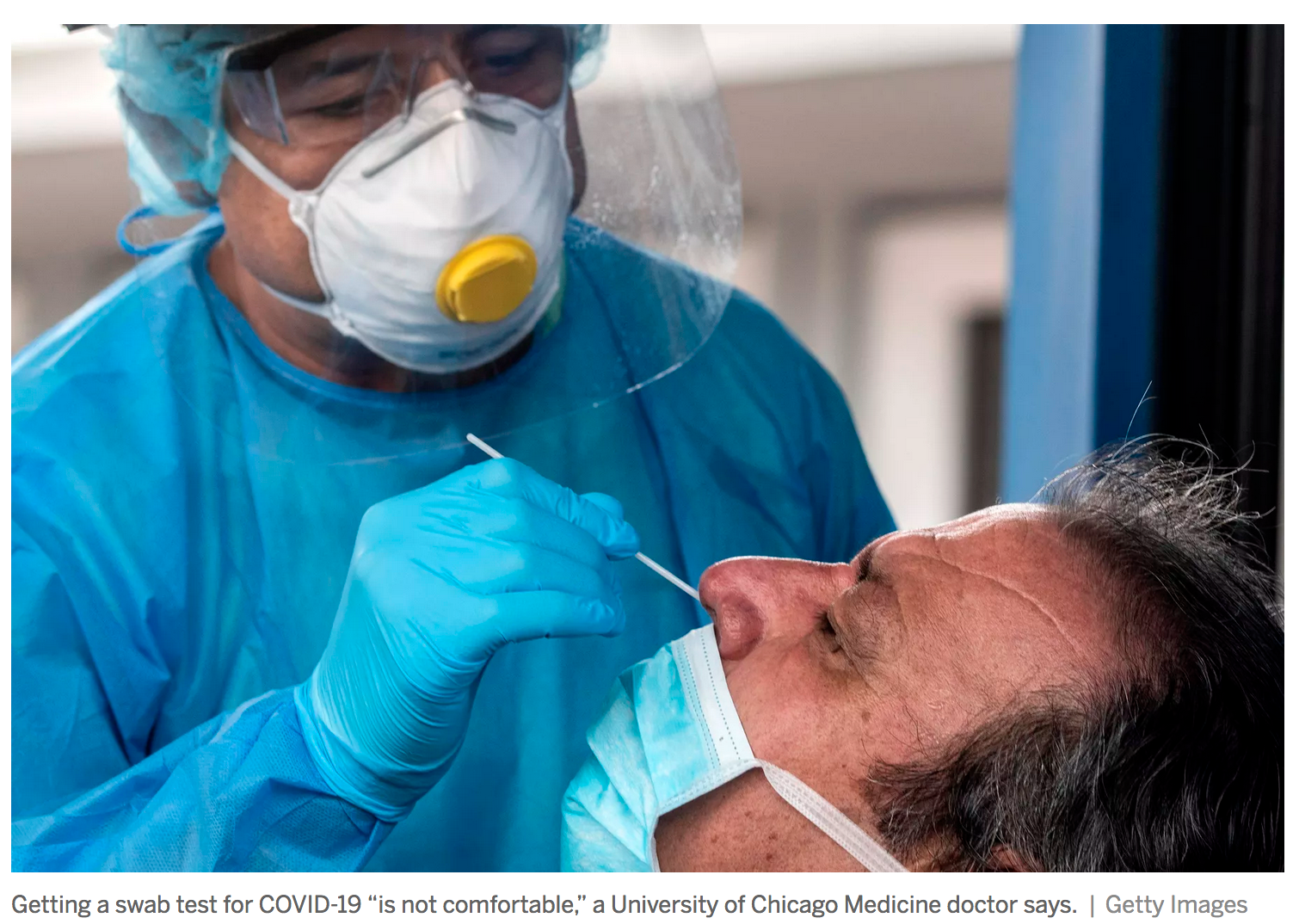 It isn’t pain like you feel from a shot. Instead, think about how it felt if you’ve gotten chlorinated water up your nose in a swimming pool.

The complex nerve endings in your nose told your brain: That’s not right, there’s something bad in there. And that burning sensation makes you want to blow the water right back out.

Well, the swab test for COVID-19 is more intense than that.

“It’s a deep burning, and it often elicits tears and sometimes coughing,” says Molly K. Erickson, a nurse practitioner at Rush University Medical Center who helped set up the Chicago hospital’s testing sites. “That discomfort really comes with getting an adequate sample.”

Got that? The test is nasty because it has to be to do the job properly. The nasty bit is hopefully short lived but that isn’t a given. For instance, in Business Insider:

While momentarily uncomfortable for most, it was “excruciating” for Pauw, who already had swollen nasal passages and had to drive 45 minutes to Tacoma, Washington, to get one.

“It feels like being stabbed, to me, in a really sensitive place and then having it be twisted,” she said. “And then, they had to do it twice.”

Even when it was over, Pauw didn’t feel better. In fact, she and her husband had just gotten on the freeway home when Pauw passed out. Fortunately, she wasn’t driving. “That was a horrible experience,” she said. “That was the very worst day of it all.”

One reason this test isn’t easy to administer is 70% to 80% of the population has a deviated septum, which means for them, there isn’t a perfectly straight path from their nostrils to the back of their throats
.
And while the plural of anecdote is not data, I happened to grumble to a colleague about the idiocy of expecting people to jam nose swabs to the back of their throats to do their own Covid-19 sample collection. He gasped out loud. Within the last hour, he’d gotten a call from a friend who’d gotten the Covid-19 sinus jab five hours earlier. He was on the verge of tears, he was in so much pain. “How can I ice myself in there?”

Mind you, the SCAN project has taken some important steps. It did help address a bottleneck, which was a shortage of test equipment. As a March 6 Nature article described, apparently before the home testing part had been launched, how lab testing initiatives exploded in Covid-19 hotspot Washington state after the FDA on February 29 authorized some academic labs to run tests. The Seattle Flu Study, dating from 2018, where people who think they have a bug send in nose swabs for analysis.

If you look at this video and instructions on how to do a flu swab, the “preferred method” is to use a swab that goes just as far back in the sinus cavities.

This raises the question as to the integrity of the Seattle Flu study process. Did they use the invasive nasopharyngeal swabs, or the more patient-friendly nose swabs? Plus for flus, a study published by the NIH didn’t find a major difference in results between nose swabs and the more daunting nasopharyngeal swab. But the nasal swab had a mere 89% accuracy versus 94% for the nasopharyngeal swab. That seems significant, particularly when a deadly disease is in play.

Back to the Nature stories. Here’s the snippets on the Gates efforts from the early March account:

Some of this burden could soon be relieved as the Seattle Flu Study changes course. This week, the Bill & Melinda Gates Foundation in Seattle said that it will furnish the study with another US$5 million. People who feel ill but aren’t in dire need of hospital care can now order the swab kit from the study website….

Dan Wattendorf, who directs efforts to create biotechnology solutions at the Gates Foundation, hopes that people with bearable illnesses will stay at home and order the kit, instead of going to hospitals where they could transmit the virus — or catch it

Notice the reinforcement of the false dichotomy: testing at home or testing in hospitals. No consideration of drive-by tests, or the medical vans created by Arnold Schwarznegger and disbanded by Jerry Brown as part of a pandemic emergency response program.

A correction to the story notes that Bill Gates has long has had his fingers in this Seattle testing pie:

It also said that the Seattle Flu Study was funded by the Bill & Melinda Gates Foundation. In fact, it is funded by Gates Ventures, an investment firm founded by Bill Gates. The Gates Foundation has provided funds for the study’s extension to COVID-19.

So Gates has a commercial, not charitable, motive. Glad we have that clear.

You’ll see in the second story simply brushes off the key question: could these at home samples be adequate? The FDA has every reason to be worried. Unlike the original Seattle Flu study, whose main goal was to trace the spread of seasonal bugs through the Seattle area, here the stakes are much higher: do you have a potentially deadly ailment or not? Do you need to self-quarantine and monitor your symptoms?

And if you watched the video or read the instruction, proper sample collection isn’t merely getting that swab to the back of your throat and removing it. The med tech is supposed to rotate the swab (up to five times!) and hold it in place five to ten seconds.

The May Nature story explains how the SCAN group exploited a loophole:

The FDA’s request to pause testing on 12 May frustrates many researchers developing diagnostics that can be conducted partially or fully outside hospitals…..

The researchers assumed that they were in the clear because the FDA had granted Washington state the ability to authorize emergency use of COVID-19 tests. In February, FDA guidelines precluded at-home testing from this type of provision, but made no mention of at-home specimen collection, which is how SCAN operates. As of 11 May, however, updated FDA guidelines do specify that tests with at-home collection need to be assessed by the agency.

It’s not clear the FDA has focused on the swabbing issue. It is concerned about samples possibly degrading via getting hot in transit. Having said that, the FDA has approved three “home based tests.” However, looking at test video from Labcorp, which has one of the “good to go” tests, it really is a nose swab, not a nasopharyngeal swab. So the FDA has signed off on a significant sacrifice in accuracy for the sake of convenience.

Back to the Nature account, which features the worst sort of “assume a can opener” thinking:

Robin Patel, president of the American Society for Microbiology, who is based at the Mayo Clinic in Rochester, Minnesota , says that researchers have long called for diagnostic tests to be deployed outside of healthcare settings. “This push is being accelerated now by COVID-19, because the reasons to do this are so apparent in an outbreak.” A model that requires health workers to draw samples can’t easily be scaled up. It’s labour intensive, and is risky for the workers required to stick long swabs up people’s noses.”

Yes, and it would also be nice if patients could draw their own blood so as not to expose health care workers to them either. Help me. How about investing in Ebola-level PPE instead?

So the answer is defective sampling and people getting false negatives because they didn’t swab adequately or contaminated the sample?

The article unintentionally makes clear that the vetting of the SCAN process didn’t check the accuracy of home-brew samples versus med tech collected samples:

In late February, the SCAN team cleared a first set of regulatory hurdles with the US Centers for Disease Control and Prevention. Next, the group analysed about 30 specimens with its own test alongside other assays in clinical labs, to vet its accuracy. With the data from these experiments, Washington’s department of health authorized the researchers to screen people and return the results to them.

In other words, the samples were assumed to be hunky-dory.

And it looks as if Nature completely missed the real story in lining up to defend Gates: that the FDA is approving home tests with nose swabs, which may indeed be what the SCAN tests were using, which studies have found to be markedly less accurate that the obnoxious nasopharyngeal swab. The result will be false negatives, meaning people who are sick will think they aren’t, and will infect others and possibly get quite sick before they get a second test and find out they have Covid-19. And all for the sake of Gates and commercial lab profiteering rather than staffing up and suiting up techs to conduct drive up and other more local tests.