Yves here. Good to see actual data that shows the considerable difference between how the press treated the pink pussyhats, versus both people of color and whites protesting police violence against blacks. But the media isn’t the only part of the problem. Recall that when Black Lives Matter die-ins were becoming popular and getting media attention, the Democratic party managed to infiltrate many Black Lives Matter groups and the die-ins died off (Lambert chronicled this back in the day and can name names). Similarly, it isn’t just Trump that called protestors against murder-by-cop “thugs”. As Lambert showed in Water Cooler yesterday, the sainted Obama did so at least twice during his term in office.

A teenager held her phone steady enough to capture the final moments of George Perry Floyd’s life as he apparently suffocated under the weight of a Minneapolis police officer’s knee on his neck. The video went viral.

What happened next has played out time and again in American cities after high-profile cases of alleged police brutality.

Vigils and protests were organized in Minneapolis and around the United States to demand police accountability. But while investigators and officials called for patience, unrest boiled over. News reports soon carried images of property destruction and police in riot gear.

The general public’s opinions about protests and the social movements behind them are formed in large part by what they read or see in the media. This gives journalists a lot of power when it comes to driving the narrative of a demonstration.

They can emphasize the disruption protests cause or echo the dog whistles of politicians that label protesters as “thugs.” But they can also remind the public that at the heart of the protests is the unjust killing of another black person. This would take the emphasis away from the destruction of the protests and toward the issues of police impunity and the effects of racism in its many forms.

The role journalists play can be indispensable if movements are to gain legitimacy and make progress. And that puts a lot of pressure on journalists to get things right.

My research has found that some protest movements have more trouble than others getting legitimacy. My co-author Summer Harlow and I have studied how local and metropolitan newspapers cover protests. We found that narratives about the Women’s March and anti-Trump protests gave voice to protesters and significantly explored their grievances. On the other end of the spectrum, protests about anti-black racism and indigenous people’s rights received the least legitimizing coverage, with them more often seen as threatening and violent.

Decades ago, scholars James Hertog and Douglas McLeod identified how news coverage of protests contributes to the maintenance of the status quo, a phenomenon referred to as “the protest paradigm.” They held that media narratives tend to emphasize the drama, inconvenience and disruption of protests rather than the demands, grievances and agendas of protesters. These narratives trivialize protests and ultimately dent public support.

Here’s how this theoretically plays out today:

Knowing this, protesters find ways to capture media and public attention. They don pink “pussy” hats or kneel during the national anthem. They might even resort to violence and lawlessness. Now the protesters have the media’s attention, but what they cover is often superficial or delegitimizing, focusing on the tactics and disruption caused and excluding discussion on the substance of the social movement.

We wanted to explore if this classic theory fit coverage from 2017 – a year of large-scale protests accompanying the first year of Donald Trump’s presidency.

To do so, we analyzed the framing of protest reporting from newspapers in Texas. The state’s size and diversity made it a good proxy for the country at large.

In all, we identified 777 articles by searching for terms such as “protest,” “protester,” “Black Lives Matter” and “Women’s March.” This included reports written by journalists in 20 Texas newsrooms, such as the El Paso Times and the Houston Chronicle, as well as syndicated articles from sources like the Associated Press.

We looked at how articles framed the protests in the headline, opening sentence and story structure, and classified the reporting using four recognized frames of protest: 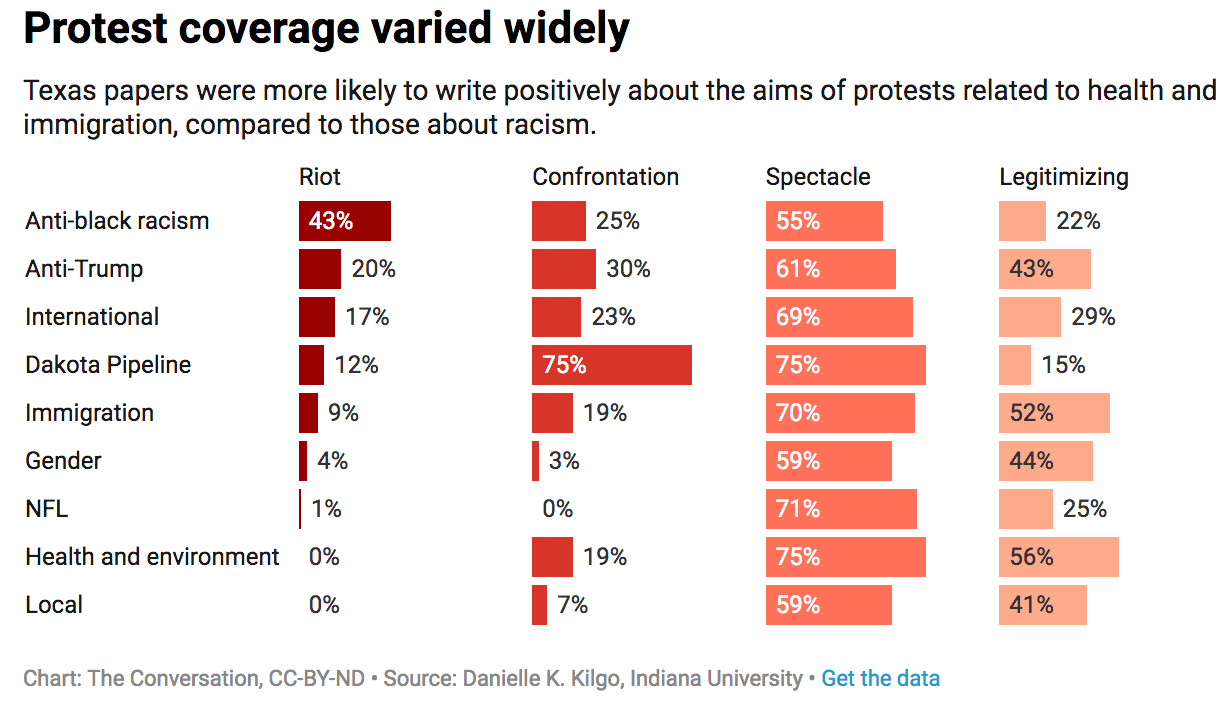 We also kept an eye out for sourcing patterns to identify imbalances that often give more credence to authorities than protesters and advocates.

Overall, news coverage tended to trivialize protests by focusing most often on dramatic action. But some protests suffered more than others.

Reports focused on spectacle more often than substance. Much was made of what protesters were wearing, crowd sizes – largeand small – celebrity involvement and flaring tempers.

The substance of some marches got more play than others. Around half of the reports on anti-Trump protests, immigration rallies, women’s rights demonstrations and environmental actions included substantial information about protesters’ grievances and demands. 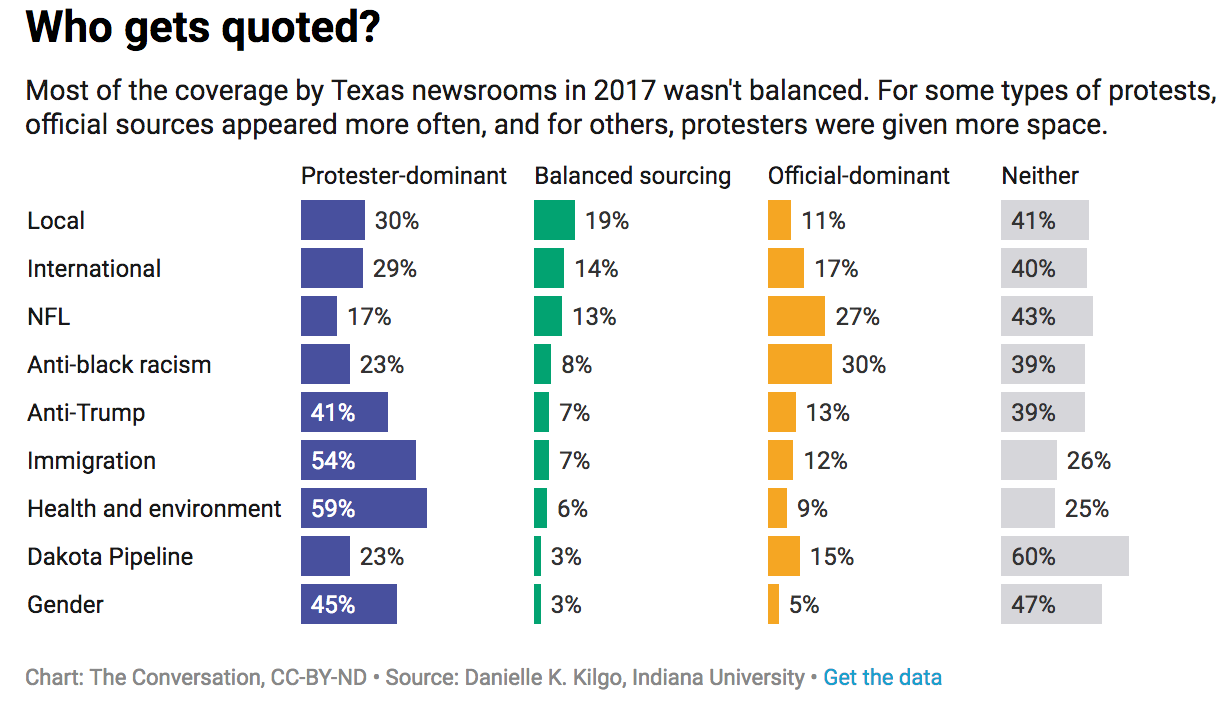 In contrast, Dakota Pipeline and anti-black racism-related protests got legitimizing coverage less than 25% of the time and were more likely to be described as disruptive and confrontational.

In coverage of a St. Louis protest over the acquittal of a police officer who killed a black man, violence, arrest, unrest and disruption were the leading descriptors, while concern about police brutality and racial injustice was reduced to just a few mentions. Buried more than 10 paragraphs down was the broader context: “The recent St. Louis protests follow a pattern seen since the August 2014 killing of Michael Brown in nearby Ferguson: the majority of demonstrators, though angry, are law-abiding.”

As a consequence of variances in coverage, Texas newspaper readers may form the perception that some protests are more legitimate than others. This contributes to what we call a “hierarchy of social struggle,” in which the voices of some advocacy groups are lifted over others.

Journalists contribute to this hierarchy by adhering to industry norms that work against less-established protest movements. On tight deadlines, reporters may default to official sources for statements and data. This gives authorities more control of narrative framing. This practice especially becomes an issue for movements like Black Lives Matter that are countering the claims of police and other officials.

Protests identify legitimate grievances in society and often tackle issues that affect people who lack the power to address them through other means. That’s why it is imperative that journalists do not resort to shallow framing narratives that deny significant and consistent space to air the afflicted’s concerns while also comforting the very comfortable status quo.

This is an updated version of an article originally published on Jan. 16.