Yves here. Even with Covid-19 shaking the economy top to bottom, some trends grind on. For instance, automation is a fetish even when the payoff is questionable. Readers discussed how WalMart intends to eliminate cashiers and replace them with automated checkout, which seems idiotic based on how well they work at CVS (not). I see the cashier have to run over to Do Something to help a customer complete a self-checkout sale at least one time out of three. Moreover, self-checkout promotes theft; the last stats I saw (and I’d be curious to hear if retailers have figured out new counter-stategies) is that shrinkage is about 1% higher in stores with self checkout than not.

I like the authors’ theory of how automation affects employment, but I am much less taken with their claims about offshoring. For one, a lot of jobs offshored are not ones that have been unbundled; a call center worker in India performs the same tasks as ones in the US.

And while we are on the subject of call center workers, my limited sample suggests, depressingly, that companies are using coronavirus as an excuse to degrade customer service even further by shifting more to know-nothing offshored phone reps. It’s particularly offensive to see Cigna pulling this stunt when health insurers are making out well from the coronacrisis.

Understanding the effects of automation and offshoring on labour markets and growth has been a significant topic of interest. This column argues that automation and offshoring fundamentally affect the matching between firms and workers and do so in contrasting ways. It predicts that automation will increase firms’ and workers’ job selectivity and decrease employment, while offshoring will have the opposite effect. Empirical evidence as well as a quantitative model support this hypothesis and provide a mechanism of technological change typically missed in standard neoclassical reasoning.

Automation and offshoring are two contemporary trends that are perceived to have a disruptive impact on several aspects of the labour market, such as employment opportunities or wage inequality, and growth. Understanding their effects, their relative importance, and their possible interactions has been the focus of many influential papers (among many others Acemoglu and Restrepo 2020, Autor et al. 2013).

If we think of automation and offshoring as simply two different types of `technological change’, standard neoclassical reasoning suggests that their effects will not be different from those of previous industrial revolutions. Any improvement in the state of technology leads to an increase in labour productivity. In turn, employment increases as labour demand cannot deviate from the long-run path dictated by the evolution of labour productivity. Concerns about the impact of new technologies can be rationalised only if one departs from the neoclassical paradigm in which any threat to wages and employment may come more from the impacts on the competitiveness of markets in the presence of frictions rather than from changes in the production function in the presence of frictionless markets (Caselli and Manning 2019).

In Faia et al. (2020) we hypothesise that beyond productivity effects, automation and offshoring fundamentally affects the matching between workers and firms. Firms need workers with heterogeneous skills to perform heterogeneous tasks. A match occurs when a firm meets and employs a worker with the appropriate skills. The ideal match delivers the maximum achievable productivity. The productivity of less-than-ideal matches decreases with the distance between the matched tasks (on the firm side) and skills (on the worker side). Matches between firms and workers are not necessarily ideal as search frictions make them less selective, i.e. willing to accept less-than-ideal matches. This is how search frictions induce ‘mismatch’ between tasks and skills, that is, divergence between the actual matches and the ideal ones.

Our key hypothesis is that better matches (i.e. matches that generate larger outputs for a given firm-worker pair) enjoy a comparative advantage in exploiting automation and a comparative disadvantage in exploiting offshoring. As such, automation will increase firms’ and workers’ selectivity, which in turn decreases mismatch and employment. Following the same logic, we predict that offshoring will increase employment by reducing selectivity.

Figure 1 gives a first indication on the interaction of automation and offshoring and their effect on employment using data from the European Labour Force Survey for 13 European countries. Occupations that had a higher probability of being automated (as measured by their routineness) in 1995 experienced a decrease (dashed line) in total hours worked in the subsequent years (1995-2010) as employment shifted from routine to non-routine occupations. This negative relationship is driven by highly offshorable occupations (solid black line), while the change in hours worked seems unrelated to the routine-intensity in low-offshorability occupations (solid grey line). 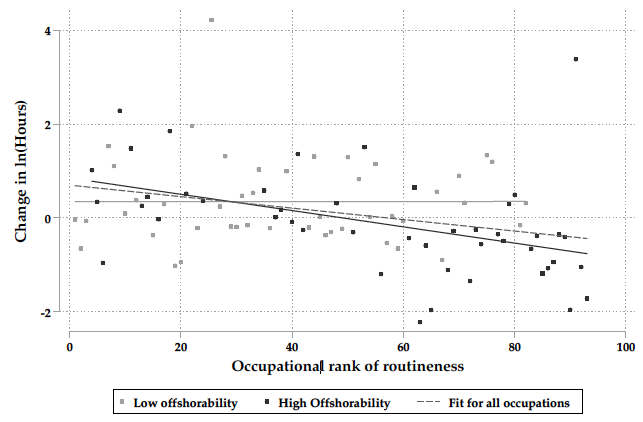 The idea that automation increases the value of the ideal match by making skills and tasks more complementary is motivated by recent survey evidence (2018 Talent Shortage Survey by Manpower Group, 2018). This evidence highlights the increased prevalence of talent shortage with a growing number of jobs left unfilled because applicants are not talented enough for the job. Talent shortage is strongly linked to technology, but does not necessarily depend on a dearth of workers with higher education. Difficulties in recruiting the ‘right man for the job’ tend to be reported in manufacturing, ICT, and health care for jobs such as skilled trades workers, machine operators, sales representatives, engineers, technicians, ICT professionals, and office support staff (Cedefop Eurofound 2018). Machine operators, for instance, are required to have machine-specific experience ranging from the knowledge of production procedures to the ability to understand blueprints, schematics, and manuals. Due to technological change, they are also increasingly required to be familiar with different types of machines, each with its own specific blueprints, schematics, and manuals. A concern for both firms and workers is that retraining from a known to a new machine can be a costly time-consuming process, making them cautious about a potential mismatch.

If automation increases the productivity of ideal matches relative to less-than-ideal ones, it may, therefore, make firms and workers more willing to give up the surplus of a less-than-ideal match and instead wait for a better one. This increased selectivity improves the productive efficiency of matches that are eventually formed and better matches end up commanding a higher wage premium. The result is increased match efficiency together with more unemployment and wage inequality. The type of heterogeneity we have in mind is ‘horizontal’ rather than ‘vertical’ as usually assumed in the literature on skill-biased or routine-biased technological change. While these concepts are very relevant, our paper highlights additional effects of automation and offshoring at work independently from any vertical heterogeneity. As ideal matches are the ones that define firms’ and workers’ core competencies, we use ‘core-biased technological change’ to label the way technology evolves in our conceptual framework.

Differently, offshoring may increase the productivity of less-than-ideal matches relative to ideal ones by allowing firms to unbundle tasks into subtasks to be performed at home or abroad depending on comparative advantages. It may, therefore, make firms and home workers less selective. On the one hand, decreased selectivity reduces the productivity of ‘less-than-ideal’ matches that are eventually formed. On the other hand, match surplus may still increase thanks to specialisation according to comparative advantage. Hence, differently from automation, offshoring may lead not only to higher match productivity, but also to higher employment and less wage inequality.

Whether our theoretical mechanism indeed operates in practice (i.e. whether the mismatch effect is strong enough to reverse the neoclassical conclusions) is in the end an empirical issue, which we investigate focusing on 92 occupations at the three-digit ISCO-88 level and 16 (out of 21) sectors according to the NACE Rev.2 classification from 13 European countries for the period 1995 – 2010. 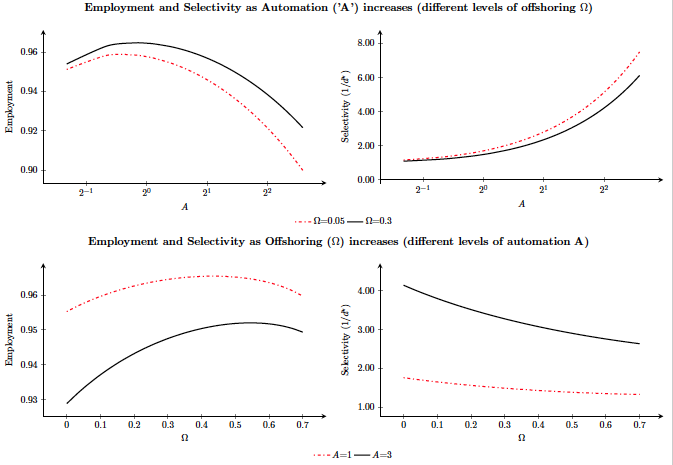 This suggestive evidence is confirmed in our econometric analysis. In line with our model we find that occupations with higher automatability become more selective. This effect is driven by occupations with above-median automatability while there is no impact on selectivity for occupations characterised by below-median automatability. We also find that sectors with higher initial offshorability experience a differential decrease in selectivity. Our results continue to hold when we use more standard selectivity measures borrowed from the literature, such as ‘skill mismatch’ and ‘unemployment duration’.

Growing concerns about the negative impacts of automation and offshoring on employment and wage inequality are well documented. While traditional neoclassical arguments imply that those concerns are unfounded, a negative relation of employment and wage equality with improvements in technology arises naturally in our setting of ‘horizontal mismatch’ where search frictions hinder the efficient assortative matching between firms with heterogeneous tasks and workers with heterogeneous skills. Our analysis in terms of ‘core-biased’ change illustrates a more general idea of how wages and jobs in frictional labour markets may react to shocks beyond our application to technology and offshoring.