When the Financial Times decides to diss a new investment scheme, you know it’s bad. The headline of interest: Rise in Covid-19 bond issuance fans fears over ‘social washing’.

The short version is that opportunists, um, issuers, are taking advantage of the fad among big investors for “environmental, social, and governance” (ESG) oriented investing with the new wrinkle of profiting from the coronacrisis via Covid-19 bonds. Of course, the perps, um, proponents, would beg to differ, arguing that these Covid-19 bonds help fund noble initiatives. But if they are so noble, why do they need a (presumed modest) break on borrowing costs? Why not do it on a straight up charitable basis? Or throw one’s political/lobbying weight behind new government programs?

I’ve long been skeptical of ESG when an old friend who’d just launched a supposedly better program for scoring companies on ESG performance insisted the press was all wrong on the BP Deepwater Horizon disaster because his metrics said BP was an excellent corporate citizen. And I’ve become even more skeptical when I’ve seen it at work at CalPERS. The ESG consultants speak in bafflegab that would put any hedgie or derivative salesman to shame. And ESG is a way for investment-illiterate board members (pretty much all of them) to think they are contributing.

The Covid-19 bonds are sold with often terribly vague promises about Doing Something. From the pink paper:

Since the coronavirus pandemic upended global markets, companies and governments have issued tens of billions of dollars worth of special bonds, including about €60bn in March and April alone, according to Axa Investment Managers.

Many were classed as social bonds — part of a distinct market based on environmental, social and governance principles — while others have been billed as conventional bonds intended to fund spending programmes or strengthen balance sheets during the crisis…

Consistent with our observation that Covid-19 had dented interest in the Green New Deal, floatations of “green bonds” have fallen in 2020 while sales of “social bonds” rose. 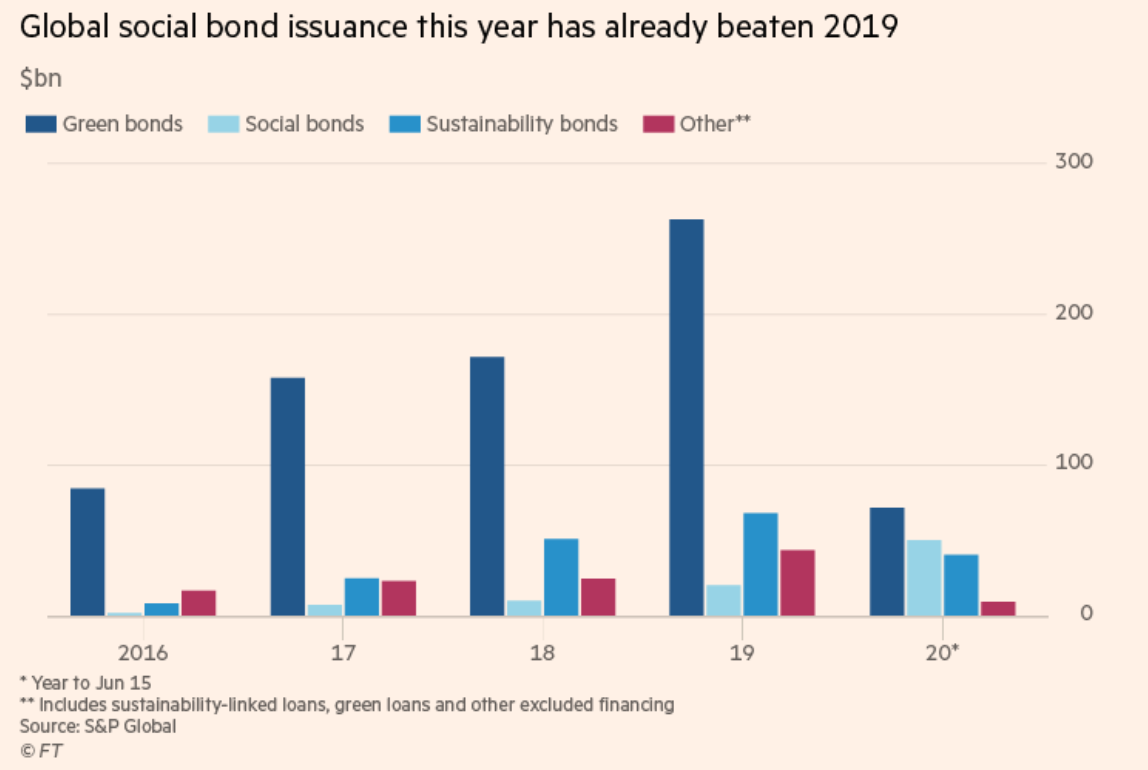 But even rating agencies aren’t keen about what they see:

New York-based S&P Global warned this month about social washing, drawing a parallel to allegations of “green washing” that have dogged many issuers of notionally green bonds in recent years. “[Social] benefits are often more qualitative than quantitative,” said Lori Shapiro, a sustainable finance analyst at the rating agency….

One industry standard for social bonds is a set of principles drawn up by the Zurich-based International Capital Market Association, which requires issuers to identify specific projects with social benefits and then track and report how the money is used.

But compliance with the guidelines is optional and the details are self-selected, notes Tim Conduit, a partner in the international capital markets group at law firm Allen & Overy. As long as an issuer uses the money as it said it would, the only remedy for an investor who considers that the company’s reporting is poor, or who disapproves of specific projects the money is being invested in, is to sell the bond.

“If an issuer has given itself wriggle room then you have to assume that it’s going to use it,” Mr Conduit said….

Drugmaker Pfizer, which issued $1.25bn in 10-year bonds in March, said it aimed to use the money to fund certain “eligible projects” — sustainability initiatives chosen by the company.

But the investor prospectus said that, before allocation, the funds might temporarily be used for “short-term investments” or “to repay other borrowings.”

Axa IM, which considers itself to be on the forefront of ESG investing, examined 25 possible Covid-19 investments and nixed 10 for being too vague.

While it’s useful to see the Financial Times raise doubts about these Covid-19 securities, the general tone was that the sector had not matured, and once better standards and disclosures were in place, they’d be better investments. Needless to say, as we’ve seen with other types of activity, such as housing, finance is an inefficient way to encourage activity. Some of the money raised goes to activity that would have happened regardless, plus whatever incremental activity there is winds up being diluted by virtue of middlemen and advisers being in the mix. But unnecessary complexity and cost is yet another not-so-new normal.