As more and more private equity-owned companies are failing, the great unwashed public is starting to take notice and wonder why. Even before the coronacrisis arrived, the mainstream media was documenting the outsized role of private equity in the bankruptcies of retailers, restaurants, and even stores like Fairway. Sometimes, as with Toys’R’Us, it was too much leverage exacting a toll. In others, it was asset-stripping that increased operating leverage, specifically selling company-owned real estate at inflated priced because it was being leased back at high rent rates.

The Wall Street Journal sets forth some of the reasons why private equity fund managers like Apollo, Blackstone, and KKR don’t ride in to the rescue when companies they have acquired go wobbly.

Not only are the points the Journal makes not entirely accurate, they also manage to skip over the most relevant reasons. And in doing so, they whitewash private equity conduct.

The Journal tries to explain the conundrum of the private equity industry collectively having access to $1.45 trillion of “dry powder,” meaning yet-to-be-deployed investor committed capital, yet standing pat as companies in their funds fail due to coronacrisis revenue hits:

The private-equity owners of some bankrupt companies had no shortage of cash to spend. Ares Management Corp., which bought Neiman Marcus in 2013 alongside the Canada Pension Plan Investment Board, was sitting on more than $33 billion of dry powder shortly before the luxury retailer filed for bankruptcy last month. Ares declined to comment, and the CPPIB didn’t respond to a request for comment.

The big justification for this disconnect is the “going bust” companies are in older funds, while money waiting to be spent is in newer funds, and they allegedly can’t use the new fund money on older deals:

Of all the dry powder in the buyout industry, about 85% is earmarked for funds raised from 2017 to 2019, according to analysis by the investment and consulting firm Cambridge Associates. 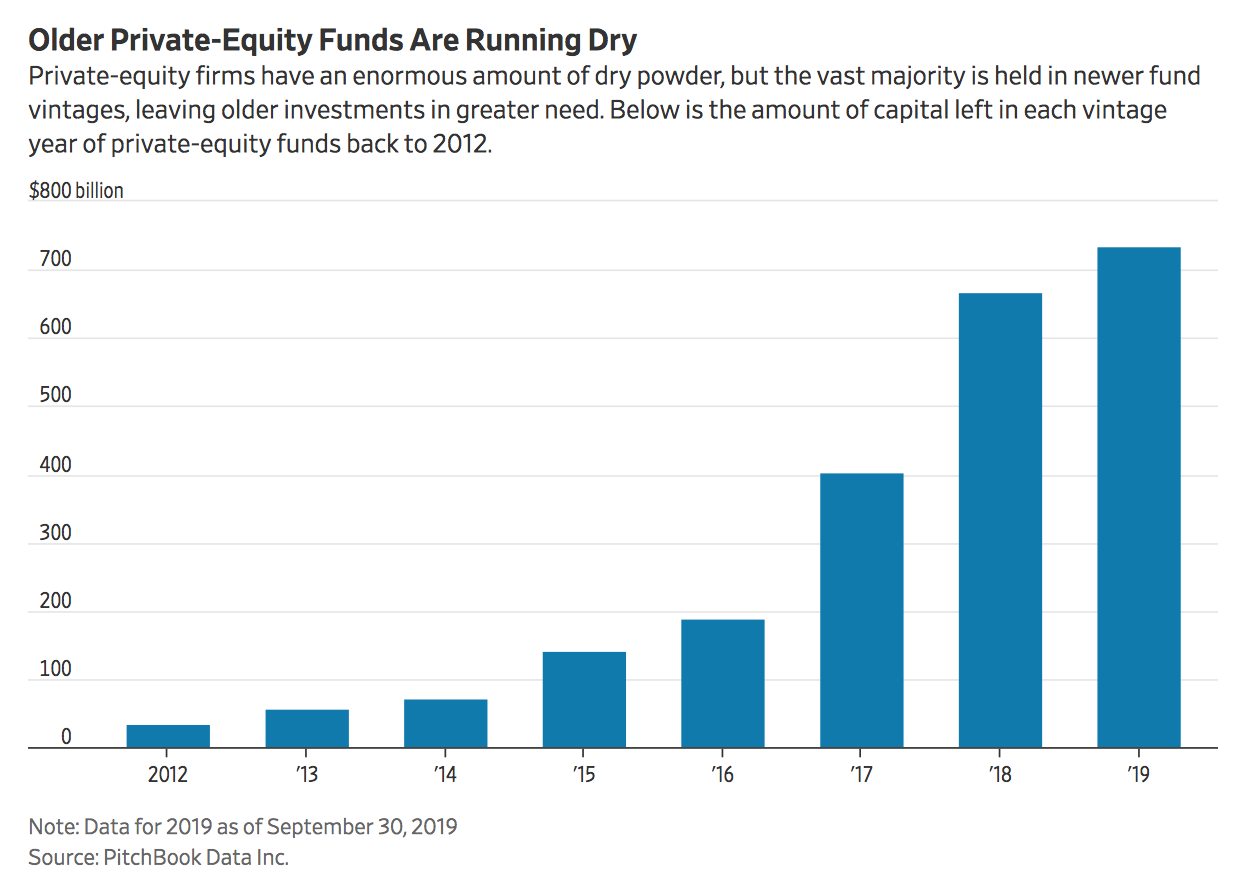 Older funds “sailed right into the Covid crisis without additional capital available to support their companies as easily as the more recent vintage years,” she said.

Without mentioning these contractual provisions, the Journal confirms that managers of multiple funds can and do have newer funds invest in the companies of older funds:

Transactions in which a firm invests in a company it already owns, but from a newer fund—so-called cross-fund investments—were on the rise before the coronavirus struck, and allow private equity to use newly raised money to support older investments. But industry observers have seen little use of this strategy to support struggling companies during the pandemic.

Investor sentiment creates another barrier to using dry powder to keep struggling businesses afloat. Investors in private-equity funds, referred to as limited partners, are rarely enthusiastic about new money being spent to rehabilitate struggling businesses, preferring that managers buy new ones that can be had at cut rates amid a slowing global economy.

“Investor sentiment”? This is laughable. What about “limited partner” don’t you understand? Limited partners have zero say in general partner decision-making. Moreover, they have a well-established history of acting like battered spouses who won’t leave their abuser. We have been chronicling for six years how private equity limited partners are unhappy about the way general partners refuse to disclose how much money they are sucking out of the companies they control. Yet they continue to accept what out to be unacceptable terms, despite the fact that private equity since at least 2006 has not outperformed public equity. There’s no good reason for this misguided loyalty (and we’ve described the many bad reasons, soft and hard corruption being high on the list).

More specifically, private equity funds have the fig leaf of advisory committees, which the general partner stacks with guaranteed not-to-rock-the-boat limited partners like fund of funds that will never vote against the general partner. The Wall Street Journal completely misleads readers with this section:

In a recent poll of limited partners conducted by ILPA, just 10% chose cross-fund investments as the preferred way to preserve value in older companies, among a slate of options Ms. Choi said.

More popular among limited partners, she said, was a practice called recycling, in which the earnings from a successful investment are used to support other companies in the same fund, instead of being immediately returned to investors.

Like cross-fund investments, recycling requires approval from investors, and can sometimes ruffle the feathers of limited partners with their own liquidity issues.

The only “approvals” are by the captured advisory committees. And since the general partners make sure they have comfortably more than 50% of the votes, it isn’t hard to imagine that this supposed limited partner disapproval significantly reflects their antipathy for using newer money to help out older funds.

On top of that, the article also misses a key point regarding “recycling”: that general partners often syphon out excessive funds via paying carry fees on a deal by deal basis. As we’ll discuss more below, general partners realize profits on their better deals early on. And unlike “European” agreements, they can pull out carry fees on a deal-by-deal basis once they’ve met a hurdle rate. However, the profits on early deals can be offset by losses on later ones. The limited partnership agreements provide for “clawbacks” of these overpaid carry fees, but industry insiders report that the general partners never pay the monies back. Instead, they offer a deal on their next fund. Any excessive carry fees should also be available to shore up floundering companies….but private equity general partners reportedly don’t volunteer that they’ve taken more than they should have.

So why don’t general partners try to salvage investee companies that get sick? They have no reason to.

First, as private equity mavens Eileen Appelbaum and Rosemary Batt ascertained, over 60% of the fees general partners receive have nothing to do with the performance of the investment. They get rich whether companies do well or fail.

Second, the general partners don’t care much about fund performance after year 4 or 5 of a fund. The reason is that they have typically raised money for a new fund by then. In other words, what matters (mainly) in fundraising is the early-years performance of the most recent offering. So general partners are highly motivated to realize profits on winners early. And the pervasive use of internal rate of return to measure those results further exaggerates the impact of early realized profits. An extreme case: one fund showed a 77% return when it came time for it to raise a new fund. The final returns on that fund? 11%.

Thus the deals in a fund in its later years almost by definition are mediocre to dogs. And since their crappy performance will come in too late to make a difference in fundraising, the general partner has little motivation to try to salvage them.

We get the final excuse on behalf of private equity, from an industry lobbyist, which is an insult to intelligence:

Even if firms wanted to use newly raised money to prevent an older investment from falling into bankruptcy, they might be limited by fiduciary obligations to investors that committed that money to them, said Brett Palmer, president of the Small Business Investor Alliance.

Oh come on. Fiduciary duty? When private equity firms charge fees without rendering any services, the so-called monitoring fees that Oxford Professor Ludovic Phalippou has called “money for nothing“? Or widespread abuses of private jets? Just check the tail numbers of planes owned by private equity firms and charged to their limited partners and see where they go on Super Bowl Sunday, Valentine’s Day, and around major holidays.1

If the private firms were so big on fiduciary duty, why would they go to such lengths to waive it in their agreements? Provisions that allow general partners to consider interests other than those of their investors are a waiver of fiduciary duty. So are the sweeping indemnification provisions that are pervasive in limited partnership agreements.

In fact, some states like Kentucky have extremely tough, binding fiduciary duty provisions. But as the rampant crooked conduct and abject performance of the Kentucky Retirement System (only 13% funded) shows, the fund managers seemed awfully confident that they’d never be held to account. A lawsuit against KKR/Prisma, Blackstone, and PAAMCO will test that belief.

A final issue is that private equity general partners are not turnaround artists. So their temperament and training would incline them to move on to the next kill rather than try to play Mr. Fixit.

Now admittedly, some companies can’t be saved from bankruptcy and others can be kept out of court only with some painful bloodletting. But you don’t see arguments like that in this piece. Instead, it attempts to justify not trying at all. Wth private equity, the best explanation ever and always is “Follow the money” as in the general partner’s money.
_______

1 The firms piously claim that employees pay for non-business trips. If you believe that, I have a bridge I’d like to sell you.