An important suit, Mayberry v. KKR, alleging breaches of fiduciary duty by certain trustees and executives of the Kentucky Retirement System, along with three famous fund managers, KKR/Prisma, Blackrock, and PAAMCO, who set up customized hedge funds that were sold as providing stellar performance at low risk and turned out to be turkeys, beat a raft of Motions to Dismiss and can now proceed to discovery.

The plaintiffs scored an overwhelming victory despite having the defendants, which included Henry Kravis and George Roberts of KKR, and Steve Schwarzman and J. Tomilson Hill pf Blackrock, who are being sued personally, throw their biggest legal guns at them. The plaintiffs prevailed on every issue, save the inclusion of the Government Finance Office Association, which certified the Kentucky Retirement Systems financial reports, as a defendant. Government Finance Office Association was removed from the case, and all other Motions to Dismiss were denied.

We’ve embedded Judge Phillip Shepherd’s terse order at the end of this post.

One of the reasons it took so long to get to this point wasn’t simply that the plaintiffs are suing a large number of defendants, which meant that their distinct circumstances meant that among them, they could muster a lot of arguments as to why they should not be sued. The defendants filed a Consolidated Motion to Dismiss as well as additional Motions to Dismiss by particular parties. It was also that the defendants effectively ignored the order of battle and submitted voluminous pleadings that made extensive factual as well as legal arguments.

As you can see from Judge Shepherd’s ruling, he analyzed the arguments, as is required at this phase of the litigation, taking the factual claims made by the plaintiffs in their most favorable light. Not only did the strategy of trying to plead the case prematurely fail, it backfired, since the defense has already exposed a considerable amount of its case prior to discovery. As a seasoned litigator put it:

I think that this is a pretty solid ruling, although anything can happen on appeal. The Kentucky Supreme Court will have to be pretty awful to overturn this well-reasoned decision. Remember, in a Motion to Dismiss, the factual presumptions are in favor of the plaintiffs. In order to overturn Judge Shepherd, the Kentucky Supreme Court would effectively have to rule that there is no remedy for breach of fiduciary duty by a pension trustee.

One of the problems that the defendants have is that they used up all their powder on the Motions to Dismiss — and the plaintiffs did a terrific job of rebutting their defenses.

On top of that, some of the specific arguments on which the defendants lost bode ill for private equity and hedge fund managers generally if the plaintiffs ultimately prevail. Specifically:

Statute of limitations. The alternative investments industry is hoist on its secrecy petard. One of the legal arguments for dismissing the case was that the statute of limitations has passed. The judge threw out that claim because the plaintiffs (eight individuals in their dual capacities as Kentucky Retirement System beneficiaries and Kentucky taxpayers) could not know about the abuses at each of the three customized funds due to the secrecy about fees, costs, and performance (case citations not in the narrative excised for convenience):

Defendants argue that Plaintiffs claims are time-barred, at least in part, because a five-year limitation period applies to breach of fiduciary duty and breach of trust claims, while a one-year statute of limitations period applies to conspiracy claims….Thus, Defendants argue, the Court must dismiss any
breach claims and related aiding and abetting claims arising prior to December 27, 2012 and any conspiracy claim arising prior to December 27, 2016. Plaintiffs, on the other hand, argue that (1) KRS 413.160 applies and allows for ten years to file “an action for relief not provided for by statute” (i.e., breach of trust) and (2) regardless, each violation constitutes a new cause of action under Tibble v. Edison International, 135 S.Ct. 1823 (2015); and (3) tolling doctrines, such as the adverse domination theory and equitable tolling, apply.

The Court finds that there are sufficient allegations to overcome the statute of limitations defenses for purposes of these Motions to Dismiss. For example, the plaintiffs allege that the compensation of the hedge fund sellers was grossly excessive and breached fiduciary duties to the remained secret and sealed from public disclosure. See First Am. Compl. ¶¶ 239–43 (discussing excessive fees). To the extent that the defendants may have received excessive compensation in breach of fiduciary duties, and that compensation has not yet been fully disclosed, the statute of limitations may not have even started to run, since a limitations period cannot run before the plaintiffs were reasonably on notice of the nature and extent of the breach of duty.

Discovery is the Wall Street defendants’ worst nightmare, because all of their phony “trade secret” claims that blew-up in their faces on the statute of limitations are now going to be exposed as nothing but an artifice to cover-up unjust enrichment and fraud. They’re going to start throwing huge sums of money at the plaintiffs in hopes of avoiding discovery.

Excessive compensation constituting a violation of fiduciary duty by fund managers. That point is made in passing above and comes up again:

At this time, the Court finds that the First Amended Complaint contains allegations sufficient to imply a common law fiduciary relationship between the Hedge Fund Seller Defendants and KRS and its members. See, e.g., First Am. Compl. ¶ 183 (referencing “superior knowledge and expertise” of the Hedge Fund Seller Defendants, KRS’s dependence on said expertise, and Defendants’ knowledge of that dependence). The Complaint also contains sufficient allegations of a breach of those fiduciary duties. For example, Plaintiffs reference the massive fees collected by these defendants in breach of the common law fiduciary duty to not charge excessive fees. See id. ¶¶ 239–243. After factual discovery is completed, those allegations may be disputed or disproven. At this time, however, without full disclosure of all fees, costs, and other expenses related to the management of these hedge funds, the Court cannot dismiss these defendants.

This is deadly if the plaintiffs prevail. If the hedge fund fees are deemed to be excessive, private equity fees and costs are even worse. How about what is typically double dipping on transaction fees and financing fees, where the fund managers hire investment bankers to do the work, and then levy comparable fees of their own for baby-sitting them? Or monitoring fees, which as Oxford Professor Ludovic Phalippou put is, is “money for nothing”? Mind you, not every jurisdiction has as strong-form a version of fiduciary duty as Kentucky. But the flip side is that one of the bedrock duties of a trustee is to evaluate the costs and risks of the investments they make. Perilous little of that seems to have happened in private equity and hedge fund land.

Personal jurisdiction The hedge funds argued that the court only had jurisdiction over the specific legal entities that managed the hedge funds, not the parent companies or executives like Henry Kravis and Steve Schwarzman. The judge took the view that the plaintiffs had made a strong enough case that they could be subject to the authority of the Kentucky courts to let them be included in discovery. As with others issues, Judge Shepherd left open revisiting the defendants’ arguments based on evidence.

However, in the voluminous pre-ruling back and forth, the plaintiffs showed that in SEC filings, KKR and Blackstone had defined the “we” they used throughout the filings to include the hedge fund operations. For instance, from the April 26 Plaintiffs’ Companion Memorandum in Opposition to Defendants’ Motions to Dismiss: 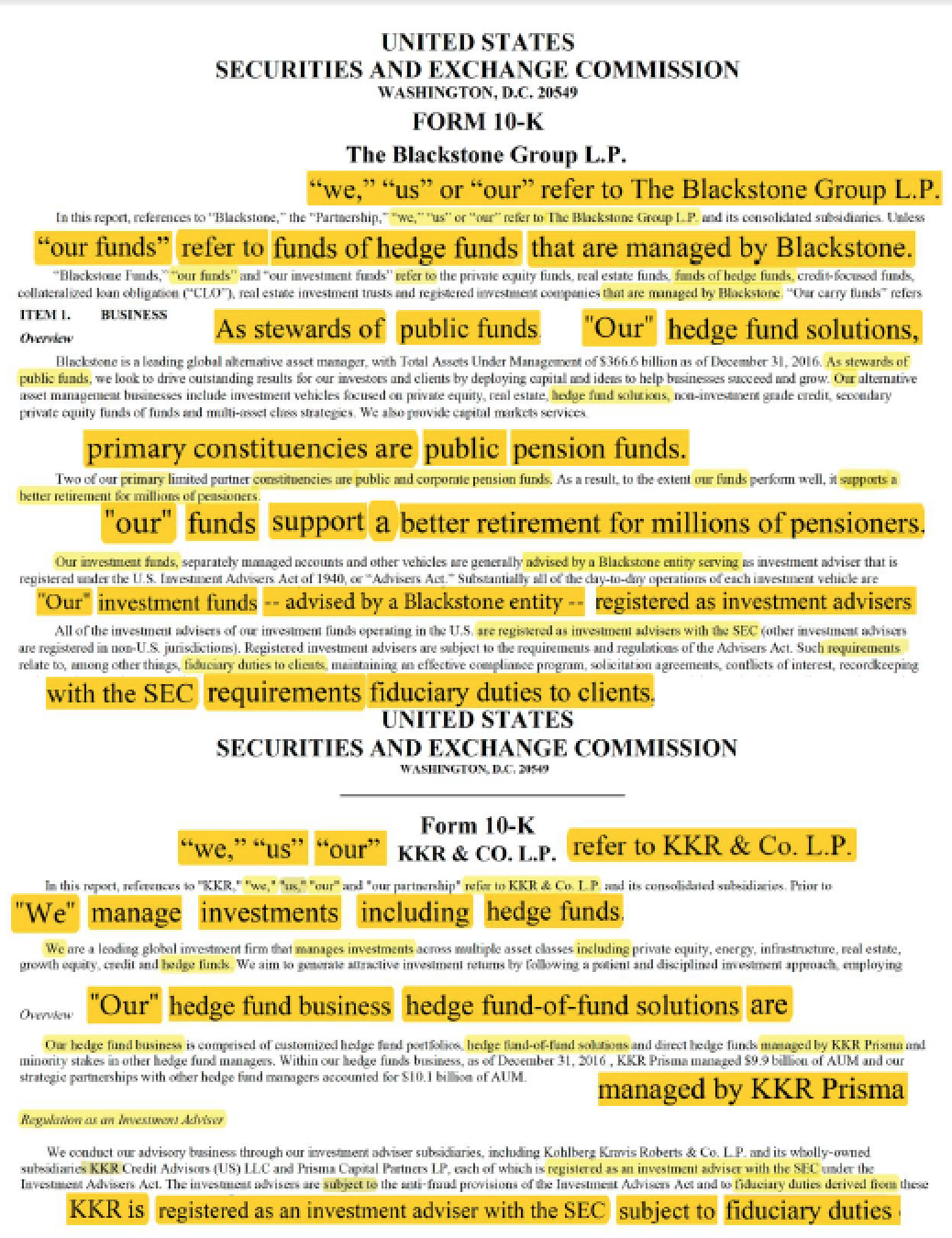 And even though Kravis, Roberts, Schwarzman and Hill probably regard this suit as an offense, the plaintiffs now get to poke about in their file cabinets. Recall that Facebook’s Sheryl Sandberg claimed to have no knowledge of Facebook’s oppo against George Soros, when it turned out she launched part of it. These kingpins might not be as far removed from what went on in Kentucky as they’d like to believe.

As you can see in the second embedded document, the hedge funds attempted to used their contacts as an argument in their defense even though it was premature to do so. The plaintiffs already took a first crack at it. This line of argument has the potential to do great damage to the way that alternative investment managers have cowed their clients into thinking they have waived protections that cannot be waived because they are statutory. The limitation of liability provisions they rely upon look to be at least inconsistent with and may well be void under both the 1940 Advisers Act and Kentucky law. This will be a groundbreaking issue in this case.

If the plaintiffs prevail, other funds will recognize that they can threaten or even void these agreements. The leverage of hedge and private equity fund managers believe they have in disputes with pension funds would be materially weakened.

The plaintiffs plan to prosecute the case vigorously. Given the potential to set important precedents, and the demonstrated effectiveness of the plaintiffs’ attorneys in presenting complex factual and legal arguments, which would be particularly important in a jury trial, I don’t expect them to settle. And the track record of one of the lead attorneys, Ann Oldfather, is that she greatly prefers to take cases the full distance. So expect to be passing popcorn as this litigation proceeds.