Yves here. I suppose I should not be surprised to see that Biden is such a heartless pol that he could stare down someone who was dying and has had to spend too much of his precious remaining time fighting with insurance companies to defend private health insurance. And the bought and paid for loyalty of people like Biden means that if we ever get an expansion of public healthcare, every effort will be made to crapify it so as to make private coverage look not so terrible by comparison. 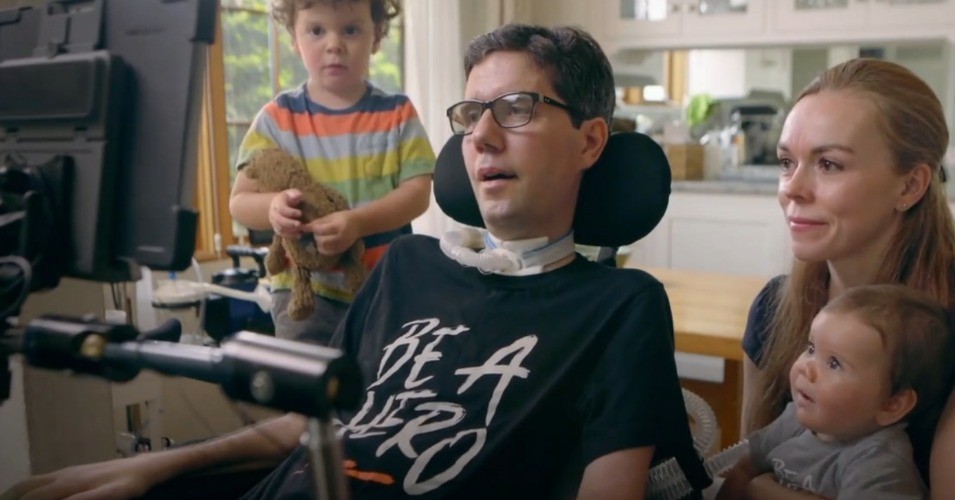 Medicare for All advocate Ady Barkan along with his wife, Rachael, and his two young children Carl and Willow, as they speak via conference with presumptive Democratic Party presidential nominee Joe Biden and his wife, Dr. Jill Biden. (Photo: Screengrab/BeAHeroFund/NotThisNews)

After studiously avoiding a face-to-face interview during the Democratic presidential primary, presumptive nominee Joe Biden finally agreed to answer questions from Medicare for All advocate Ady Barkan, a progressive activist who suffers from the terminal and degenerative disease known as ALS.

In a video of their exchange posted online Wednesday, the former vice president defends his commitment to the nation’s private insurance industry and says that while “he fully gets” why so many people are fed up with for-profit insurance companies and the employer-based coverage—and even amid a raging pandemic that many argue has further exposed the system’s cruelty and inefficiencies—he still remains steadfastly opposed to Medicare for All as a viable alternative.

“It’s no secret that I support Medicare for All,” says Barkan about mid-way through their exchange to which Biden interjects: “I don’t.”

During the primary, Barkan was able to interview most of the top Democratic contenders—including Medicare for All champion Sen. Bernie Sanders (I-Vt.) and Sen. Elizabeth Warren (D-Mass.), who Barkan later endorsed—but Biden refused to accept repeated invitations.

Finally given a chance to challenge the former vice president with pointed questions on the subject of healthcare, Barkan asks Biden: “Do you see a future where health insurance is no longer tied to employment? Will America ever have a single payer system where health care is guaranteed as a human right?”

“Health care guaranteed as a human right,” Biden responds, “but taking away the right to have a private plan if you want a private plan, I disagree with.”

Surprise! Joe Biden and I disagree about #MedicareForAll.

But I know that we will win our struggle to guarantee health care as a human right someday very soon. pic.twitter.com/QJxC1FlqgU

Healthy California Now, which advocates for both Medicare for All and a state-based single-payer solution, lamented that Biden—”running for president during a global pandemic and economic collapse”—had the ability to look Barkan “in the eye” and tell him “flippantly” he opposes Medicare for All, “the only compassionate and efficient solution” to the national crisis.

While Biden repeats that he believes healthcare “is a right, not a privilege” several times, Barkan presses him on specific features of the private insurance industry and the frustrations of navigating it as a terminally-ill person in the United States.

“Vice President, I hope you understand this issue is personal for me,” Barkan says. “This isn’t abstract or theoretical. When I say I’m Medicare for All advocate, I hope you understand it’s because I’ve spent hours on hold with insurance companies when they won’t cover the cost of my care. It’s because I’ve had to sue insurance companies when they tell me I need to pay thousands of dollars out of my own pocket for the cost of full-time care. And I have a great private insurance plan.”

“I understand what you are saying about keeping private plans,” Barkan continues, “but I guess my question is, what does preserving private insurance really do for people?”

Progressives and human rights advocates, however, continue to ask if Biden really does get it.

If you truly believed health care is a right & not a privilege, @JoeBiden, you would support guaranteeing coverage to everyone regardless of their ability to pay. No premiums. No deductibles. No co-pays.

Will you start supporting Medicare for All? Or are your words empty?

Instead of Medicare for All, Biden has pushed for expanding the Affordable Care Act (ACA), passed under the Obama administration, by adding a public option, further subsidizing “Gold Plans” on the private market, and adding home care costs to benefits that could be covered.

Experts and economists have long argued that simply adding a public option or other tweaks to the private system will never achieve the kind of efficiencies, universal coverage, and cost-savings that a Medicare for All system would achieve.

Watch the full interview below:

Barkan said in a tweet that while he and Biden “have meaningfully different perspectives on the world,” he was glad to hear the Democratic nominee out and also issued an official endorsement for his candidacy. During the interview, Barkan told Biden he was “fully committed” to seeing President Donald Trump defeated in November.

Despite Biden’s refusal to embrace Medicare for All, said Barkan, “I left the conversation knowing that putting him in the White House is a critical step in our struggles for justice.”