Lambert here: No, not that contagion. (A fine example of social media “incentivising street protests that spread across borders” is the K-Pop international fan base intervening in the United States in favor of “Black Lives Matter.” A less obvious example is a global spread of tactics fueled by YouTube and other video platforms: Ukrainian trebuchets redesigned for Hong Kong’s materials; images Hong Kong’s phalanx formations redistributed in the United States.)

History provides examples of media incentivising street protests that spread across borders. The popular discontent that ended communism in Eastern Europe began in Poland in the early 1980s and swept through the region. Radio Free Europe played a critical role as a vehicle for the spread of the information about protests and catalysed its spillovers across borders (Puddington 2000), as did a network of radio stations of the Catholic Church (Stehle 1982).

Fast forward 30 years to the wave of street protests that sparked the Arab Spring in 2011 following the death of a Tunisian street vendor who set himself ablaze – after having been harassed and humiliated by municipal officials (Baldwin 2011). These events established social media as the new medium for the spread of protests. In 2019, a second wave of protests that started in Soudan and Algeria spread to other Arab countries including Egypt, Lebanon and Iraq; eventually resulting in a global contagion of protests spanning from Chile to Russia to Hong Kong.

In our recent research (Arezki et al. 2020), we explore spillovers of spontaneous street protests across countries, with social media acting as the catalyst. We use data on non-violent and unorganized demonstrations, as well as their coverage in news media, for 207 countries for the period 2000 to 2020. Social media penetration in the source and destination of protests leads to protest spillovers between countries.

Protests are defined in the dataset as “non-violent demonstrations, involving typically unorganized action by members of society”. This category covers peaceful protests, protests with interventions (e.g. arrests), and protests in which excessive force was used against protesters (e.g. causing injuries and deaths). This definition does not include violent demonstrations and mob violence.

We construct an alternative measure of protests capturing the intensity of media chatter around protests. The rationale for the news-based measure of protests is that it allows us to significantly expand the scope of the data on protests over space and time. The news data are from Dow Jones FACTIVA, which is a global repository of over one billion articles published across the world and reported in 28 different languages.

The news-based protest data provide us with a balanced panel for 207 countries. The evolution of the measure is presented in Figure 1 in monthly frequency (top panel). We also illustrate the evolution of the measure for Middle East and North Africa countries (bottom panel). Both panels show a clear uptick in the chatter about protests around the Arab Spring in 2011 and the second wave of protests that started in 2019. The uptick in the top panel around 2003 reflects global protests against the war in Iraq. 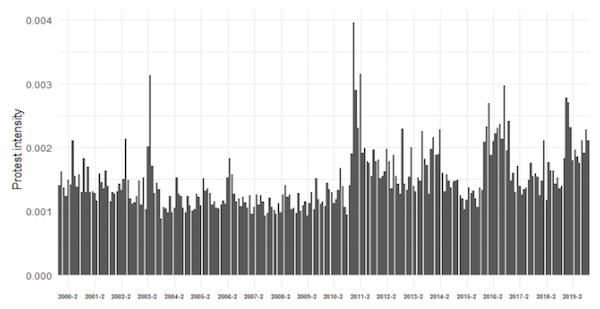 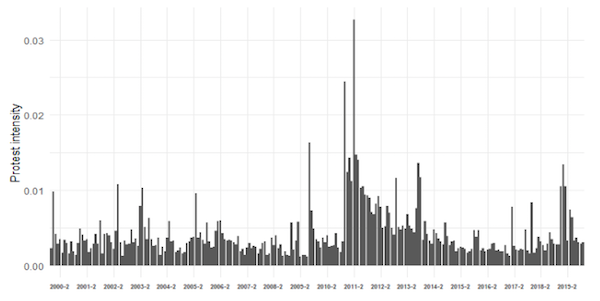 We use the number of Facebook subscribers as a fraction of the population to capture social media penetration in a country. Among different platforms of social media, Facebook accounts for the lion’s share in pretty much all world regions.

Social media make it much easier for protesters in one country to raise their voice, and for sympathisers in other countries to read, learn and emulate. The results suggest parallel learning between streets of nations alongside the previously documented learning between governments.