Yves here. Even though this post discusses why the UK’s renters have retreated from the plan to hold a rent strike, many of the power dynamics it describes in the landlord-tenant relationship hold true here, particularly when trying to secure a new lease. UK renters seem to have wound up in a similar position to Americans, of having evictions suspended, here due to the CARES Act moratorium, which expired at the end of July, the UK due to courts being shuttered.

Note that in the US, how quickly evictions proceed is a function of the strength of renter rights as well as court backlogs. In some jurisdictions, evictions are swift, while in New York City, even in normal times, they take six to nine months. But a key issue, which is implicit in this article, is that the power of the landlord is the rest of the legal regime. For instance. Germany has strong tenant protections because cheap housing was seen as an important element of Germany’s economic strategy: rentierism by landlords translates into higher living costs, which means workers need higher wages, which results in higher product costs. That’s not conducive to being an export superstar.

One would think that landlords would now accept reduced, even considerably reduced,  payments given the poor prospects for finding decent tenants at anything approaching old normal lease levels. But property owners can be good at denial. I’ve seen retail spaces in New York City go vacant for well over a year due to landlords sticking to unrealistic rent rates.

By Jacob Stringer, a housing researcher and campaigner, and a member of London Renters Union. Originally published at openDemocracy 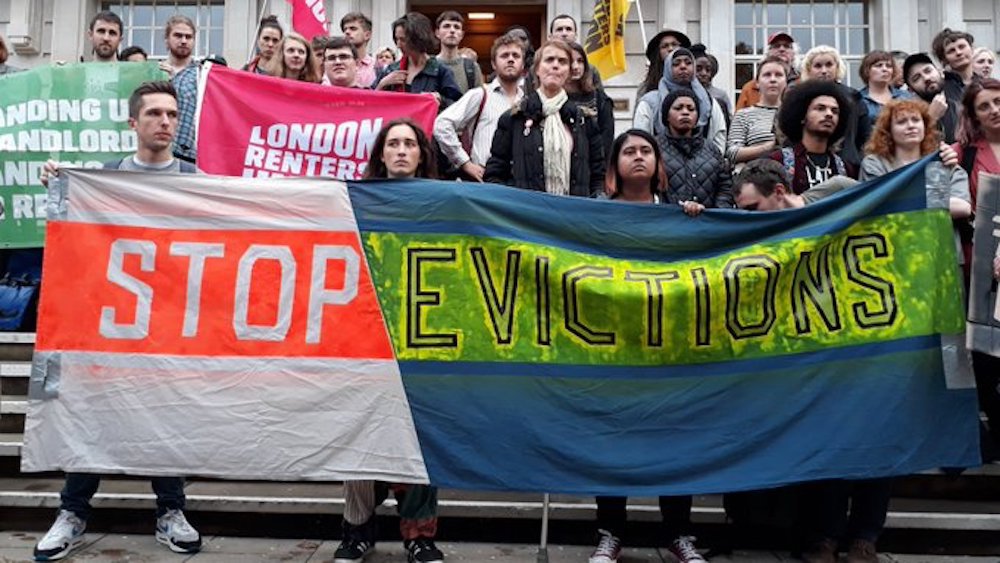 There was a moment, just after the declaration of lockdown, with the immediate loss of jobs and hours, when it seemed that a rent strike might be inevitable. Many members of London Renters Union thought there might finally be a moment of unity between renters affected by the pandemic that could be leveraged into much greater power against landlords. When evictions were temporarily suspended some members grew even more excited: for once private renters did not have the sword of Damocles hanging over them. This was the moment to strike! Others had a similar idea and Rent Strike London was launched, pulling ahead of London Renters Union, necessarily slower-moving as a large democratic organisation. For a week or two it felt like we might get the biggest rent strike going in British history.

But that wasn’t what happened. Some months later, London is not on rent strike. In fact London Renters Union (LRU) decided not to call its campaign a rent strike, instead going with ‘Can’t Pay Won’t Pay’, a slogan with a venerable history that is deliberately less aggressive. Meanwhile Rent Strike London has only a few hundred people signed up to their campaign, despite the fact that the rent strike had to happen to some extent, just because many people had to stop paying rent. The involuntary rent strike is very much on, and both campaigns in London are supporting these people. The LRU ‘Can’t Pay Won’t Pay’ campaign has four thousand people signed up – good but a long way short of the numbers needed to build the idea of a city-wide rent strike. The union conceived of the campaign as a way to spread non-payment far enough to become a political issue, and eventually force the government to concede the demands of the campaign, including cancellation of rent debt and, as a wider demand, introduction of rent controls. But a political programme can only unfold from a high level of non-payment, and agitators for a rent strike in the renters union had to moderate their positions as, via phonebanking and an online survey, they went through the process of speaking to struggling members.

The reason the rent strike has not taken off can be summed up in one word: fear. Private renters in London have learned to fear their landlords, even when courts are closed and possession orders can’t be issued. In the same way that fear of the boss at work can be qualified by the notion that ‘you can just get another job’, fear of the landlord is qualified by market relations that say there is always the option to move house. But one of the many problems of London’s exploitative rental market is that it isn’t that easy to move. On benefits? Forget it, says the letting agent. Low income? Give us six months rent up front. Pets? Nope. Children? We’d rather not. No good references? You deserve the street. Visa documents? Too much trouble to check. Poor credit? Don’t waste our time. You want the ‘luxury’ of a sitting room for your family? With your income you’ll get cockroaches with that.

Many LRU members need to stay in their area for job or community reasons and aren’t confident of finding another place. Many facing rent shortfalls were concerned their tenancy would not be renewed, or that eviction would immediately follow the end of lockdown. Some couldn’t risk their current home because it was slightly below market rent and they couldn’t afford more. Some had more people in the house than were on the tenancy, making collective action more complicated. Some were on Universal Credit and worried about the landlord reporting them. Some were worried that when it came to look for a new place the landlord would sabotage their references. Some had no tenancy because they lacked the documents to get one. Some had ‘no recourse to public funds’ so couldn’t count on official help if made homeless.

At the root of most of the concerns is the continued existence of Section 21 (no-fault) evictions, which can be enacted at the end of a fixed-term contract or any time during a rolling tenancy. The government have promised to abolish Section 21 but are moving slowly on it, and have specifically ruled out the possibility of moving more quickly as Covid-19 evictions loom. In the meantime eviction is a constant possibility for most renters, either now or at the end of the tenancy. Many people have experienced powerlessness in the face of a landlord’s vindictiveness, and vindictiveness was exactly what people expected if they went on rent strike. Section 21 makes all private renters in Britain precarious. A temporary suspension of evictions assuaged almost no-one’s fears.

An important part of the difficulty of rent striking is that, unlike in many countries, few people in London live in blocks owned by the same landlord, so instead of being able to switch the balance of power through a rent strike, most people must strike alone against a landlord who has the power to make them homeless. A rent strike, historically, usually means a specific thing: many people with the same landlord withholding their rent at the same time. What some had dreamed of happening during the pandemic is what we might call a ‘general rent strike’ against all landlords, transforming itself into a political movement. But this would require a very rare unity of thought and action among a large number of people that neither the two-year-old London Renters Union, nor any other organisation, has yet had the time to organise.

London Renters Union has sometimes said, provocatively, that ‘There’s no such thing as a good landlord’. Some people love that statement, other people think of landlords who’ve been nice to them and object. Landlords hate it. What the statement means is that the power imbalance between landlords and renters in the UK is so great that exploitation is always present, and the potential for abuse is just around the corner. A friend of mine had a landlord who until recently was friendly enough and did all the repairs on time, then just before the pandemic struck she had a baby. The landlord immediately began to complain about ‘increased wear and tear’ on the flat. With the tenancy heading for renewal just as lock-down was starting, he tried to increase the rent. When my friend resisted, he gave notice to a new mother in the middle of a pandemic. Even ‘good’ landlords take more of your income than you can afford, but they are also just one fit of irritation away from becoming bad landlords, because the laws are so weighted in their favour. There are many stories of evictions following requests for basic repairs. Blatant discrimination against welfare recipients among others, is standard, and even the minimal standards that exist for rental accommodation largely go unenforced.

The resistance to changing the situation is predictable. Even as they promised to scrap Section 21, the government said they would simultaneously strengthen Section 8, the section of the law that lists legitimate reasons for eviction. This already has reasons that landlords can turn into loopholes, such as the landlord being able to claim they want to move into the flat. Similar clauses in the United States are routinely abused by landlords with no intention of moving in (who actually monitors the next resident?) and the reason that hasn’t been abused in the UK is probably because Section 21 is easier.

It seems likely the new Section 8 will have loopholes that will still give landlords a fairly free hand to evict. This is the type of thing you expect when so many MPs are also landlords. Tony Blair spent his years in power building up a buy-to-let portfolio. The Conservatives have even more landlord MPs than Labour. Even when the MPs and peers aren’t landlords themselves, we know that their friends are: that’s the strata of society most of them come from. The ‘market’ in housing in fact creates a relationship of power between the asset owner and the renter. The landlord-tenant relationship opens up a clear divide between those in control and those without control. Alas many middle class people are now invested in this relationship of domination.

If domination seems like a strong word, consider that even with the fear of eviction temporarily removed, renters in London are scared of their landlords. There are, it should be said, other factors making rent striking in this moment tricky: it is difficult to build solidarity when you can’t meet people. Zoom calls and Whatsapp conversations are not conducive to a culture of creative action. Isolated and destabilised in lockdown it can be difficult to channel anger into collective channels – that was why Black Lives Matter protesters had to ignore the lockdown rules. Yet it feels like the result would have been the same even if renters could have met face to face. The power of landlords is so great that people have found it difficult to imagine triumphing over them.

All the more reason then to open up the next front in the battle as courts re-open. As we approach the end of the evictions pause on 24 August and the end of the furlough scheme in October, the true impacts on housing security are about to make themselves felt. Private renters expect to face the biggest evictions crisis of our lifetimes, and the need for organisations like London Renters Union, ACORN and Living Rent in Scotland is ever more apparent. The government will not protect renters, so tenants unions are preparing themselves for eviction resistance and for standing up to the ruthlessness of landlords. Private renters may not have the upper hand yet, but we can make it clear that the power of landlords will not go unopposed. If enough people join in with eviction resistance over the coming year we can get the voice of private renters heard, and we may just begin to change the balance of power between renter and landlord.