Yves here. Forgive us for proving up Godwin’s law with our choice of post. In all seriousness, however, in the wake of the financial crisis, some economists warned that stagnant and falling living standards historically led to a political move to the right, and would support the rise of a radical right. That has come to pass in Europe and the US. So the notion that austerity played a role in the Nazis coming to power is no surprise. However, this post shows that the areas of Weimar Germany that suffered the most distress, and in particular, showed the biggest increases in mortality, showed the most pronounced shifts towards the Nazis. Yet most of America looks at deaths of despair and shrugs, or worse, blames people in flyover for not learning to code.

Many Western countries pursued deep austerity measures in response to debts from the financial crisis of 2007-2008, and may again do so in the wake of COVID-19 stimulus packages. This column reviews how in the early 1930s, austerity measures worsened social suffering and contributed to political unrest paving the way for the rise of the Nazi Party in Germany. The authors argue that the absence of a coherent response to social suffering from the Weimar government worsened the slump, contributing to the radicalisation and polarisation of the German electorate.

Many pages have been written about what drove Hitler to power. While economic factors (from the Great Depression to high unemployment rates) and socio-cultural conditions (arising from the oppressive measures in the Treaty of Versailles) played an indisputably important role, the rapid rise of the Nazi Party is still, nearly a century later, a topic of considerable debate (Adena et al. 2015, Doerr et al. 2018, Eichengreen 2018, Ferguson and Voth 2008, Satyanath et al. 2017, Voigtländer and Voth 2012, Voth 2020).

In our recent work, we show how fiscal austerity contributed to Nazi electoral success in the early 1930s (Galofré-Vilà et al. 2020). Localities that experienced larger declines in spending and higher rises in taxes had higher vote shares for the Nazi Party in each and every German federal election between 1930 and 1933.

Fiscal policy at the time can was implemented through a series of emergency decrees, largely circumventing parliament, and they were introduced with the knowledge that they would cause enormous hardship. Chancellor Heinrich Brüning hoped that international media reports of German suffering would lead the international community to relax debt and reparations obligations on an economical prostrate Germany. Yet, as Hitler foresaw in June of 1931, “[t]his emergency decree will help my party to victory, and therefore put an end to the illusions of the present system”.1

The Impact of Austerity on Electoral Outcomes

Between 1930 and 1932, in the middle of the Great Depression, Brüning cut spending, increased taxes and rolled back the social safety net. Real expenditure was cut by 8% and central real expenditure by 14%. Relief payments and unemployment benefits were limited, social overhead expenditures faced the axe and government salaries were reduced. The impact was substantial in many respects, since government spending was already around 30% of GDP in 1928. Tax rates were also raised, hitting the lower income tax brackets the hardest in percentage terms. Rising numbers of Germans faced economic insecurity and marginalisation at a time when they needed it the most. Instead of an expansionary fiscal policy to combat the depression, Germans were forced to rely on an increasingly exclusionary and exhausted system of relief.

Could these austerity measures have contributed to radicalization of the electorate? And, if so, did this happen by disenfranchising the ‘squeezed’ middle classes? We test both these hypotheses using data from official German statistics from over a hundred cities and a thousand smaller districts in the period covering the four elections between 1930 and 1933. Overall, we find that areas more severely affected by austerity had relatively higher vote shares for the Nazi Party. Models controlling for other explanations for the Nazi’s success, while including city and election fixed effects, show that each one standard deviation increase in the depth of austerity was associated with between a two and five percentage point increase in vote share for the Nazis or, equivalently, between one quarter to one half of one standard deviation of the dependent variable (Figure 1). We also find that tax hikes correlate positively with Nazi electoral success. These results are robust to a range of specifications including an instrumental variable strategy and a border-pair policy discontinuity design.

We also investigated alternative explanations. The most prominent of these is, of course, ‘pocket-book voting’: the rise of the Nazi’s came simply from the economic downturn. Importantly, we can differentiate party votes in the data. As shown below, most of the shift in political support associated with austerity came from the Centre Party (which was Brüning’s party) transitioning to the Nazi Party. Moreover, none of the other main parties of the German political spectrum (including the German National People’s Party, which was another party with a far-right ideology) gained votes that could be linked to austerity. The worst off economically, the unemployed, turned not to the Nazis but to the communists. This is consistent with the notion that those just above them in the economic hierarchy, who had more to lose from the tax hikes and spending cuts, favoured the Nazis when their party failed to provide them economic relief. 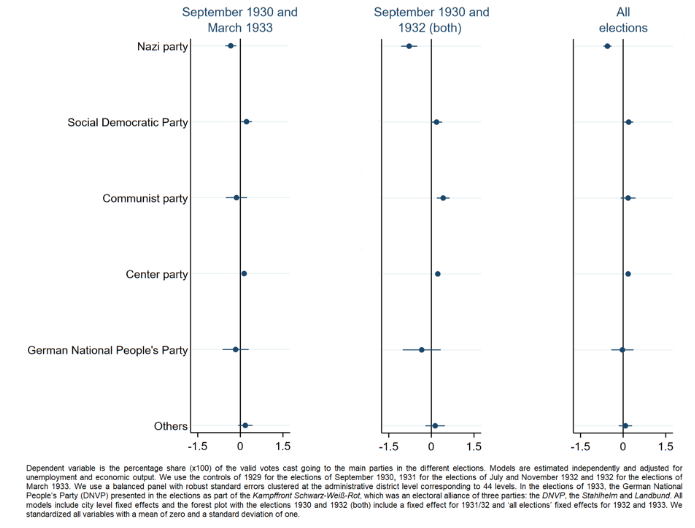 We also study the impact of austerity on Nazi electoral gains in relation to different types of expenditure. Here we find that most of the electoral impact of austerity was driven by cuts to social spending on health and housing, two of the budget lines severely affected by austerity. These cuts in social spending plausibly exacerbated the suffering of many Germans. Indeed, we find that the localities experiencing relatively severe austerity experienced relatively high suffering (measured by mortality rates) and electorates in these areas with higher mortality were often more likely to vote for the Nazi Party. This is in line with the views of commentators at the time. For instance, by the fall of October 1930, Hjalmar Schacht (former head of the Reichsbank) gave an interview to the American press warning that “if the German people are going to starve, there are going to be many more Hitlers” (The New York Times, 3 October 1930).

The demise of Weimar Germany and the rise of Nazi fascism reveals that too much harsh austerity can trigger social unrest and unintended political consequences. Even after correcting for alternative explanations, including the economic downturn, it is clear austerity played a critical role. Our findings are consistent with the hypothesis that austerity led to substantial human suffering and exacerbated inequality and inequity. At a time when people needed the most from their government, the government failed them, and they were lured by the siren calls of radical populist parties.