The Wall Street Journal describes tonight how the line between two tiers of the Covid economy isn’t as tidy as many might think. It isn’t just hourly workers in service businesses like restaurants and hotels who are seeing smaller or even no paycheck. High income professionals are also in distress due to having relatively high level of borrowings which makes them vulnerable to declines in income.

We warned early on, as did a Bloomberg story in June, that layoffs would increase higher up the job ladder as it became more evident that Covid-19 damage was not just severe but long-lived. From the Bloomberg account (note the chart is interactive, so go to the original story if you’d like to play with it):

The pandemic isn’t finished with the U.S. labor market, threatening a second wave of job cuts—this time among white-collar workers.

Close to 6 million jobs are potentially on the line, according to Bloomberg Economics. That includes higher-paid supervisors in sectors where frontline workers were hit first, such as restaurants and hotels. It also includes the knock on-effects to connected industries such as professional services, finance and real estate. 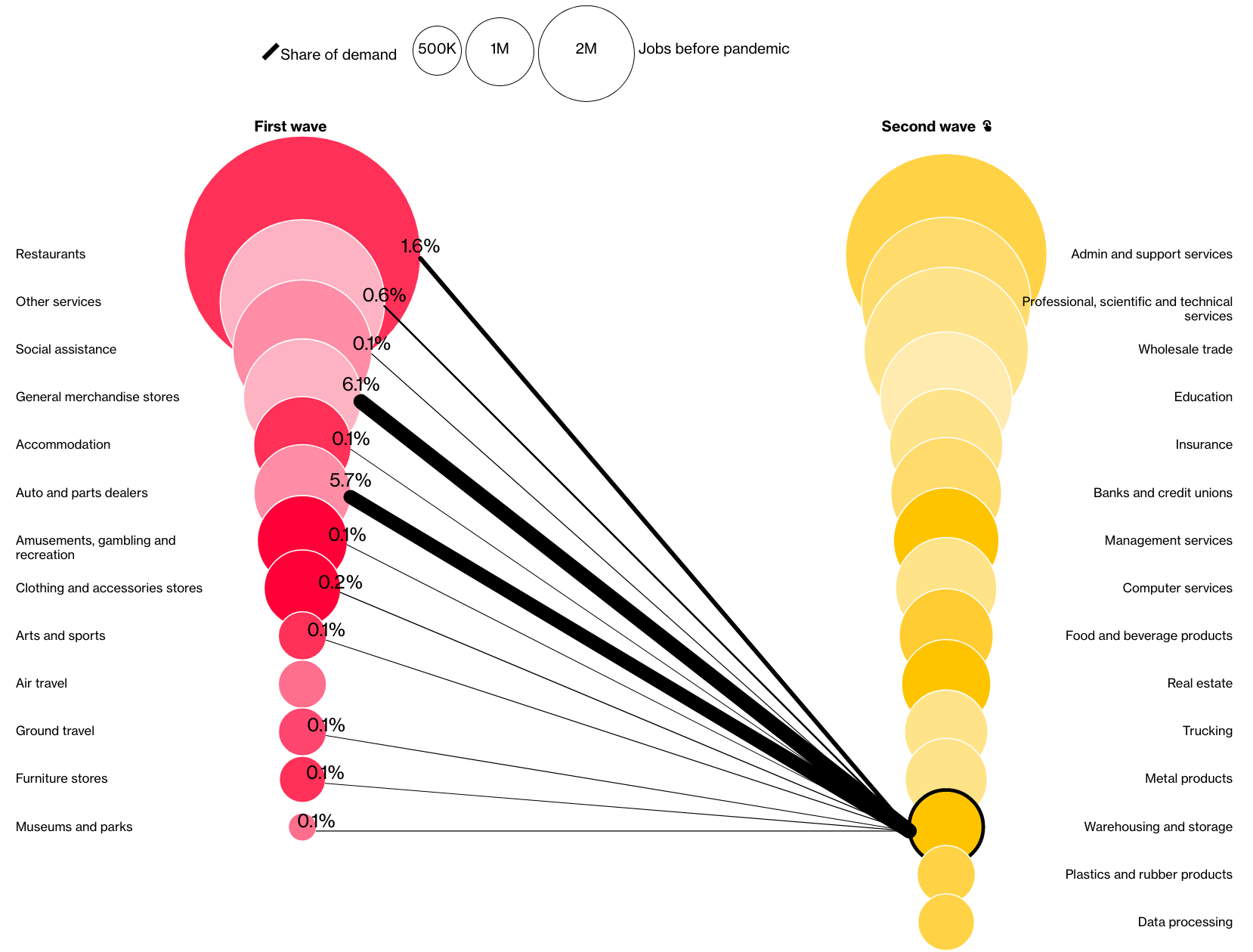 And the Bloomberg analysis found that these “second wave” losses would have a disproportionate impact:

While not as high in number as the initial wave of layoffs, the second round will still pack a sizable economic punch, as it will include middle-class Americans who drive discretionary spending, a major growth engine.

An additional issue, which this article does not address directly, is that work both at the high end and the low end has become specialized. When manufacturing was much more important to the economy, employers expected to train new hires, although they would often require a basic level of mathematical and reading skills. Today, even fast food outlets prefer to hire front line and managerial personnel with industry experience. In The Predator State, Jamie Galbraith argued that having a society invest heavily in conferring advanced degrees was not a plus. The cost of that education, in terms of the resources involves as well as the student foregoing wages in order to earn the degree, is high. Yet by investing in that training, those students have chosen to limit their career opportunities, which may not be a good bet in the long haul. If employment contracts in your field and you are one of the ones who winds up earning less or losing a job entirely, the immediately available replacement is usually at a much much lower skill level, where to add insult to injury, employers will worry that the displaced professional is overqualified and won’t stick around long. And getting established in a new field takes time and often involves spending on new training….and that self-reinvention process may not work.

Richard Vague in particular has been inveighing on the dangers of private debt, particularly household debt. Even so, the data in the Wall Street Journal article is sobering:

American families with nonhousing debt making over $98,018 a year in pre-tax income owed an average of nearly $92,000 of such debt in 2016. That’s up 32% from 2004, adjusted for inflation, according to an analysis of Federal Reserve data by the Employee Benefit Research Institute, a nonpartisan nonprofit research group. 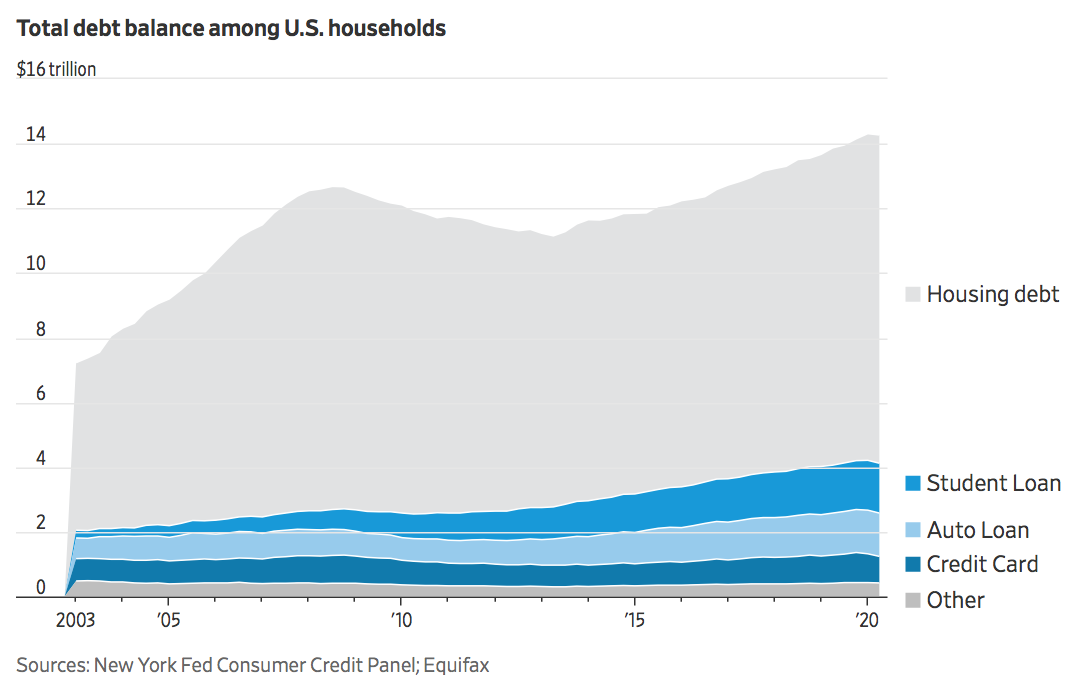 The article points out that overall credit card debt declined after the onset of Covid. The $600 a week unemployment supplement provided enough income support, combined with the fall in spending due to limitations on activities that some were able to pay down debt. But averages conceal subpopulation. Again from the Journal’s story:

The coronavirus has spared few industries and expanded unemployment benefits designed to replace the average American income didn’t cover all the lost pay of higher-earning workers, especially in or near expensive cities. The extra $600 weekly payments expired in July, putting them even further behind.

“What I see happening here is a core assault on successful college-educated families, which are the new breed of middle-class American families,” said Anthony Carnevale, director of the Georgetown University Center on Education and the Workforce. “There’s a professional workforce that’s getting slammed.”

Roughly six months into the pandemic, many lenders that let borrowers skip monthly payments now expect to get paid again. They have set aside billions of dollars to cover potential losses on soured consumer loans—an acknowledgment that America’s decadelong debt binge has come to an end…

Unemployment for the arts, design, media, sports and entertainment was 12.7% in August, more than triple its year-earlier level. In education, it more than doubled to 10.2%. Sales and office unemployment was 7.8% in August, up from 3.8% in August 2019.

Architects and engineers, who earn $1,826 in average weekly pretax income, well above the $1,389 average among full-time wage and salaried workers, have seen unemployment rise to 3.7% from 0.8% a year earlier. Unemployment for computer and math occupations, which earn $1,919 a week on average, more than tripled to 4.6%.

It could get worse. “The pain so far in the economy has largely been at the lower end of the pay scale,” said Discover Financial Services Chief Executive Roger Hochschild, adding that many of “the white-collar layoffs are still to come.”

And overall demand for higher-paid professionals is softening as lower-paid jobs are coming off their lows:

By some measures, the outlook for higher-earning workers appears worse than during the 2008 financial crisis. In August, about 3.3 million people age 25 and over with bachelor’s degrees or higher were unemployed, up from 1.2 million in February, according to the Bureau of Labor Statistics. During the last downturn, that number peaked at about 2.2 million.

Postings for jobs with salaries over $100,000 were down 19% in August from April, while postings for all other salary categories increased, according to job-search site ZipRecruiter Inc….

Many people who have jobs are struggling with pay cuts. As of August, 17 million workers were getting paid less due to the pandemic, said Mark Zandi, chief economist at Moody’s Analytics. Some 9.5 million took pay cuts; the remaining 7.5 million are working fewer hours, he said.

The Journal presents anecdotes, and some families were carrying such high debt levels that they were vulnerable to any bad development, such as a New York couple earning $175,000 annually with monthly debt payments of $9,000. But others didn’t have crazy fixed costs when the downdraft hit:

Terri Smith, 64, said her job analyzing legal expenses for her employer was eliminated in a round of cost-cutting. Even with the extra $600 a week, unemployment didn’t cover her lost earnings, and she is now down to $285 after tax in weekly unemployment benefits.

The monthly mortgage payment on her Charlotte, N.C., home is $1,550, she said. Her car payment is $550. Health insurance costs $600 a month, and a recent hospital visit cost $7,500 in out-of-pocket expenses. She has dipped into savings to keep up with bills and is thinking about withdrawing from her 401(k) or signing up for loan-deferment programs until she can find a job.

Needless to say, the disconnect in Versailles, um, Washington, is striking. The longer relief is delayed, the more lasting damage will occur.